2022 Contractor of the Year: Future Looks Bright For Utah Contractor

At 100 years old, Jacobsen Construction shows no signs of slowing down. A stalwart of the Utah construction industry, Jacobsen had its best year yet in 2021, with the firm earning record revenue of $740 million from projects across the U.S. More than $585 million came from projects built in the Mountain States, an increase of 25% from 2020. And if the firm meets its overall 2022 projected revenue of $900 million plus, it will keep breaking records.

This growth trajectory is one of several factors contributing to the firm’s selection as ENR’s Intermountain Contractor of the Year, its second such recognition in the last decade.

Headquartered in a new 63,000-sq-ft home near Salt Lake City International Airport, the builder maintains a leading presence in institutional and public markets such as health care, government and education, balancing those sectors with a diverse portfolio of private-sector work. 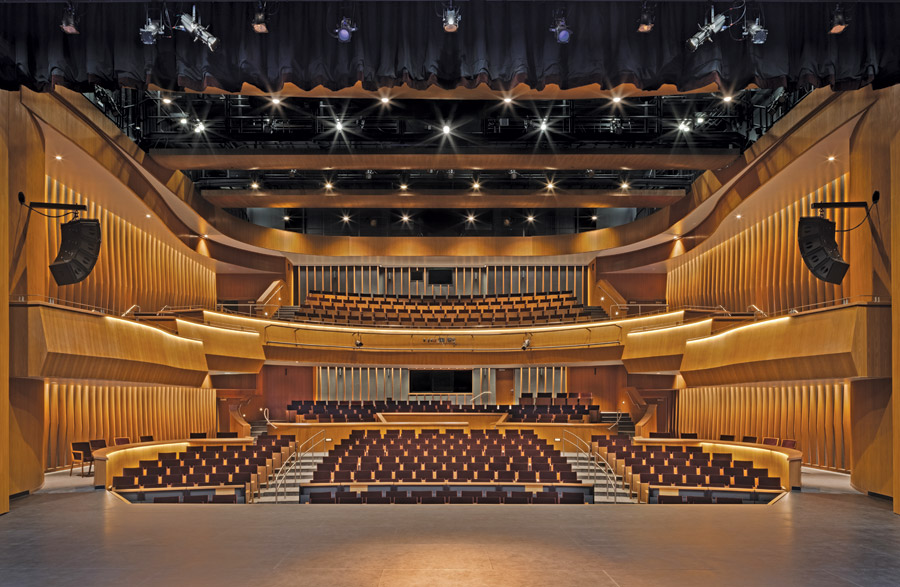 That includes a growing resume in multifamily housing and mixed-use developments in addition to a long history of delivering projects for the Church of Jesus Christ of Latter-Day Saints. That relationship helped facilitate the firm’s expansion into Hawaii more than two decades ago, where Jacobsen serves clients out of its Honolulu office. The firm’s newest office is in Phoenix.

“Our future looks bright,” says Dennis Cigana, chief development officer. “The question is, what’s going on out there with the economy?” He says he’s confident that the firm’s diverse portfolio will help see it through its next century, regardless of market conditions.

He says the firm’s strong roots and ethics are critical to its success, adding it was ingrained in the firm by its founder, Soren Jacobsen, a Danish millwright apprentice who immigrated to the U.S. in 1900. Jacobsen eventually relocated to Salt Lake City, starting the company in 1922 and adding sons Ted and Leo as partners (Ted assumed the role of firm president in 1974). Following the retirement of Doug Welling, the firm is currently led by CEO Gary Ellis. Cigana himself is a 23-year veteran of the firm, adding the company made a positive early impression on him by “how they treated all the people within,” which was soon solidified as the firm transitioned its ownership to an employee stock ownership program. The evolution to a 100% ESOP structure was formalized in 2006. 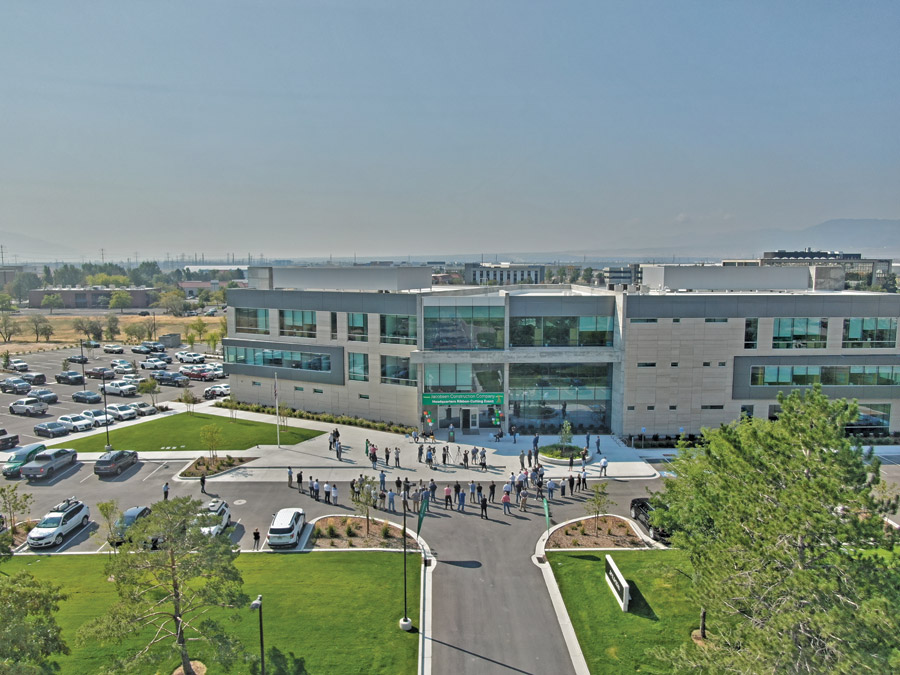 “We’re all owners of the company and feel strongly of doing the right thing to make sure that owners and clients are successful,” he says, also noting the ESOP’s value as a recruiting tool because it includes everyone, including craft employees. “It’s just really awesome to see that everyone benefits from it … not just the executive level. It’s everyone’s company.”

Building out an overall projected backlog of $2.6 billion requires a lot of resources, and a crucial part of the firm’s strategy includes “making sure we have the right team that can build these projects,” Cigana says.

It also means that while the firm continues to look for new work, it can be selective in the projects it pursues and take advantage of growing markets such as multifamily housing, currently a hot market in Salt Lake City.

“During the Silicon Slopes boom, prior to the pandemic, we were doing a lot of office buildings along the I-15 corridor,” Cigana says, adding the firm’s transition to this market led to its selection as the builder of some of Salt Lake City’s most high-profile projects.

This includes Astra Tower, a 40-story, LEED-Gold-targeted luxury residential apartment tower located in the heart of Salt Lake City’s central business district. Under construction since 2021, it will be Utah’s tallest building upon its opening, scheduled for 2024. The company also is well underway on the West Quarter, which will bring 737,000 sq ft of residential, hotel, retail and entertainment space to an entire block in downtown Salt Lake City at full build-out. 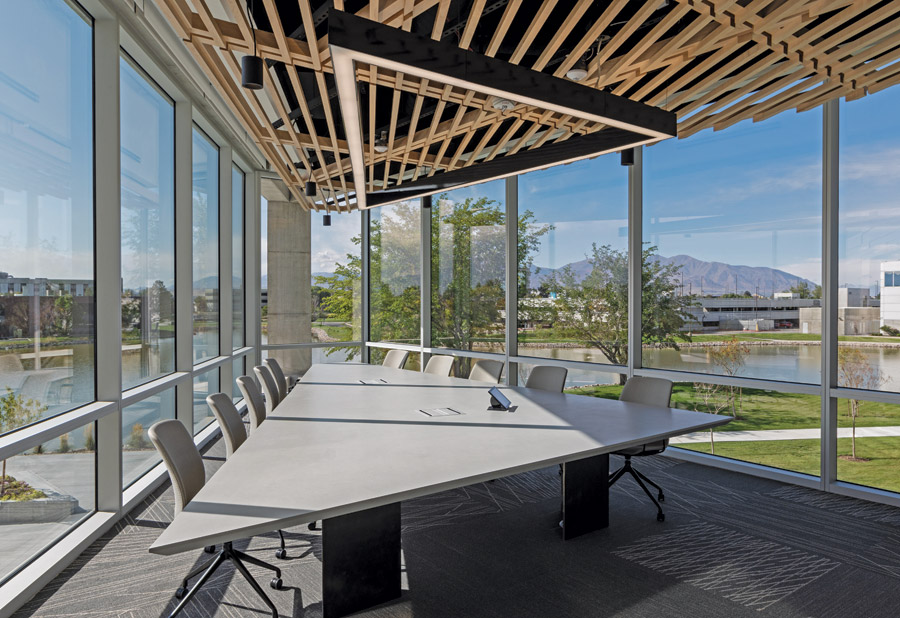 The firm’s long history of building religious projects has been a key market for Jacobsen. The contractor has worked on 33 LDS temples around the world and is currently delivering projects in Virginia and Pennsylvania in addition to several ongoing projects in Utah. Jacobsen is constructing a complicated seismic upgrade at the Salt Lake Temple, a National Historic Landmark, as part of a larger project by the church that includes extensive renovations to Temple Square.

Additional opportunities for staff to travel for projects come from its National Select team, which also supports an ongoing relationship with U.S. Federal Properties Co., a developer serving the U.S. Veteran’s Administration. Crews are wrapping up medical office projects for the VA in Corpus Christi, Texas, and Phoenix as part of that team.

A sense of security about Jacobsen’s future also comes from its repeat client rate of 80%. One of those longtime clients is Primary Children’s Hospital, which has multiple campuses and is part of Intermountain Healthcare, a Utah-based nonprofit health care organization operating in seven states. The hospital also serves as the pediatric specialty teaching hospital for the University of Utah School of Medicine in Salt Lake City.

Katy Welkie, the hospital’s CEO, says she got to know Jacobsen during a complicated multistage remodel of an outpatient services building on its Salt Lake City campus, a project the firm originally built.

“They’re very considerate, and they are very respectful of the patients and the family members,” says Welkie, adding that safety and consistency is crucial to working seamlessly on an occupied and highly active campus. “It doesn’t matter which partner or subcontractor they’re bringing in, they clearly have a way of communicating throughout their entire team.” 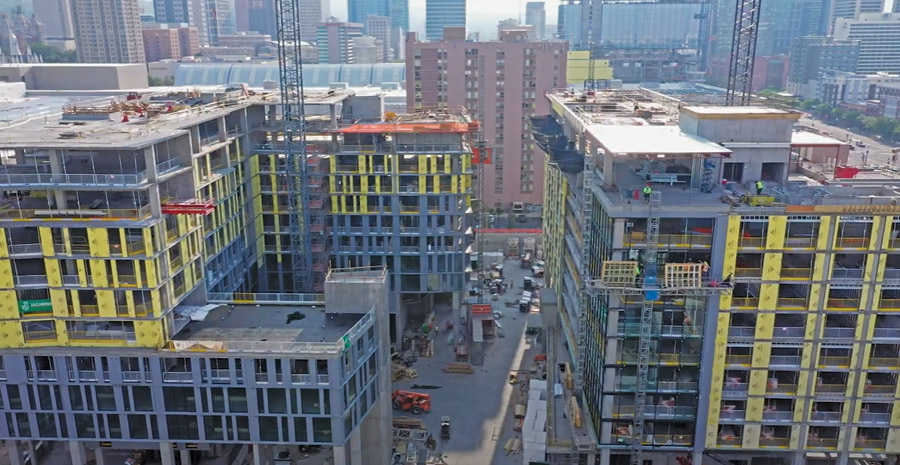 A view of the West Quarter project in downtown Salt Lake City in August 2021.
Photos Courtesy of Jacobsen Construction

The firm tackles a wide variety of projects for the organization. “It may not be the largest project, but because of who we’re building it for, it really means a lot to us,” says Cigana.

And there are large ones too, including the 486,000-sq-ft pediatric hospital Jacobsen is building at PCH’s Lehi campus, scheduled to open in early 2024. Welkie says Jacobsen’s value-engineering expertise makes it a good partner in meeting the project’s $208-million construction cost, doing so “without sacrificing the experience and the quality of what we’re trying to achieve.”

The firm’s commitment to the community is another way the firm stands out in Welkie’s mind.

“Philanthropy is a really important part of children’s hospitals,” Welkie says, adding, “I give them great credit for their flexibility and allowing us to design ways of engaging our donors at the site. It’s made such a difference in the ability to engage.” 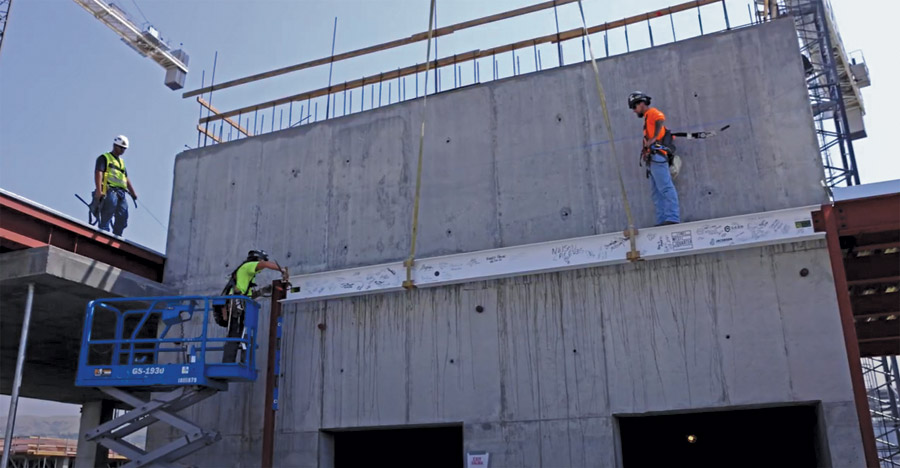 Crews assist during the topping out ceremony at the West Quarter.
Photos Courtesy of Jacobsen Construction

While the firm is in a strong position within current market conditions, Cigana says its leaders never stop looking for ways to operate more efficiently.

“Because of the material constraints and price hikes, as well as a tight labor market, there really hasn’t been any shortages of challenges for contractors,” Cigana says.

Most of the firm’s work is at-risk, though it does have one design-build project underway—a 520-unit student housing project at the University of Utah. Cigana says those delivery methods allow Jacobsen to collaborate with the design team to provide cost certainty and schedule opportunities.

“We’ve really leaned on our planning and organization prowess, which has allowed us to see far ahead and make adjustments that protect the schedule and the cost of our projects,” he says.