This website requires certain cookies to work and uses other cookies to help you have the best experience. By visiting this website, certain cookies have already been set, which you may delete and block. By closing this message or continuing to use our site, you agree to the use of cookies. Visit our updated privacy and cookie policy to learn more.
Home » Messer Named Midwest Contractor of the Year
MidwestMidwest Construction Companies
Top Contractors | Midwest Firm of the Year

Cincinnati-based Messer Construction Co. has earned Midwest Contractor of the Year honors on the strength of the firm’s commitment to safety, community and diversity—and its slate of interesting projects.

Messer was founded in Cincinnati by Frank Messer in 1932. The company spent its first years focused on public works, with projects such as the central post office in Nashville, the public library in Toledo, Ohio, and several schools in the Cincinnati area.

Ninety years later, Messer has transformed into an employee-owned company, has expanded to 10 regional offices (a total of six in Ohio, Indiana and Kentucky) and has grown its 2021 revenue to $1.1 billion.

The company works in the aviation, health care, higher education, industrial and science technology sectors. It also has customers in community and nonprofit, culture and entertainment, government and civic, multifamily, mixed-use and workplace, senior living and athletics.

One of the largest single projects in Messer’s recent portfolio is its work on the Cincinnati Children’s Hospital Medical Center Critical Care Building, which was the largest private development in Cincinnati’s history.

The 650,000-sq-ft building has an additional 26,000 sq ft for parking, room for 249 new patient beds, a 90,000-sq-ft emergency department, a new pharmacy, a neonatal intensive care unit, bone marrow transplant center and complex airway space. Messer served as the construction manager and finished the job in November 2021, several months ahead of schedule. 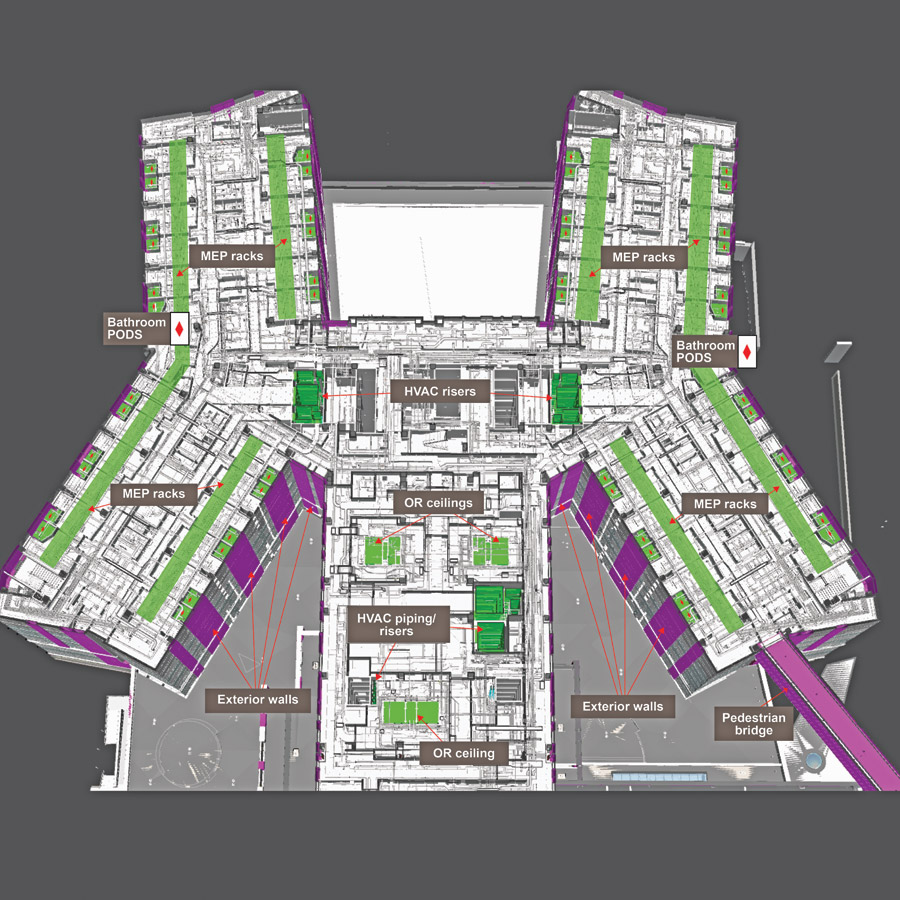 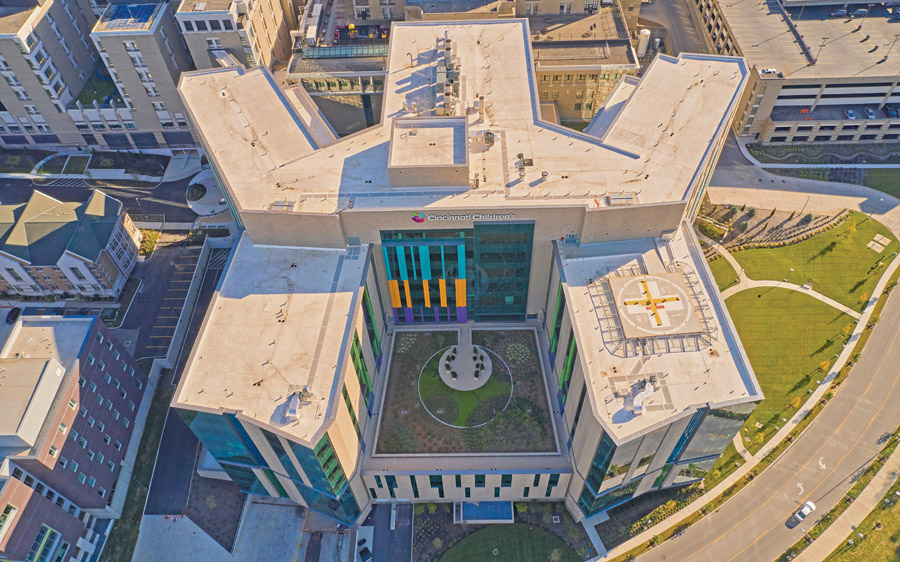 Pete Bergman, vice president of operations for Messer, says the company was challenged early on to meet a tight deadline.

“Shortly before construction started on Cincinnati Children’s Critical Care Building, and well before

COVID became part of the equation, hospital leadership asked if it would be possible to finish four months early so that high-risk patients could be in the new building ahead of peak flu season,” he says. “Integration with the design team, prefabrication and flow scheduling were crucial to achieving that aggressive schedule goal and had the added benefit of requiring fewer people on site at a time when social distancing was paramount.”

Prefabrication was used on construction of a 100-ft-long pedestrian bridge that connects the new Critical Care Building with an existing building. Prefabrication was done on everything for the bridge except glass along the sides.

“This environment requires constant, open communication about costs as they stand each day so we can lay out a plan for success.”
—Steven Bestard, Senior Vice President/COO, Messer

The biggest challenge of constructing the bridge, according to Bergman, was aligning it between two buildings that were at different angles to each other.

Messer utilized laser scanning to ensure the bridge, which had been constructed on the ground, fit perfectly.

“Laser scanning was extremely helpful because if we’re off by even a fraction of an inch, that’s a big problem,” he says.

The bridge fit after “one very successful crane pick,” according to Bergman. He adds: “[When] you came to work on Friday, [the bridge] was on the ground, then if you came by on Sunday, it was up.”

Messer also employed flow scheduling to break down the project into 60 manageable tasks. Workers moved from one flow area to the next, week-to-week, which allowed them to spread out and be socially distanced during the height of the pandemic.

Oliver Rhine, vice president of strategy and planning at the hospital, says Messer’s commitment to teamwork, particularly during such tricky times as fitting the bridge, helped the project go smoothly. “Their approach and commitment to collaboration aligned, inspired and brought out the best in everyone involved,” he says. “Multiple parties quickly became one team with a shared purpose.” 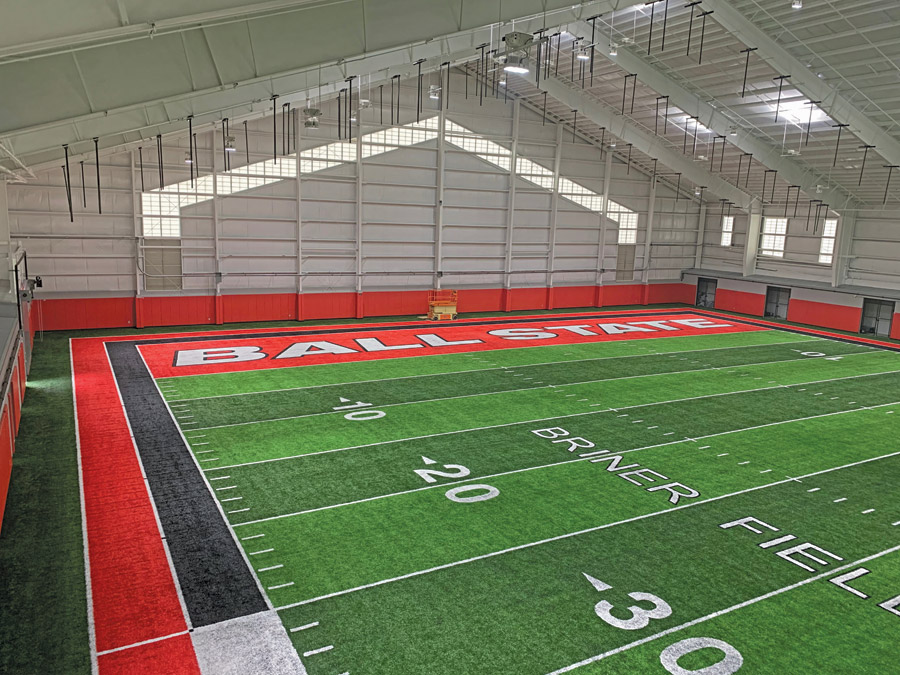 The pandemic caused Messer, along with the rest of the construction industry, to negotiate a whole new set of issues, from concerns for the health of employees, customers and others to ongoing supply-chain delays.

Steve Bestard, senior vice president and COO at Messer, says the company has always prioritized safety and was well prepared to act quickly when the pandemic hit in March 2020.

“We had to adapt to new COVID regulations, but it felt natural when we already had that safety mindset in place,” he says.

The Scheumann Field Indoor Practice Facility at Ball State University in Muncie, Ind., is an example of the zero-injury culture Messer practices.

It was completed in summer 2021 on an active campus where Messer was charged with minimizing disruption, ensuring student safety and maintaining access to campus events and classes.

The project underwent 69 comprehensive safety inspections over the course of 12 months. Messer earned an Outstanding Project Safety Award from the Coalition for Construction Safety for its work on the project.

Another project with zero recordable incidents was the University of Louisville’s Belknap Residence Hall. The job entailed demolition of an existing residence hall and construction of a 130,255-sq-ft resident hall with single and double rooms and a total of 482 beds.

Still another active campus on which Messer is currently working is the Ohio Living Heritage Pointe senior living residence building in downtown Columbus. The work includes demolition of a connector building between two towers and construction of an 11-story concrete frame tower with 57 residential units and two parking levels. Construction began in spring 2021 and is targeted for completion in spring 2023.

Adam Fait, corporate executive of facilities at Ohio Living, says the project is being completed with minimal impact on residents. 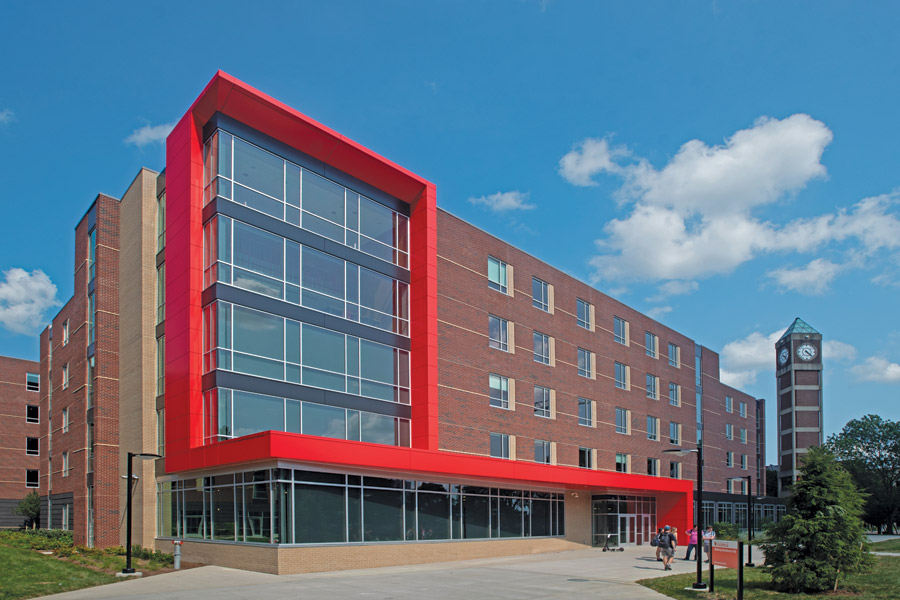 “The residents themselves would comment about Messer,” Fait says. They’d watch [the workers] every day from the existing building and say, ‘Every day feels like the first day on the job—the jobsite is so clean.’ And they also enjoyed watching the workers do their calisthenics every morning.”

In addition to focusing on safety, Messer is committed to increasing diversity. On the children’s hospital project, Messer partnered with Cincinnati Children’s Hospital, Easterseals Serving Greater Cincinnati/Building Value and 16 subcontractors to create sustainable careers for 50 people from nearby neighborhoods.

“Creating opportunities for diverse businesses, hiring a diverse workforce and investing in community partnerships makes our workforce and our neighborhoods stronger,” says Stanford Williams, vice president, chief inclusion and diversity officer. “It’s critical to the economic vitality of the diverse communities and customers we serve.”

Messer also supports the communities where it works in other ways. In 2021, the company donated $2.5 million to nonprofits across its 10 regions and spent more than $215 million with certified minority and women-owned businesses.

While Messer counts many successes, it, along with the rest of the industry, faces challenges such as supply chain issues and rising materials costs.

“Volatility in the supply chain and with materials costs has highlighted how crucial it is that we have strong relationships with our customers, subcontractors, supplier and design partners,” says Bestard. “This environment requires constant, open communication about costs as they stand each day so we can lay out a plan for success.

“Our project teams and cost planning and estimating experts are continuously [working] with customers to guide them to the best possible decisions for their projects,” he adds.

Messer engages early on with customers and works with them through the preconstruction process to avoid relying on a single source in order to achieve added flexibility for materials.

That happened at the headquarters Messer is building for ERMCO Inc., an electrical technology company outside of Indianapolis. The 205,200-sq-ft facility will include 63,240 sq ft of office space and a 141,980-sq-ft shop.

“We advised changing the roof design to use a different insulation that would arrive in time to stay on schedule,” says Carl Dennin, operations vice president for Messer.

Messer also builds strong bonds with customers who come back when other projects arise. “A large percentage of our work is repeat clients,” Bergman says. “I think that goes a long way [to building success].”

ENR Midwest Top Contractors: Midwest Contractors Don't Let the Pandemic Get Them Down

JF Ahern is ENR Midwest Specialty Contractor of the Year