Embracing technology and innovation is hardwired into Wesbuilt Construction Managers—a conviction so ingrained that it has revolutionized how the firm—and many of its clients, design partners and subcontractors—execute a diverse mix of construction projects across the ENR New York region.

“We are literally buying software and trialing software on a weekly basis,” says Donal McIntyre, co-founder and president of New York City-based Wesbuilt, which grew its regional revenue from $52.3 million in 2020 to $88.1 million last year. That’s the timeframe in which the decade-old firm has molded a pioneering integration of 3D scanning and building information modeling software that not only is reaping huge time and cost savings, but also is transforming project culture.

Wesbuilt in June purchased Clear Edge, a comprehensive scan-to-BIM software package that captures sections of existing steam pipe and plumbing in renovation projects that must remain in place, McIntyre says. Using algorithms and coding, the software recognizes pipe dimensions and function, then inputs the data into a point cloud to create a model that quickly integrates with new construction plans. 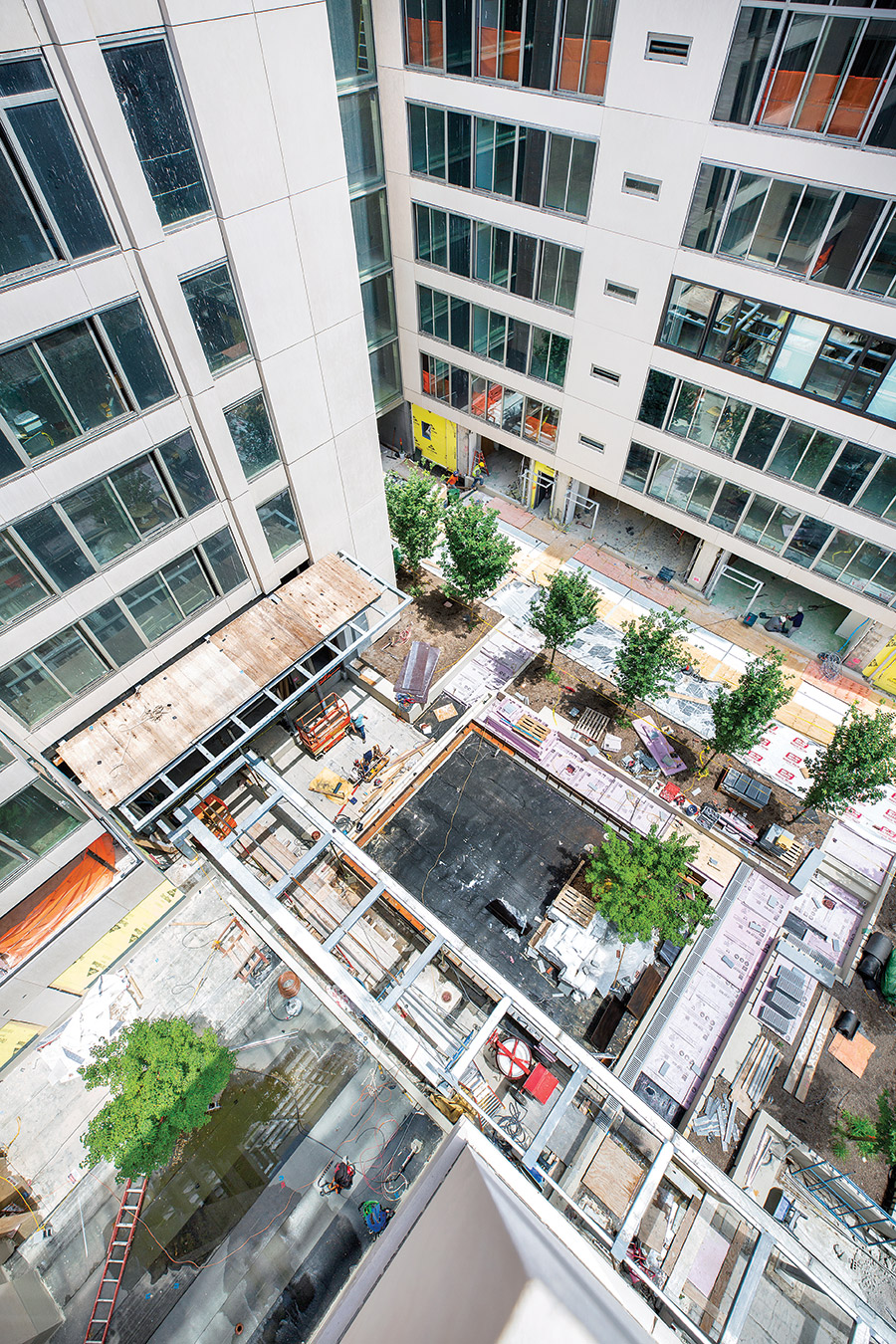 On the dual tower, 200,000-sq-ft 34 Desbrosses St. renovation, Wesbuilt scanned all spaces and incorporated the data into its BIM model, allowing for error-free shop drawings.
Photo by Ola Wilk Photography

A standard scan still requires studying images and modeling by hand to get the exact dimensions to design around, he says.

“If we were trying to model the existing conditions of a 20,000-sq-ft office space, it would take us three or four days to model all the existing” mechanical, electrical and plumbing details, McIntyre says. “Now we can do it in a couple of hours.”

Such technology defines Wesbuilt’s approach, says Mark Galway, co-founder and principal. “It’s become a really essential part of every project we do,” he notes. “We’re in a sense automating how we do things and making it more computerized, more precise.”

Wesbuilt had been developing its process for years, but the pandemic provided an unexpected reason to implement it, Galway says, adding that the firm asked for permission to do 3D scans of spaces before bidding on projects and shared data with project owners and subcontractors.

“When everyone was social distancing, we were going to jobsites doing 3D scans,” Galway says. “Instead of trying to get subcontractors to do walkthroughs, we’d issue the scan with our bid package. We saved them having to go to jobsites when people didn’t want to travel, and it opened doors for us with clients.”

Seemingly subtle, the change is a fundamental shift, says Austin Welsh, owner of L&M Air, an HVAC contractor that works with Wesbuilt. “It’s a gift. They’re taking a cumbersome part of the project off of us and doing it themselves.”

The approach also streamlines coordination with design partners and owners, says Thomas Furman, associate partner at SLCE Architects, which is working with Wesbuilt on a Manhattan residential renovation project. “The scan plus the BIM enabled us to figure things out in real time, and then have discussions with the client group in real time so they can understand the technical issues and make decisions and give direction quickly,” he says.

A clear result of the new process is far greater cost and schedule certainty, which clients grasp, McIntyre says. “The downside of all our technology is that clients probably don’t see all the work that goes into it,” he acknowledges. “But we’re certainly seeing the benefit of repeat work.” The team is far from done, with many additional modules and new process innovation plans in the pipeline. 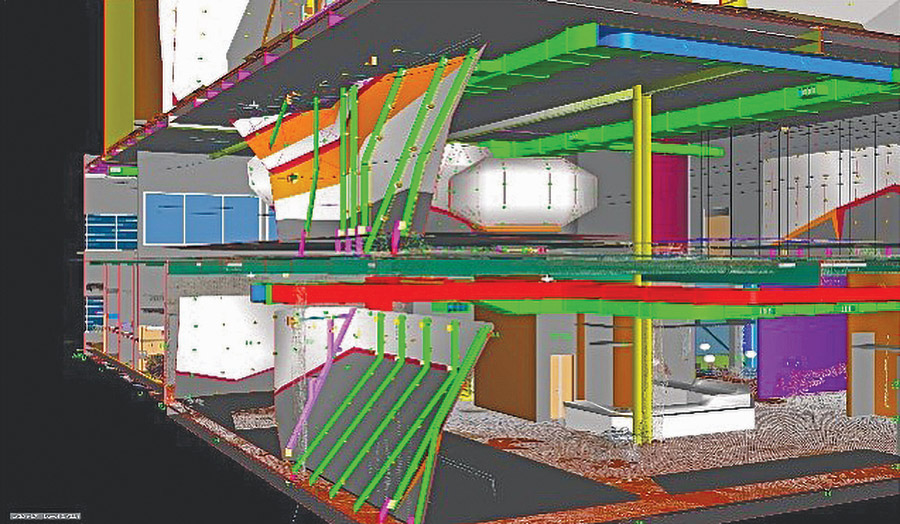 Wesbuilt’s detailed BIM model of The Cliffs (above), a two-story indoor climbing center in Brooklyn, accelerated the completion of a complex, unusual project (below).
Photo and BIM images courtesy of Wesbuilt Construction Managers 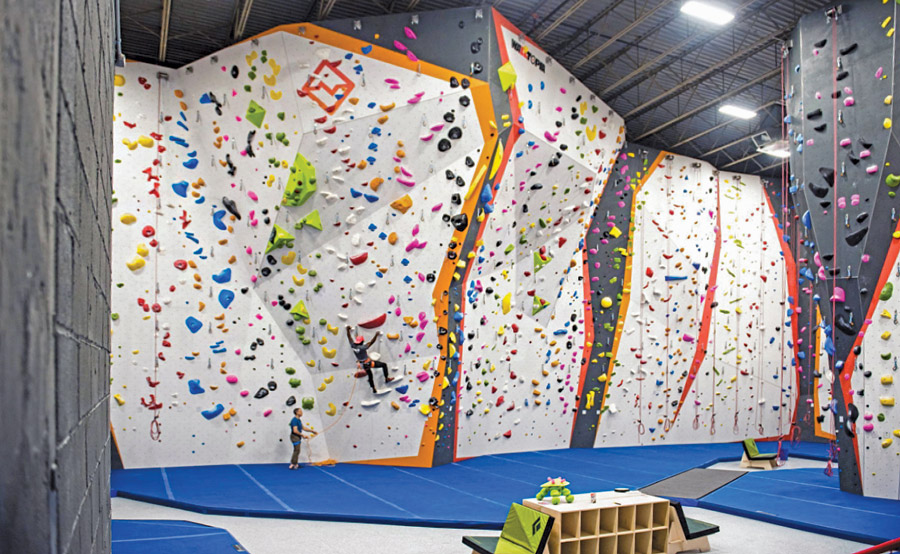 From Wesbuilt’s start in 2012, implementing technology was a mantra not only for leadership but for all of its 73 current employees, McIntyre says.

“It took many years of pilot programs and experimentation to make things work,” he says. “It’s not a stand-alone department of the company. We always make sure that it’s an embedded process, that everybody touches it.”

While the firm attributes its growth to aggressive, focused market expansion, its innovation-focused culture also has boosted recruiting and retention and client interest.

The firm encourages strong community support, recently organizing its fifth annual fundraising event that drew outside construction industry and medical professionals to contribute $150,000 for the Little Baby Face Foundation, a city-based nonprofit that covers expenses for children born with facial deformities to have reconstructive surgery at area hospitals. McIntyre is vice president of the charity, with Wesbuilt’s efforts generating a total of more than $500,000 in financial support.

“When everyone was social distancing, we were going to jobsites doing 3D scans.”
—Mark Galway, Principal, Wesbuilt

McIntyre aims to set an example for construction peers in broadening the use of the firm’s process in areas such as interiors and renovations, and among smaller contractors.

“Our research and development over the years puts us definitely ahead of the curve, but I think it’s going to become the norm,” McIntyre says.

Adds architect Furman: “The way that they implemented the BIM with the scan and tied everything together in the initial front end of the project was hugely beneficial.”

Scanning with 3D technology has been the game changer leading to stark improvements, says McIntyre. The firm also owns the innovation and incorporates it in house, instead of outsourcing it and potentially losing many efficiency and coordination benefits, he says.

The firm has bought high-end equipment, such as Trimble X7 and Matterport Pro 2 laser scanners, and regularly adds new software and tools, McIntyre says. “The only way to do it is to have your own expert team and take control of the process,” he says.

The process, with its first full-scale rollout on a New York City Police Dept. traffic control center several years ago, now is used on all firm jobs, he says. Wesbuilt takes on residential, school, religious facility, medical, retail, restaurant and smaller infrastructure work, McIntyre says. It has worked for or partnered with large regional owners such as Related Group, Univision, Sterling National Bank and New Balance.

The goal now is to remain focused on the New York City tristate region but also to expand more into life sciences and hospital projects.

Wesbuilt’s marriage of scanning and BIM has rippled throughout the firm, says Galway. “From an operational perspective, BIM has really improved our whole system,” he says.

Wesbuilt has corralled BIM, laser scanning and virtual design and construction under the banner of its Collab project—short for collaboration.

The effort starts from day one, Galway says. “If we get awarded a job today, the first thing we do is we start our BIM department on the coordination drawings,” he says.

Most CMs first award MEP contracts and wait for shop drawings, which can be lengthy. Wesbuilt has a fully coordinated set of shop drawings it can submit to architects within two to three weeks, saving that same amount of time on the typical 14-week buildout schedule for an interior fit-out, Galway says.

While Wesbuilt’s 3D point cloud scan generally occurs before bidding a job, with an award the firm does a deeper scan and starts clash detection for mechanical, sprinkler, electrical, and plumbing designs, he says. That also provides subcontractors with an accurate scan of existing conditions for their drawings, Galway adds.

Scanning equipment also feeds into advanced modeling tools such as Autodesk, Procore and Tekla, as well as into field BIM systems and through programs such as AutoCAD, Revit and SketchUp. Those tools communicate to ensure coordination and real time tracking of project specs and updates, with the team having access to the digital 3D model, Galway says.

“We find that it does eliminate a lot of waste, fabricating stuff that doesn’t fit and having to modify it or throw it in the garbage,” subcontractor Welsh says.

A current project showcasing the process is 34 Desbrosses Street, where Wesbuilt is managing redevelopment of a 291-apartment rental building into a luxury condo with 176 units.

The project has required extensive coordination to preserve existing piping and other mechanical and structural elements, says Brendan Flavin, BIM/VDC manager at Wesbuilt. The team used its Trimble scanner and the new Clear Edge pipe modeling software, which allowed it to create highly accurate shop drawings, he says.

The project has “an insane amount of ductwork and piping,” Galway adds. But with the technology, there have been no delays coordinating new and old infrastructure, he says.

Information from the scans was “live, accurate and trustworthy,” says Furman, whose firm is architect on the condo project.

That Wesbuilt owns the process is also a valuable feature, Welsh says. Often when a contractor outsources BIM modeling, project players are at the mercy of that vendor that often ships the work outside the region, he says.

Getting subcontractors, clients and design partners on board was indeed part of the process, requiring about six months to prepare them for use of the new methods, Galway says. “But now we’ve found all our subcontractors love it because it makes their lives a lot easier,” he says.

A major benefit is eliminating inevitable conflicts at the bidding or drawing stages where different trades look at a space and their specs take the same “free path,” Welsh says. Having a scan and model at the outset eliminate the headaches of such coordination, he says.

Wesbuilt next plans to implement the scanning and modeling platform for drywall contractors, aiming to create drawings for them that already have framing and openings for ductwork and pipes so carpenters don’t have to return to repair completed walls after HVAC or plumbing trades install their work, McIntyre says.

The team has also implemented the process with structural steel using Tekla models, an effort that has helped it transform a former parking garage in midtown Manhattan into a new food service business, he says. The project team was able to include dimensions for other infrastructure in original steel designs, he says.

Further ahead is a plan to create a digital closeout binder with a final handover scan that will give project owners a full complement of documentation and submittals in a 3D format, Galway says.

“I like to work for people like that,” Welsh says, “who are trying to always improve themselves and make sure they’re on top of what’s out there.”