While work is abundant across the three-state region of Arizona, Nevada and New Mexico, firms participating in ENR Southwest’s annual Top Contractors survey are navigating an unprecedented mixture of challenges, from soaring materials prices and shortages to a continuing deficit of skilled workers.

“It’s an incredibly hot market for most sectors, and we expect that to continue for the foreseeable future,” says Tom Dunn, president of the Arizona Builders Alliance. “However, supply chain issues, inflationary pressures, increasing financing costs due to interest rates and soaring fuel costs may create a slowdown sooner rather than later.”

In Arizona, Dunn expects expanding opportunities in transportation, particularly with roads, and energy. The ongoing commercial construction boom in the Phoenix metro area can be attributed to pro-business politics, led by Gov. Doug Ducey (R), who supported infrastructure investments that allowed businesses in states such as California to relocate to the Southwest, Dunn says.

While there are many projects out there—several large regional jobs are funded using COVID-relief funds—contractors must complete them working in a stressed economy. Nevada, for instance, saw an increase in MAP21 funding from the federal Highway Trust Fund of 18% in the IIJA, says Craig Madole, CEO, Nevada Chapter AGC in Reno. “But inflation of existing contracts pretty much spent the increase,” he adds. 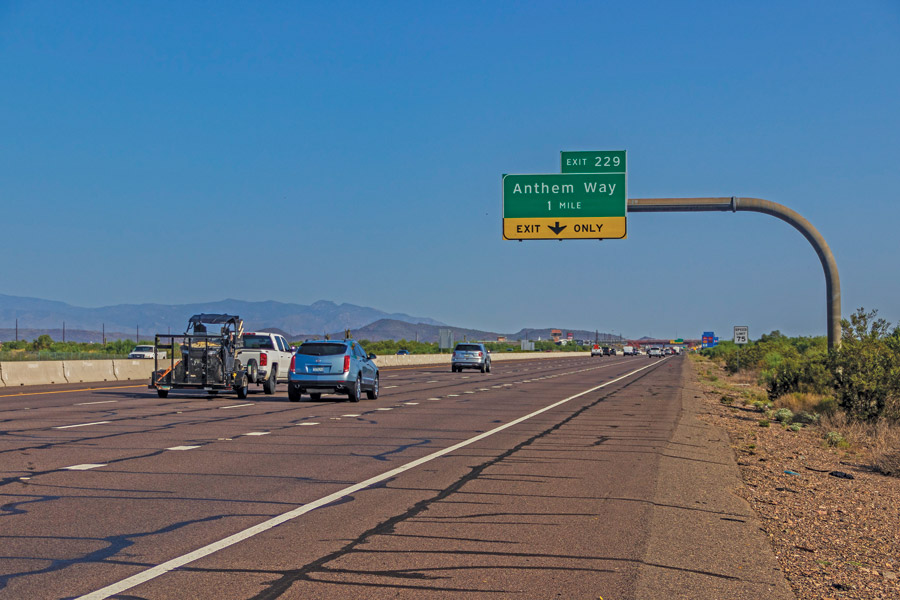 The Flex Lanes project north of Phoenix will relieve traffic congestion in the northbound lanes from Friday to Saturday night and southbound lanes from Sunday morning through Monday on I-17 from Anthem Way to Sunset Point using two flex lanes for eight miles.
Photo courtesy of the Arizona Dept. of Transportation

Rising materials costs and gas prices are affecting all phases of construction. “Many projects have not had escalation clauses and have required contractors to negotiate increased pricing with the owners,” he says.

Commercial construction, especially tilt-up buildings and warehouses, will probably remain strong sectors as well as renewable-energy projects, and school construction should continue to be a significant market for the next five years, Madole says. Worker “shortages have been challenging but not as restricting as the inflation of materials,” he adds.

However, extremely large projects, many of them underway or planned in Arizona, are exhausting resources, Dunn says.

“Semiconductor projects are driving labor, management and material cost increases that are not sustainable,” he says. “There’s more competition for all of the above from new contractors entering the market. Those pressures will affect the bottom line of other projects and may in fact slow or stop the Arizona construction boom.”

Kiewit is closely watching supply availability and escalation. “Clients expect cost certainty and, for the most part, contractors are not seeing that on the supply side. We may be asked to hold our price for more than a year, but our quote with a supplier may only be good for a few days,” says Stan Driver, senior vice president for Kiewit Infrastructure West, based in Phoenix. “Understanding escalation costs and other procurement impacts is more important now than ever before.”

In New Mexico, uncertainty also has been a theme for contractors, says Carla Kugler, president and CEO of the ABC chapter in Albuquerque. Estimating projects, for example, has become difficult because of the supply chain delays that began in 2021. Inflation and steep price increases for materials have intensified uncertainty.

“Contractors can tell you what a project costs on the day a bid is asked for—the problem is anticipating the increase of costs when the project is underway.”
—Carla Kugler, President & CEO, ABC Albuquerque

“Contractors can tell you what a project costs on the day a bid is asked for—the problem is anticipating the increase of costs when the project is underway,” Kugler says. “Add this to an already strained skilled labor market. It has been challenging.”

Although federal infrastructure money will increase the ability of state and municipal governments to perform and request projects, inflation and supply issues are making agencies hesitant to move forward on projects with many unknowns, says Kugler.

“Skilled labor can delay projects just as much as supply chain or inflation. While advances in technology may curb the necessity of some, it will never completely fulfill the industry’s need for people,” Kugler adds. “Attracting people into the industry remains the highest challenge for us.”

The Jaynes Cos., Albuquerque, is also focused on the recruitment and retention of employees who fit in with its culture. “We have been fortunate through an intentional push to find people who want to work for an employee-owned builder,” says Shad S. James, the firm’s president and CEO.

“The majority of contractors in the Southwest fall into what the feds consider ‘small’ contractors,” she says. “So contractors in our region will be less likely to receive these contracts.” 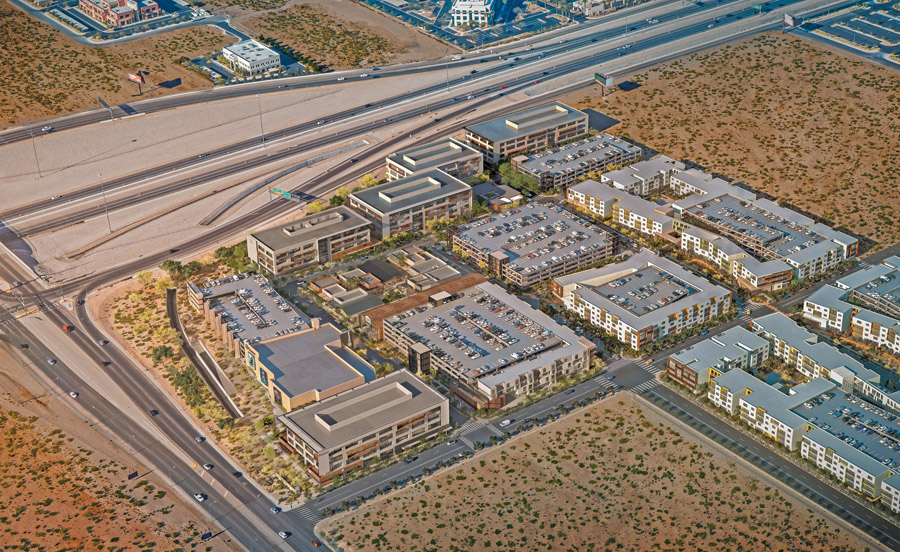 The UnCommons in Las Vegas is a first-of-its-kind mixed-use development, designed for a modern workplace that enhances people’s lives through amenities, open space and connectivity.
Photo courtesy of Burke Construction Group

Plenty of Work and Issues

While Kiewit Corp. saw a marked decline in regional revenue from 2020 to 2021, from $1.5 billion to $784 million, the firm remained atop ENR Southwest’s annual Top Contractors ranking.

“Our work in the Arizona, New Mexico and Nevada markets remains strong. The decline in cumulative revenue from 2020 to 2021 was characterized by the completion of work in 2020 and the start-up of new work in 2021,” Driver says. Kiewit also has more than $24 billion in backlog, with nearly 10% of that in the Southwest region, he adds.

Roadway construction is a company specialty. In Las Vegas, Kiewit will build the $305-million I-15 Tropicana Interchange Project for the Nevada Dept. of Transportation, a main gateway to the resort corridor and an essential connection to some of the city’s largest employment centers. Substantial completion is expected in November 2024.

Kiewit is also completing the Arizona Dept. of Transportation’s $446-million I-17 Flex Lanes project, which connects Phoenix and Flagstaff to northern Arizona communities such as Prescott, Sedona and Flagstaff, in a joint venture with Fann Contracting Inc. The 23-mile project is expected to be finished in 2025, ADOT says.

Burke Construction Group, Las Vegas, grew its annual regional revenue by 7% to $156.8 million in 2021. “Given the amount of new construction taking place across the nation and within southern Nevada, we have had the opportunity to collaborate with a variety of clients to further enhance local communities. With the new developments that are taking place and companies relocating to the Southwest, it has had a tremendous impact on our annual revenue increase,” says Kevin Burke, the company’s president and CEO. 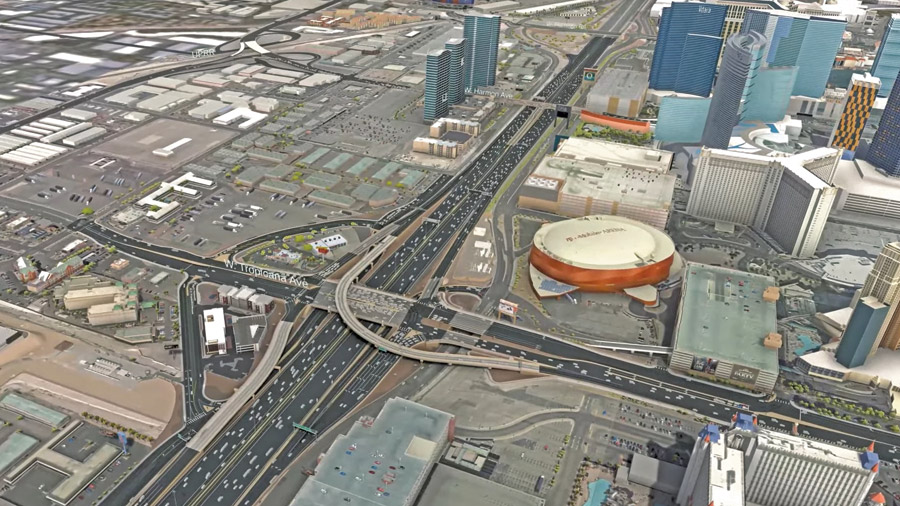 The I-15 Tropicana Interchange project near Allegiant Stadium in Las Vegas includes replacing the existing interchange and structures to widen and lengthen the bridge spanning I-15 for increased capacity and vertical clearance.
Rendering courtesy of the Nevada Dept. of Transportation

Multifamily and industrial construction is at a high level. “Today’s multifamily and industrial facilities aim to provide our region with live-play-work communities and innovation hubs. To provide more inclusive communities, multifamily projects integrate highly sought after amenities such as bars and restaurants, fitness facilities and other specialized areas,” he adds. “The new approach to warehouse construction seeks to accommodate the diverse space requirements of owners, including offices, logistics and data and information.”

Burke Construction is leading work on the $400-million UnCommons mixed-use development, which spans 40 acres. The Las Vegas community located near I-215 will be a Green Globes certified campus and the first WELL certified project in the state. “UnCommons encompasses the concept of human connection and strives to build an innovative community that inspires a new concept [that includes] community and belonging, health and well-being and sustainable working and living,” Burke says.

The Jaynes Cos. posted tristate revenue of $236.8 million for 2021. Key markets included health care, multifamily, municipal projects and secondary and higher education, says James, who also sees more demand for warehouse and manufacturing, but “the commercial leasing market is still trying to align with what the demand is.”

COVID impacts have continued to affect project starts and materials and equipment availability. “However, we think this has also introduced an opportunity for owners who are decisive and aggressive in the current market,” James says. “We have seen project starts delayed, but fortunately, we have not seen projects being canceled.”