As COVID-19 surged in 2020, the University of Arkansas for Medical Sciences fast-tracked its 154,800-sq-ft Orthopaedic and Spine Hospital—a $68.4-million, five-story structure on schedule for completion in March 2023 by Conway, Ark.-based Nabholz Construction. 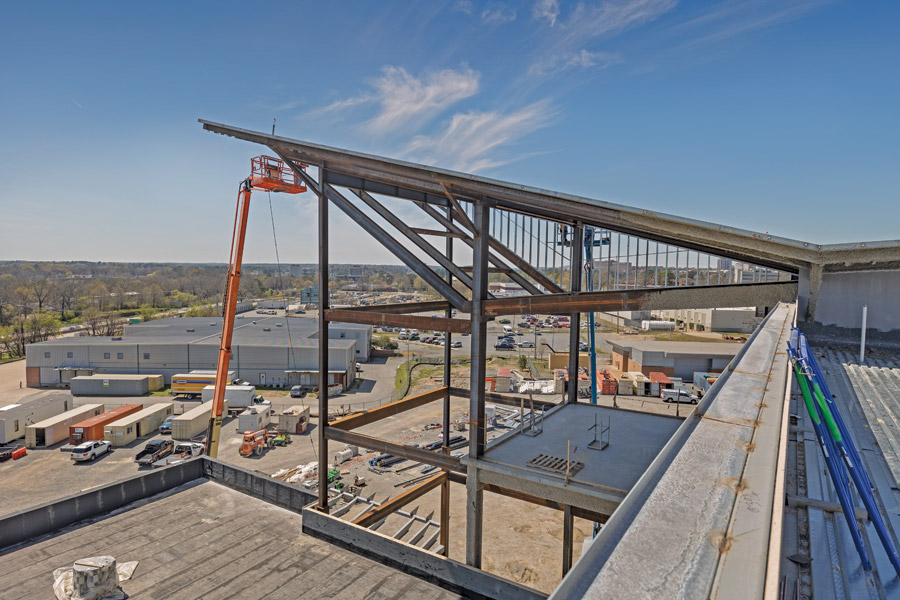 “UAMS has always required use of an orange mix of nominal brick, but senior leadership decided to break with tradition,” says Aaron Scott, principal and architect of record for Cromwell Architects Engineers, based in Little Rock. “The prominent location of the project along Interstate 630 made this a perfect moment to introduce material and palette changes for the entire campus.”

The university team also approved the fast-track design so that major items such as structural steel and mechanical equipment were purchased early to lock in pricing in a market in which material and mechanical equipment were increasing in cost by 10% to 20% every month, says Chris Whitehead, Cromwell’s senior project manager. And thanks to fast-tracking, the orthopedic and musculoskeletal residency programs could be moved into the hospital quickly.

That saved approximately six months off the schedule, moving the start date to March 2021 from September of that year, explains Andrew Norman, senior project manager at Nabholz.

“We worked very closely with UAMS and the Cromwell team to make sure that the design elements, selected materials and equipment met the budget requirements and would allow for fabrication and/or delivery to meet our aggressive completion schedule,” says Doug Bonds, project executive for Nabholz. “The remaining design was completed and issued in packages that were coordinated with the progressing construction schedule to allow adequate time for bidding and procurement of materials.”

While fast-track scheduling has helped in avoiding material delays, the multiple bid packages required some pivoting from the typical construction process, he says. For instance, the construction team knew that door frames would be a minimum eight to 10 weeks out from approved shop drawings. As a result, a directive was included in the framing and drywall bid package that the first-floor and second-floor door frames be installed after the walls were framed.
The new hospital is just past midway and progressing as scheduled. To date, the project has logged 190,000 worker hours with zero accidents, Nabholz says. Patient cubicles line the exterior curtain wall and wrap around the perimeter of the space. The center of this area will include nurse stations, medicine rooms and other support spaces.
Photo courtesy of Cromwell Architects Engineers

The slab-on-grade foundation comprises 3,980 cu yd of concrete on 100 drilled pier concrete shafts and approximately 4,070 ft of 24-in., 30-in. and 36-in. tie beams to an average depth of 28 ft to 34 ft, with the deepest punched to 56 ft, says Joseph Eggburn, assistant project manager for Nabholz.

The structural steel frame incorporates a proprietary design by SidePlate that eliminates most of the moment welds and replaces them with bolted connections. Approximately 1,540 tons of steel were used. The standard beam sizes are primarily W27x94 and W24x55, and the largest columns include W18x211 and HSS14x14x1/2.

“The prominent location of the project along Interstate 630 made this a perfect moment to introduce material and palette changes for the entire campus.”
—Aaron Scott, Principal, Cromwell Architects Engineers

“This results in a longer steel fabrication process but a much faster erection time since there weren’t as many lengthy moment welds in the field,” Norman says.

While this is a newer system for the area, it’s “definitely not the first considering the high seismic zone category a large portion of Arkansas is in,” Eggburn adds. “It was utilized on a hospital project that Nabholz managed in Jonesboro, Ark., a few years ago that our superintendents worked on, so they were familiar with the system.”

Meanwhile, Nabholz’s virtual design and construction team is using a robotic total station on site in conjunction with computer models. “All layout responsibilities were given to each subcontractor, and this has also been a great tool for layout verification as part of our quality-management system. This also allows for points to be established in the model for multitrade coordination and as-built conditions,” he says.

“We were able to review above-ceiling rough-ins and address various constructibility issues prior to the subcontractors mobilizing to start their work,” adds Cromwell senior project manager Erin Oakley. “VDC also streamlined the RFI process, so issues were identified quickly, good questions were created, which translated into clear answers from Cromwell AE being sent back to Nabholz.” 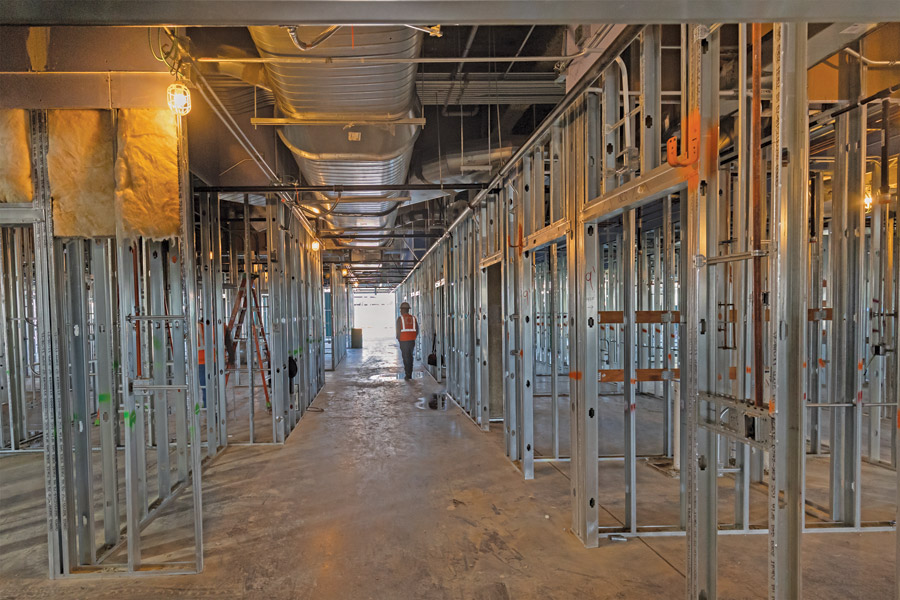 Working in a back-of-house area, workers rough in the overhead MEP systems and fire protection. Orange-painted J-hooks on the right side of the hallway will keep extension cords off the ground to avoid being damaged by equipment.
Image courtesy of Cromwell Architects Engineers

Eggburn notes that Nabholz holds weekly meetings with subcontractors to review different areas of the building and identify if RFIs are required to ensure that the routing of all rough-in was in the best location.

The team also used several tools to locate and protect both public and private underground utilities. First, a subcontractor, Randy Carter Construction, Benton, Ark., uncovered the known and unknown using tools such as ground-penetrating radar. “Both GPR and radio detection were used because, while some unknown utilities had a tracer wire, others did not—thus the requirement to use GPR,” Eggburn says.

Then, hydro excavation trucks “potholed” the lines to verify location and depth. “This avoided any possible damage to fiber optics, gas lines and a 36-in. water main that supplies water for the entire city of Little Rock that was installed in the 1940s,” says Bonds.

Once the team members identified the utilities, they either excavated the area with conventional equipment or backfilled the potholed utility with sand, then placed a piece of 2-in. electrical conduit on top of the line. This conduit extended out of the ground 2 ft to 3 ft and was marked with a colored flag corresponding to the type of utility line and its depth from grade. “All contractors knew what was in the area and at what depth so safe excavation operations could proceed,” he says.

Another concern was the storm detention system. When the Nabholz crew began excavating to reach it, they found an unknown storm drainage line not shown on any as-builts or the city’s underground utility map. “We walked the direction of the storm line and could not find any box that it tied into. We cut a site hole in the top of the pipe to verify that it was active, and it was,” Norman says.

Then, a contractor with a robotic camera ran it up the line until the team saw daylight. “This told us how far away the camera was from the truck, so we then used that information to find the manhole that the pipe connected to. It was fed from a parking lot across the street. We then modified the system to accommodate this added water that was unaccounted for in the design,” he says. 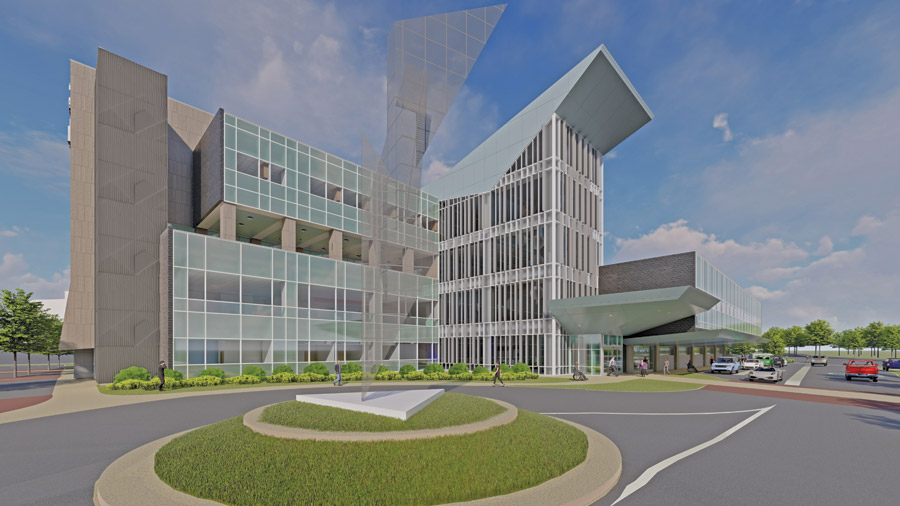 The design of the UAMS Orthopaedic and Spine Hospital in Little Rock integrates a diversity of geometric forms and different types of materials.
Image courtesy of Cromwell Architects Engineers

Finally, the sanitary sewer line had to be connected to a manhole across a busy campus street on the main access route for the emergency department. In place were two 6-in.-dia lines running into the junction box. A new 12-in. line would connect into the box and cross under the road to the project site.

When the Nabholz crew was investigating, they found an existing 6-in. line not shown on the plans. “We asked the engineer of record to review the design and see if an 8-in. sewer line could be used in lieu of the originally planned 12-in. line and still meet the design requirements,” Eggburn recalls.

“We didn’t want to disrupt the traffic on such a busy road, so once the engineer determined that the 8-in. line would meet the design requirements for the new sewer line, then we had our sanitary sewer subcontractor consult a pipe bursting subcontractor who could install the new sewer line versus opening up a trench crossing the road,” he says, noting that a pipe burster can only be used to pull a new pipe through another pipe that is one size smaller.

The team placed the machine on the downstream side of the utility line, running the pipe burster to the other side and pulling the larger diameter pipe through the smaller diameter pipe, thus bursting the smaller pipe, Eggburn explains. “It does not require any excavation over the top or recompaction to take place, and the existing pipe is abandoned in place since it has been broken up.”

The owner praises methods such as this and the scheduling selection.

“Fast-track projects are inherently challenging, certainly with contemporary logistics pressures and while simultaneously orchestrating several other large campus initiatives,” says Michael Connery, UAMS assistant vice chancellor for campus operations and construction, planning and design. “The planning and construction teams have successfully integrated the new building into an existing campus infrastructure while not affecting our day-to-day operations.”

Hospital Expansion Proves To Be a Difficult Dance