Guide that helped reduce the carbon footprint of the 1.2-million-sq-ft office tower is available for all to use

Members of the team for the 850-ft-tall Salesforce Tower in Chicago say they achieved a 19% reduction in the embodied carbon in the building, compared to a typical high-rise, by minimizing office sizes, maximizing structural efficiency and specifying lower-carbon-footprint materials, such as high-strength steel, reinforcing steel and concrete. In doing so, they wrote the book on office tower EC reduction—for all to use.

The 1.2-million-sq-ft Salesforce is the first project of structural engineer Magnusson Klemencic Associates and developer Hines to demonstrate the effectiveness of their 55-page Embodied Carbon Reduction Guidebook. The Hines-MKA guide is an outcome of MKA’s work on the free-to-use Embodied Carbon in Construction Calculator (EC3), which relies on environmental product declarations from materials suppliers.

“It’s been felt in our future projects within the area and even with concrete [suppliers], really looking at their offerings and going through all their cement mixes to see how they can reduce their embodied carbon, even bringing portland limestone cement to the table,” Izzo says.

Specialty mixes reduced the EC in the concrete by 27%, says MKA. The designer specified high-strength reinforcing steel, from 10 ksi to 12 ksi, to reduce rebar content, says Matt Streid, an MKA principal in the Chicago office of the Seattle-based firm.

Regarding structural steel, MKA says it reduced the EC in the perimeter columns by using 65-ksi steel as opposed to the more traditional 50 ksi. The steel is made with 90% recycled content, which has become standard.

Streid says 65-ksi steel is the firm's new baseline. On Salesforce, the strategy reduced the column sizes by 30% compared to 50-ksi steel and saved one to three hours of preheat time to help achieve a 9% reduction in steel on the project.

Both Nucor, which supplied Salesforce, and ArcelorMittal produce a 65-ksi product, which helped with competitive bidding. Streid said earlier projects forced MKA to recommend 50-ksi steel because of a lack of competitive bids.

Walsh expects to complete the $800-million tower next year. The general contractor supports the use of higher-strength steel because it results in a smaller section size and lower EC, says Elliot Wilm, Walsh's project manager.

One way to minimize the carbon footprint is to reduce the office size. At 4-ft 9-in. square, Salesforce offices are half the size of a traditional office.

“There has been a paradigm shift in the past 10 to 15 years where people need less space and companies are looking to fit more people and get rid of some of the wasted square footage,” says Sean May, senior project architect for architect-of-record HKS. 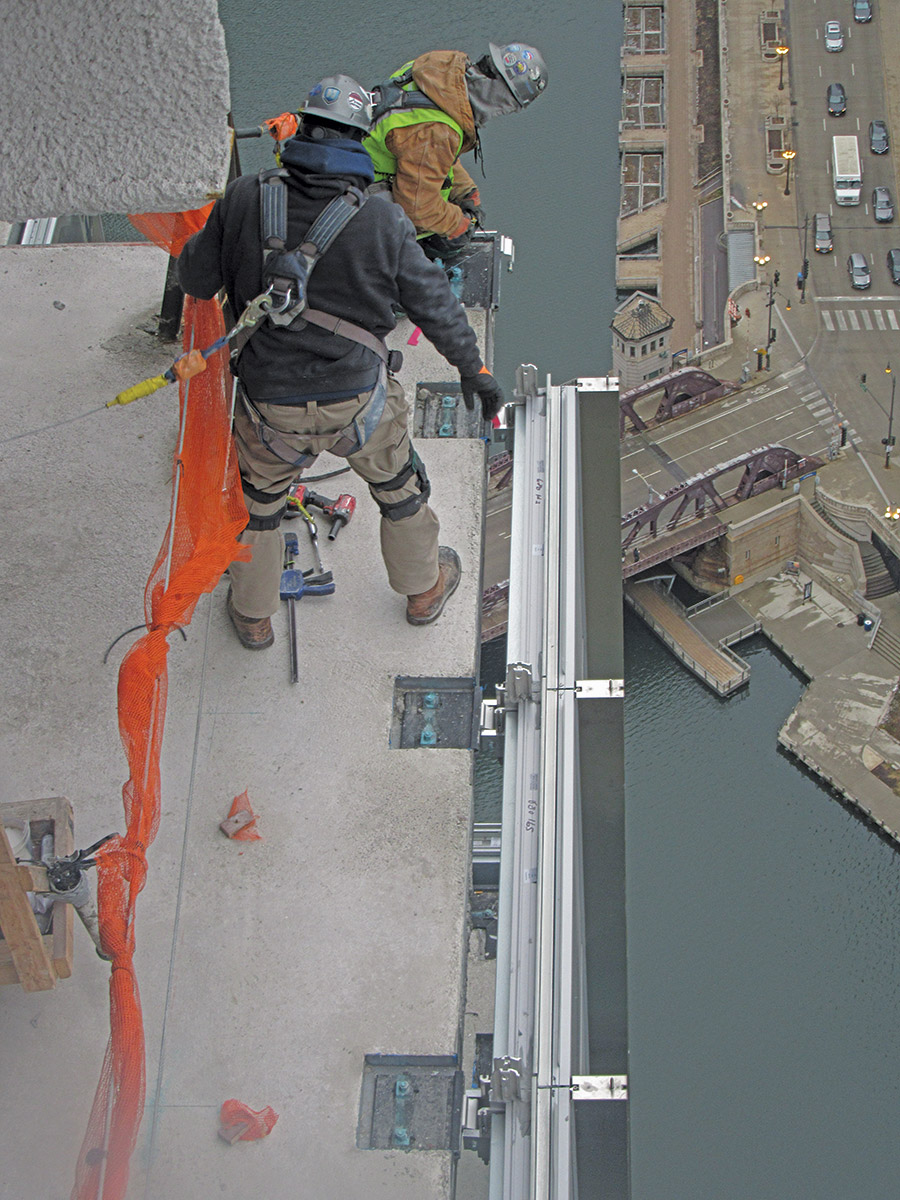 A River Runs By It

The superstructure consists of steel frame around a reinforced-concrete core, connected by composite concrete and metal decking. The foundations consist of 110-ft-long caissons socketed 6 ft into rock and belled caissons under perimeter columns and the core.

Wolf Point South, the speculative building's original name before Salesforce became the main tenant, referred to the confluence of the three branches of the Chicago River. The overall development, which has two existing residential towers, Wolf Point East and Wolf Point West, sits on a former Kennedy family-owned parking lot.

The tower has four reinforced concrete basement levels but only one is below grade—roughly 10 ft below river bottom. The first floor is at the same raised elevation of much of downtown, above lower Wacker Drive. A city-required riverwalk cantilevers 16 ft over the water. Streid says that MKA, design architect Pelli Clarke & Partners, Hines and contractor Walsh Group negotiated with the U.S. Army Corps of Engineers to overhang the river as much as possible to minimize eating into the site, which was already limited by a road underneath Wolf Point East. 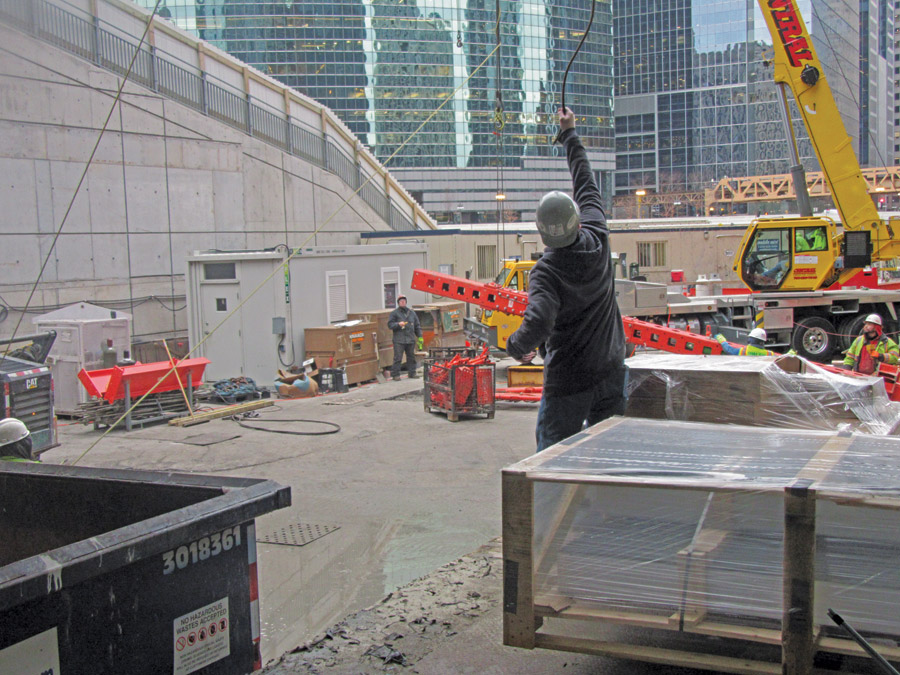 With limited lay-down area, crews had to coordinate crane picks for materials upon arrival.
Photo by Jeff Yoders/ENR

The building is stiffened at levels 38-40 by a system of outriggers that span from the reinforced concrete core to the perimeter columns and a belt truss. “Instead of having a 42-ft-wide core, we effectively have a 120-ft-wide core within these floors,” says Streid. 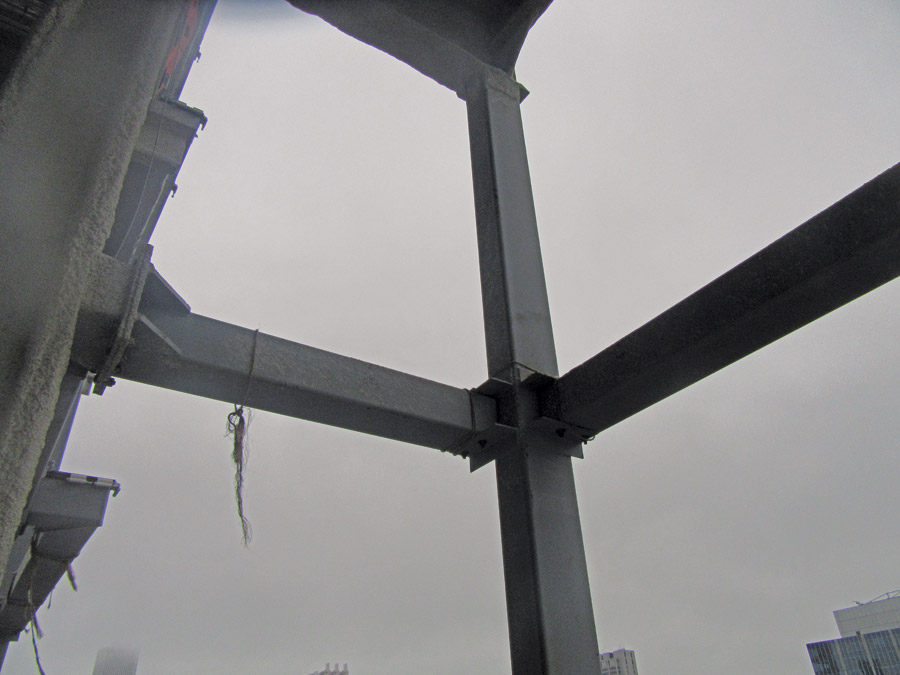 Steel erector Danny’s Construction had to place the outrigger in tight spaces due to the geometry of the building and the two neighboring towers.
Photo by Jeff Yoders/ENR

The belt truss, outriggers and associated tie plates alone totaled 675 tons, says Colin Gilbert, project manager for steel fabricator Cives. Placing those tie plates was difficult inside the core form framing because of the tighter geometry of the slimmed-down tower, especially at level 40.

“The tie plates were 24 in. deep, and the distance between the core form framing and the core wall form itself was 30 in.,” says Carl Hultman, senior project manager at steel erector Danny’s Construction. 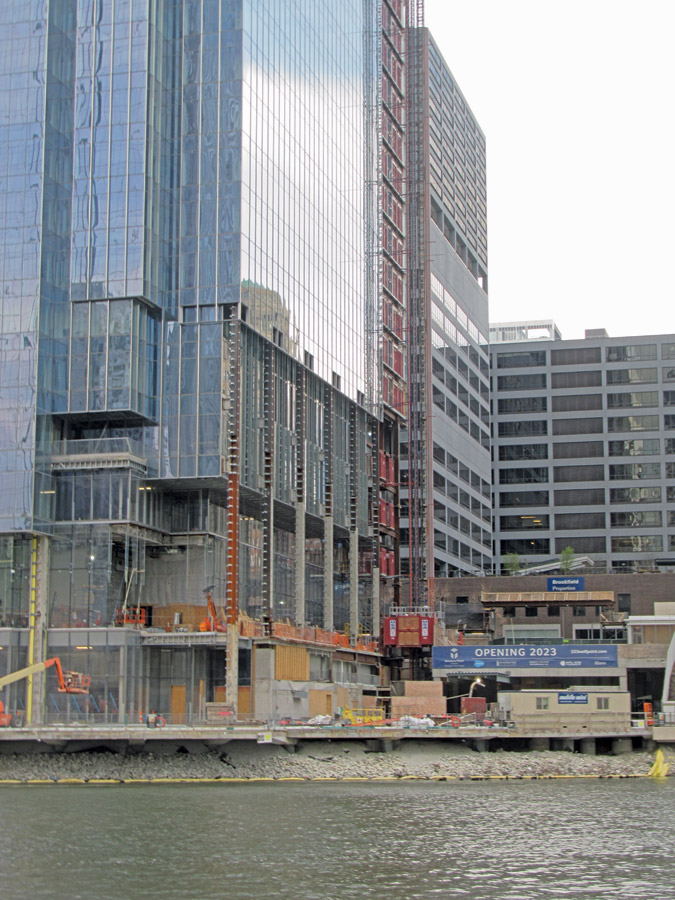 Almost all deliveries to Salesforce Tower’s site had to go through a tunnel underneath Wolf Point East directly north of the site.
Photo by Jeff Yoders/ ENR

Accounting for the depth of the lift, there was only 4 in. of vertical clearance remaining to place the tie plates. Hultman says Danny’s chose rigging points close together so that they could fit the end of a plate in and then let the center of it move further past its final location to allow enough room to swing the opposite end of the tie plate where it needed to be.

The tie plates could then be lowered and final position adjustments made, then welded in place to their supports within the concrete form.  Extensive surveying and tight erection tolerances allowed the final bolted connections of the outriggers to fit up seamlessly.

Cives created a 3D model for all of the structural steel to plan delivery and erection, while general contractor Walsh coordinated the entire project in a Navisworks model that incorporated MKA and HKS design models. 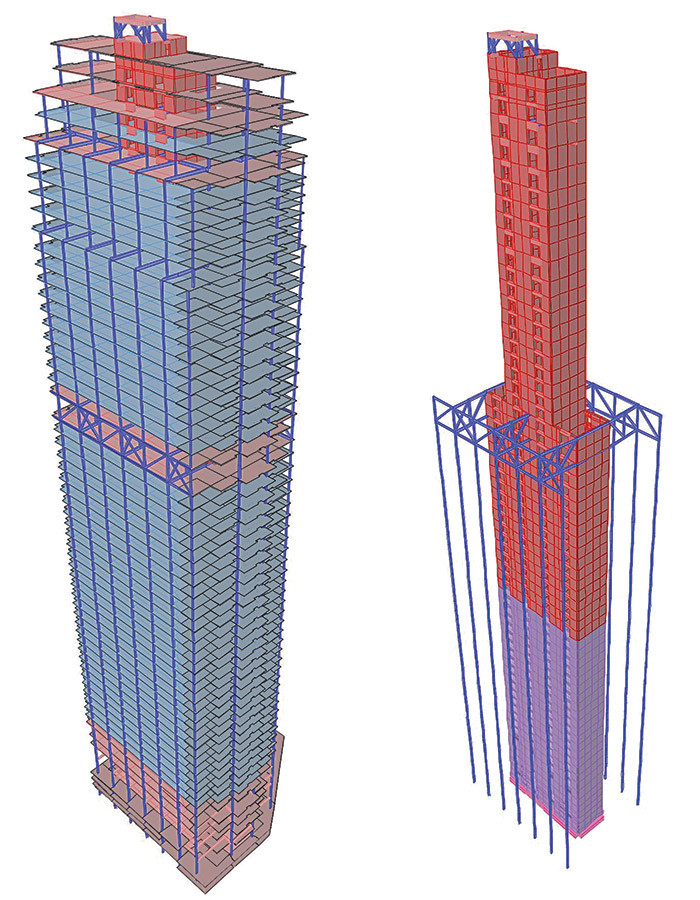 A belt truss at floors 38-40 and outriggers that begin at the 40th floor allow Salesforce Tower Chicago to remain stable against wind and shear forces right along the Chicago River.
Graphic courtesy of Magnusson Klemencic Associates

The Future of Embodied Carbon

Izzo notes that all of Hines’ new developments will use the guide to reduce EC. The developer's Conceptual Construction Group, the team within Hines that developed the guide with MKA, is helping to push implementation on day-to-day activities with its design and construction teams. Some other project teams already using the guide include Oak Brook in Oak Brook, Ill., and 555 Greenwich in New York City. 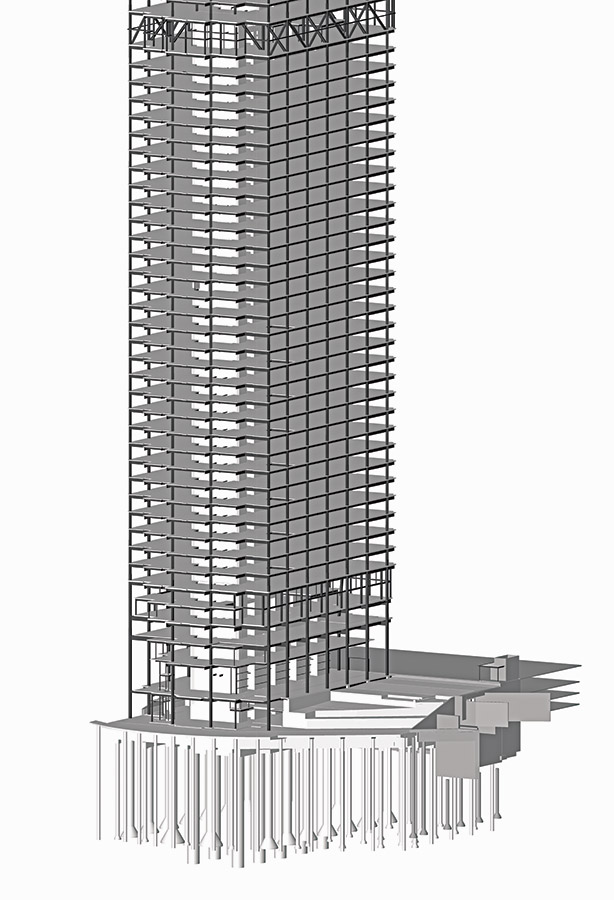 Salesforce Tower has belled caissons under perimeter columns and the podium, and 10 core caissons that go 110 ft deep into bedrock with 6-ft sockets to deal with heavy wind loads and uplift.
Graphic courtesy of Magnusson Klemencic Associates

“Operational carbon is very easy to see" because of energy reduction, Izzo says. “Embodied carbon is a fairly new topic," and relies on product and material data transparency, which isn't fully available yet from suppliers, he adds.

"We know it’s a big problem," Izzo says. "I think it’s about stewardship and realizing that technology will get us there.”