Design Firm of the Year

2021 was the third time in the last five years that the company has led the 11-state Midwest region in revenue. The firm finished either first or second among reporting firms every year since 2017. The energy market leader continually points to employee-ownership as its secret ingredient.

In 1985, a group of employees banded together to purchase the company from Armco Steel. After 37 years the firm is still employee-owned.

“There were challenges [during the pandemic], no question about it,” says Ray Kowalik, chairman and CEO. “Our site teams made sacrifices. In 2020, we had almost all our oil and gas projects postponed. But we have that employee/owner mindset, and people adapted. The fact our employees are owners certainly contributed to our success.”

Burns & McDonnell’s 2021 would be impressive by any standards; that it happened in a pandemic year—when many architecture and engineering firms on ENR Midwest’s Top Design Firms list were downsized—makes the engineering giant’s growth among such uncertainty more of an accomplishment. Last year, the company posted record Midwest revenue of $664.18 million, including $285.25 million in power work, $47.17 million in petroleum and $25.7 million in industrial process. The engineering and architecture firm produced a record $5.7 billion in worldwide sales from 17,000 projects supported by the growth of nearly 650 employees. Burns & McDonnell has 60 global offices and 10,000 employees.

“There are lots of universities, lots of hard-working kids, and we have the opportunity to get that incredible talent. Kansas City is the third-fastest growing tech market in the U.S.”
—Ray Kowalik, Chairman and CEO, Burns & McDonnell

Williams and Kowalik both talk about the company as being an easy button for clients and customers because of their reach into so many different sectors. While that reach extends globally, they also spoke of the importance of having a Midwest-based firm.

“By far the biggest advantage [of being in the Midwest] is access to hard-working talent,” says Kowalik. “There are lots of universities, lots of hard-working kids, and we have the opportunity to get that incredible talent. Kansas City is the third-fastest growing tech market in the U.S.”

The industry leader in generation capacity has come a long way from the company that got its start in 1898 when Stanford engineering graduates Clinton S. Burns and Robert E. McDonnell moved to Kansas City in search of a base with the most clients in a 200-mile radius.  The next 124 years would see two World Wars, two pandemics and a Great Depression.

Agnes Otto, Burns & McDonnell transportation director, points to some of the company’s close-to-home projects as a source of pride, particularly their work with the Kansas Dept. of Transportation and the Kansas Turnpike Authority. 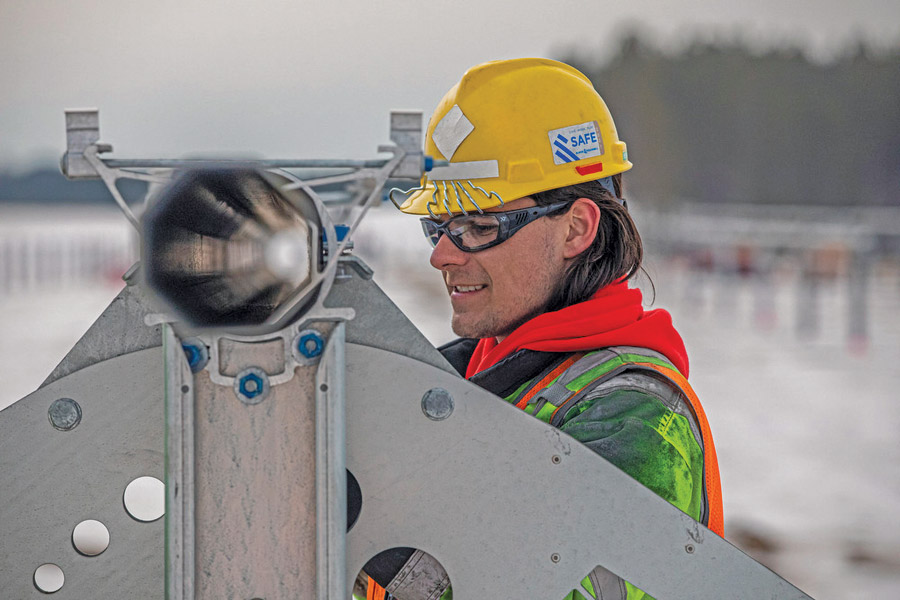 EPC projects are a growing business for the power market leader.
Photo courtesy of Burns & McDonnell

“Employee-ownership is so tangible here. People work incredibly hard but do so in their interest and the client’s interest. It’s the sixth player on the floor,” says Otto. “Holistically, because we house so much under one roof, we have a lot to bring to clients.”

Otto says the company’s involvement with Kansas infrastructure allows Burns & McDonnell to provide the state with a number of strategies to maximize the dollars coming from the federal level. “It’s been fun for our team to be partially embedded with KDOT to roll that out,” he says.

The KTA Bridge-Raising Program was a project Burns & McDonnell worked on in Sumner and Sedgewick counties in southern Kansas. The job required the raising of 21 bridges on I-35 and I-335. The bridges needed to be raised between 12 and 21 inches in order to encourage more freight traffic and improve safety in the local communities. The entire project cost was cut by $1.3 million and the schedule was cut in half by the firm utilizing the engineer-procure-construct design-build model.

Cutting and saving is something that comes up often when speaking with Burns & McDonnell employees— whether it’s cutting budgets or saving the environment. 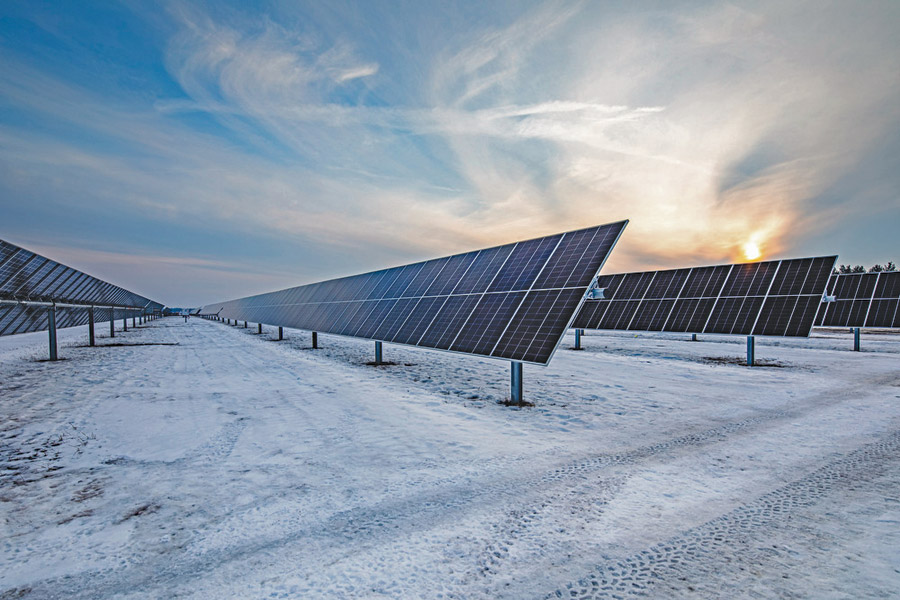 “We’re looking at how do we integrate more sustainable solutions,” says Mandy Olson, engineering director for transmission and distribution. Olson says the company is proud of its work to accelerate decarbonization through electrification of vehicles and installing substations with the lowest carbon footprint possible.

“We can have a huge impact with our utility clients helping them to decarbonize,” she says.

One example of this work with utility clients is Burns & McDonnell’s project with Ameren Missouri, which powers 1.2 million electric and 132,000 natural gas customers in central and eastern Missouri. The two companies broke ground last year on a 6.5-MW solar array in New Florence, Mo. The facility features 12,204 solar panels and will generate the energy needs for nearly 1,100 homes. B&M handled EPC work and performed all construction from start to finish.

Adam Bernardi, renewable business development manager for Burns & McDonnell, agrees that renewable and sustainable projects will continue to grow for the foreseeable future.

“As companies strive to achieve ESG goals by adding renewables—like solar and wind—the need for dispatchable generation will be vital to provide reliable energy to their customers and operations,” says Bernardi. He adds that the firm is proud to be providing EPC services for three Alliant Energy solar projects in Wisconsin as part of a path to generating cleaner energy in the state. “Adding storage to charge from the solar plant or be DC-coupled with solar assets is something we’re planning for and consulting customers early on. It’ll be interesting to see how quickly the industry pivots to longer duration as the technology advances through incentives from the recent infrastructure bill.”

The $65-billion Infrastructure Investment and Jobs Act, signed by President Biden in November 2021, is a big investment for anyone in the industry. Especially for a company such as Burns & McDonnell, where infrastructure is a large piece of the pie. Last year the firm took on a progressive design-build water project for the Village of Homewood, Ill.

The project required the design and construction of 2.5 miles of a 30-in. transmission main and booster pump station, transitioning the Village’s water source from Harvey, Ill., to Chicago Heights, Ill. The $11.72-million project was the largest public works project in Homewood’s 129-year history. Burns & McDonnell will also perform a study to reduce corrosion within the water lines and maintain clean water standards for the village.

“From the beginning, Burns & McDonnell stood out,” says John Schaefer, Village of Homewood director of public works. “They had an open book process. With any COVID or supply chain issues they’d call us and say, ‘This may cause the project to go up in price. You OK with that?’ They were upfront every step of the way. We really formed a team with them.”

In addition to clients across the country, the Burns & McDonnell umbrella extends over a family of companies, such as technology and cybersecurity consulting firm 1898 & Co. and industrial construction and prefabrication solutions provider AZCO. In December, Burns & McDonnell also announced a substation alliance with Chicago-based KDM Engineering. The collaboration will provide technical training and mentorship to KDM Engineering in delivering creative, cost-effective solutions for clients across the nation.

“You have big Burns & McDonnell and small KDM, how’s that going to work out? Well, it worked out very well,” says Kevin Swan, KDM director of systems integration. “They came in and said, ‘Hey you all, we have a very good relationship. Where do you want to go?’ It’s been a great opportunity for us.”

Even with record revenue, record sales, a long list of collaborative partners and an even longer list of projects, Burns & McDonnell is not immune to the industry’s problems.

Kowalik and Williams both readily acknowledge the challenges of an unpredictable supply-chain environment as well as finding enough talent to tackle such an ambitious list of design projects.