Six years after moving its men’s ice hockey team from a club sport to NCAA Division 1 status, Arizona State University is committed to challenging some of the sport’s traditional cold-weather powers. The latest milestone in the program’s rapid growth will come when the Sun Devils take the ice for the 2022-23 season at a new on-campus arena.

On track for completion this fall, the $113-million, 185,000-sq-ft facility will feature a 5,000-seat multipurpose venue equipped with a regulation National Hockey League ice sheet, with the arena floor adaptable to host ASU’s wrestling and women’s gymnastics programs as well as concerts and other events. Features include a 24-ft by 24-ft suspended scoreboard and upper-level social deck in the main arena, multiple locker rooms, a 9,000-sq-ft suite for ASU players and coaches’ offices and a second full-size “community” ice sheet for club leagues, open skating and other activities. 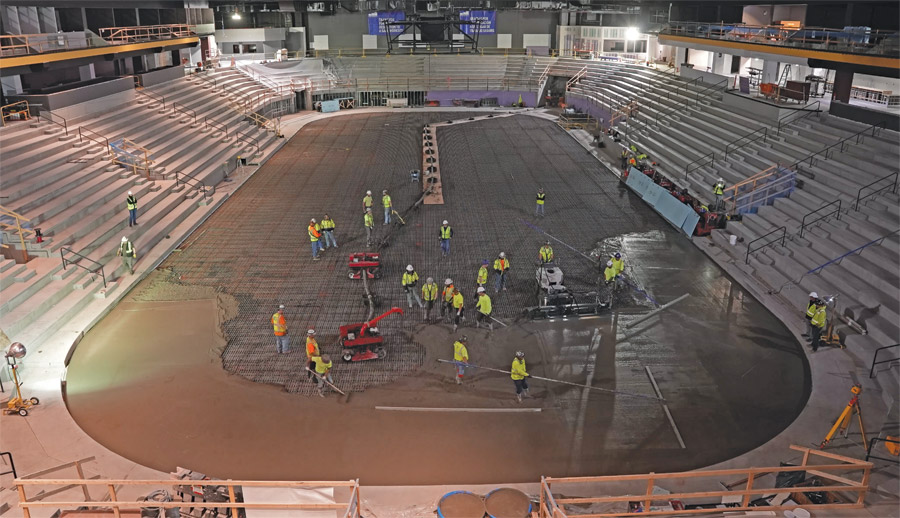 More than 4,000 cu yd of concrete and 192 tons on rebar were used for the facility’s foundation and two ice sheets.
Photo courtesy of Mortenson Construction

“This is hockey at all levels,” says ASU senior associate athletics director/CFO Frank Ferrara, noting that the sport’s explosion in popularity in metro Phoenix ranges from youth leagues to the NHL’s Arizona Coyotes, which will play home games at the ASU facility for at least the next three years while awaiting completion of the team’s own arena.

“It’s not only a great addition to our own program,” Ferrara adds, “but also a way to engage with our students and the community.”

As an anchor for ASU’s new Novus Innovation Corridor, a 330-acre public-private mixed-use development that will integrate with the campus along nearby Tempe Town Lake, the ice hockey facility utilized an innovative funding and project delivery approach. The unique develop-design-build model includes Mortenson Construction, SCI Architects and OVG Facilities, which will operate and maintain the facility under a 30-year public-private partnership (P3) agreement.

“Not all Division 1 ice hockey programs make enough money to complete a facility like this,” Ferrara explains. “OVG will bring the expertise in attracting non-hockey revenue to the facility.”

The main arena provides a variety of seating options, from suites to a dedicated section for students at one end.
Photo by David Huff Photography, courtesy of Mortenson Construction

The excitement ASU hopes to generate at its hockey games in the coming years contrasts with the COVID-driven environment of lockdowns and travel restrictions that isolated project team members as design got underway in early 2020. “The whole design came together on Zoom calls,” recalls Mortenson project executive Ben Spencer. Meeting ASU’s schedule and program goals under those unusual circumstances, he adds, “was a big test of what is possible in the virtual world.”

The design considerations were many, as the university needed to balance its ambitions for the program with cost, schedule and constructibility realities. Tone Frisina, project executive at SCI Architects, explains that from an architectural standpoint, the arena’s 5,000-seat capacity is the “sweet spot” for a college hockey program and a manageable step up from the 800-seat community rink where ASU has been playing home games for most of the last decade.

“It’s a very close, very intimate environment. You can create a great atmosphere with an energetic crowd, yet not worry about empty seats.”
— Tone Frisina, Project Executive, SCI Architects

“You can create a great atmosphere with an energetic crowd, yet not worry about empty seats,” Frisina explains. “It also positions ASU to potentially host NCAA post-season regional championships.”

The design concepts also strive to offer something for all fans, from a dedicated 900-seat student section at the open horseshoe end of the main arena to more than 20 suites lining the sides of the arena just 29 ft above the ice. “It’s a very close, very intimate environment,” Frisina says.

“Though you typically see PEMB in manufacturing or warehouse facilities, we were able to adapt it to a hockey arena while still achieving the same cost and schedule efficiencies,” Spencer says.

Before those designs could be transitioned to construction in late 2020, the team had to address the site’s former life as a landfill that included a large amount of asbestos-containing materials such as roofing and drywall located several feet under the surface. Rather than facing an extensive site excavation up to 7 ft deep and replacing it with an equal amount of expensive fill, Mortenson enlisted a crane equipped with a 15-ton weight to perform deep dynamic compaction across the 120,000-sq-ft building footprint.

Spencer says more than 10,000 50-ft weight drops were needed to push the earth and asbestos layer three ft deeper than its original position.

“We never had to disturb the asbestos,” he says, “yet we were able to move it safely beneath the building footings and underground MEP systems.” 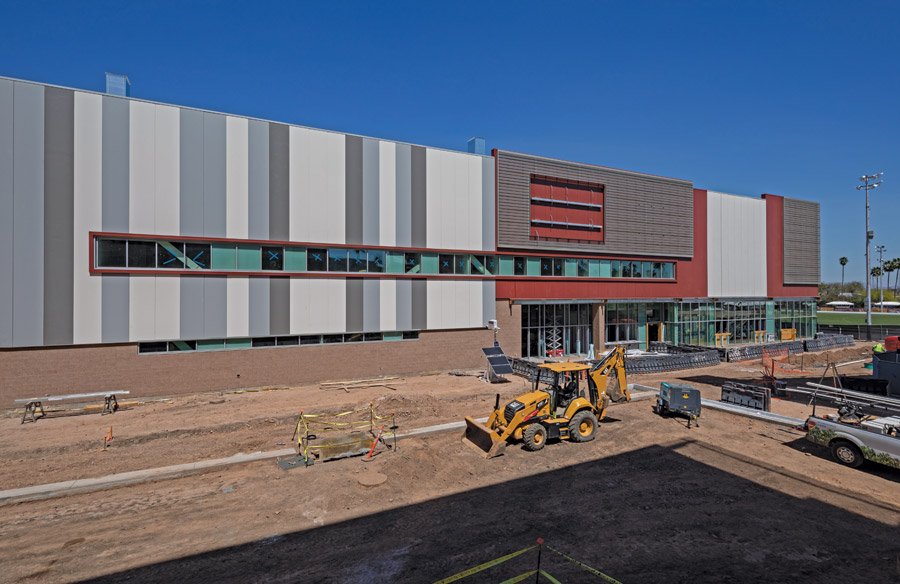 To ensure that Tempe’s high outdoor temperatures don’t affect the quality of the arena ice, all transitions between panels, windows and building systems were precisely detailed to conserve energy and prevent air and water infiltration. A large-scale mock-up allowed the team to test materials, sealants and installation methods before implementing them at the project site.

“The increased transparency of our schedule and visibility of key dates allowed our trade partners to make early commitments of their resources and time, then secure the right materials to abide by that schedule,” he says.

Just 54 weeks after caisson installation got underway, the building’s roof was enclosed, setting the stage for placing concrete slabs for the two ice sheets. Using a specialized mix designed to reduce cracking, each 315-cu-yd slab was placed in a single, continuous pour to prevent cold joints.

Frisina notes that Mortenson’s virtual design capabilities contributed to the expedited process by facilitating trade partner involvement to create a fully designed and coordinated MEP model. That helped to fast-track the schedule and ensure compliance with ASU’s requirement of LEED Silver certification for all new construction.

“It’s been an incredible asset,” he says.

Among the key elements of the building’s energy-efficiency strategy are two large rooftop energy-recovery wheels that pre-condition air entering the ventilation system. Along with reducing energy needs for interior cooling and humidity control systems, the recovery units help keep the ice floor at an optimal range of 58 to 60 degrees. A computational fluid dynamics model optimized building air flow patterns and ensured that systems are correctly placed and energy efficient.

“Without them, hot air would already be inside the building, and the cooling systems would be constantly trying to reduce the temperature,” Frisina says. “This is a huge win for longevity of the building equipment.” 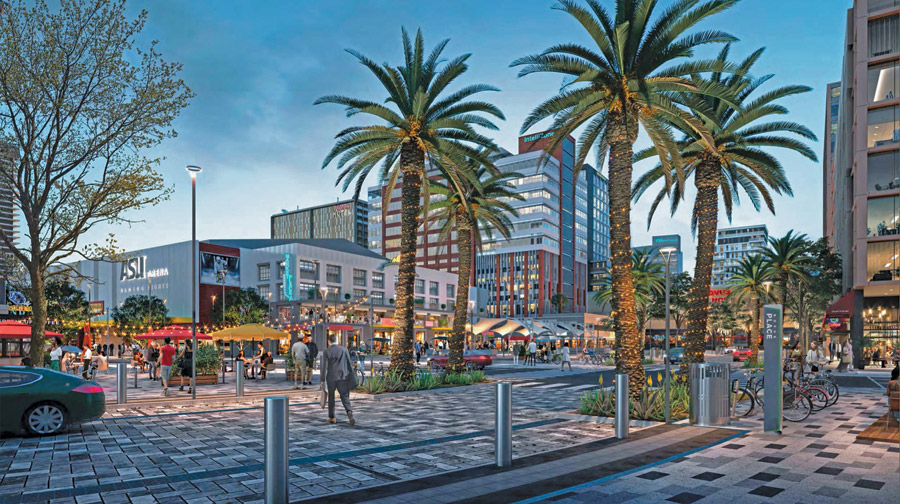 The hockey facility is located within a mixed-use development zone that will integrate Arizona State University’s athletic facilities with office, retail, entertainment and hospitality space.
Rendering courtesy of SCI Architects

Although a project goal was emulating an NHL-level playing environment as much as possible, the opportunity for ASU’s facility to double as an interim home for the NHL’s Coyotes required some in-progress design adjustments that were integrated into the existing construction timeline.

The review process, which began the last week of 2021, yielded changes such as narrowing the spacing of cold floor piping by 0.5-in., from 3.5 to 3 in., to sustain NHL-quality ice. A 310-ton ammonia refrigeration system with three reciprocating compressors and lead and lag pumps will provide upgraded flow rates to maintain the ice along both rinks.

Other upgrades that will be implemented as the building’s interior work is completed include camera technology for tracking players during games using advanced analytics as well as adding camera and media positions for radio and TV broadcasts. A separate 15,000-sq-ft addition is being constructed adjacent to the original facility to serve as NHL home and away locker rooms and team support space.

Funded by the Coyotes, these facilities and other additions will provide ASU with an even more advanced facility than envisioned when the project began.
“We know there are a lot of eyes on us from non-traditional ice hockey markets,” Ferrara says. “We’re showing that our approach can work and be a revenue generator. For ASU, there’s a big emotional bond that makes this project very special.”