In September 2014, Rand Construction Corp. was nearly a decade into its succession plan when tragedy struck. Jon Couch, the company’s 46-year-old president who was selected by founder Linda Rabbitt to lead the next generation at Rand, died in a plane crash in southern Virginia.

Mixed with a deep sense of grief and loss was the uncertainty of the path forward for the then quarter-century-old company. Over the years, Rabbitt had been approached to sell her Alexandria, Va.-based construction firm numerous times, but she chose to hold to the path and keep the company’s culture and core values intact.

Although Rabbitt continued as chair of the board of directors, she was eyeing an eventual retirement. After Couch died, she once again had the chance to sell, but instead chose to regroup and chart a new future for Rand. Within five years, Rabbitt had found her successor in Bob Milkovich, former chief executive officer of First Potomac Realty Trust, naming him Rand’s CEO and cementing the legacy she built.

Looking back, Rabbitt says cashing out and walking away was never an option in her mind. “I couldn’t sell,” Rabbitt recalls. “I raised this baby. It would be like selling one of my children. I wanted to leave a legacy behind with Jon—that was the whole point. I was hell-bent to build a company that could carry on without me. Selling the company would have been the easy way out. Anyone can do easy. Successful people do hard.” 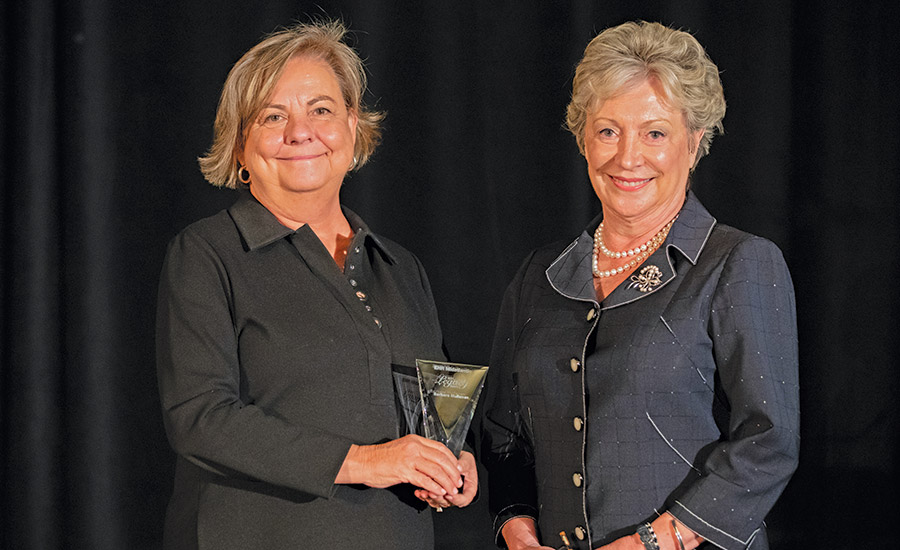 Over the span of her 37-year career, success hasn’t come easy for Rabbitt. As founder of  one of the few women-owned construction companies in the region, she faced numerous barriers, challenges and hardships—professional and personal.

But she built a company that today boasts five locations nationwide with revenue approaching a half-billion dollars annually. Employees and industry peers say her drive, resilience and commitment have inspired not only those within her company, but also her peers in construction and real estate. She has been particularly focused on supporting women in the construction industry, offering the type of guidance that wasn’t available to her when she started her own career. Because of her business accomplishments and her dedication to serve the design and construction community, ENR MidAtlantic has named Linda Rabbitt its 2022 Legacy Award winner.

“I couldn’t sell. I raised this baby. It would be like selling one of my children.”
—Linda Rabbitt, Owner and Board Chair at Rand Construction

Rabbitt’s career in construction was borne out of a business opportunity. In the early 1980s, she was a divorced mother of two who had pivoted from teaching grade school to working in the business world to make ends meet. She landed at accounting firm Peat Marwick Mitchell & Co. (today KPMG), where she worked initially as a secretary and rose through the ranks to director of marketing. In 1985, an acquaintance from the Greater Washington Board of Trade noted Rabbitt’s  business savvy and approached her to co-found Hart Construction. Washington, D.C., was experiencing a building boom, Rabbitt recalls, and she knew she had to seize the opportunity.

“At the time, it wasn’t that I loved construction—the idea was that I wanted to build something and make my way in the business world,” she says. “It was sparked by my years at KPMG and watching business leaders who were clients and entrepreneurs. They were going out and making their way in the world. I wanted that for myself.”

Although she had no previous experience in construction or family connections in the industry, Rabbitt says she learned to love it. “It fits my personality to a T,” she adds.

Three years later, the partnership dissolved, but Rabbitt decided to carry on, co-founding Rand Construction in 1989 with a focus on commercial interiors.  Many of her competitors carried a construction pedigree, but Rabbitt tapped into her business background to establish Rand in the region. “I looked at construction as a professional service, while my competitors looked at it like construction,” she says. “What we were doing was providing a service. The foundation of that was getting the job done and doing it right.” 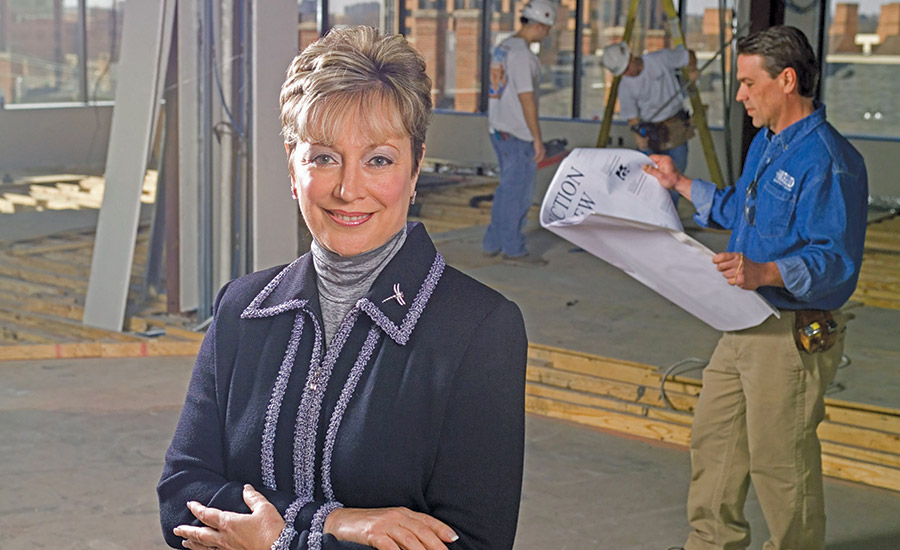 On a Reston, Va. jobsite the year she was diagnosed with breast cancer in 2000, Rabbitt not built her firm into a D.C. power after recovering, she has also expanded to Atlanta, Austin, Dallas and Denver.
Photo by Bruce Buckley for ENR

Through the years, Rabbitt focused on gaining the trust of clients and her employees. “At Rand, I teach that trust is the foundation of business,” she explains. “Once [clients] gain your trust, they don’t question your ability to deliver.”

Trusting her employees has also been a cornerstone of Rabbitt’s approach. “Respect comes from trust,” she says. In 2000, that trust was tested when Rabbitt was diagnosed with breast cancer. “I went to my superintendents and said, ‘I don’t know how long it will take, but please help make sure the clients are taken care of while I get myself well,”’ she recalls.

Rabbitt worked as much as possible during a period that included seven surgeries and four rounds of chemotherapy. She returned to her post full time in May 2001. “People really rose to the occasion,” she adds. “Many of those people are still with Rand today. We believed in each other. We helped each other. We trusted each other.”

In the succeeding years, Rand’s growth took off. The company landed such high-profile commercial interior jobs such as Volkswagen’s North American headquarters in northern Virginia and the Washington Post’s new offices on K Street in D.C.

In addition to becoming one of the largest construction contractors in the D.C. area, the firm has expanded its footprint to Atlanta, Austin, Dallas and Denver. Matt Dausch, regional managing director based in Austin, says trust in people and the process was a central component of the national rollout. Although the company initially pursued an acquisition strategy to fuel expansions, Rand executives decided it was better to retain its company culture and expand organically.

Dausch, who previously owned a company that served the homebuilding sector in the D.C. area, joined Rand in 2011 as an assistant project manager. Two years later, he moved to Austin to launch the new office there. “Linda will gravitate to you if she sees you working hard and producing results,” he says. “If she sees you investing in her company, she’s quick to reinvest that energy back into you and start a mentorship.”

Rabbitt has also established a reputation of being “tough, but fair” with her partners in the trades, says Vincent Browning, president of R+R Mechanical. “There’s a lot of trust going both ways,” he says. “She’s passionate, decisive and boots on the ground. She’s often at the jobsite, making sure we all clearly understand that we’re going to get the job done and be successful. You know if she got a deal and trusts you enough to bring you in as a partner, there’s something to that.”

“If she sees you investing in her company, she’s quick to reinvest that energy back into you and start a mentorship.”
—Matt Dausch, Rand’s Regional Managing Director Based in Austin

Rabbitt’s approach extends beyond her own business, says Greg Meyers, president of Brookfield Properties’ U.S. office operating group. Meyers says that, while Rabbitt is focused on being successful in business, “the way she gets there is by building relationships with people and being helpful to them.” Meyers says Rabbitt is known for taking a personal interest in people and works to make them better, whether she has a direct or indirect business relationship with them.

“Her view is that, if she helps people and helps her community, then her business will thrive because of it,” he says.  “That’s clearly been a successful model.”
To that end, Rabbitt has served on numerous boards of local associations, including the Federal City Council, the Greater Washington Board of Trade, the Economic Club of Washington and the Washington Building Congress.

Rabbitt is also deeply involved in supporting women throughout the industry. She has served as president of both the International Women’s Forum’s Washington, D.C., chapter and Commercial Real Estate Women. She also founded a program at George Washington University called On the Board that teaches women the rules and responsibilities of corporate board directorship. She founded a similar program at the Harvard Business School.

“Linda’s legacy is not only her tenacity and her ability to build businesses, but the responsibility she’s taken in helping other women,” says Barbara Mullenex, managing principal at Perkins Eastman and ENR MidAtlantic’s 2020 Legacy Award winner. Mullenex and Rabbitt are among a group of women in the industry that was founded more than 20 years ago. The group meets quarterly, including a year-end gathering where the members go around and talk about how they helped each other that year. “Men have a long tradition of supporting each other,” Mullenex adds. “Women need to build that tradition as part of our equal role in the universe.”

Roberta Liss, president of the MidAtlantic, north central and Northeast region at Cushman & Wakefield, says Rabbitt’s true legacy is the people she has “helped find a path to be their best selves,” both at Rand and within the industry.

“Linda built this company from scratch and created the family of people who work there,” she says. “Some of her jobsite supervisors have been there from Day 1—and it’s their company now. The family she’s built is the reason she won’t sell the company. She wants them to enjoy it as the next generation. She’s one of the few people I know in construction who successfully built a company from scratch and created a family out of her employees....  She is the real deal.”