This website requires certain cookies to work and uses other cookies to help you have the best experience. By visiting this website, certain cookies have already been set, which you may delete and block. By closing this message or continuing to use our site, you agree to the use of cookies. Visit our updated privacy and cookie policy to learn more.
Home » Decades of Cooperation Deliver Prosper Hospital
Texas-LouisianaTexas & Louisiana Construction Projects
Digging Deeper | Health Care

When Cook Children’s Health Care System’s new full-service inpatient pediatric care hospital opens at the end of 2022, it will be the culmination of more than three decades of progress that resulted in integrated project delivery (IPD) between the owner and general contractor Linbeck Group LLC.

Cook Children’s Medical Center – Prosper is the first greenfield satellite hospital the Cook Children’s system has built outside of its Fort Worth base in its 101-year history. The full-service hospital represents the next step in the organization’s effort to meet the needs of the rapidly growing North Texas region. It boasts more than 60 primary, specialty and urgent care locations across the region.

Project team members include HKS Inc., Smith Seckman Reid Inc., Dunaway Associates, David M. Schwarz Architects Inc., Keller Studios Inc., Fisk Electric and Dynamic Systems Inc. And almost all of these firms have worked with Cook Children’s in the past as part of similar poly-agreement/IPD arrangements to construct other facilities. 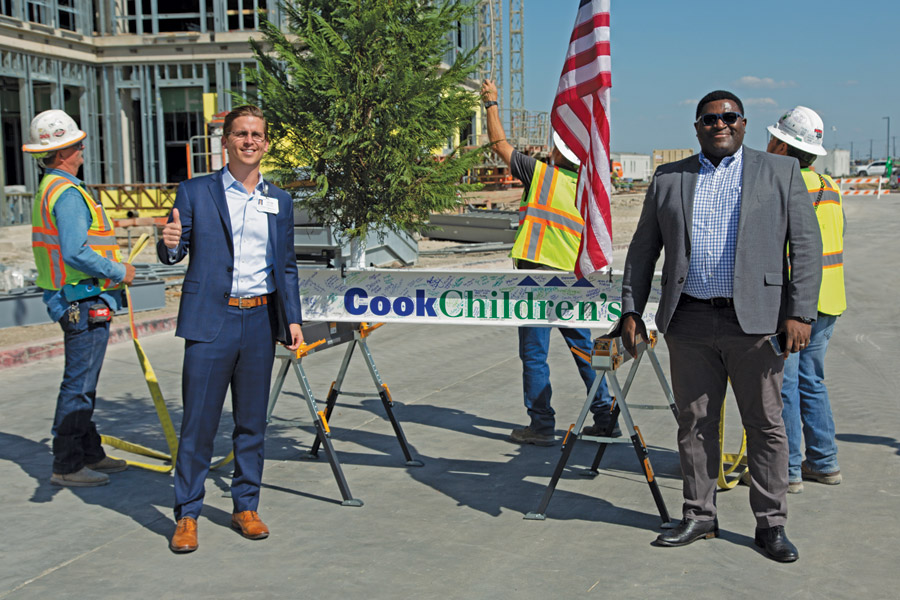 Construction marked a major milestone in October with a topping out event.
Photos courtesy of Linbeck Group LLC

The hospital is Phase II of the health system’s North Campus in Prosper. A 230,000-sq-ft facility on a 23.65-acre site will feature 82 beds—72 medical/surgical beds for low acuity and 10 pediatric intensive care beds. The facility will include an intensive care unit, four operating rooms and three minor procedure rooms, 20 emergency rooms and one CT scan room and one general radiation room. It will also include an infusion center, pharmacy and lab. There will also be major telehealth components—video equipment and a 65-in. television that will allow patients at the Prosper campus to be seen by their physicians at Cook Children’s in Fort Worth. 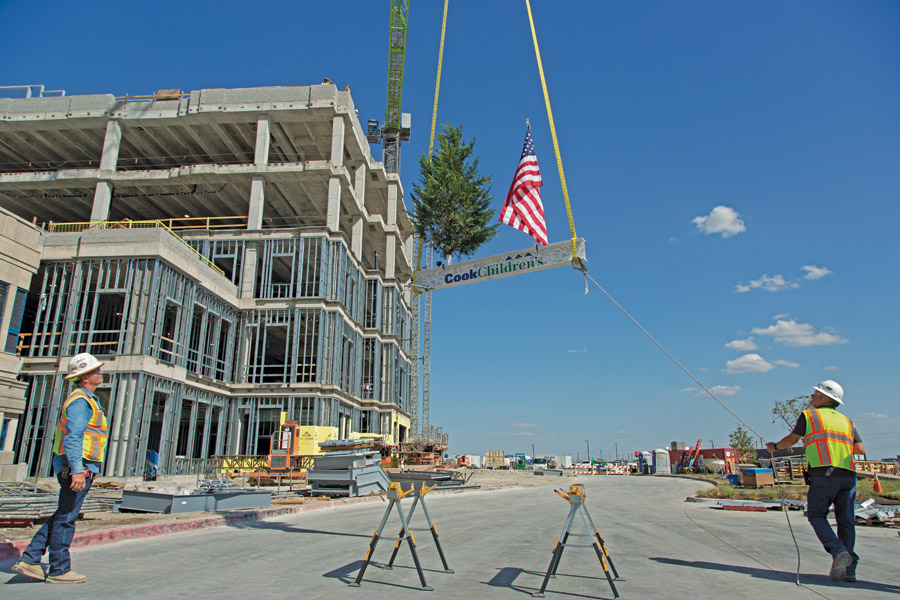 Crews raise the final beam into position during the hospital’s topping out event.
Photos courtesy of Linbeck Group LLC

In 2020, almost 75,000 people moved to North Texas, according to the U.S. Census Bureau. That placed the region behind only Phoenix for new arrivals. Over the past five years, the North Texas region’s population has surged by more than 650,000 people. The demographic increase has created a housing boom, and the epicenter has been in the band of suburbs to the north of Dallas.

“We worked closely with the town of Prosper to help set up the guidelines for construction.”
—Carmen Reynolds, Assistant Project Manager, Linbeck Group LLC

The town of Prosper, with less than 10,000 residents, lies in the path of this demographic wave. It lies approximately 35 miles directly north of downtown Dallas. According to the Census Bureau, Collin and Denton counties (Prosper lies in the former and abuts the latter) each grew by more than 36% between 2010 and 2020. As a result, what was once a rural community is growing fast; developers are putting up housing tracts in the area as quickly as possible. According to Prosper Mayor Ray Smith, the town is expanding at a rate of 30 families per week.

This demographic change is a huge opportunity for Cook Children’s, explains the health system’s director of construction and facilties planning Sam Werschky. The new location allows the health system to address almost all their clients’ needs without requiring patients to travel 60 miles to the Cook Children’s downtown Fort Worth Campus. The Prosper facility will be able to handle all but the most serious cases in-house.

For the town of Prosper, the medical center is its first major building project. For the medical center team, helping the municipality handle the learning curve offered a challenge and an opportunity. In some cases, such as wayfinding and fire lane standards, the needs of a major medical facility didn’t fit the requirements established for a rural community.

“We worked closely with the town of Prosper to help set up the guidelines for construction,” says Carmen Reynolds, assistant project manager with Linbeck. “It required time, but it helped build a better relationship over the course of the project.”

The demographic changes in the service area also mean the facility is being designed with the future in mind. Areas of the complex are being built to shell but not filled in until demand grows enough to require it. This phased approach allows the medical center expansion to be catered to future needs.

Similarly, several of the operating rooms are being constructed but not equipped. With the inevitability of new technology emerging for improved services, the units can be upgraded to accommodate state-of-the-art tech with minimal disruption. 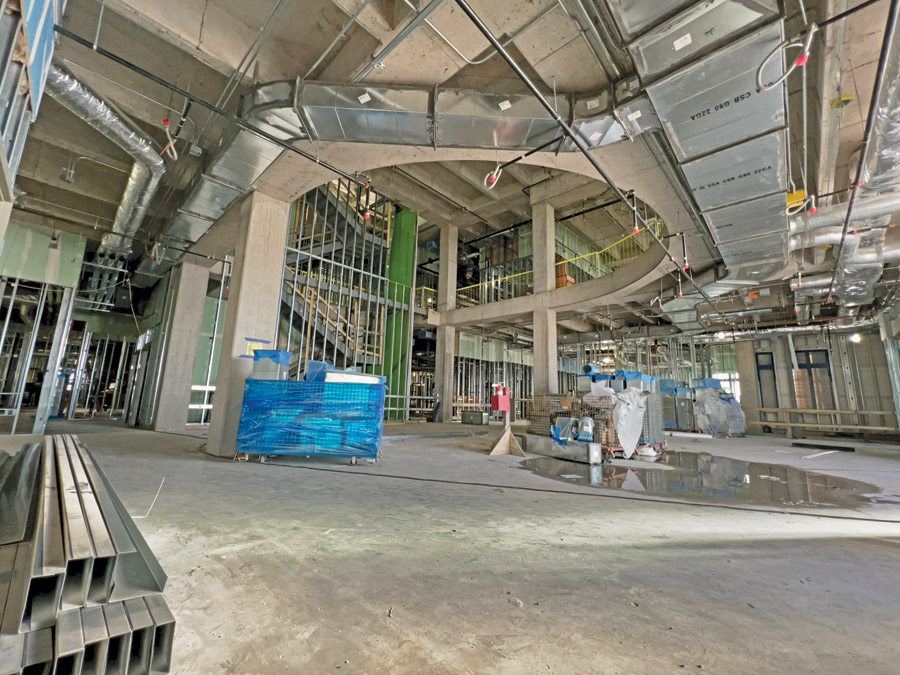 Work continues on the interior. The 230,000-sq-ft hospital is scheduled to open in December.
Photos courtesy of Linbeck Group LLC

At its core, an IPD is a process governed by a multi-party agreement where all disciplines in a construction project work as one unified body. The participants are contractually bound and share both the risks and rewards of delivering the project. Typically, the owner is responsible for the direct costs and overhead, while each of the participants then contribute to a profit pool based on a target price. The risk is similarly shared across the team as rework, inefficiencies or come-back work is paid by the profit pool until it is used up.

The emphasis on individual thinking and group problem-solving was a formidable challenge for early adopters of the process. The need for all parties to become heavily involved in the process for success can be as daunting as the legal requirements.

Cook Children’s first joined Linbeck using an IPD delivery method a decade ago with the construction of a general office building and parking deck on the medical group’s Fort Worth campus. The two firms had a 30 years of experience working together. They were joined by designer HKS, which had previous experience with IPDs.

Ten years later, the group has developed a strong cohesive approach to the IPD process, which made using it for the Prosper project an obvious choice. The scale of the facility as well as the cutting-edge technology it required demanded a high degree of detail and precision in planning.

A key factor to success on IPD projects is involving all participants in the process as early as possible, which was certainly the case with the Prosper facility. This was especially true given the large number of participants involved in the project. When complete, the facility will be the first satellite hospital for the Fort Worth-based health care system.
Photos courtesy of Linbeck Group LLC

“You have to get all the parties on board from the conception,” Werschky says. “When we conceived the idea of the Prosper hospital, we created a document that validated the project.”

That document created the road map for the IPD team to follow. From it, key performance indicators are established that help guide the team and that become the milestones required to qualify for profit sharing. The upshots are fewer field changes, reduced waste and increased reliability across the project.

The communication is bolstered by biweekly leadership meetings where targets are discussed, issues are identified and solutions are found. The meetings are geared to ensure the team members are on track to meet key milestone dates.

“Everybody is rowing in the same boat, at the same speed and in the same direction,” Werschky says.

This familiarity also provides the flexibility to react quickly to handle unexpected challenges. The timing of the Prosper project provides an excellent example. Almost immediately, the project was beset by the supply chain issues and cost increases the entire industry was forced to grapple with last year. Not only did prices rise, but lead times for some items quadrupled.

Linbeck project manager Todd Zdunkewicz says that, by that time, they had been preparing for months to handle these problems. The close relationship with Cook Children’s allowed them to move quickly to address it rather than becoming bogged down in negotiations and contract revisions.

“We are fortunate to have the cash flow to take advantage of the prices like we had to,” Werschky says.

The team sped up the budget contracting, and subcontractors handling specialty tasks were brought onboard earlier. Masonry tradepartner DMG was brought on early to complete the design so timelines could be established and quantities could be better calculated.

As prices and lead times to acquire materials began to increase, the team worked to allocate the cash to acquire needed materials. This process was not part of the original IPD arrangement, but the strong sense of cooperation between the team and the owner ensured the change to the budget was approved.

Concrete, for example, became scarce during the summer of 2020. So, in order to maintain a priority status with manufacturers, the project team began doing larger placements, which increased the size of their orders.

The upfront expense was justified by avoiding even costlier pricing and delays to the project and preserving the profit sharing among the partners.
“It was not as big of an issue as it could have been,” Zdunkewicz explained. 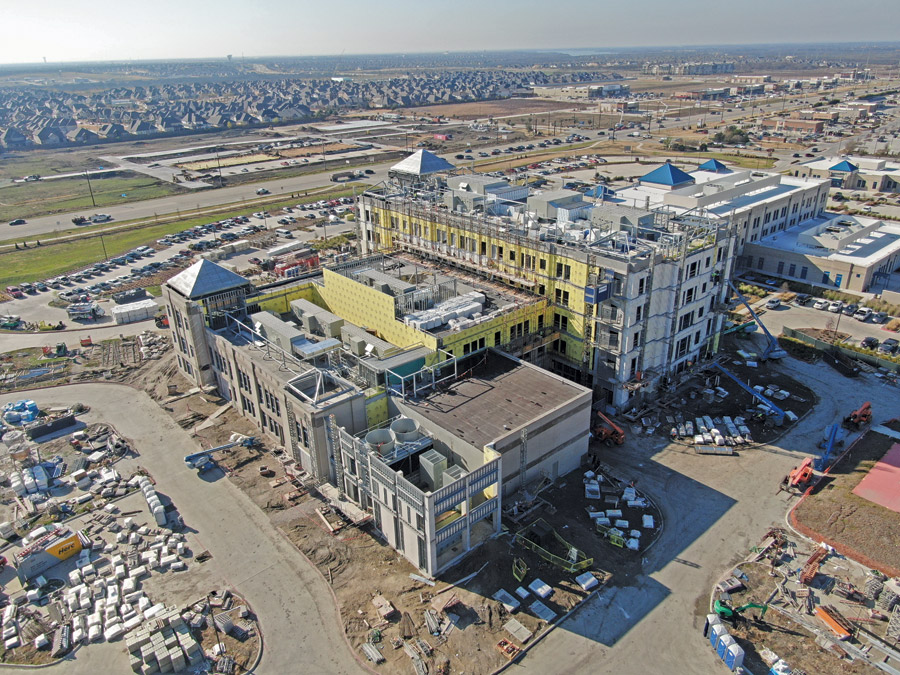 The Cook Children’s Medical Center – Prosper will be the centerpiece of the health system’s 23.5-acre North Campus.
Photos courtesy of Linbeck Group LLC

The importance of communication between team members during the IPD process made building information modeling a crucial tool.

Communication was one of the biggest challenges for the Prosper facility, especially given its complexity. There was a critical need for transparency across the entire IPD team to ensure the project’s success.

“We are fortunate to have the cash flow to take advantage of [material] prices like we had to.”
—Sam Werschky, Director of Construction, Cook Children’s Health Care System

Linbeck previously employed these technologies as part of a $220-million expansion to Cook Children’s South Utility Plant and South Tower in 2015. One major advantage the process provided was speeding up the time to clear RFIs to within hours instead of what can typically be a weeks long procedure.

“It’s a tool to resolve conflicts in the field as well as to plan ahead,” Zdunkewicz says.

The project is regularly scanned and reviewed to ensure ongoing construction matches the spatially coordinated model. The original process provided a single data vault with monitor in the field, a huge step forward at the time. Today, the source model is available to multiple persons on the project site through portable devices.

The result is a process where variances are addressed in the field when identified or escalated to the project team for resolution.

The Prosper project is the first time this team has used a 3D BIM model from start to finish without using a printed set of plans. Project stakeholders expect the model will be useful long after construction is complete as a critical tool for maintenance and upgrade over the life of the facility. Knowing exactly what lies in the walls greatly reduces the disruption of opening them up to find out—a major concern in a health care facility.