This website requires certain cookies to work and uses other cookies to help you have the best experience. By visiting this website, certain cookies have already been set, which you may delete and block. By closing this message or continuing to use our site, you agree to the use of cookies. Visit our updated privacy and cookie policy to learn more.
Home » McCarthy/HITT Deliver $1.7B NGA West Headquarters in St. Louis
MidwestMidwest Construction Projects
Digging Deeper | Government/Public Building

St. Louis nearly lost the headquarters of the National Geospatial Agency, but a fast turnaround construction plan and local leadership saved it

A $1.7-billion federal investment by the Dept. of Defense’s mapping agency in collaboration with the Air Force and U.S. Army Corps of Engineers (USACE) will create a 712,000-sq-ft office and headquarters, parking garages and secure data storage for the agency’s geographic information systems (GIS) and other data. Jobs for 3,000 local employees will move from NGA’s existing south St. Louis facilities, some of which were built in the 1840s. 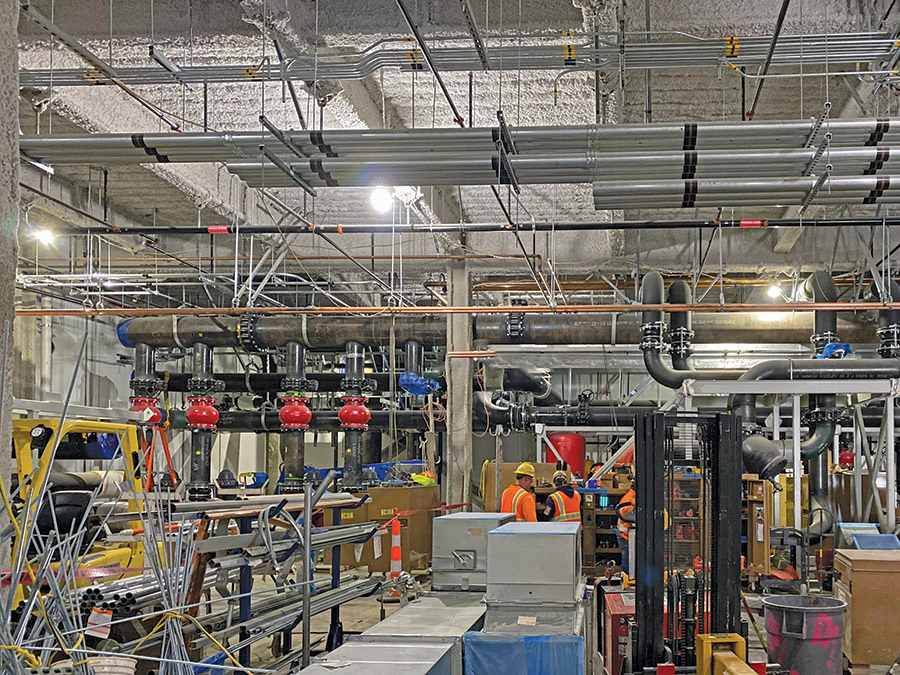 NGA selected this north St. Louis location not only because of the available land, but also to bring development into the surrounding area, which has seen population and local services dwindle over decades of blight.

“Hopefully that sets an example to invest in an area that had previously never been invested in my lifetime,” says Clay, who pushed for more development in the mostly African American neighborhood over a 20-year congressional career representing it. “There’s absolutely no excuse anymore after the announcement of the $790-million city and county settlement over the St. Louis Rams relocation.”

NGA plans to start its one-year fit-out of the building by mid-2024. However, to deliver such a large project—a 700,000-sq-ft main office building, two 6,000-sq-ft parking garages and site civil work—when construction barely began in 2020 was a tall task for joint venture contractor McCarthy/HITT. The security and data needs of the three-story, low-rise office building, which features a penthouse similar to the bridge of a ship, also made it a complex project from the start.

“We wanted to limit the amount of overlap between active construction going on in the building and IT being installed,” says Sue Pollman, program director for the Next NGA West project. “There’s just a lot of risk of breakage on both sides. You have dust and issues that you want to avoid, so we want to make sure the building is completely up and running and it has very stable power before we start putting in the IT.” 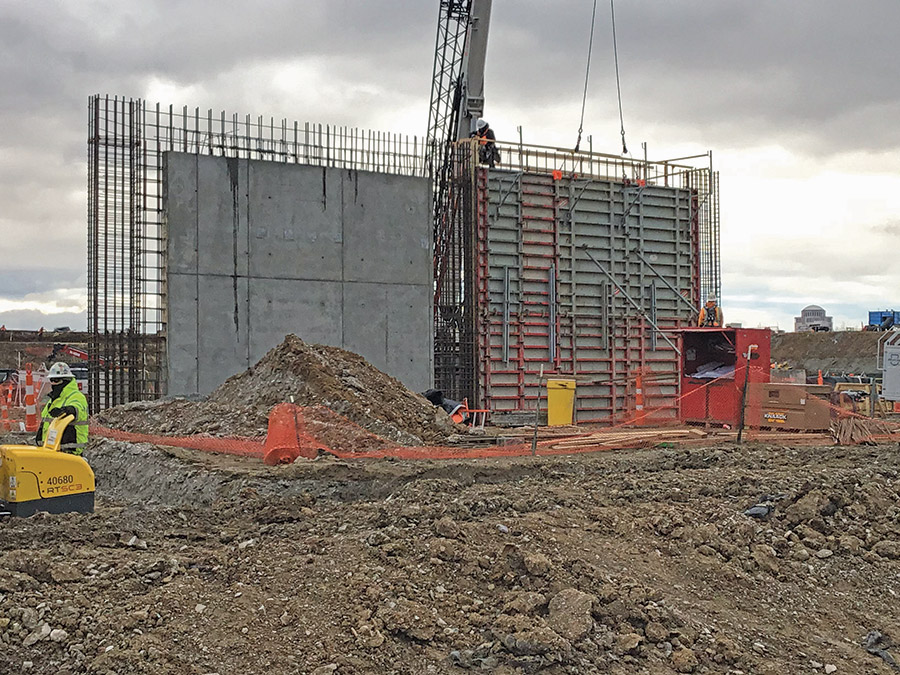 A full year is planned to bring in equipment once construction has completed.

As a project that is being delivered out of the USACE’s Kansas City District, the building had to meet military standards for blast resistance and for resilient and uninterruptible power, while most of the main office building needed to be built to Sensitive Compartmented Information Facility (SCIF) standards. The 16-in.-thick prefabricated masonry and concrete walls of the office building were made in a secure facility by fabricator Enterprise Precast in Omaha.

“There’s really two main designs of tilt-up walls,” says Moss. “One with an acid-etched limestone look and one with inlaid brick.” 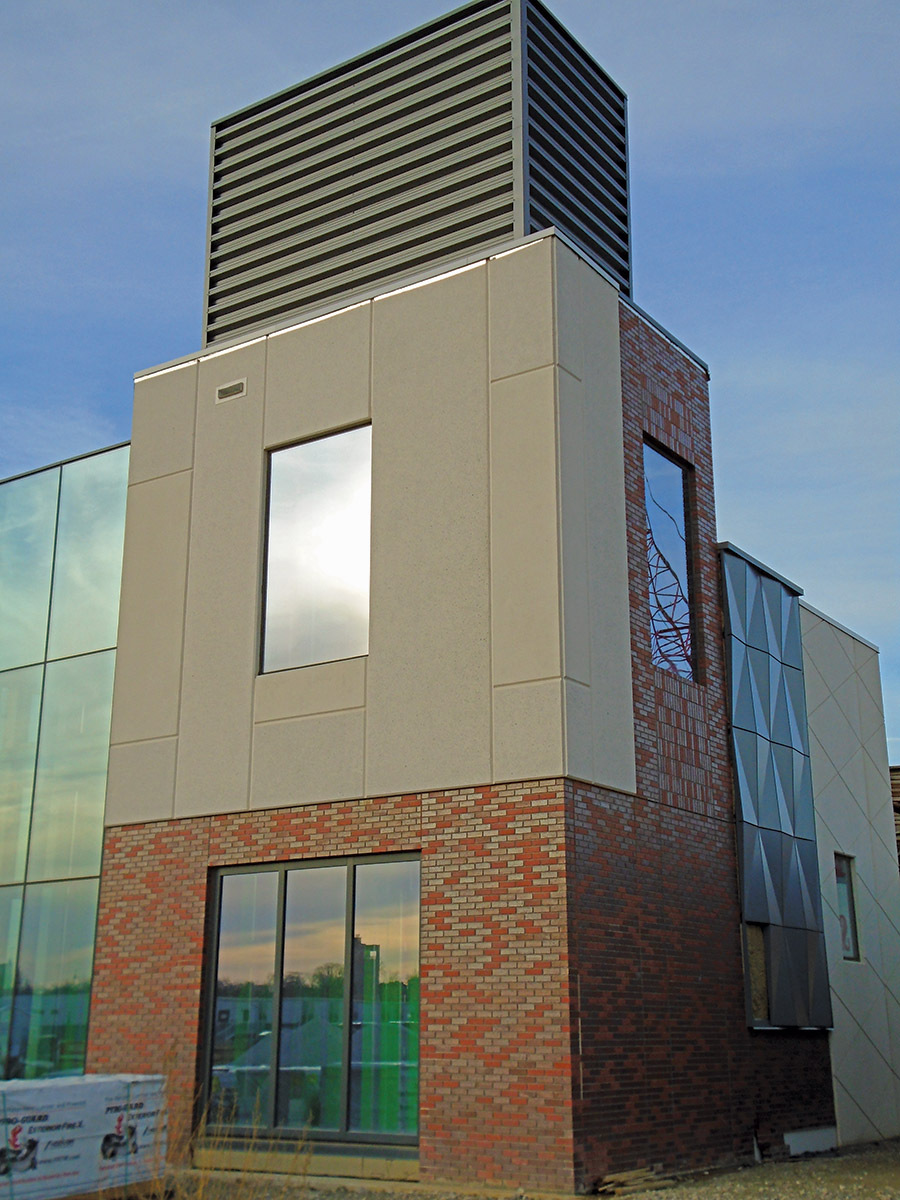 NGA wanted to maintain security while giving employees more natural light and a more welcoming work environment. This onsite mock-up shows how the masonry walls and glass will be connected.
Photo courtesy of NGA/McCarthy Building Cos.

Using prefabrication not only sped up the process of placing the walls around the building’s steel skeleton, but also provided the secure environment the USACE and NGA required. All panels were shipped directly to the site and every truck that arrived was microwave scanned upon entry. Icon Mechanical out of Granite City, Ill., local electrical contractor Sachs Electric and plumbing contractor DeLuca Plumbing are delivering their prefabricated systems for the project in the same way.

“There’s really two main designs of tilt-up walls. One with an acid-etched limestone look and one with inlaid brick.”
—Ryan Moss, Project Director, McCarthy Building Cos.

Sachs has the largest scope of work.

Since most of the office building was required to be a SCIF, it had to be built to classified “Tempest” standards—this National Security Agency specification and NATO certification aims to prevent spying on information systems through leaking emanations, including unintentional radio or electrical signals, sounds and vibrations. Tempest standards, in the case of Next NGA West, cover how to shield equipment against spying. That meant using radio frequency (RF) shielding—a mixture of nickel, copper and cobalt coated on a nylon fabric—insulating the walls, ceilings and floors of the secure areas.

“The facility is basically a large SCIF with several other SCIFs within it. And they put a lot of that [RF shielding material] to work,” Moss said. 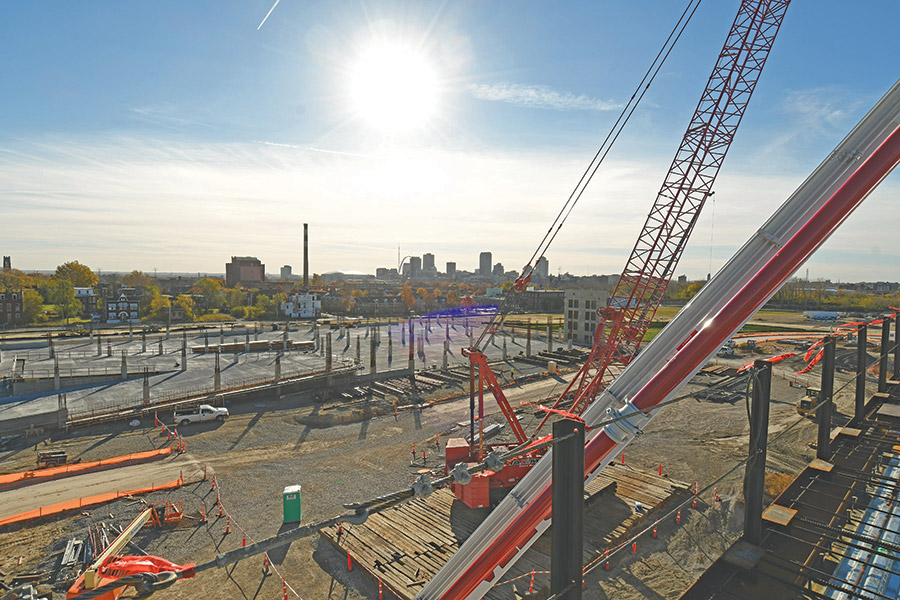 With a 97-acre site, space was not at a premium, but multiple cranes placing steel and prefab concrete walls had to coordinate to ensure safe operation.
Photo courtesy of NGA/McCarthy Building Cos.

RF shielding isolates electrical devices within the building from their surroundings and isolates cables and wires from the environment through which they run. Moss says that HITT’s expertise has helped with the SCIF construction. There are 65 full-time McCarthy crew members on the project and five from HITT.
“They’ve been a good partner for us. They bring a lot of good federal information and expertise, especially when it comes to SCIF boundaries,” he says.
McCarthy was able to save time by self-performing all of the concrete work in the building and the two parking structures.

Meanwhile, 1:1 scale mock-ups showing how the security glass interacts with the tilt-up masonry and limestone/concrete wall panels were also built on site and approved by USACE and NGA. 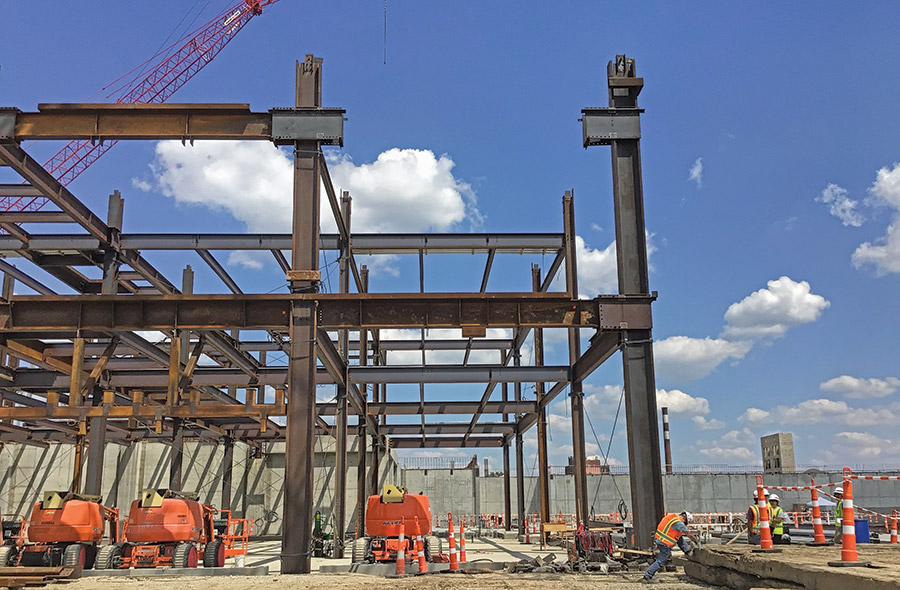 Lifts at the ready for assisting ironworkers in welding steel members into place for the frame of the main office building.
Photo courtesy of NGA/McCarthy Building Cos.

As for the development that former Congressman Clay, Sen. Roy Blunt and others hoped to see come to the area along with this new secure facility, major geospatial intelligence firms including MAXAR, Ball Aerospace and T-Kartor USA have all announced new offices in St. Louis since the project was announced. Westway Services Group recently leased 75,000 sq ft in the city’s Globe Building to construct multitenant SCIF and Secret Collateral office space, the largest SCIF in the nation outside of the Washington, D.C., area.

For the people of north St. Louis, however, a better indicator will be what springs up directly around the project.

“Now there is no excuse not to invest there,” Clay says.