This website requires certain cookies to work and uses other cookies to help you have the best experience. By visiting this website, certain cookies have already been set, which you may delete and block. By closing this message or continuing to use our site, you agree to the use of cookies. Visit our updated privacy and cookie policy to learn more.
Home » New Colorado College Arena Links Campus, Downtown
Mountain StatesMountain States Construction Projects
Digging Deeper | Sports

The Ed Robson Arena and Yalich Student Services Center at Colorado College pays homage to the past while celebrating the start of a new era. Although hockey is a proud and storied tradition at CC, when the Tigers took the ice at the arena’s NHL-size rink in September, it was the first time the team had played a game on campus in the program’s more than 80-year history.

Designed by JLG Architects and built by Nunn Construction, the 270,000-sq-ft building not only features the home ice for the school’s Division I hockey team but also will share space with intramural sports, club teams, student life activities, academics and community hockey and figure skating.

The 3,400-seat multipurpose arena also will host regional, national and international events in partnership with the U.S. Olympic Committee, and while the seating capacity is less than half that of the city’s World Arena, a venue south of town where Tiger hockey was played until now, the new venue is more appropriately sized for the campus’ 2,000-student population, says JLG principal Adam Davidson.

“It’s a homecoming of sorts, seeing the student section completely filled. And it creates a sense of place for the greater good of the community,” he adds. 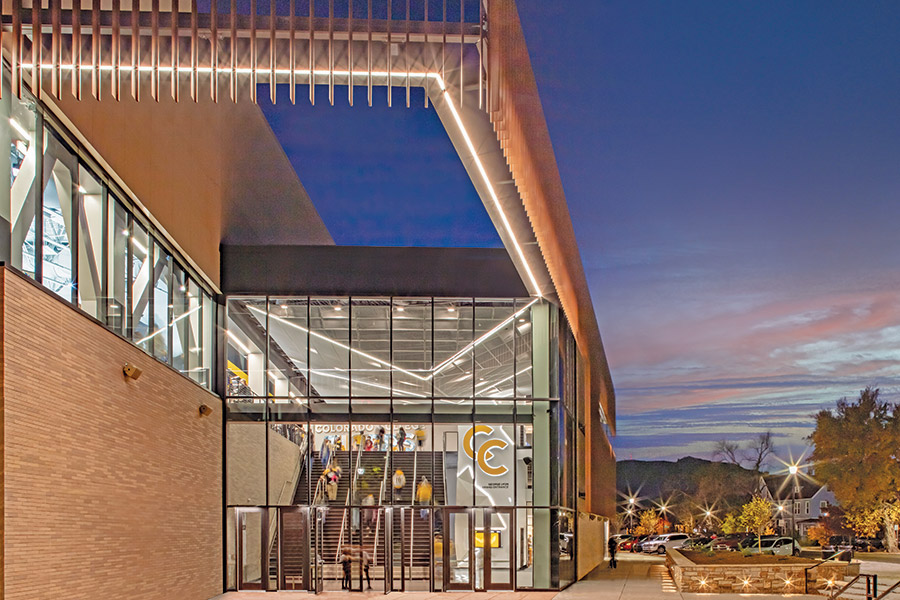 Terra cotta was the inspiration for the aluminum, perforated fin facade, tying it visually to the nearby Garden of the Gods nature area. Other elements were inspired by campus buildings.
Image Courtesy of JLG Architects

As part of the City for Champions (C4C) initiative in Colorado Springs, the project was envisioned to help bolster the local economy by connecting the campus to the downtown core. The C4C initiative uses revenue made available by the state’s 2013 Regional Tourism Act as seed money to invest in new facilities to draw tourists to the region, and the Robson Arena is the fifth project in the program. Funding for the arena was made possible by a large gift from CC hockey alumnus Ed Robson as well as C4C and other donors. 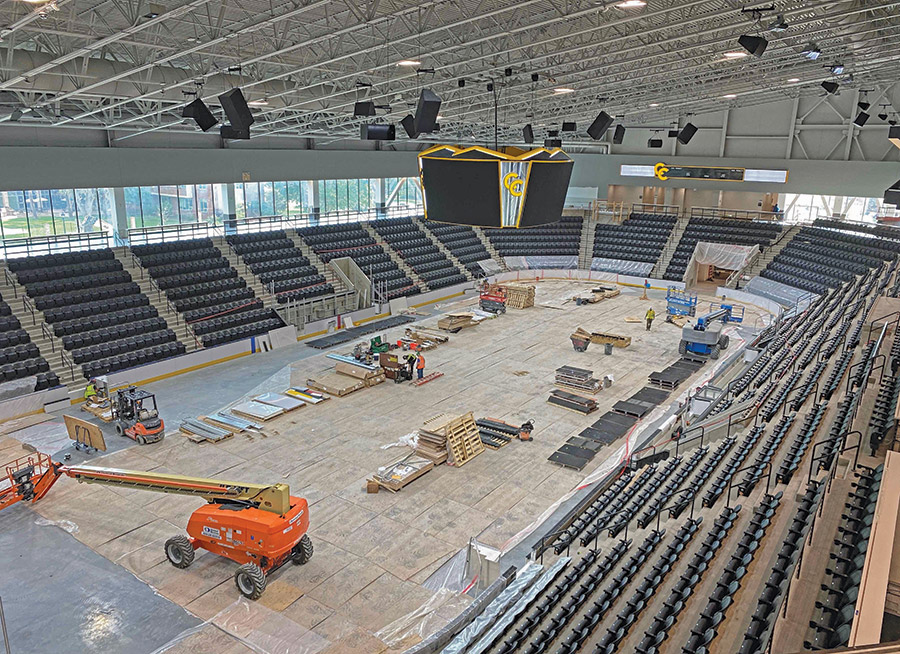 From the beginning, the project was about more than just hockey, Davidson says. The vision was to create a sense of place that would allow hockey and athletics to compete at the national level while serving the needs of the broader campus and Colorado Springs community. Encompassing a full city block, the sports complex was designed to keep the student experience in mind, “right-sizing it for both the community and campus,” Davidson says.

“How it connects to the outdoor nature of Colorado College with stone and natural elements and where it sits on the Front Range [helps to] respect the past and celebrate the new experience,” he says. Terra cotta was the inspiration for the aluminum, perforated fin facade, tying it to the natural beauty of its surroundings and the nearby Garden of the Gods nature area, while other elements take inspiration from existing campus buildings. 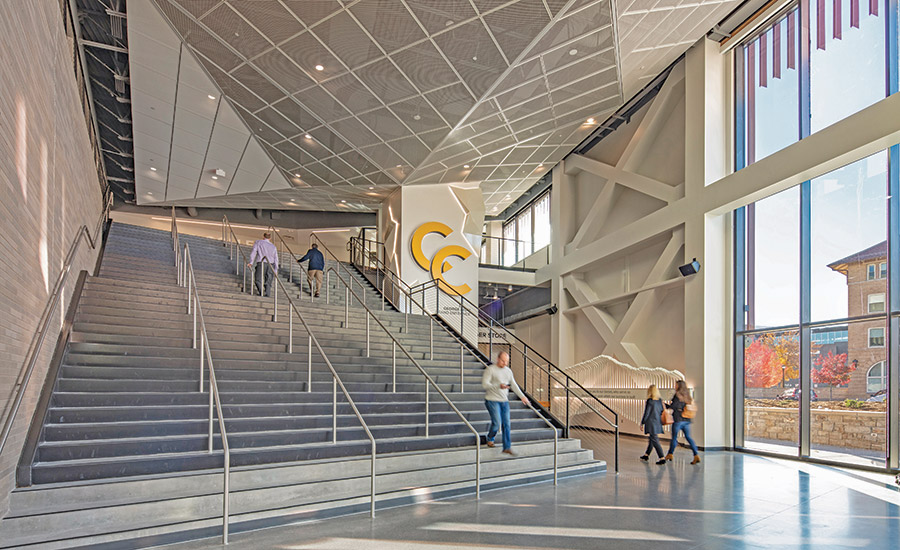 The intercollegiate hockey complex shares space with intramural sports, club teams, a restaurant and a bookstore, creating a hub for student life on campus.
Image Courtesy of JLG Architects

More importantly, the versatile arena connects Colorado College to the downtown neighborhood in a significant way: The multipurpose event and meeting space includes an outdoor plaza and will play host to art and music events and student life activities for the campus and surrounding community. The adjacent Yalich center includes the school’s health and well-being services, the college bookstore and mail center, an art studio and restaurant space.

“The project’s design went through several iterations to determine how to make the best use of that city block,” explains Amber Branigan, associate vice president of facilities for Colorado College. To the north and east of campus are well-established neighborhoods with beautiful old Victorian homes, and part of the success of the project, she says, was the front-end work related to community outreach and the setting of expectations for neighbors. Nunn created a monthly newsletter to keep the neighbors updated about progress and provided ongoing communication throughout the project.

Branigan says the community-based elements are a huge success, bringing people to campus for dining before and after the games. The bookstore, previously buried in a basement, is now a highly visible storefront and “jumping before games as we’re getting [Colorado College] gear into people’s hands,” she says.

Because the structures were being built concurrently, construction of the arena, parking garage and adjacent Yalich center required strategic phasing measures to ensure crews were not on top of each other while staying cognizant of time and site restraints.

“At any one point we were finishing one part while erecting another,” says Vinnie Mattivi, senior project manager at Nunn. “You could walk through an area being painted to an area without structural steel up.”

“At any one point we were finishing one part while erecting another. You could walk through an area being painted to an area without structural steel up.”
—Vinnie Mattivi, Senior Project Manager, Nunn Construction

And because the project site is “in the heart of a college campus within a residential neighborhood within a downtown setting, [construction challenges] included a little bit of everything, from coordinating with downtown traffic and multiple cranes on site to working closely to communicate with residential neighbors about the project’s progress,” he says.

With so many moving pieces, the biggest concern was how to keep everyone safe. The arena’s structure features CMU stair cores and structural steel, and it also required a precast component, which added another coordination and sequencing item, Mattivi says. Nunn’s solution was a sequence that involved five 500-ton cranes on site as well as truck delivery paths to allow the steel and precast crews to erect the main bowl of the arena at the same time as the structural steel for the building.

“We left out a section of steel to allow for both precast deliveries and steel deliveries to access next to the crane. Once we had most of the bowl erected, both cranes moved out to the far west side of the site and erected the last area,” Mattivi says.

Pandemic-related material supply challenges also required additional processes like procurement tracking, and whenever there was a delay, the team had to pivot. “For example, when insulation was delayed by months, we had to change our plan midstream and do a 180,” Mattivi says. 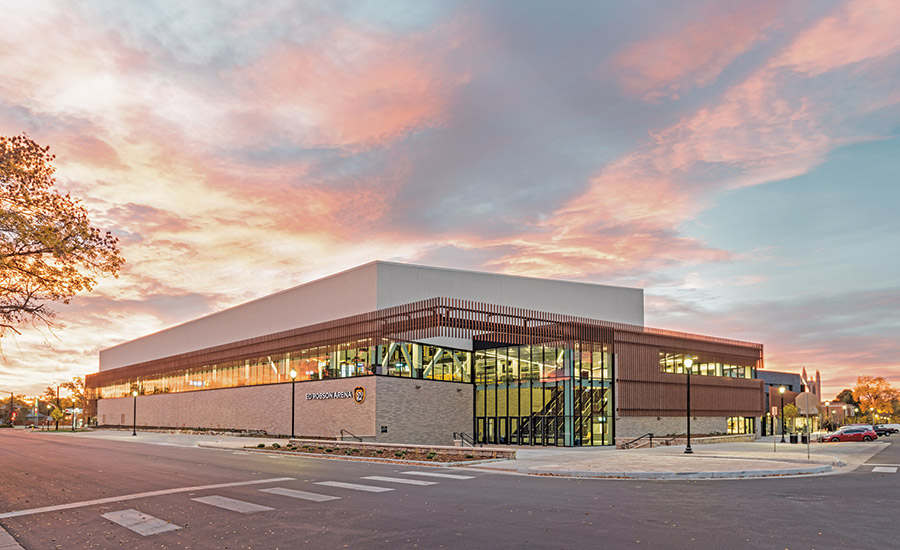 The architect’s vision created a space that allows the hockey program to compete at the national level while boosting neighborhood and downtown connections.
Image courtesy of the Unfound Door

Value engineering for the arena proved to be an extensive process to align the desired features and design materials with Colorado College’s budget. Nunn worked closely with both the college and design team to reduce the budget by almost $7 million without sacrificing the overall look and quality of the arena. Creative solutions varied from slight changes in materials to different lighting packages as well as expanding the subcontractor pool for bidders to increase competition and get better pricing.

“We had to make sure most of the work above the ice was completed before prep work for the refrigeration and ice slab.”
—Dan Lonski, Nunn Construction

Nunn also brought in mechanical and electrical trade partners during the design development stage to assist with the constructibility process of the mechanical room. It was a tight area, and numerous trades needed space for their equipment and piping, says Dan Lonski, the project’s senior superintendent. Nunn used the BIM process to coordinate and prefabricate much of the work to cut down on time spent trying to shoehorn material into place.

“Being able to fabricate the pipe off site allowed us to more efficiently install everything required for the chillers and pumps designed to complete this fully functioning sheet of ice. Had this not been realized in the coordination phase, the possibility of oversight could have resulted in costly redesigns and re-installations of systems, delaying the schedule and inflating the budget,” Lonski says.

The sequence and flow in and around the arena’s ice was another critical piece of the project. “We had to make sure most of the work above the ice was completed before starting prep work for the refrigeration and ice slab,” Lonksi explains.

The complex and multistep process of the ice construction phase included more than 10 miles of piping and 420 cu yd of concrete placed in one continuous pour to make sure there were no cold joints in the floor. A 28-day curing process entailed covering the slab with water cure blankets, which was followed by five days of around-the-clock work to make the ice. Three chillers and multiple pumps were used to cycle the refrigerant through the miles of piping to reach the required thickness and maintain the ice temperatures. 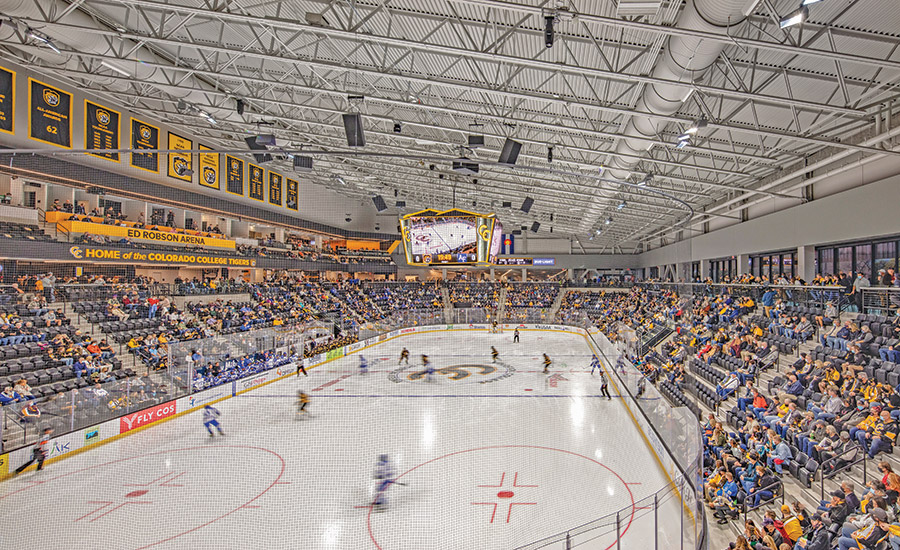 The 3,400-seat venue is right-sized for the campus’ 2,000-student population, creating a packed-house on game days and ramping up school spirit.
Image courtesy of JLG Architects

“The project was continuously analyzed throughout design to ensure the building met the current and long-term goals of the building and the campus, which was to lower energy consumption, work toward carbon neutrality in being solar ready, and a positive performing system that went above code minimum and was robust, easy to operate,” he says.