As a showcase to display the international collections of modern and contemporary art at the Museum of Fine Arts, Houston, the $153.7-million Nancy and Rich Kinder Building was designed to be a work of art itself.

Featuring 237,000 sq ft of exhibit space, the building is replete with architecturally significant elements, including a glowing, translucent facade made of 1,100 semicircular glass tubes and a scalloped roof consisting of 23 different structures to resemble the “billowing clouds of Texas.” Beneath the building, two underground pedestrian tunnels—featuring light installations and art exhibits—connect the Kinder Building to the five other buildings on the museum’s campus.

The Kinder Building’s project team used innovative technologies and modeling to put together the unique features and materials for this urban landmark.

“There were lots of little things here and there, and each one of them is a challenge in itself. And then when you put them all together, it took a lot of teamwork to pull it all off,” says Brian Luney, project director for McCarthy Building Cos., the general contractor. Other key members of the project team included: Steven Holl Architects, lead design firm; Kendall Heaton Associates, architect; and IMEG, structural engineer.

The Kinder Building is the centerpiece of the 13-acre museum’s $476-million expansion, billed as North America’s largest cultural construction project in a decade.

“The MFAH wanted the new building to advance the idea of what a museum building for the display of contemporary art could be in the beginning decades of the 21st century,” says Willard Holmes, chief operating officer for the museum. 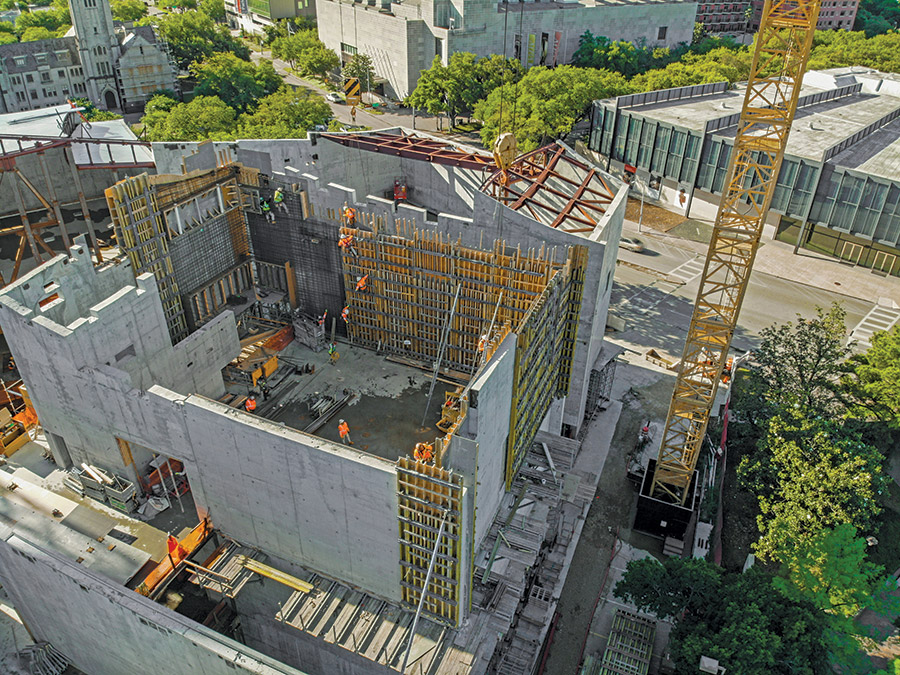 Crews build out the Kinder Building’s concrete structure, consisting of vertical, cast-in-place walls, ahead of installing the building’s glass façade.
Photo courtesy of McCarthy Building Cos.

Members of McCarthy’s team and the architect traveled to Germany and China to view mock-ups and ensure the quality of the glass tubes before installation.
Suspended on a metal framework sitting 2 ft off the concrete structure of the building, the tubes create a “cool jacket” that shields the concrete from the sun’s heat and creates a convection current of air that moves behind the tubes to cool them. 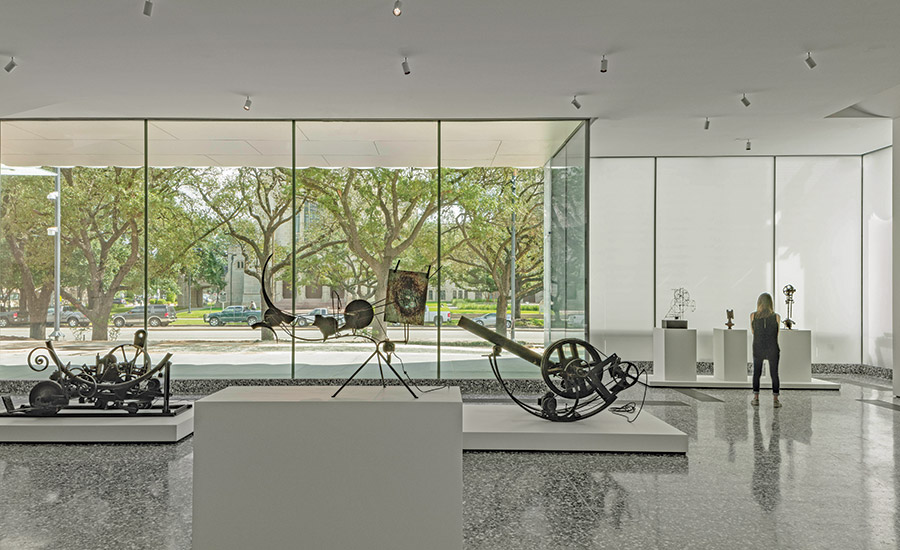 For this system to work, the tubes needed to have enough structural strength to withstand hurricane-force winds but still be transparent enough to allow the LED lighting behind them to create a soft, lantern-like glow. The tubes also had to be built to exacting tolerances to allow for a 1/2-in. gap between each of the 1,100 tubes across all four sides of the 175,000-sq-ft building’s complicated concrete form.

“The glass tubes that cover the building were a key element in creating a facade that helped integrate the building into its surroundings throughout the day and evening, but [they] were also an important element in helping maintain the ideal interior climactic conditions for the collections in the harsh heat of Texas summers,” Holmes says.

The tube facade reduced the building’s solar gain by 70% and became an important sustainability feature of the project, which is pursuing LEED Gold certification.

“The museum set out to build a building that would advance the understanding of what a 21st-century museum exhibition building could be,” Holmes says. “In doing so, we looked not just at the architecture of the building, but its continuing operations and how we could be as creative in thinking about sustainability as we [are in thinking about] design.” 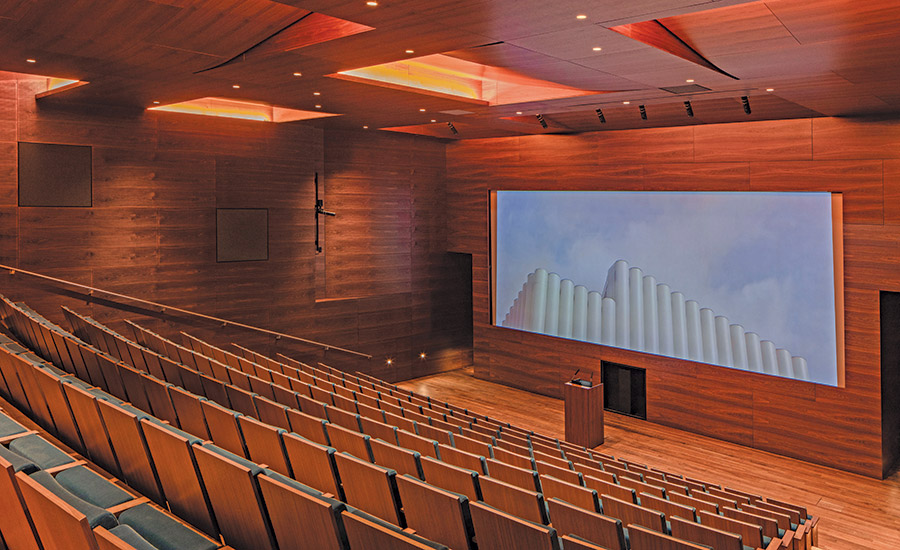 To add visual interest to the top of the building, Stephen Holl Architects designed an intricate, one-of-a-kind roof consisting of 23 separate structures. IMEG and GNA Architects engineered a roof system of rolled steel trusses that worked with the building’s concrete structure.

The roof’s geometry consisted of different curved planes of varying radiuses, creating clerestories between the high and low sections of the roof that allowed natural light to slip into the building and into the galleries on each floor.

“It looks like Tinker Toys that all sit on and connect to one another,” says Laurence Burns, principal with Kendall/Heaton Associates. “A big issue was which piece went in first, and how you held up all the other pieces until the last piece sort of locked it all together.” 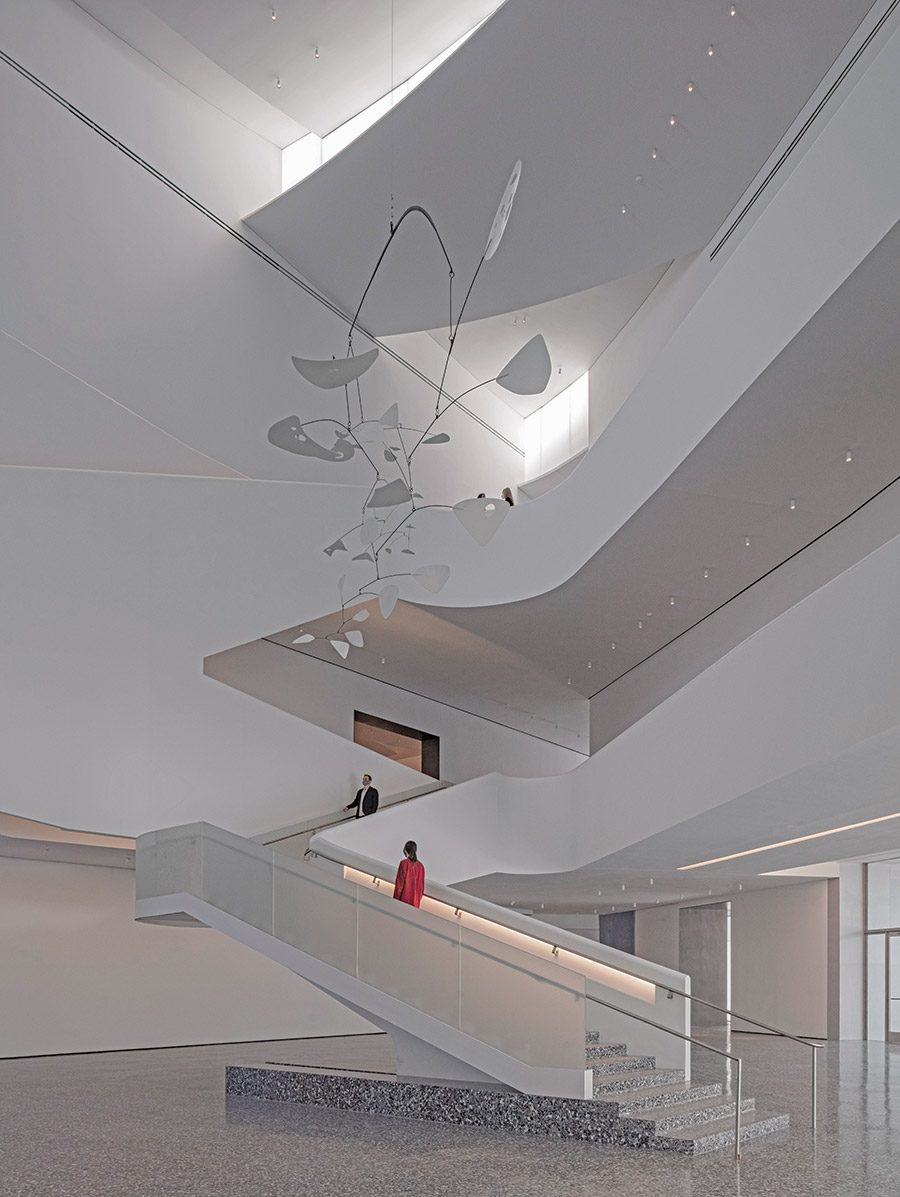 The installation of the roof required a formal steel erection plan and extensive reshoring to hold in place the 25-ft vertical cast-in-place concrete walls supporting it.

The team had to factor in drainage at each of the roof sections. Plans called for minimal drain piping over the exhibition galleries to protect the art, and as a result, most of the roof sections were sloped to perimeter trough drains or to downspouts in the cavity between the glass tubes and curtain walls.

“The museum set out to build a building that would advance the understanding of what a 21st-century museum exhibition building could be.”
—Willard Holmes, Chief Operating Officer, Museum of Fine Arts, Houston

The structural engineer devised a complex system of curved custom I-beams milled in varying shapes to go on a 9-ft by 9-ft grid and create a paneled roof system for the roof’s slopes, allowing the roof to emulate curved clouds, Burns says.

The team then installed clerestory glass within this structural system to allow natural light to flow throughout the museum’s interior. Although the double-helix glass was delivered to the jobsite flat, the project team was able to cold-bend the glass so it would conform to the geometry of the roof structure.

“Curves were the theme of the building, whether it was the glass tubes or radiuses of the clerestories on the roofs or the actual roofs sloping as well as within the building in the tunnels,” Luney says. “We had a lot of curved framing to create some complex geometry.” 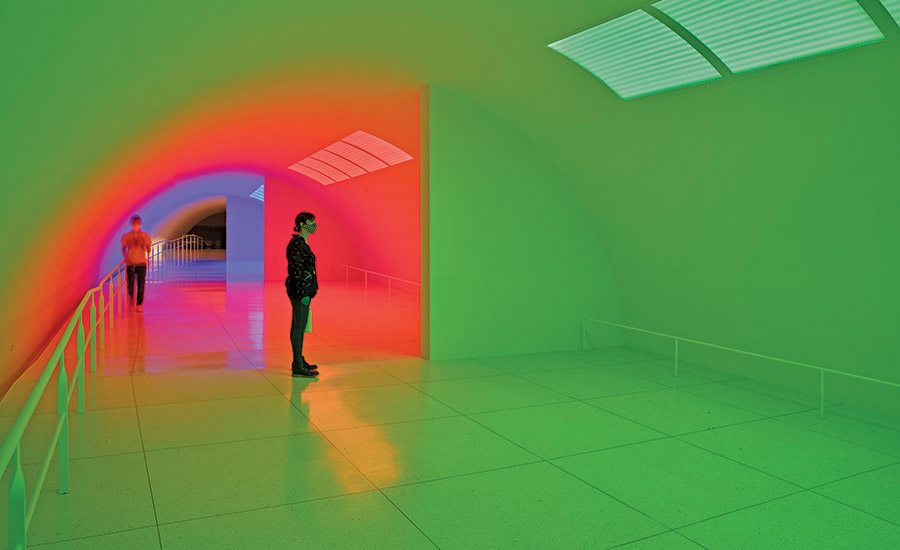 The team also relied on Rhino’s software to create the two underground pedestrian tunnels that connect the Kinder Building to the rest of the campus.
One of the tunnels runs underneath busy Bissonnet Street, and the team had to take extra care in designing and constructing it.

Crews dug the 130-ft tunnel in 6-in. sections and were able to complete the excavation without interrupting the traffic above. 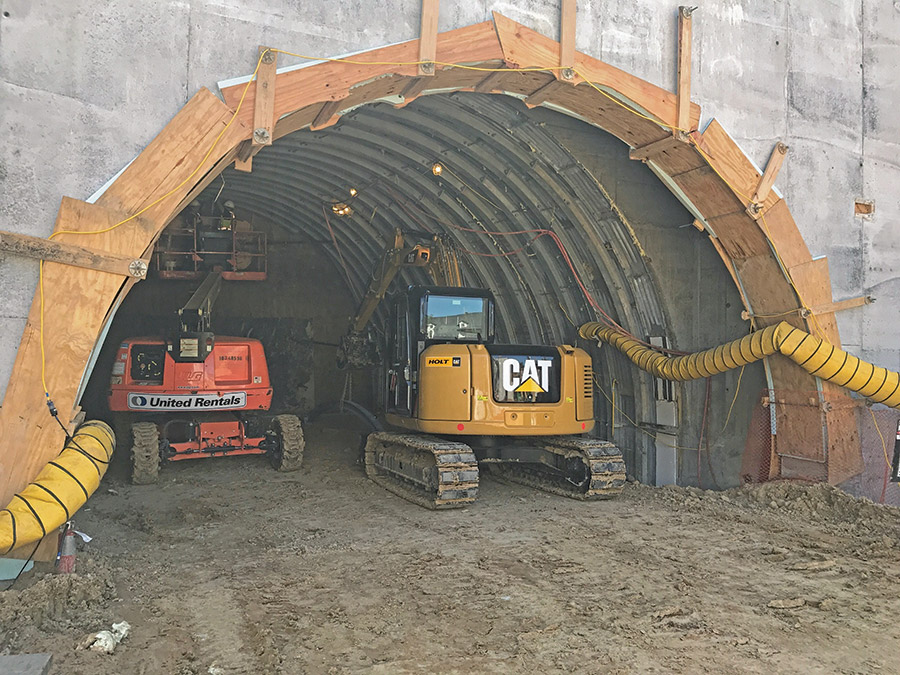 Crews dug a 130-ft tunnel in 6-in. sections and were able to complete the excavation without interrupting the traffic above.
Photo courtesy of McCarthy Building Co.

“They can only go so far at a time because the earth has to support itself,” Luney says. “And then they put these plates in that are interlocked together and structurally designed on a semicircle to hold up the earth as we go [to avert the risk of the earth] collapsing.”

The team had to work around numerous utility lines underneath Bissonnet Street while also protecting the large live oak trees alongside the building.
“We had to not hit those lines,” Burns says. “Some had to be lifted. Some had to be relocated. And that was another very challenging part of the project—working with all of the different utilities to make sure that when they did start building the tunnel, there were no conflicts with the existing utilities.” 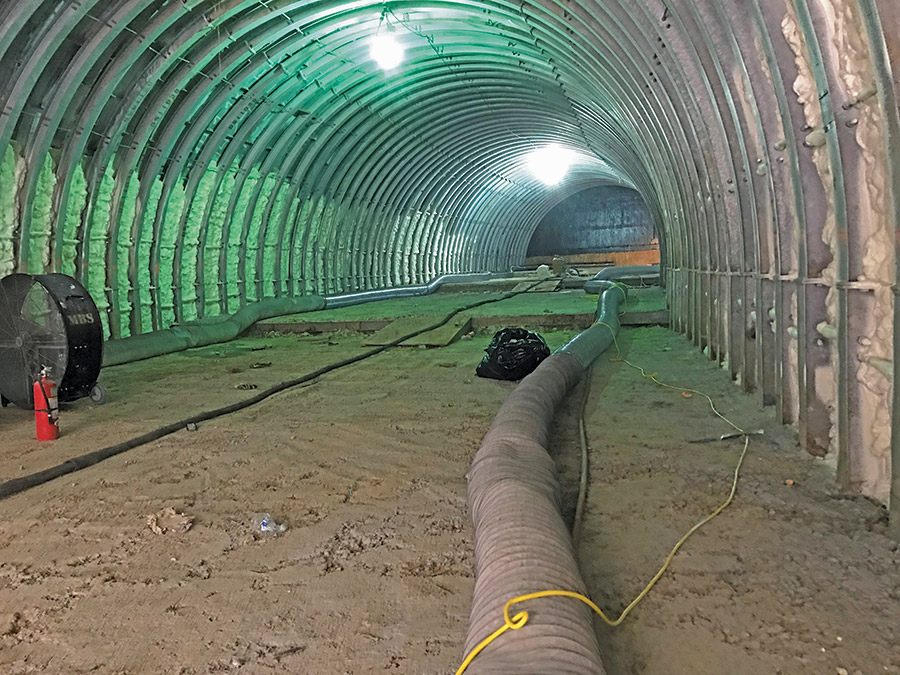 Crews dug a 130-ft tunnel in 6-in. sections and were able to complete the excavation without interrupting the traffic above.
Photo courtesy of McCarthy Building Co.

Hurricane Harvey in August 2017 and the start of the COVID-19 pandemic in 2020 created unforeseen obstacles at the beginning and the end of the project.
Six months into construction, as the team had just finished excavating a parking area two floors underground, heavy rains from the hurricane caused massive flooding at the site. “All of the water in the area seemed to drain into the excavated Kinder Building site,” Burns says.

McCarthy worked with the museum to help with remediation work, and ultimately there were minimal impacts to the overall project schedule.

Then near the end of the project, the COVID-19 pandemic resulted in supply-chain challenges that made it difficult to get parts and pieces from around the world.

“Some materials were unable to get here, so we had to make some changes on the fly, but it all worked out,” Luney says.

Through detailed planning and work sequencing, the team was able to complete the project ahead of schedule, and the Kinder Building opened to the public in November 2020.