This website requires certain cookies to work and uses other cookies to help you have the best experience. By visiting this website, certain cookies have already been set, which you may delete and block. By closing this message or continuing to use our site, you agree to the use of cookies. Visit our updated privacy and cookie policy to learn more.
Home » Best Office Retail & Project of the Year Finalist: Copper River - Phase 1
ProjectsNorthwestNorthwest Construction ProjectsBest Projects2021
Best Projects

The Copper River office project for Alaska Airlines is transforming a 7-acre site opposite the airline’s headquarters into a light and airy campus with an intricate, sustainable landscape.

Building the garage in phases gave the team extra time to reevaluate its plan and develop a better way to build the structure. Howard S. Wright contracted and sequenced the garage’s vertical shear walls with the horizontal formwork subcontractor instead of self-performing the work, thus saving time and money.

The project was also affected by Alaska Airlines’ inability to enter into an agreement with an adjacent property for a tieback easement. As a result, the team built an internally braced shoring wall with large steel rakers extending down into the footings and through the parking garage’s concrete post-tensioned decks. The system’s complexity and cost posed a challenge, but the team stayed on schedule.

In addition, the garage was close to Sound Transit’s light rail elevated tracks, which ran along the west property line. The safety requirements when working above the rails posed serious challenges as the potential for dropped objects, contact with high-voltage power lines and moving objects were all significant safety risks. The team devised a scaffolding plan and schedule and completed the project with zero incidents related to the light rail. 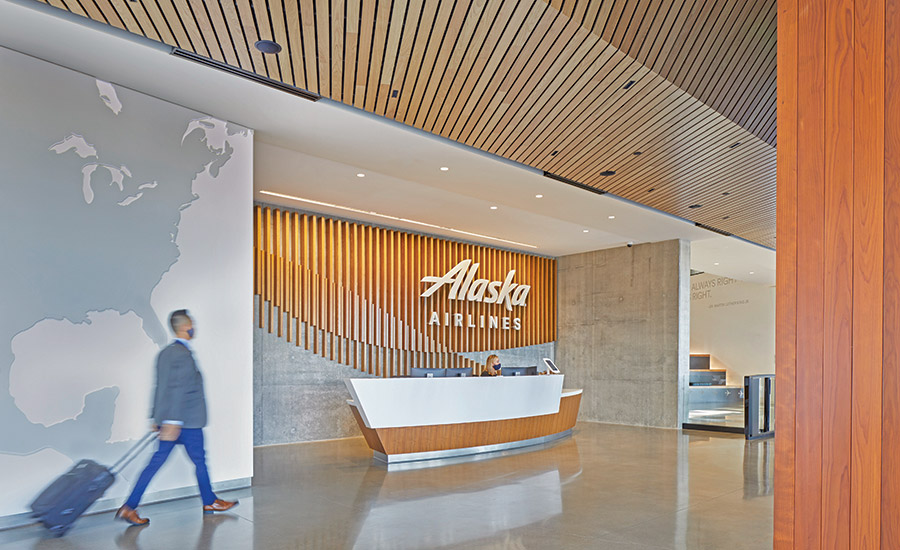 Throughout preconstruction, Howard S. Wright brought in key subcontractors to review the design documents. The early involvement of envelope subcontractors helped the team develop the waterproofing and constructibility details that sped up the process while maintaining the facade Alaska Airlines envisioned. The waterproofing system allowed the office building to be dried in nine months before substantial completion, which meant that interior finishes, MEP and other activities could begin earlier. Seen from the outside, the exterior’s ultra-transparent glass showcases the people working inside while the wood material nearer the ground creates an approachable and warm environment. 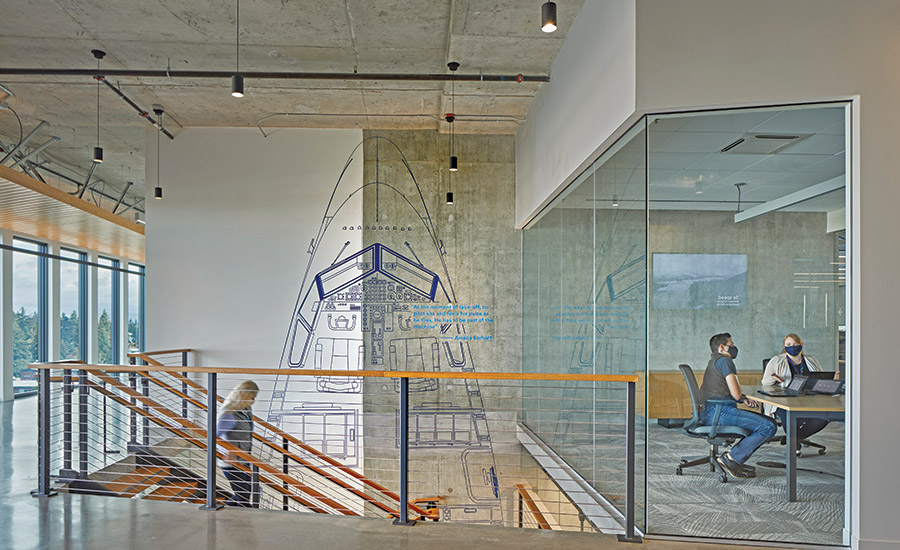 Sustainability was a crucial goal, both in design and construction. The structure manages stormwater runoff through bioretention planters, infiltration wells, a green roof and an underground water storage system. Collected rainwater is channeled into the bioretention “river” through weathering steel runnels that simulate the landscape of native trees and wetlands habitat, with birds and insects and a grove of birch trees at the heart of the site. By using open grating made of weathering steel to manage stormwater instead of galvanized or other coated metals, the design helps protect salmon habitat and offers moments of exposed water.

“The transformation of the property is simply stunning,” said Brad Tilden, former CEO of Alaska Airlines. “Our new building is not only a monument to our past but an efficient tool that will carry us forward.”