PROJECT OF THE YEAR FINALIST, BEST PROJECT and Award of Merit, Sustainability

Major high-rise projects in dense urban settings are often intentionally isolated from nearby buildings. Not so with One Vanderbilt, says the project team for the landmark $1.4-billion, 1.7-million-sq-ft skyscraper in east midtown Manhattan.

While its four interlocking and tapering rectangular glass-and-metal-panel volumes spiral to the sky, the 67-story building is intricately integrated with neighboring Grand Central Terminal via an active 14,000-sq-ft pedestrian plaza on Vanderbilt Avenue. A new 4,000-sq-ft underground public transit hall inside the tower provides enhanced connections to various transit services.

Even the tower’s street-level design complements its historic neighbor with a series of angled cuts that organize a visual procession to Grand Central, revealing the Vanderbilt Avenue corner of the terminal’s cornice—a view obstructed for nearly a century, according to the team. 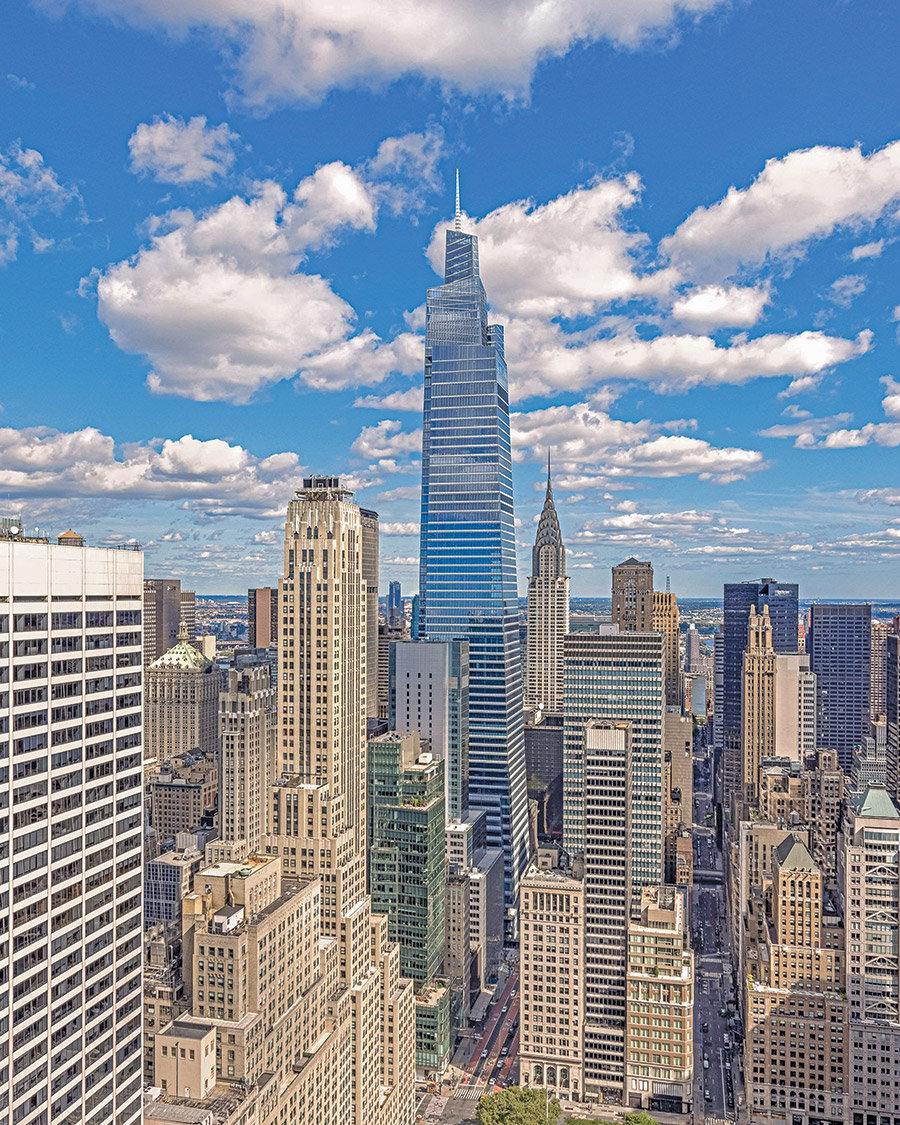 Establishing these linkages was just one of One Vanderbilt’s design and construction challenges, as the site’s proximity to Grand Central required preventing impacts to the area’s extensive subsurface network of train and subway structures. The below-grade congestion reduced space available for mechanical systems, so transformer vaults and other central infrastructure components had to be placed well above their usual locations. 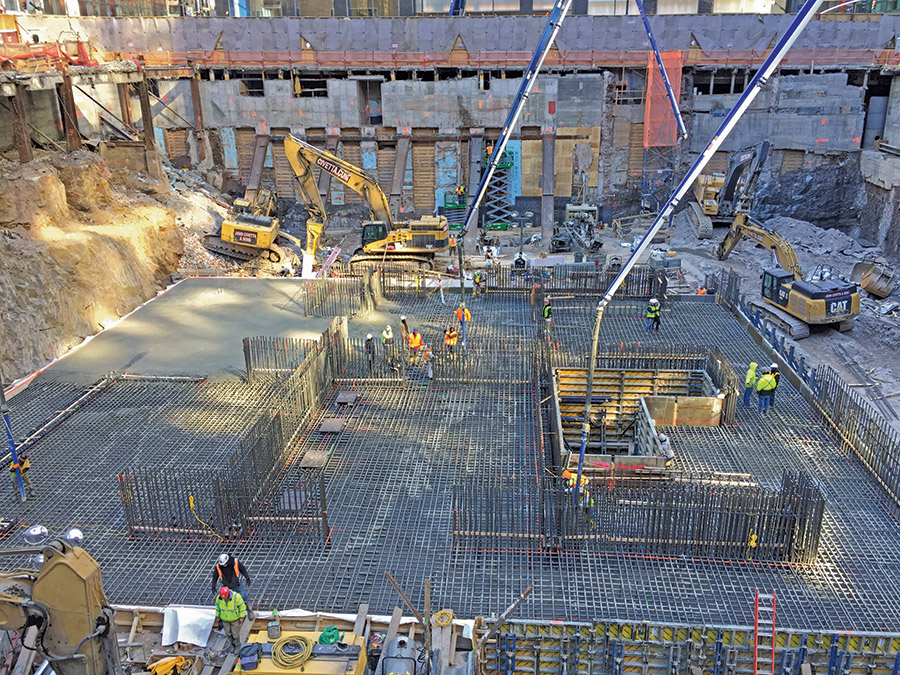 Once the four-year construction effort began in fall 2016, it did not take long for One Vanderbilt to start making a name for itself.Construction manager AECOM Tishman executed Manhattan’s longest-ever continuous concrete pour, a 4,200-yd effort that required 420 trucks over 16 hours. Using a steel-first erection sequence, the building’s columns, girders and core lateral bracing were designed to stand alone up to 12 stories. Concrete work then began its own upward rise, using a self-climbing form system within the core cells and hand-set forms from outside the core. 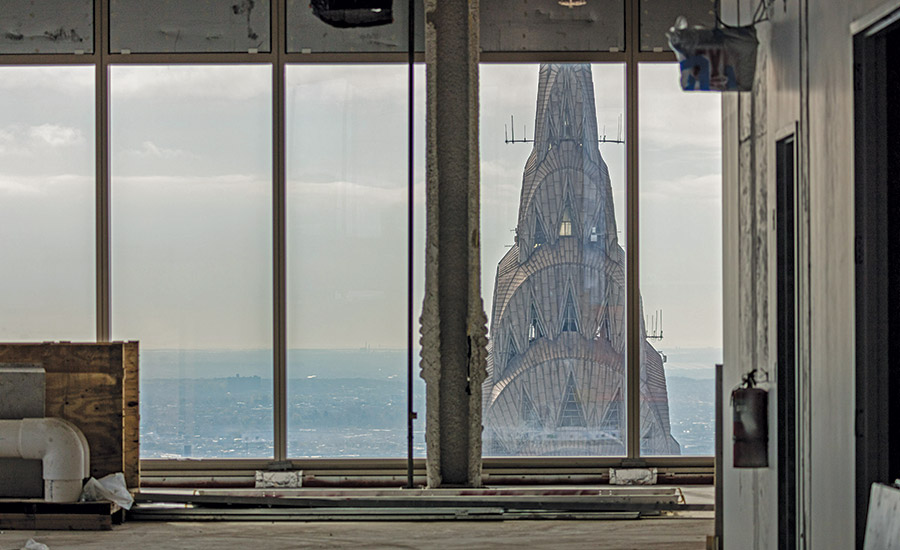 This approach allowed AECOM Tishman to absorb potential delays in concrete placement or steel delivery while maximizing the overall schedule, the team says. It also illustrated the extensive teamwide coordination, planning and communication needed from the earliest stages to execute a project of this size and complexity and seek to achieve the highest level of quality. Advanced construction management software was instrumental in fine-tuning design elements and material needs prior to bidding, resulting in fewer assumptions and more competitive bids, the team says. 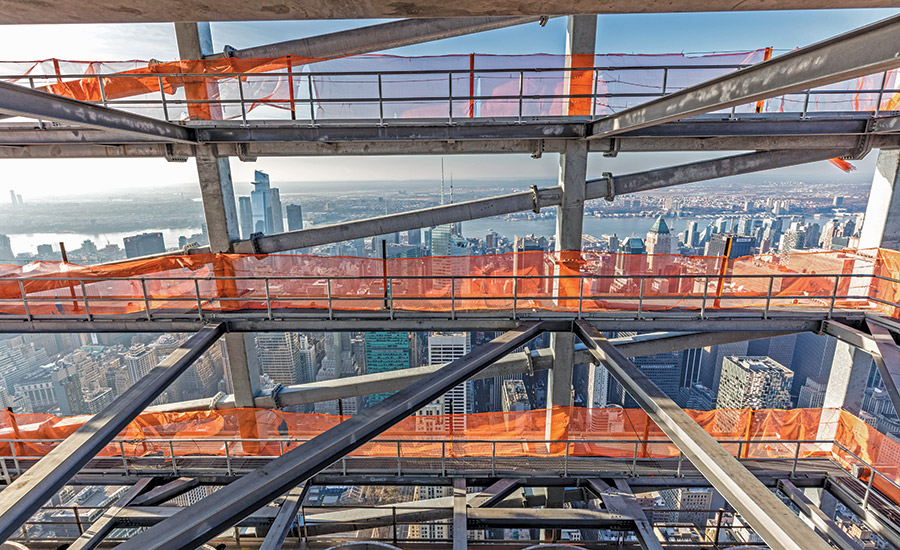 “As Summit One Vanderbilt is one part observatory experience and one part artistic masterpiece, it was imperative to coordinate the supporting mechanical, electrical,  plumbing, fire protection, fire alarm and low voltage systems with an eye for detail and placement,” says Christopher R. Horch, associate partner for lead MEP engineer Jaros, Baum & Bolles. “Working side by side with not only the design team but the installing contractors and operations team, the systems are blended into the overall theme of the project while still being able to be maintained and serviced.”

Comprehensive planning also underscored One Vanderbilt’s safety program, according to the team. At the project’s outset, a protective cocoon system that combined horizontal and full-level vertical netting on all exposed perimeters was augmented with a stringent tool and material tethering program. 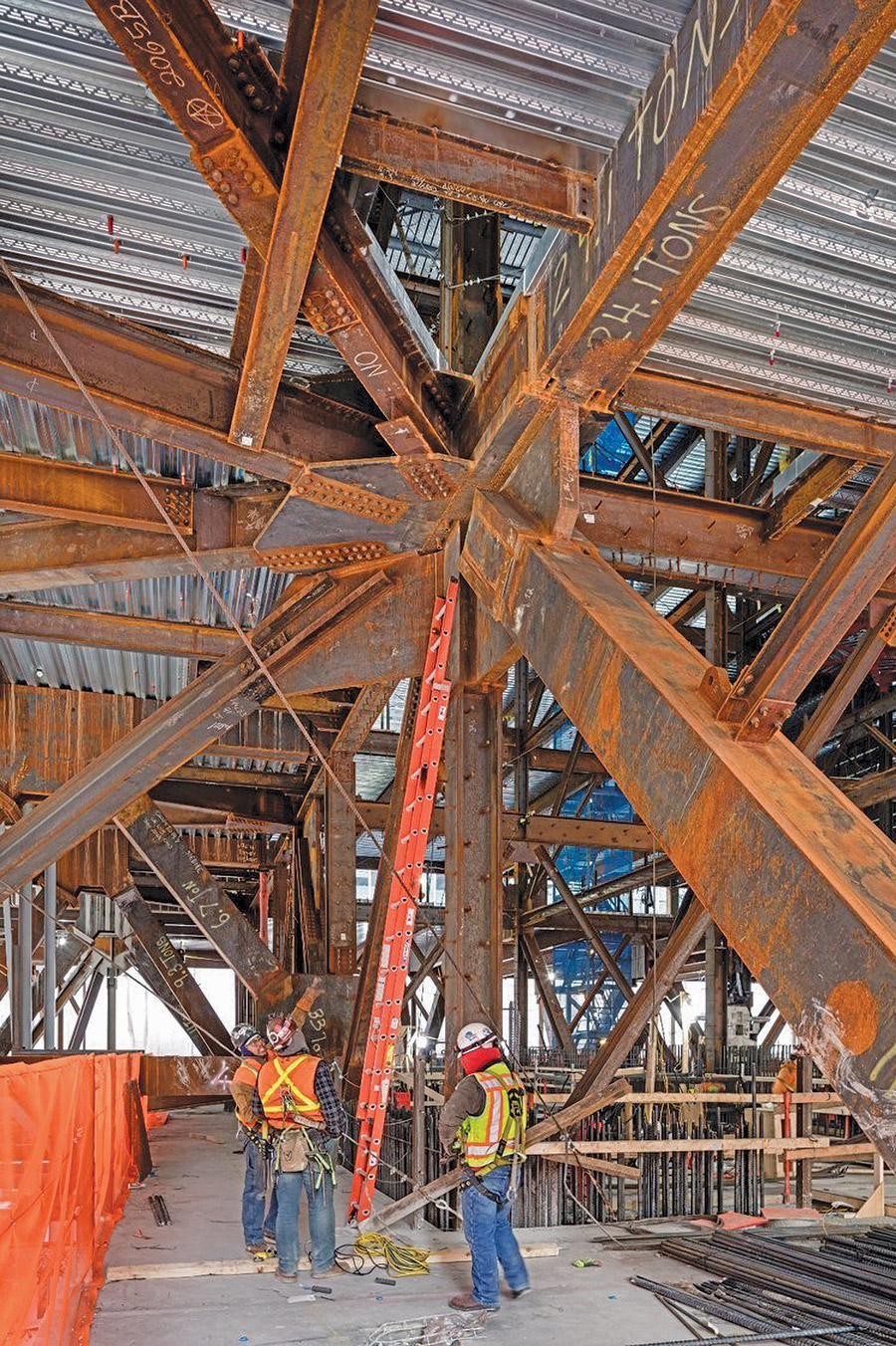 At the height of the project, routine third-party safety inspections were essential for the equipment and operation of three tower cranes and seven hoist cars. When an injury or near-miss situation occurred, joint investigations involving the safety team and contractors involved ensured the incident would be part of “lessons learned,” mitigating further unsafe procedures or conditions.

But not even the most prescient project planning could have foreseen the upheaval resulting from the coronavirus pandemic, including a city-imposed construction shutdown. One Vanderbilt’s project team retained its resilience, strategizing to swiftly and smoothly restart the project as soon as it able. As a result, the team was still able to deliver the finished project in September 2020, six weeks ahead of schedule.

Achieving both LEED v3 Platinum and LEED v4 Gold certifications, One Vanderbilt features floor-to-floor heights of up to 24 ft., a wide range of column-free floorplates and stunning 360-degree views through floor-to-ceiling windows and best-in-class infrastructure.

The building’s long list of amenities includes a 30,000-sq-ft tenant-only amenity floor with large-format meeting spaces, a club-style lounge and outdoor terrace as well as an 11,000-sq-ft restaurant by world-renowned chef Daniel Boulud.