This website requires certain cookies to work and uses other cookies to help you have the best experience. By visiting this website, certain cookies have already been set, which you may delete and block. By closing this message or continuing to use our site, you agree to the use of cookies. Visit our updated privacy and cookie policy to learn more.
Home » Northwest Project of the Year: Mukilteo Ferry Terminal
ProjectsNorthwestNorthwest Construction ProjectsBest Projects2021
Best Projects

The first new terminal in 40 years for the Washington State Dept. of Transportation-operated Washington State Ferries, the country’s largest ferry system, came with tricky site conditions and cultural significance that impacted both design and construction for a $187-million project split into multiple contracts to ensure on-time delivery.

To relieve congestion and seismic concerns at the 63-year-old terminal hemmed in by other development, the new Mukilteo Ferry Terminal—part of State Route 525, the state’s second-busiest ferry route with 4 million annual riders and an expected walk-on ridership increase of 124% by 2040—was built one-third of a mile east of the existing structure on what was an abandoned World War II-era U.S. Air Force fueling station—raising environmental contamination concerns.

Meanwhile, the site is steeped in cultural significance as the signing location of the 1855 Point Elliot Treaty with dozens of Native American Tribes and Nations.

The combination of culturally sensitive land with potentially contaminated areas meant the terminal site was raised 7 ft. “We needed to be very sensitive to that cultural significance and that really drove so many decisions for the project,” says Dan Alire, project engineer for KPFF Consulting Engineers. 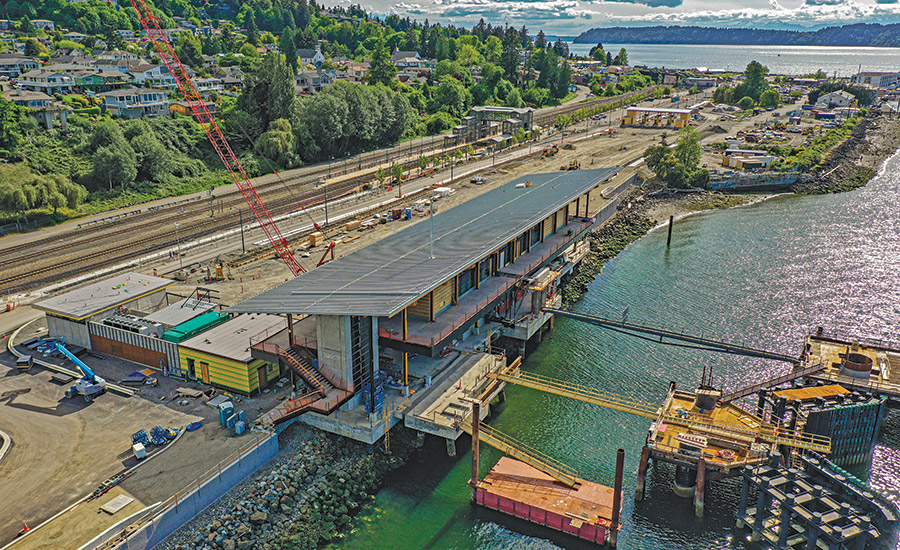 With nearly 50 subcontractors and up to 80 personnel on site at one time, field leadership led weekly partnering meetings to give the entire team an understanding of the big picture and upcoming work.
Photo by Benjamin Benschneider Photography, courtesy of IMCO General Construction

The new terminal building—designed in the form of a 30-ft by 100-ft Coast Salish longhouse with a large gathering hall and with views of the water and sustainable features in conjunction with Coast Salish Tribes—targets LEED Gold and includes photovoltaics, rainwater harvesting and natural building ventilation. Brett Himes, IMCO senior project manager, says the team worked within the sustainable goals to source specific species of lumber locally and with proper certifications. “We had a heck of a time getting the right stuff for the crosslaminated timber panels,” he says.

Himes says the glulam timber framing and cross-laminated timber panel roofing system was a project IMCO self-performed. “That was a really challenging scope because of the solar system that was integrated into the lid,” he says. “There was a bunch of routed channels for the wiring.” By timing it in the fall, they had the risk of weather impacting the work, so they moved quickly. “That was a good feat to get that roof on as fast as we did,” Himes adds. “It just looks awesome, the wood and glulam. The cedar siding on all the structures really finished off the buildings.”

IMCO, which took over after a previous contractor built foundations, discovered the foundations were out of skew, requiring changes to the steel order, wall thicknesses and elevator shafts. IMCO’s laser scanning ensured accuracy. 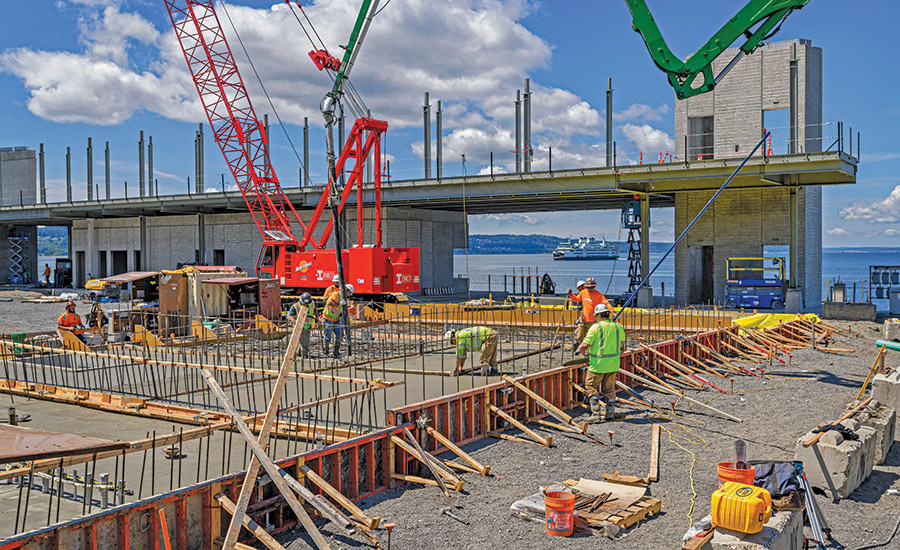 IMCO’s crew placed a concrete foundation for the maintenance building.
Photo by Will Austin Photography, courtesy of IMCO General Construction

Respecting the heritage and culture of the tribes required innovative thinking, as the team could perform virtually no onsite excavating. The team, including IMCO General Construction leading the $51-million on-land portion of the construction project, had to find a happy medium to raise the site as much as possible to allow burying all utilities without excavating while protecting against coastal flooding and not overextending the budget with expensive fill. A tidal range up to 18 ft made design tricker, as the overhead passenger loading bridge had to work at both low and high tide, all with proper ADA slope. It was all a balancing act.

So was dealing with multiple contractors on site with on land and marine work happening concurrently. “Nobody really knew how that was going to go,” says Himes. “We were all playing in the same sandbox, and the coordination went very well. We had a good partnership [with contractors and owners] and were able to facilitate each other’s work and get it done safely.”

The site’s history provided ample direction in construction. Along with the heritage of the treaty informing a strong backdrop to the design of the buildings and limiting areas contractors could disturb, the history of contamination from the time the site was a former fuel tank farm and an ammunitions facility before that set the tone. IMCO set up a process that worked with the state to classify all soils and dispose of contamination off site in a timely manner. “We were pretty well prepared for that, we had our people trained to handle that and when we encountered something we dealt with it quickly,” Himes says. “We could have had delays, but we worked through that pretty well.” 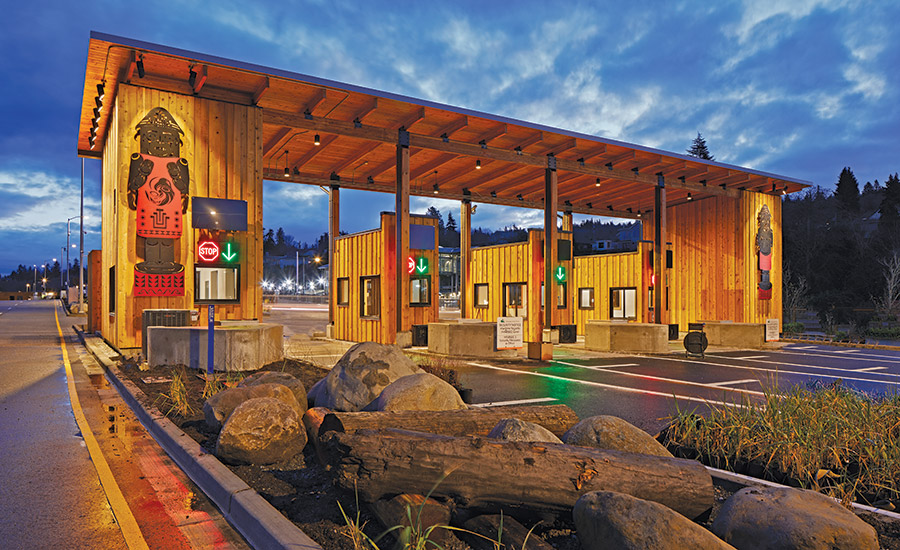 Bryant Bullamore, WSF construction manager, says test borings set the boundaries of the culturally sensitive and environmentally delicate areas and an archaeologist on site ensured they followed all tribal agreements.

But even with all the careful planning, the site’s history kept tossing old pipes, old fuel lines and debris in places they weren’t expecting. The coordination and planning kept the project on track, Himes says.

The planning also kept IMCO ahead of any concerns that could delay the project down the road. After hearing about utility delays with another Washington State Ferries project in Seattle, IMCO created a task force to bring together stakeholders 18 months out from the finish to ensure commissioning wouldn’t get delayed.

“Since this was a brand-new terminal, none of the agreements were in place for fiber, for internet, phone, power, multiple items were not there that had to be dealt with during construction,” Himes says. “We worked really close with DOT—even though it wasn’t really our responsibility—to come up with a planning tool because we were concerned we wouldn’t have the utilities we needed.”

That process helped kept the project on time, and IMCO led the effort to coordinate with the owner to make decisions that moved the timeline along. “I think things would have fallen through the cracks if we didn’t have that planning tool,” he says. “It was good transparency between the team and good we were looking ahead and not dealing with it all at the end.”

The project, which started in 2017 and opened in spring 2021, includes the terminal, a maintenance building, passenger overhead loading, toll plaza with four toll booths and seven holding lanes, an in-water docking and loading structure, a transit center for connections to buses and trains and improvements to intersections and the waterfront promenade.

Because of the concerns about work stoppages involved with the site’s sensitivity, the project was broken into four different contracts to ensure it moved forward. While this added complications in coordination, the contractors worked well together and kept the project moving forward to an on-time opening of the building. It also opened the project to contractors with unique specialties. 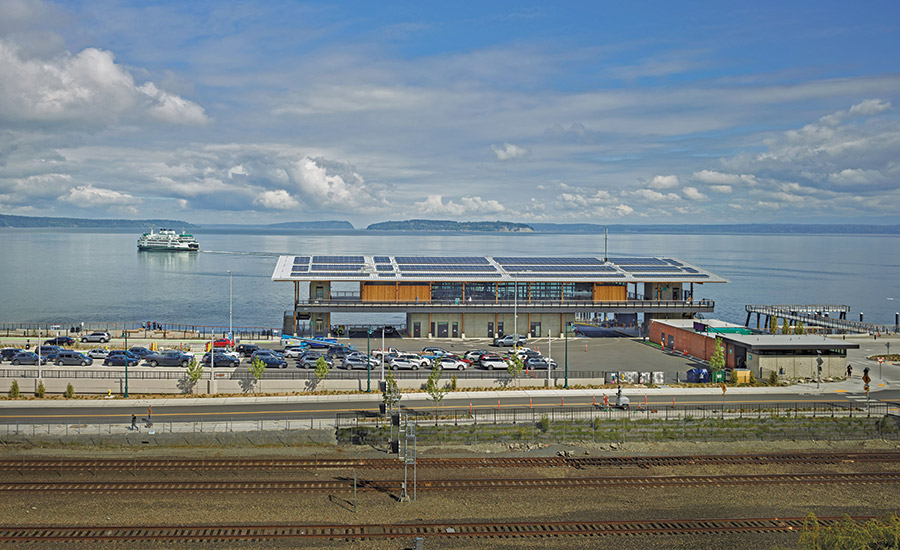 The team says the project’s sustainable design is a benefit to the surrounding community because of the improvements made to safety, access and waterfront enhancements.
Photo by Benjamin Benschneider Photography, courtesy of IMCO General Construction

Orion Marine Group built the foundation trestle, a high-risk portion, while IMCO handled the deep stormwater system with a trenchless technique to not disturb the site. Manson Construction executed the remainder of the marine work, and IMCO, in a separate contract, constructed the building, roadwork and utilities.
“The different contracts and phasing were an important part of how this kept moving forward and how we mitigated some of the major risks we knew existed,” Alire says.

The coordination didn’t stop with contractors, as multiple state agencies, the city of Mukilteo and 11 federally recognized tribes were all part of the project. “There are so many people, there are so many unique parts,” Alire says.

The site required an innovative stormwater system consisting of bioretention facilities, modular wetlands and a large pervious pavement sand filtration system, all working together to treat water. IMCO called the project akin to a huge filter draining, cleaning and discharging runoff. The 250-vehicle holding area features filter fabric, sand and crushed rock. IMCO proposed a plan to pulverize existing concrete and reuse it as fill instead of full demolition and removal from the site, helping both the timeline and budget and reducing the risk of uncovering or impacting potential sensitive archaeological areas below.

Himes says with about a football field-size area of pervious concrete collecting all the stormwater “like a bathtub,” with no manholes, catch basins or piping, simply an infiltration system that filters and cleans water before releasing it back to the Puget Sound, the “system turned out pretty good.”

The coordination with the tribes extended beyond the historic nature of the site. Architects LMN worked in tribal heritage throughout the terminal’s design, and IMCO came into the mix to help add tribal art to two large glass elevator shafts on the water side, one of the first things passengers see as they approach the building.

Himes says it was up to IMCO to figure out how to get the Tulalip Tribe artist’s work onto the glass, settling on a digital print between two panes of glass. “It is pretty cool, it is big,” he says. “It was very important to listen to the artist and accommodate as best you could and not just butt in and say this is what is happening but bring him onto the team. It was a lot more than our glass contractor anticipated, but we had to say that  ‘We are going to work as a team and make sure we get this right.’”

Having strong buy-in and teamwork on a project isn’t always unusual, but Himes says that the willingness to work through issues on a hard bid job as this one, dealing with the bounty of issues and challenges in a timely manner, was valuable. “We were the low bidder on a public job, and those can be difficult from a relationship perspective because there is a lot of financial burden,” Himes says. “I think it couldn’t have gone any better from the team that was involved. We didn’t want the job to end.”