This website requires certain cookies to work and uses other cookies to help you have the best experience. By visiting this website, certain cookies have already been set, which you may delete and block. By closing this message or continuing to use our site, you agree to the use of cookies. Visit our updated privacy and cookie policy to learn more.
Home » Historic Old Cook County Hospital Renovation Relies on Exploratory Surgery
ProjectsMidwestMidwest Construction NewsMidwest Construction ProjectsBest Projects2021
Best Projects

After sitting vacant for more than 20 years and surviving an attempt to demolish it, Old Cook County Hospital has been restored as two hotels

When Cook County Hospital began construction in Chicago in 1914, the poor badly needed access to health care, overall public health was subpar and a global pandemic would soon grip the community.

In 2016, things were eerily similar when the largest county in Illinois by population finally approved a $140-million design-build plan to redevelop the aging former hospital building into two hotels—a Hyatt Place and a Hyatt House—as well as medical offices, a hospital museum, a food hall and a day-care facility.

The historic structure was the site of the world’s first blood bank, the nation’s first hospital ward exclusively for AIDS patients in 1987 and where generations of doctors and nurses had been taught how to practice medicine. It was even the setting of the long-running television drama “ER.” By 2002, both the TV show cast and the real-life staff had moved to the new John H. Stroger Cook County Hospital. Old Cook County Hospital sat vacant for nearly 20 years by 2016.

“By the time we took over, [the structure] was fully depreciated,” says John T. Murphy, chairman and CEO of Murphy Development Group, the developer that would lead a design-build team that finally convinced the county to save the building. “There were trees growing outside the facade, the homeless had populated the building. It was in very, very rough shape. But we figured out the right plan and the right economy that allowed us to move it forward.”

Murphy was joined by contractor Walsh Construction and architect Skidmore, Owings and Merrill in the design-build group. MB Real Estate, Plenary Group and Granite Cos. were also involved in what became known as Civic Health Development Group (CHDG), the winning responder to a Cook County RFP in 2015 that asked for proposals to save Old Cook County Hospital. Previous attempts at redevelopment fizzled. After the building was added to the National Register of Historic Places in 2006—an effort spearheaded by statewide preservation group Landmarks Illinois—redevelopment efforts became eligible for federal historic tax credits. Cook County stepped up, under the leadership of Cook County Board of Commissioners President Toni Preckwinkle, by offering other land in the Illinois Medical District for development once the hospital job was completed. The renovation and reconstruction is just one part of a planned $1-billion Harrison Square Development on Chicago’s west side. 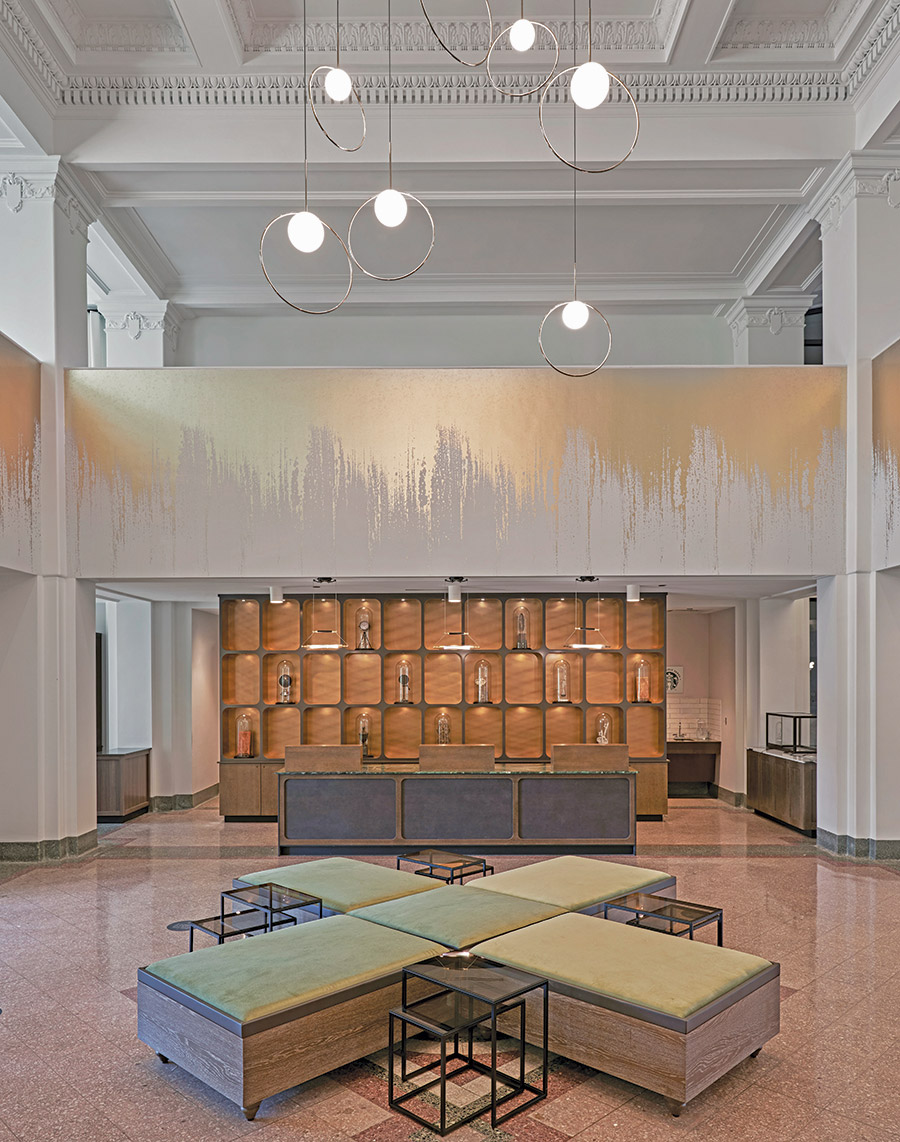 The vaulted ceilings and clay-tile-encased steel columns of Old Cook County Hospital, the fireproofing of 1916, were able to be transformed into lobbies and event spaces in the two Hyatt hotels.
Photo courtesy of Dave Burk/SOM

SOM lead designer Brian Lee and his team created a plan that brought the space down to a manageable 345,000 sq ft. Two north-facing wings that were additions from an earlier renovation were demolished by the county in 2007. From there, the “good bones” and plentiful windows would allow hotel and medical office rooms to be carved out of the space.

“Our team worked very hard to come up with a plan where you weren’t forcing a hotel module on the design,” Lee says. “It actually worked out where the rooms could be properly sized. They were a little quirky in some places, there are lots of different variations, but we found a very nice fit between the hotel programs and the exterior.” 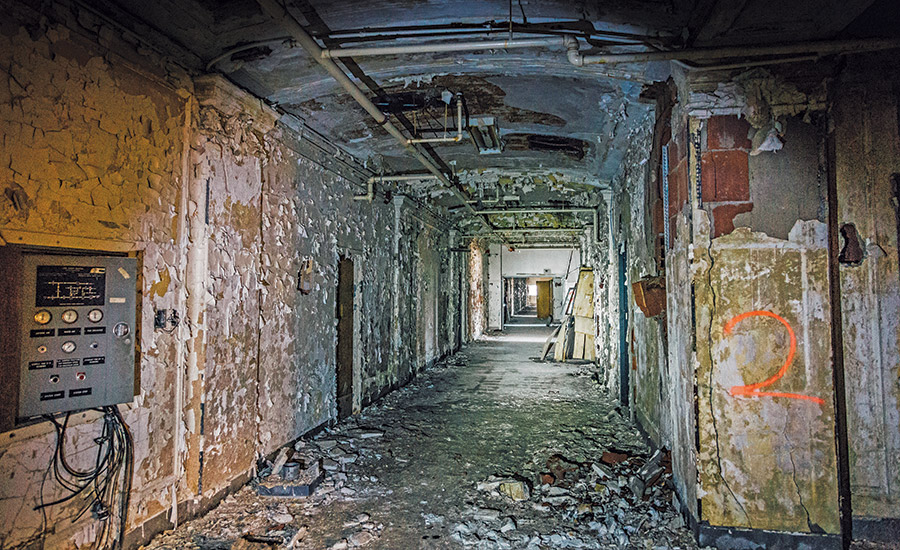 Conditions at Old Cook County Hospital, which had sat empty for 20 years prior to 2016, were significantly deteriorated when the designbuild team got started.
Photo courtesy of Dave Burk/SOM

When Walsh Construction got there, unknown conditions were the biggest obstacle. There were no drawings and very few photos were available of the building’s construction from 1914 to 1916. Walsh had to rely on microfiche for what few as-built records it had.

Steel columns were wrapped in clay tile, the 1914 version of fireproofing. While most floors had east-west steel framing, some inexplicably had north-south steel. Some framing was twisted to make room for spiral staircases that led to apartments for resident physicians. Remediation of outdated materials such as lead paint was necessary throughout the process. Work on the facade restoration of the masonry building alone cost $18 million. 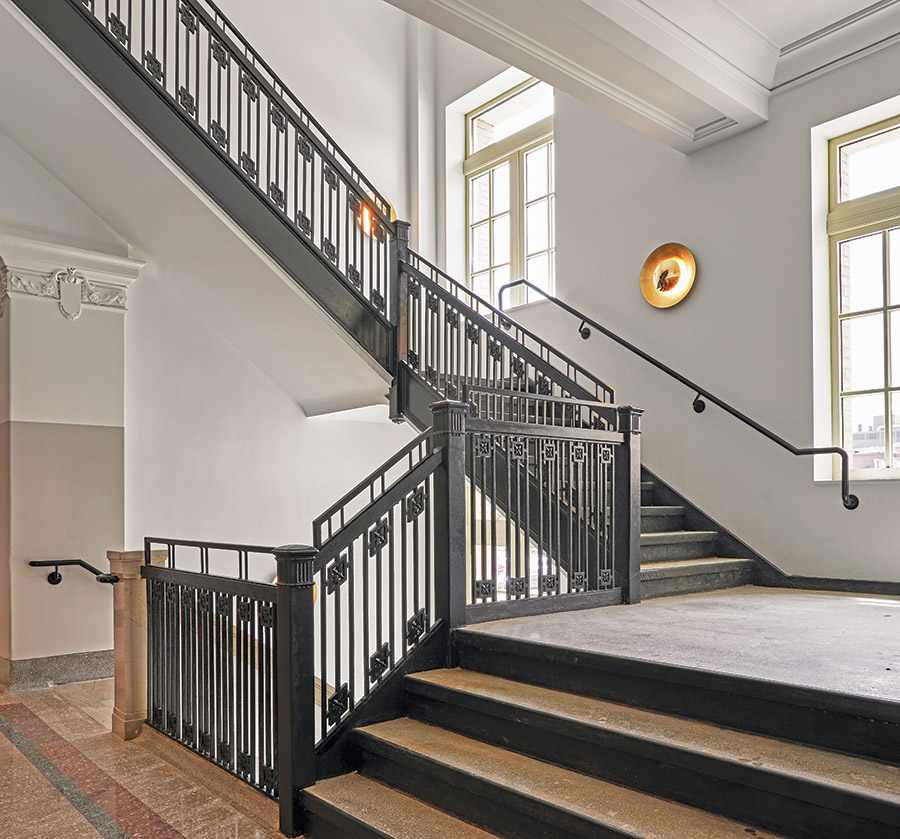 Removing sheet metal from older renovations unveiled a daylit staircase that became the centerpiece of one of the hotels’ lobbies.
Photo courtesy of Dave Burk/SOM

“Even through all the curveballs thrown at us, our team was able to quickly react and come up with several different types of solutions and really vet out multiple scenarios so that we could move forward in the most efficient manner,” says Ken Johnston, senior project manager for Walsh.

“Even through all the curveballs thrown at us, our team was able to quickly react and come up with several different types of solutions.”
—Ken Johnston, Senior Project Manager, Walsh Group

Some of the exploratory surgery that Walsh and historic preservation specialist Wiss, Janney, Elstner, the project’s structural engineer, performed led to discoveries that enhanced the project. The skylights uncovered at the top of the building were transformed into windows in the hotels. The building’s stairwells pointed inward to create a two-story atrium around the building’s central stairwell. That stairway would become the main feature of one the hotel’s lobbies. The atrium had been covered by corrugated metal and other makeshift wall elements in previous renovations.

“We kept digging at it and, finally, we saw the beautiful molding around the perimeter, and we basically replicated that condition to what it was back in 1916,” Johnston says.

By the time the two Hyatt hotels were ready to open in September 2020, Chicago had been gripped by the COVID-19 pandemic and tourism was sparse, but as the city and county have been gradually reopening in 2021, the hotels have attracted tourists as well as Chicagoans. The food hall has experienced the largest crowds. It was named Dr. Murphy’s Food Hall after one of America’s preeminent pioneering surgeons from the turn of the century. Dr. John B. Murphy studied, interned and taught at Cook County Hospital and counted among his patients President Teddy Roosevelt. His direct descendant, John T. Murphy, led the redevelopment and—with the rest of the design-build team, preservationists and local leaders—saved Old Cook County Hospital.

Is It Time to Start Building a Space Superhighway?