This website requires certain cookies to work and uses other cookies to help you have the best experience. By visiting this website, certain cookies have already been set, which you may delete and block. By closing this message or continuing to use our site, you agree to the use of cookies. Visit our updated privacy and cookie policy to learn more.
Home » Best Small Project: Locus Biosciences - Commercial Phage Production Facility Upfit
ProjectsSoutheastSoutheast Construction ProjectsBest Projects2021
Best Projects

BE&K Building Group led an interior upfit that transformed a 30-year-old, one-story shell space into a cutting-edge BSL-2 laboratory and biomanufacturing suite. The project provided the build-out of 12,000 sq ft of additional space adjacent to Locus Biosciences’ existing suite—doubling the total size of its facilities.

Extensive mechanical and electrical modifications were installed including a sophisticated rooftop platform and ground-level equipment yard. 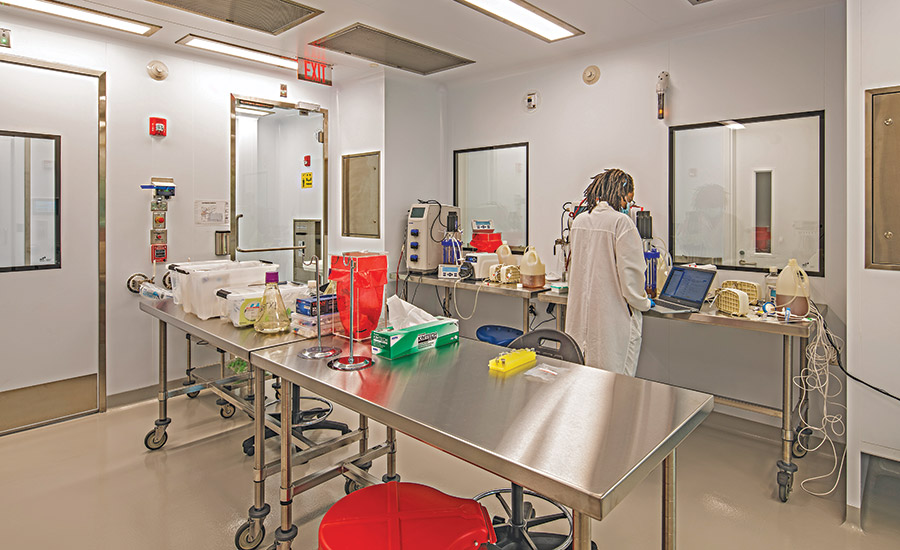 No as-built documents existed, so the team laser scanned the existing space and utilized ground-penetrating radar to identify current conditions. Comparing the design and laser scans, it was discovered that the ductwork design could not be installed due to previously unknown existing ceiling kickers shown in the scan. Through model coordination and collaboration with the designers, the ductwork was repositioned to fit within the space.

Under tight budgetary constraints, all major team players were brought to the table early to produce more proactive decisions. BE&K was engaged shortly after Jacobs completed conceptual design. Key subcontracting firms that specialized in similar facility construction were also engaged early. The strategy allowed for Locus, Jacobs, BE&K and its key subcontractors to partner during design to minimize potential risks and issues during actual construction. More than a dozen early design coordination meetings were held, with 3D modeling used extensively.

The project, which was completed within budget and on schedule in August 2020, was built with maximum flexibility in mind to allow for future process changes and expansions.