This website requires certain cookies to work and uses other cookies to help you have the best experience. By visiting this website, certain cookies have already been set, which you may delete and block. By closing this message or continuing to use our site, you agree to the use of cookies. Visit our updated privacy and cookie policy to learn more.
Home » Best Healthcare: COVID-19 Alternate Care Facility Rises in 22 Days
ProjectsSoutheastSoutheast Construction ProjectsBest Projects2021
Best Projects

Covid-19 Alternate Care Facility (ACF) on a National Guard Base

Faced with the risk of a COVID-19 outbreak on St. Croix—an island with limited health care infrastructure—the U.S. Army Corps of Engineers oversaw a federal effort to rapidly deliver an alternate care facility to ensure that severely ill and infectious patients would have access to appropriate treatments.

Given the immediate need, the Corps called on Conti Federal Services to design and convert an existing National Guard barracks into a 48-bed acute-care facility—in just 22 days.

Patrick Hogan, project executive at Conti, says the mission-critical nature of the project helped drive the team and push its suppliers to deliver. “Col. Hibner [commander of the USACE Savannah District] came down and gave a rousing speech about the mission,” he recalls. “We left there pretty pumped up to do the impossible in 22 days.”

To say that the project team for the new COVID-19 Alternate Care Facility on St. Croix went the extra mile would be an understatement. To expedite delivery of the project in the U.S. Virgin Islands, regular flights—often on small aircraft—were required to bring in workers and materials from the U.S. mainland, Puerto Rico and other neighboring islands.

During the project, materials had to be sourced through the Buy American Act and transported from the U.S. mainland  in spite of travel restrictions. Hogan notes that the team tried to use “off-the-shelf” materials whenever possible due to supply shortages. In some cases, specific equipment came from factories that had been closed due to COVID lockdowns. Hogan says Conti called on its trusted vendors to deliver, even if it meant reopening their shops. 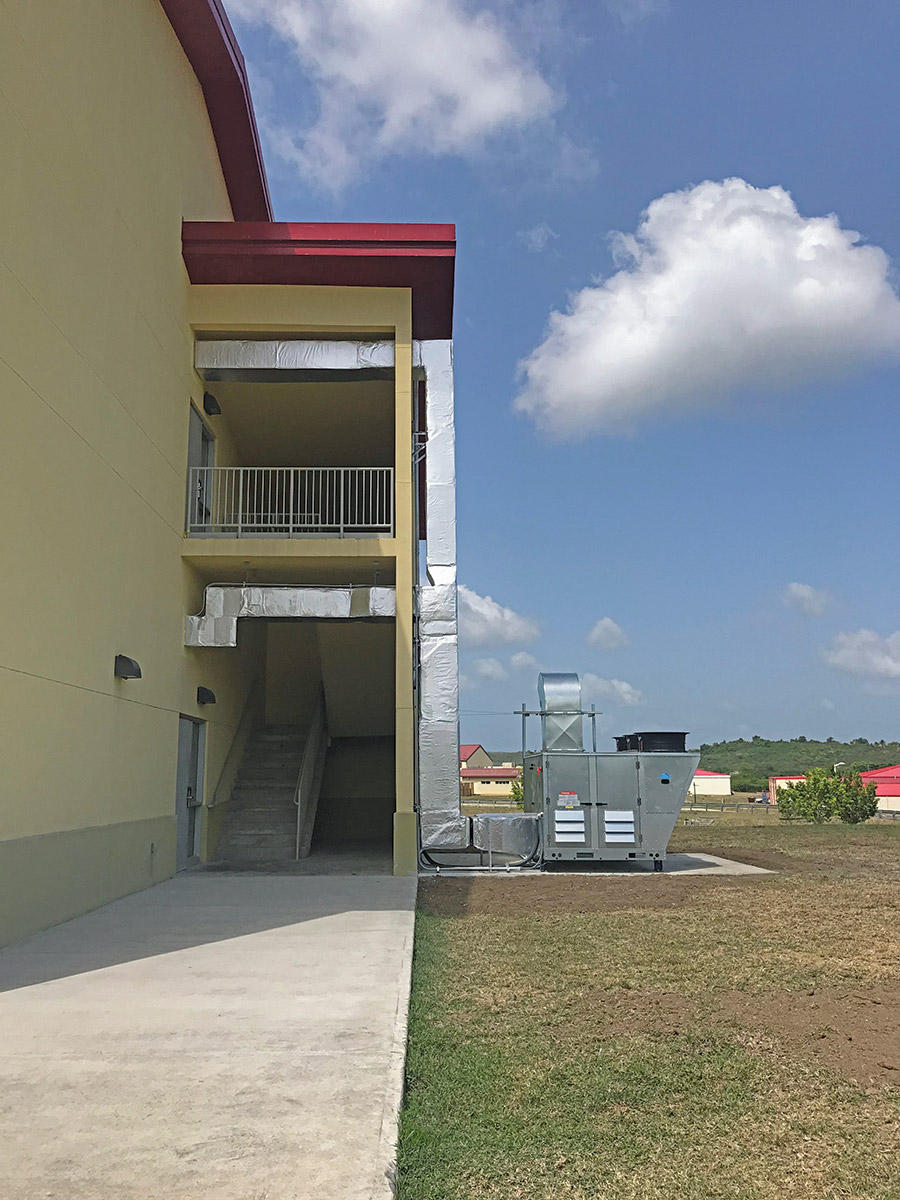 Skids for the water pumps needed to be manufactured for the job, so Hogan says he called on a supplier who bought workers back into the shop to build the skids. “The guy had his people build it in one day,” Hogan says. “He drove it himself down to Trenton [N.J.] airport and they put it on a C-130 [airplane].”

Contracted under a design-build delivery method, designers worked sometimes around the clock to address project needs. The most technically complex element was the HVAC system, which required constant negative air pressure to isolate infectious patients from other patients and staff. With only 30 hours remaining until the official ribbon-cutting, testing of the negative air pressure showed a need to add additional HVAC duct to several rooms. “It just so happened that a warehouse in St. Thomas had 12 of them, so we sent a Cessna over to pick it up,” Hogan says. 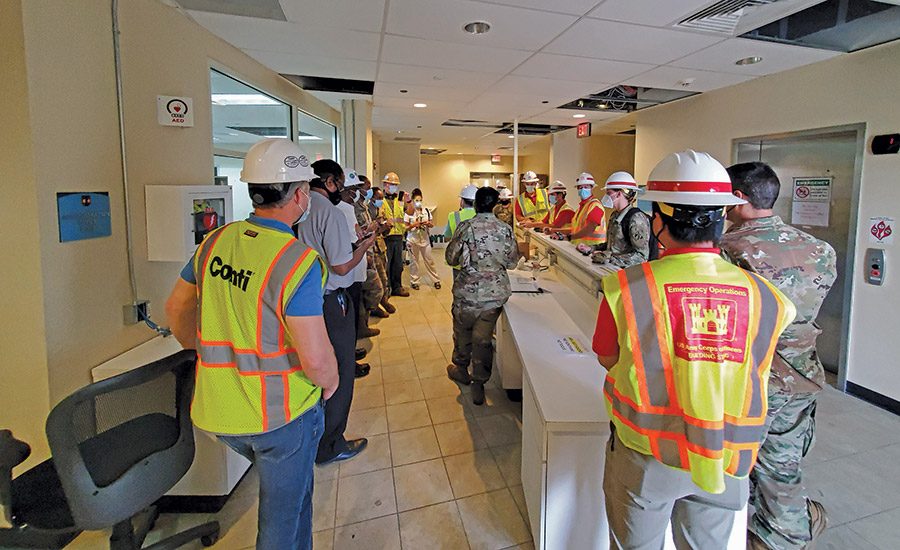 The team attempted to reuse existing equipment where possible. The backup power generator was not working when the job started; however, the team was able to find the necessary spare parts in Puerto Rico and have them flown to the site. The existing fire suppression system also did not work and needed to be completely replaced. Several of the upgrades also had to be designed to endure Category 5 hurricane winds and seismic activity.

The workforce on the island was limited, with only 10% of the workers coming from St. Croix and another 10% from Puerto Rico. The remaining 80% were flown in from the U.S. mainland. Housing was also limited, so Conti reached out to resorts on the island to take in its workers. Restaurants were also shuttered, so the team contacted local chefs to prepare catered meals to bring to workers.

Because Conti Federal was flying personnel in and out of St. Croix at a time when infrastructure, such as Customs and Border Protection, were being restricted, Conti Federal engaged with the U.S. Virgin Islands Dept. of Health to develop a COVID-19 assessment program. The team followed the department’s COVID-19 protocols and invited the department to monitor the team on site. 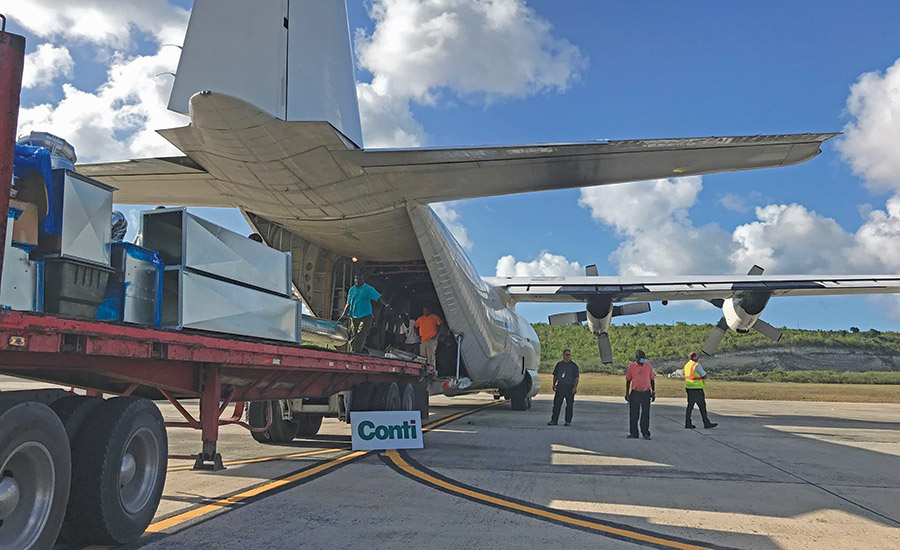 The contractor then implemented a detailed COVID-19 preparedness and response plan that established safe working guidelines for all team members. Worker protections included engineering controls, administrative controls, safe work practices, awareness training and personal protective equipment.
Additionally, each crew used its own set of tools—which were regularly disinfected—with no sharing between crews. Materials were kitted in quantities required for each room to minimize material handling and crew movement.

Although crews often had to work long shifts, safety protocols were strictly enforced and there were no lost-time accidents or OSHA recordable incidents.
There were also no outbreaks of COVID-19 among workers or staff on site. Despite the challenges, the $6.4-million project met the mission, finishing on time on May 8, 2020.

MetroSouth Hospital Was Revived as a COVID-19 Alternate Care Facility