This website requires certain cookies to work and uses other cookies to help you have the best experience. By visiting this website, certain cookies have already been set, which you may delete and block. By closing this message or continuing to use our site, you agree to the use of cookies. Visit our updated privacy and cookie policy to learn more.
Home » Army Corps Tackles Long Island Coastal Risk Projects at Key Milestone
New YorkNew York Construction ProjectsSustainabilityWater & DamsEnvironmentGovernment
Coastal Resilience

In the wake of the storm, Congress approved $60 billion in emergency relief to fund a slate of work in 24 states to protect against future storms.

On Long Island, with its south-facing shoreline especially vulnerable to coastal hazards, the U.S. Army Corps of Engineers' New York District is tackling the issues of storm surge and sea level rise with a comprehensive, coordinated plan that had been in the works for years. The district has already completed several projects, and more are planned.

While many areas targeted for post-Sandy work already been locations of beach renourishment, the new Corps projects are larger and include constructing more rock groins and stronger sand dunes, placement of millions of cu yd of sand, and added efforts to floodproof homes and businesses.

With full federal funding, the projects have moved along without the need for a local cost share.

At Rockaway Beach, Queens, located on a four-block-wide peninsula in the New York City borough between the Atlantic Ocean and Jamaica Bay, the first phase of a three-phase project is under way. Unlike previous studies of the area, the latest Corps report examined both the coast side and vulnerable communities surrounding Jamaica Bay, with officials finding that the areas act as one system.

H&L Contracting LLC was awarded a $113.9-million contract in June 2020 to build 14 stone groins and rehabilitate five others to support a wider beach. The Corps also pumped 348,000 cu yd of sand onto the beach in 2019 to mitigate erosion.

A contract for the second phase of the project is expected to be awarded the week of Oct. 25. The work will include construction of reinforced dunes and timber beach access structures on the ocean side.

The Corps is also planning a third phase of work, involving more sand placement on the beach side as well as risk reduction measures on the Jamaica Bay side of the peninsula, which are still being designed.

Efforts to mitigate storm damage on the Rockaway peninsula date back to Hurricane Donna in the 1960s, a storm that damaged thousands of Rockaways' homes and businesses, and was followed by another severe storm just two years later. The Corps constructed its first coastal protection project in the area in 1977, with beach renourishment work following through 2004. While there were efforts to revisit the plan in the early 2000s, it wasn’t until after Sandy that the Corps wrote a new plan detailing the work now under way. 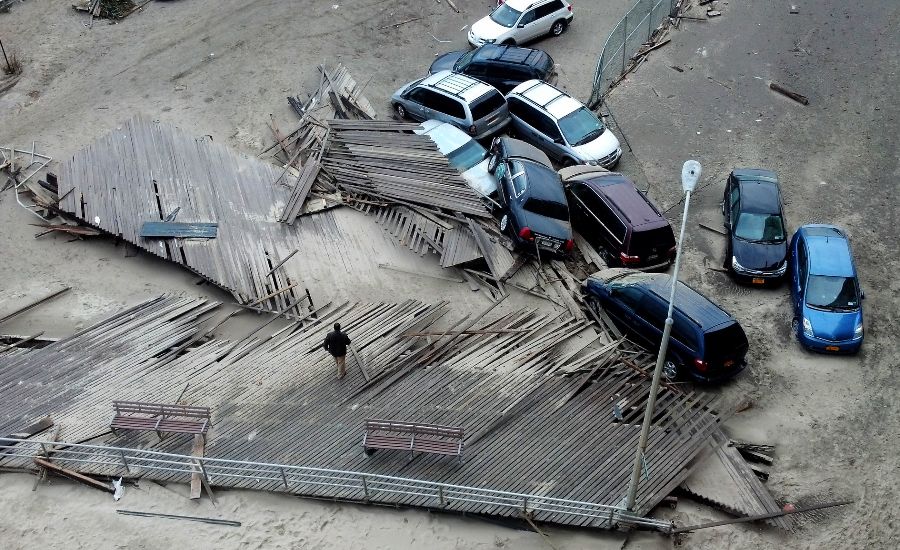 The seemingly slow pace of work has drawn criticism from some New Yorkers. After remnants of Hurricane Ida hit New York City, Queens Borough President Donovan Richards said during a CNN interview that the Corps “has continued to drag their foot on projects like the Rockaway reformulation plan.” Corps officials say Congress’ decision to fully fund projects has allowed it to move along much faster than it would have otherwise.

“We completed all of the repairs after Sandy,” says Joseph Seebode, Corps deputy district engineer and chief of programs and project management in New York. “We completed all operations and maintenance activities projects that were impacted by Sandy, and now we’re building projects that were either authorized but had not started construction, or had never been fully authorized.”

In addition to the post-Sandy emergency funding, Congress approved another $638 million for the Rockaways projects and $401 million for beach renourishment in the 2020 Water Resources Development Act.

The WRDA bill also included about $1.6 billion for the Fire Island Inlet to Montauk Point reformulation project further east on Long Island, as well as $1.5 billion for renourishment. Like the Rockaways work, that project also has a long history. Navigation and erosion control projects for the area date to the River and Harbor Act of 1960. But it was after Sandy hit that officials saw a need for new protections against floods and storms, says Mark Lulka, Corps project manager for that project and for the nearby Fire Island Inlet to Moriches Inlet stabilization project.

“It’s been a lot of hard work by a lot of people over a number of years to get this going,” Lulka says. “Now we’re off and running, and we are funded. So we anticipate smooth execution of all these contracts going forward in the next few years.”

In August, the Corps awarded a $47.5-million contract to Great Lakes Dredge and Dock Co. for the first phase of the Fire Island-Montauk work. It is expected to get underway in mid- to late November, Lulka says. The work will include hydraulically dredging more than 1.5 million cu yd of sand from the Fire Island Inlet and placing it strategically at Gilgo Beach and Robert Moses State Park to reduce erosion and improve the coast’s resilience.

It is the first of about 11 contracts USACE anticipates awarding for Fire Island-Montauk, Lulka says. Future contracts will include inlet sand bypassing and monitoring, beach and dune fill, feeder beach construction, and the removal of some groins and jetties. About 4,400 structures in the 10-year floodplain on the bay side will also be eligible to be elevated and floodproofed.

Some post-Sandy projects have been completed. The Corps finished a $28-million Coney Island resilience project in 2016 that included construction of four T-groin structures designed to minimize sand erosion and reduce future storm damage to buildings in the area.

In 2019, the Corps completed a $130-million coastal storm risk reduction project in Long Beach, N.Y. Contractors built four new groins and rehabilitated 18 existing ones with 284,000 tons of rock, and also widened a beach and reinforced sand dunes with 3.2-million cu yd of sand.

"Countless homeowners and businesses in Long Beach, Lido Beach and Point Lookout were hammered by Superstorm Sandy and required a massive federal investment to both recover and to rebuild the island's defenses against the next storms," Sen. Chuck Schumer (D-N.Y.) said in a statement at the time.

And there still may be more projects in the future. The Corps Philadelphia district released a draft report in August for a coastal storm risk management study for Long Island’s Nassau County. The tentative plan calls for elevation of more than 14,000 homes and dry floodproofing of more than 2,500 industrial and commercial properties. A final report is in the works.

Beyond Long Island, the Corps New York District is also working on plans for Staten Island storm projects, to be divided into eight contracts, and has undertaken a variety of post-Sandy projects in New Jersey. The ageny also is studying possible resilience and sustainability work for the New York-New Jersey Harbor region and its tributaries.

One Corps plan to build a $119-billion sea wall with gates between the Rockaway peninsula and New Jersey received a major setback in 2020 after then-President Donald Trump called the plan "costly, foolish & environmentally unfriendly" in a tweet and had funding for the study pulled. Some locals have also criticized that plan. In 2019, NYC Comptroller Scott Stringer wrote a letter to Corps officials criticizing offshore storm barriers for not being enough to protect the city from rising sea levels, even if they could protect it against storm surge.

"The failure to address tidal or nuisance flooding is a crucial omission in the Corps' barrier-centric proposals," Stringer wrote.

Other alternatives the Corps has examined include systems of multiple surge gates, floodwalls and levees. However, the major sea wall project could still be revived, possibly as part of an even larger plan. The Biden Administration returned funding for the study, and work on it resumed in October 2021. The Corps says a tentative plan for that project may be ready in 2022, with public review to follow.

“We’re educating the public on the value, economically and from a safety perspective, and an environmental perspective, that these projects are going to have over the long term, particularly in the climate change world,” Seebode says.