This website requires certain cookies to work and uses other cookies to help you have the best experience. By visiting this website, certain cookies have already been set, which you may delete and block. By closing this message or continuing to use our site, you agree to the use of cookies. Visit our updated privacy and cookie policy to learn more.
Home » Colorado State University Installs Innovative Geothermal Energy System on Campus
Mountain StatesMountain States Construction Projects
Best Projects

Built in the 1960s, the Colorado State University steam system was designed to provide heating and cooling for the busy urban campus. However, as the Fort Collins campus grew, the system became costly to repair and was reaching its capacity.

The university decided to move a third of the campus off the carbon-intensive steam heating and chilled-water cooling systems, but it took more than a decade to figure out how to accomplish the monumental task; it was too expensive to move the district heating plant, and there was no room to expand the buildings near the oval section of CSU’s campus.

After a life-cycle cost analysis, a geothermal exchange was chosen as the best-value option, weighing capital cost savings, carbon footprint reduction and utility and maintenance costs. The innovative ground source heat pump uses the thermal energy of the earth and the refrigeration cycle to provide heating and cooling, a solution that Adolfson & Peterson project manager Cole Hovendick says is a major step toward CSU’s long-term goal of achieving 100% clean electricity by 2030.

Work entailed taking the 300,000-sq-ft Moby building—a multi-use complex with an arena and natatorium—and updating 60-year-old components and infrastructure original to the building. The project’s primary goal was to remove the high-pressure steam lines and air-cooled chillers that feed the Moby complex and replace them with a six-pipe geo-exchange system. It was designed with 342 deep-well bores, each 550 ft deep, which are then piped into 12 high-efficiency water-to-water heat pumps.

The heat pumps generate heated and chilled water, which is sent to the existing piping systems, explains mechanical engineer Bert Baiotto of The Ballard Group. “All of this was done in the existing building without expanding the building footprint,” he says, “and to put all the equipment in the existing mechanical rooms was a feat, to say the least.” 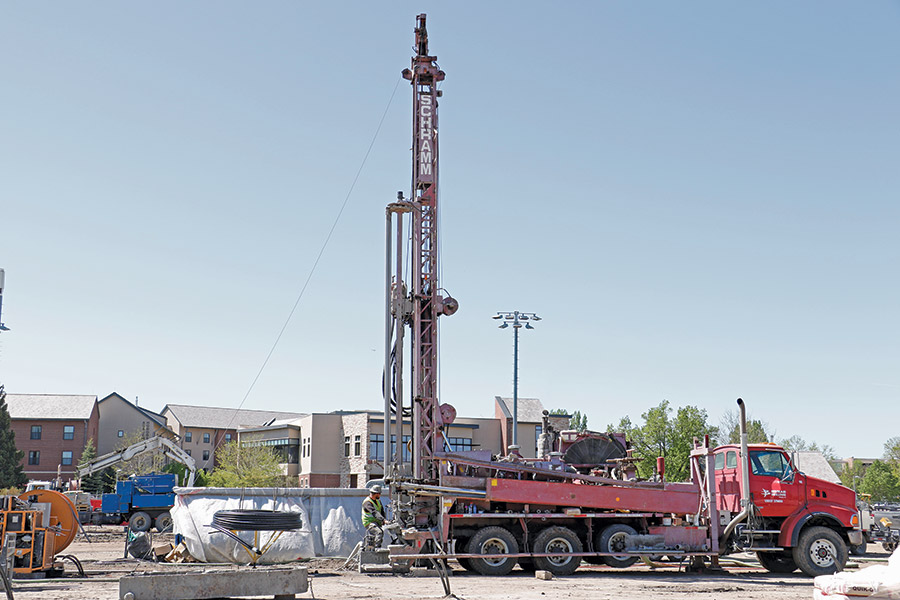 Once the wells were drilled, they were filled with more than 70 miles of pipe. The pipes were then filled with water containing 25% glycol to prevent freezing, creating a closed circuit.
Photos courtesy of Adolfon & Peterson

“We were working with fairly new technology that had never been done on this scale,” Hovendick says. The project required a large-scale drilling operation to house the geo-exchange technology, with everything constructed over just one summer. The 342 boreholes, 70 total miles of pipes, 8.8 acres of civil work and 1,200-ton system is the largest geofield in Colorado and one of the largest geothermal systems in the western U.S.

Water exchange heat pumps are fairly new equipment and having both heating and cooling is unique, as is a six-pipe system, Baiotto says. The deep wells provide a “free” heat-absorption (winter) and heat-rejection (summer) source for the water-to-water heat pump equipment.

Water temperatures available from the geo-exchange field provide significantly higher operating efficiencies than traditional air-source heat pumps, and each heat pump is capable of generating simultaneous heating and cooling, allowing the waste heat of compression during cooling to be used for heating both the swimming pool and the arena. 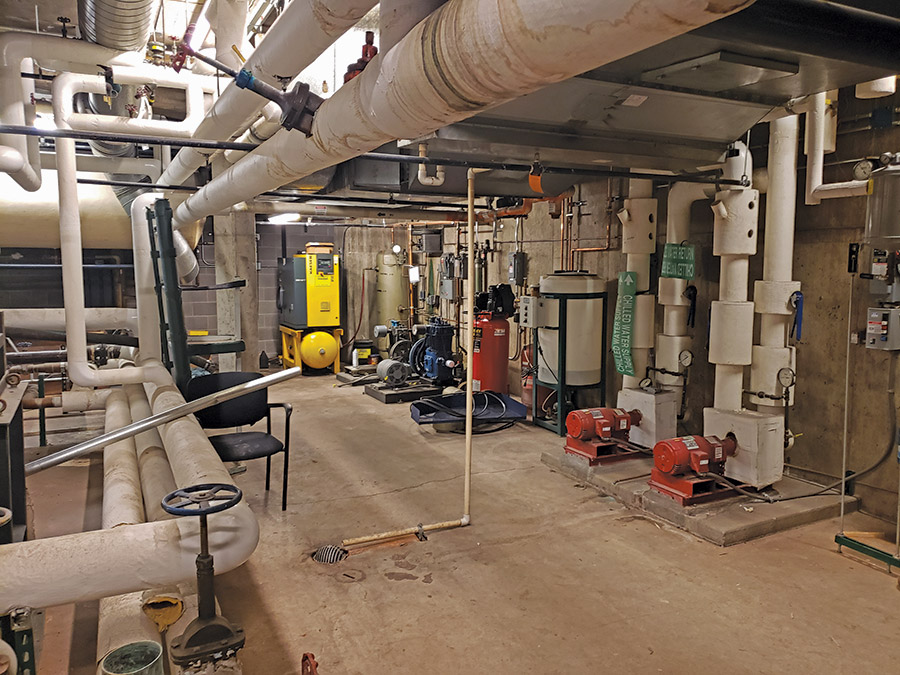 The mechanical equipment in Moby was built in 1961. Instead of building an addition to the arena, the geoexchange project was seen as an opportunity not only to modernize Moby but also to implement a more efficient system.
Photos courtesy of Adolfon & Peterson

Drilling the wells is a specialized niche market, and three separate boring contractors worked concurrently to complete the 340 holes in a three-month timeframe. “We had six drill rigs and a dozen guys running around in the field with no accidents or injuries in a compressed period of time,” Hovendick adds.

COVID-19 sent students home and canceled graduation, and that allowed the contractor to shut down the steam system a few weeks earlier than anticipated to get a head start on drilling. However, while the earlier start helped, it also took away some preplanning time, Hovendick says, and the pandemic also created supply issues and material challenges. “Our priority became getting equipment and materials on site within an accelerated schedule, and we often had to adjust on the fly,” he says.

The first hole was created in early April, and drilling was completed by early July. It was a fast project, with lots of things going on at the same time. A second phase of the project replaced the eight central air handing unit fans serving the main arena with high-efficiency ECM fan arrays.

“It was an exciting project with an awesome design. We’re hoping to do more of these types of projects, and CSU is already getting phone calls inquiring about the technology,” Hovendick says.