OWNER: Architect of the Capitol

After more than a century of use, aging systems were creating ongoing safety, health, environmental and operational issues in the Cannon House Office Building—the oldest congressional office building on the U.S. Capitol campus.

The $659-million Phase 2 revitalization, a joint venture of Clark Construction and The Christman Co., set out to modernize and renovate the portion of the building that faces Independence Avenue—arguably the building’s most prominent facade. The project was part of the 10-year, five-phase Cannon House Office Building Renewal project, led by the Architect of the Capitol.

In addition, the existing fifth floor was demolished and replaced with a new steel-framed structure. Original stonework was also restored on the historic facade.
The entire project scope needed to be delivered while the office building remained occupied and fully functional, necessitating strict limitations on working hours and site access. 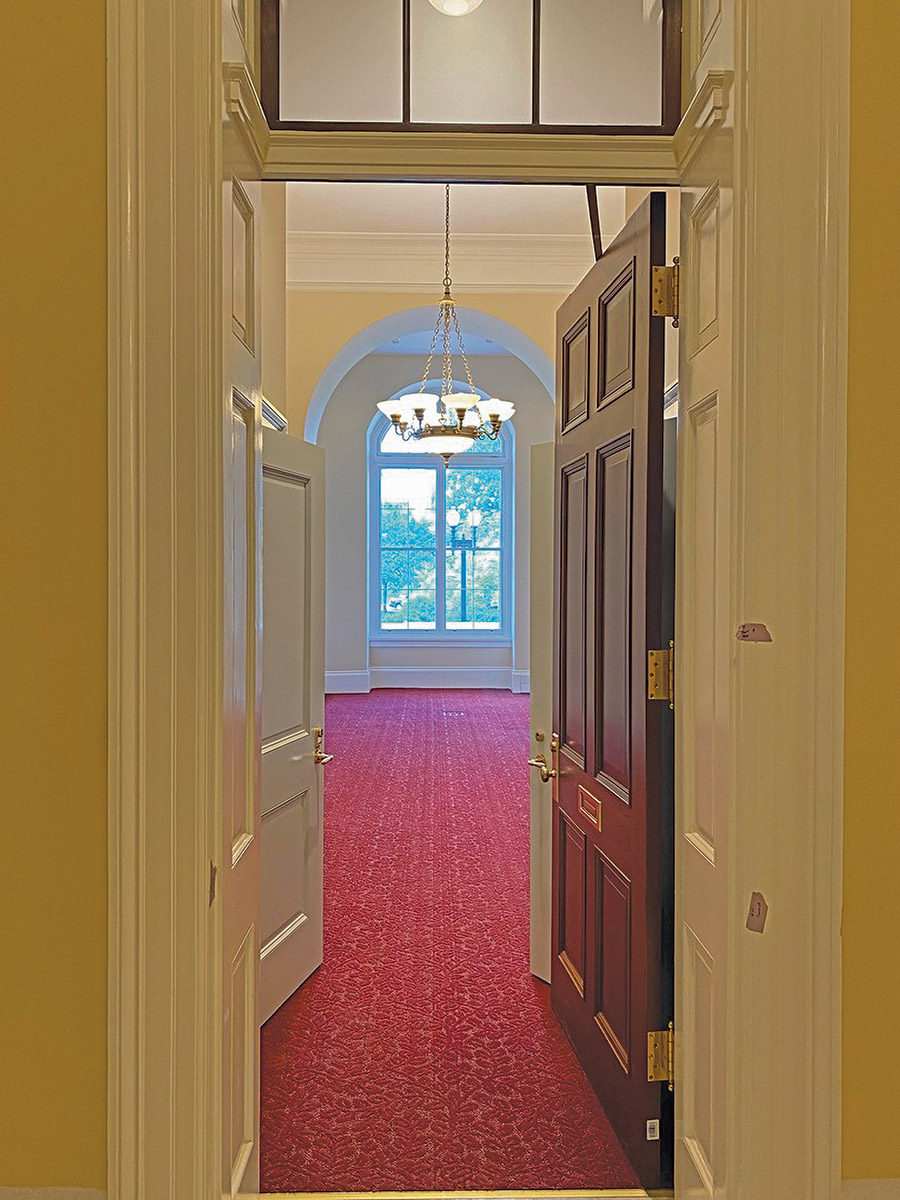 “The scope was somewhat unknown,” he recalls. “There are always unforeseen conditions with a restoration project. You really don’t know what you’re facing until you uncover everything.”

Among the discoveries was hazardous material in plaster walls on the building’s first floor that required full abatement and removal. Matching the plaster required a lengthy three-coat process and took more than 30 days to properly cure. At one point, more than 40 plasterers were working in the building.

“Plaster is a highly specialized trade and not that prevalent in the D.C. area on this scale,” Tesoriero says. “The plasterers had to be highly qualified, so we brought them in from all over the Northeast and mid-Atlantic to fill the need.”

Tesoriero says the building’s systems were almost entirely replaced, and few of the raceways and existing routing were reused.

“Very few pathways could be preserved,” he says. “In the basement, there was a poured concrete plenum ceiling that had existing piping in it. We had to take out that entire ceiling and demolish everything. The structural components on Floors 1 through 4 were brick, so there was a lot of core drilling to create openings to allow these [systems] in.”

When the building was first occupied in 1908, it housed a total of 397 offices. Five years later, it had already outgrown the space, so an additional 51 rooms were added by raising the roof structure and adding a fifth floor. Part of the fifth floor sloped, which made it only usable for storage.

As part of the Phase 2 renewal, the fifth floor was demolished and a new level was constructed with steel framing that ties directly into the existing structure. Although the fifth-floor structure was new, the marble flooring of the original corridor was preserved. 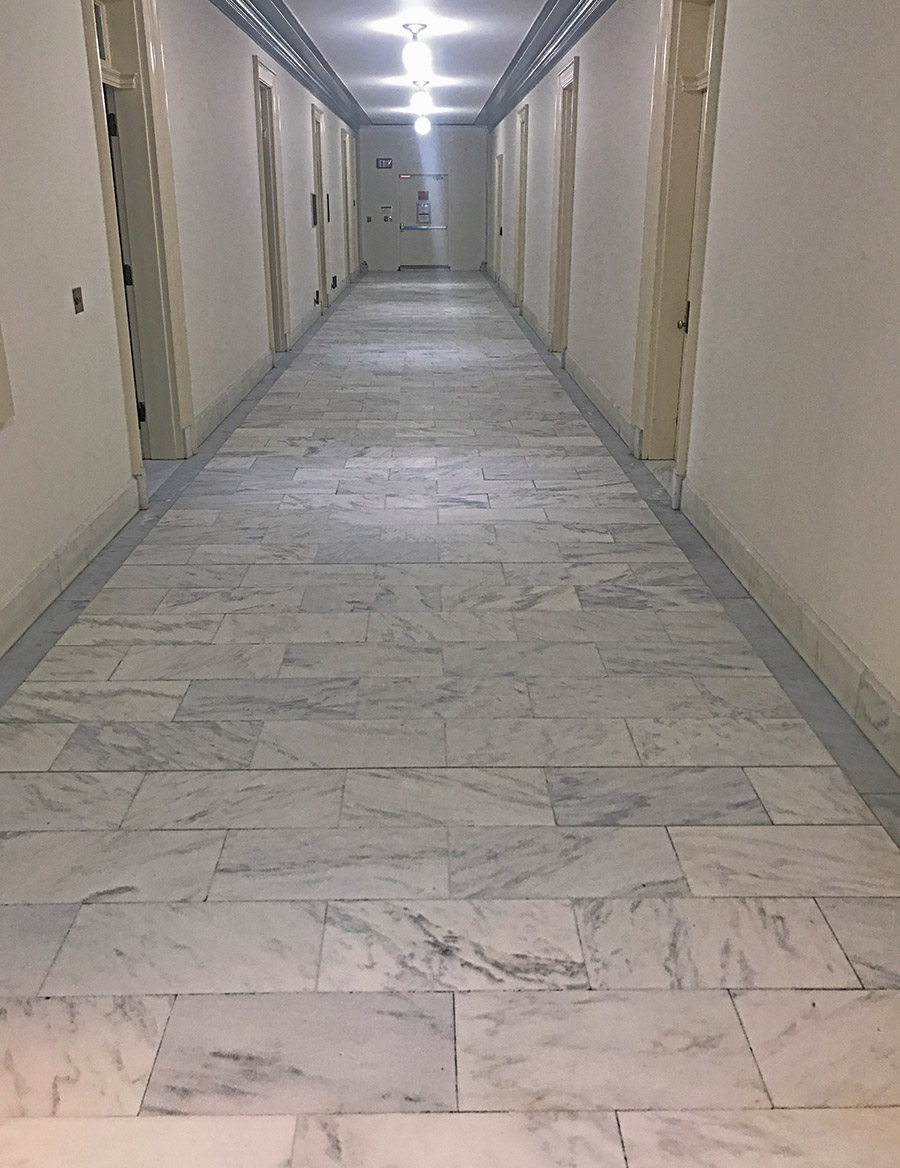 Before demolition of the structure, the team repaired, refinished, sealed and protected the floor with layers of non-staining craft paper, a poly water barrier, 2-in. rigid foam board and two layers of ¾-in. plywood. Once protected, the new fifth floor could be constructed around it.

One of ENR’s judges said that the team went above and beyond to protect the historic marble.

“I would never put that many layers of protection on a floor, but I guess that’s one way to make sure it doesn’t get screwed up,” the judge said.

The historic exterior was also restored as part of the renewal project. All original window sashes were removed and taken to an offsite workshop, where they were stripped of previous finishes, repaired, restored and refinished. While work on the sashes was underway, existing window frames remained in place. Stripping, restoring and refinishing the window frames took place on site. 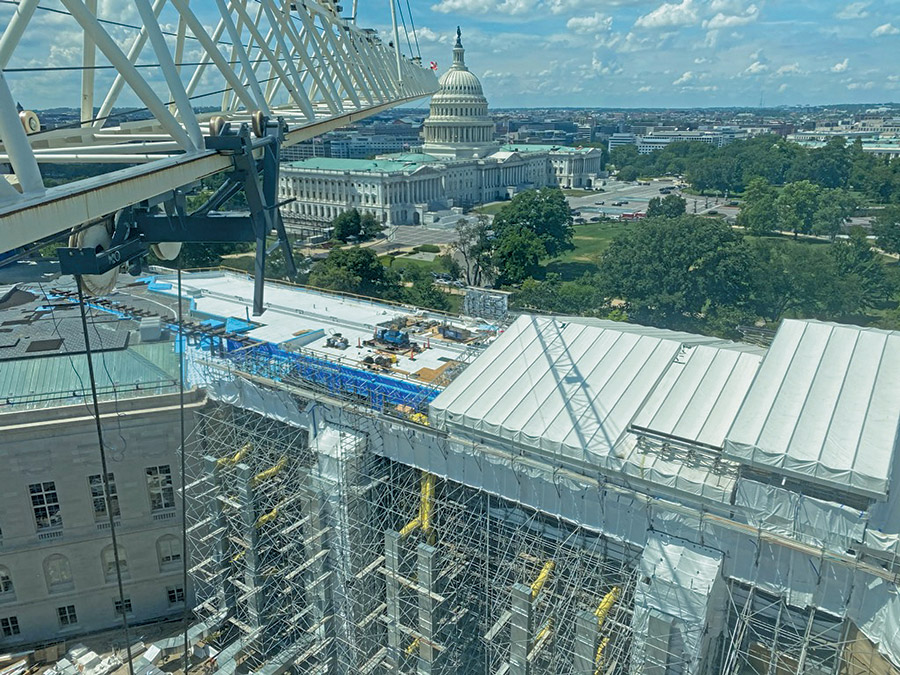 The original door frames and casings were stripped of lead paint, restored and refinished in place. The door slabs were then reinstalled in their original locations. The original hardware was integrated with new components to facilitate modern function and security and then reinstalled.

Judges were impressed that the project team logged more than 1.3 million work-hours with zero lost-time incidents. A “work plan” standard was established for all at-risk activities. 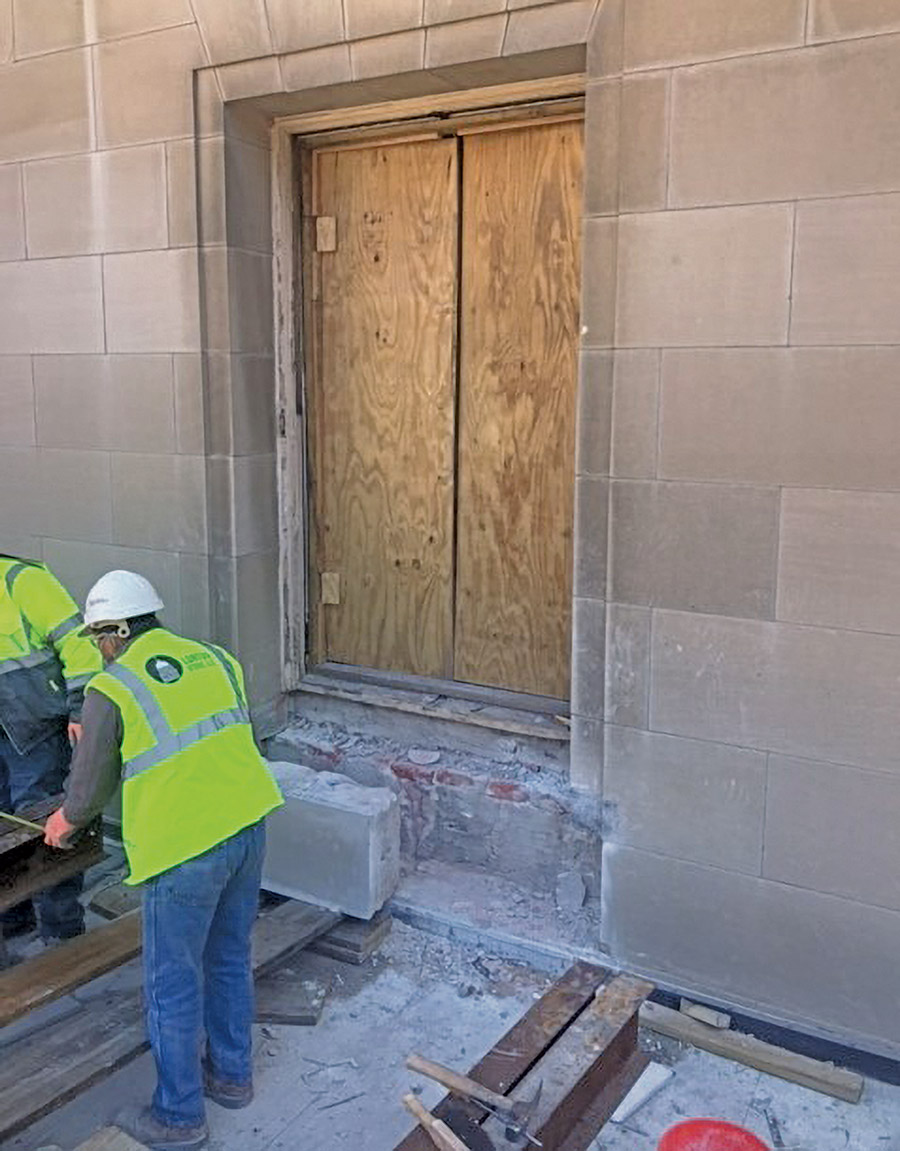 The plans were developed by the subcontractors as well as the operations and safety teams. The plans were then reviewed by the owner’s safety personnel and ultimately approved by the House of Representatives’ construction management team. Those work plans became especially critical when dealing with lead paint and asbestos in areas immediately adjacent to active congressional office space.

In order to work in an occupied building, temporary fire-rated walls were installed to isolate construction activities from the active parts of the building. The project team worked with subcontractors, fire protection engineers, quality control professionals and the fire marshal to create a hybrid wall that could be constructed from within the construction area.

The strategy allowed the fire wall to be located within the interior door frames of the construction area instead of in occupied corridors. As a result, work took place without affecting occupied areas and ensured temporary walls remained hidden. Rather than seeing wire walls, building occupants saw closed office doors when walking through the corridor.

“They left the doors so, as people walked by, they looked like closed doors, but they were fire walls,” said one judge. “That stuck out in my head for the aesthetic for people still occupying the building.”