OWNER: The Port of Virginia

Working within a facility that was already moving more than 22 million tons of cargo annually required an extremely detailed level of coordination. The port needed to maintain daily operations, which encompassed a wide variety of changing needs and conditions. Nearly every day, construction work areas were subject to owner-directed changes intended to accommodate the anticipated flow of activity at the port that day.

“I imagined trucks zipping around everywhere and loading containers, and they’re trying to build a project in the middle of it,” said one judge. “They had to change routes daily for the trucks and coordinate all that.”

The project aimed to reconfigure the container storage area into 30 stacks served by 60 new rail-mounted, semi-automated overhead gantry cranes as well as by two new ship-to-shore cranes. The gantry cranes were manufactured in Poland and shipped directly to the location. 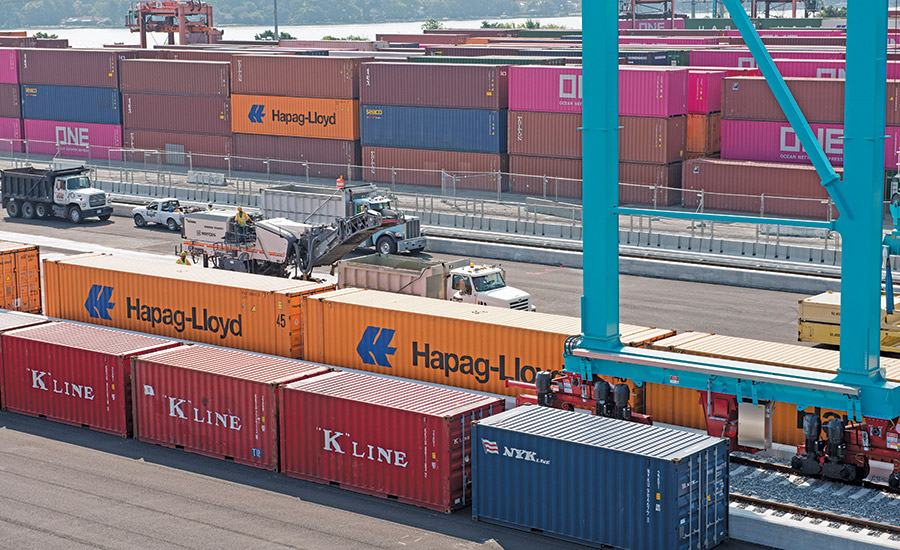 Jonathan Holt, project executive with general contractor Allan Myers, said the owner needed the project to be phased and sequenced to allow parts of the facility to come online while work continued in other areas. Although delivery of the gantry cranes wasn’t under Allan Myers’ contract, the team still had to coordinate those deliveries to ensure the project stayed on schedule.

“If we didn’t create the new framework on which those cranes would operate, we’d be responsible for the waiting time on these barge container ships that brought the cranes over,” Holt says.

Driven by the need to have ongoing delivery of the new facility within a tight schedule, the owner established a total of 65 milestones on the project. Holt says each milestone carried significant liquidated damages if the team missed any of them.

“There was a high risk for not meeting any one of those milestones, and they all became cumulative,” he says. “Those [damages] can stack up if you continue to miss dates.” 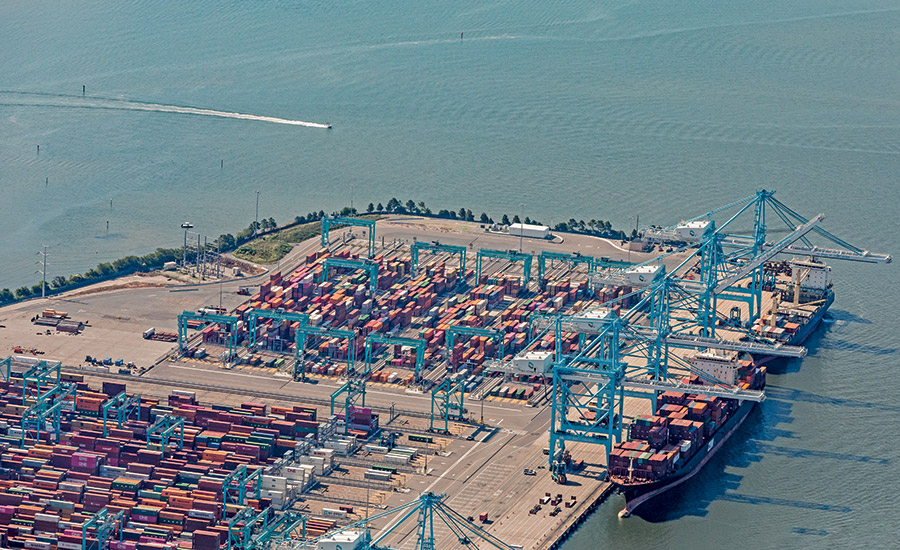 He adds, “That would keep me up at night. How would we get this done if just one of our subcontractors or one of our own operations didn’t go as planned? We had that hanging over our heads 65 times over the course of this project.”

From the project’s early days, the team faced some schedule and budget hurdles. Holt says the owner initially scaled back the scope to help reduce costs, a process that delayed the original start date. As the project progressed, Holt says the port decided to add back some of that scope, further challenging the schedule. 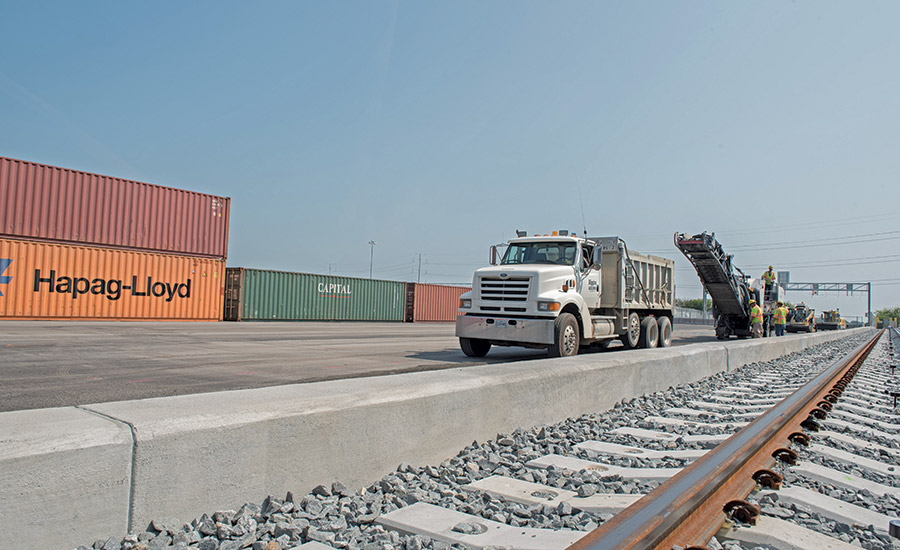 “When they added back in some scope, that came with a new set of milestones,” he recalls. “That proved to be one of the bigger challenges on top of everything else.”

Although the team followed a strict schedule of milestones, Holt says it was always pursuing better, faster and less costly ways to meet its goals. Ultimately, that helped contribute to more than 60 owner-initiated change orders, 226 drawing revisions and more than 300 requests for information. 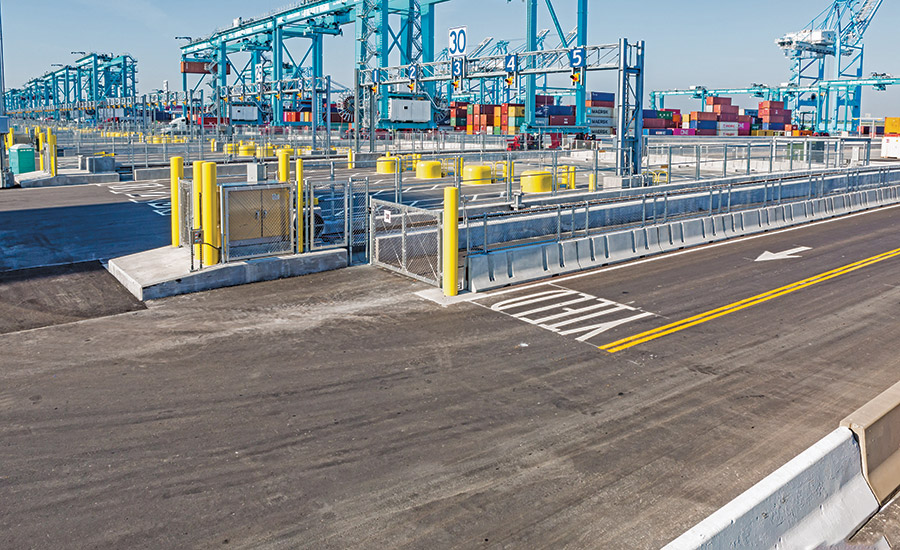 The first of several interim milestones came early in the project, so the team adopted an accelerated procurement strategy. Myers identified and assembled key members of the project team during the bid phase. That enabled the development of work plans, shop drawings, schedules and other deliverables in advance. Holt says the strategy was critical for delivering a new electrical substation, which would be used to power the gantry cranes. Much of the station required specialized equipment—such as switchgear and transformers—that had long lead times.

“Power needed to be available before the first cranes arrived so they could power them up and commission them,” he says.

Precise operations of the automated gantry cranes required concrete underneath the facility to meet extremely tight tolerances. The paving tolerance was a maximum deviation of 1/8 in. over 12 ft.

Finished grades had to be sloped from 0% to 1% longitudinally and transversely to ensure containers would sit level when stacked five high.

Like the paving, construction of 61,000 linear ft of rail bed and tracks for the gantry cranes required absolute precision. To support the tracks, Myers constructed 80,000 linear ft of 30-in.-high, 18-in.-wide cast-in-place reinforced concrete retaining walls. Running along each side of the tracks, the walls kept 40,000 tons of ballast stone in place between them. 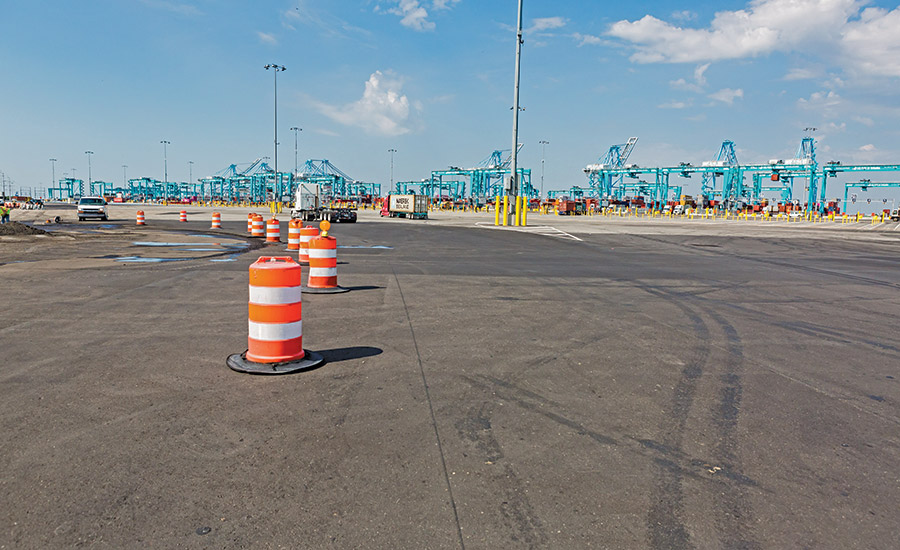 Besides completing the project on time and on budget, the team  achieved a spotless safety record. ENR  judges were impressed that the project suffered no lost-time accidents or Occupational Safety and Health Administration recordable incidents during two-and-a-half years of construction.

As part of its project-specific safety plan, all site employees attended a four-hour safety class—required by the owner—on the dangers of working in an active port facility.

Every week, employees and subcontractors met to go over the week’s work plan, changes to work areas, key directives from the owner and “near misses” observed the previous week. A safety committee met monthly to ensure any unsafe conditions or practices were modified. 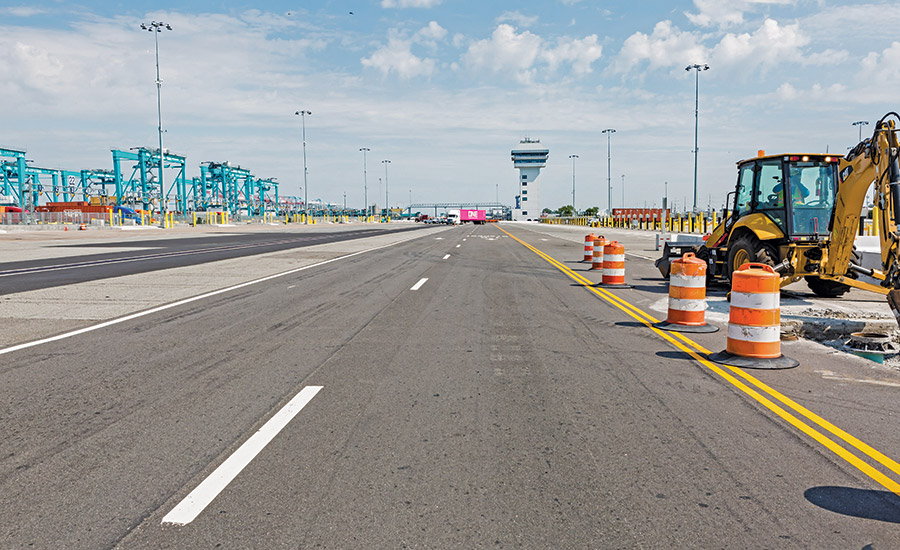 The owner’s safety team performed a monthly audit to ensure coordination between construction and port operations. Each project team member completed two leadership walk-throughs per month to connect better with field operations and hear directly from laborers and operators about safety concerns.

“From a level of complexity and the amount of coordination with the operations of that facility, the stack optimization project blew me away,” said one judge.