This website requires certain cookies to work and uses other cookies to help you have the best experience. By visiting this website, certain cookies have already been set, which you may delete and block. By closing this message or continuing to use our site, you agree to the use of cookies. Visit our updated privacy and cookie policy to learn more.
Home » Peninsula Turns Ex-Jail Site Into Bronx Community Centerpiece
New YorkNew York Construction Projects
Digging Deeper | Affordable Housing/Mixed Use

The Bronx’s Hunts Point district has a front-row seat for the cutting edge of community-driven urban redevelopment as the $300-million, 850,000-sq-ft Peninsula completes the first of three phases that will transform its neighborhood and redraw the local map.

The team’s deep coordination is helping rehabilitate the five-acre brownfield and manage unique building challenges, such as significant excess subsurface water the team found on the steeply sloped site when it broke ground in 2019 on the $121.5-million first phase. “We expected water, but we did encounter more than expected,” says Ismene Speliotis, executive director at MHANY Management, a nonprofit housing association that teamed with Gilbane Development Co. and Hudson Cos. on the winning 2016 bid. 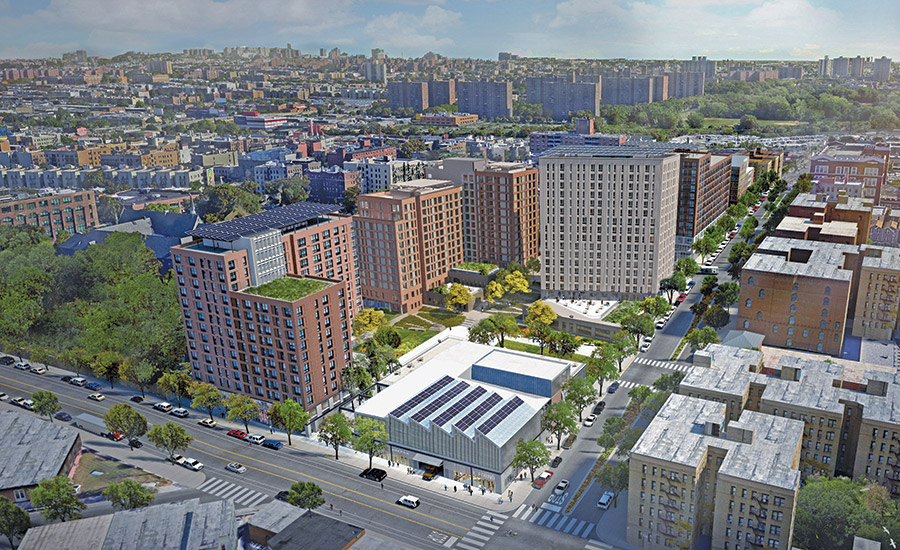 The Hunts Point project is a community-driven development after a former jail had long cast its shadow on the neighborhood.
Photo by CC Sullivan

The jail’s foundation had formed a dam holding back water, but its demolition reshaped those flows, says Dimitrios Katehis, construction executive at Gilbane. “The water table and how the water reacted underground changed,” he says.

The hill is another challenge, with the first phase starting at the bottom, says Bernard Ruf, president at Broadway Builders, a Hudson affiliate that along with Gilbane affiliate Bay Shore Builders has formed the Hunts Point Builders joint venture serving as construction manager on the apartment buildings. “Water races down the slope of the property,” Ruf says. “That’s where the water wants to be.”

One example: updated geotechnical designs lifting the second-phase garage structure to a higher elevation. “We were better able to calibrate where the garage should go to avoid as much water as we can,” Katehis says.

Such solutions flowed from determined teamwork—often on crowded Zoom calls during the pandemic, says Claire Weisz, principal in charge at WXY, an architect and urban design firm that partnered with Body Lawson Associates on the Peninsula design. “It takes a lot of people to work together on a vision to break up a superblock and create an inviting realm,” she says. 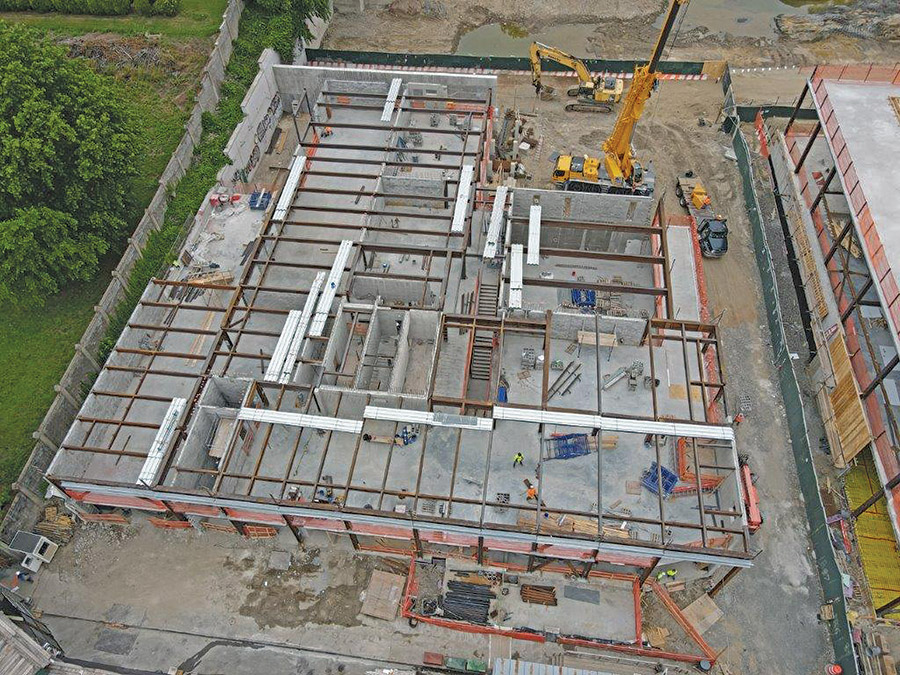 When the city shuttered Spofford a decade ago, the task of reimagining the site remained. The EDC in 2014 convened the city’s Dept. of Housing Preservation and Development and Housing Development Corp., civic and elected leaders, and community groups to field requests for designs to mix affordable housing with space for local enterprises and organizations.

It will be a living hub reconnected to the street grid, says Victor Body-Lawson, principal of Body Lawson Associates. “The design makes this development integral to the community and creates a sense of place for the people who will live there,” he says.

The design also turns away from cookie-cutter affordable housing apartment farms, with each building having distinct materials, tones and ground floor uses, Body-Lawson says. “It’s predominantly brick and metal, which gives it continuity,” he says, but “each building will have its own identity.” Another critical aspect was flipping the site’s character away from foreboding jail to free-flowing campus. “The majority of windows will have views of the open spaces or great views of the city,” Body-Lawson says. “It’s the Jane Jacobs idea of eyes on the street.”

The design inverts Spofford’s fortress-like perimeter that walled off the complex and looked inward onto interior yards, Weisz says. “The open spaces are where Spofford’s buildings were and the [Peninsula] buildings are where the courtyards were,” she says. It also opens corridors to cross the Peninsula where the superblock had cut off two city streets, she adds.

Maria Torres, co-founder and president of The Point Community Development Corp., said in a statement that the project is “closing the dark chapter of” the jail’s impact on the low-income neighborhood and called it “an affirmative step toward a clear and meaningful improvement in the quality of life for our community.”

The design also had to account for the site’s topography, a 50-ft slope, which inspired the tiered design for the three phases and courtyards, Body-Lawson says.

Execution required extensive rehabilitation that began in 2018, with Roux Environmental Engineering helping to tackle brownfield issues. Those included contaminated fill, leaking underground storage tanks and asbestos abatement, says Joshua Weisstuch, development director at Gilbane. “There was a lot of work to remove soil, clean up spills and other remediation for both Phase 1 and Phase 2,” he says. That effort earned a Big Apple Brownfield Award for Community Open Space this year.

The pandemic fortunately had limited impact on the first phase, mostly in materials supply, Ruf says. It’s close to schedule, with the apartment tower topping out last year and interiors now more than three-quarters done.

The pandemic may delay the start of the second phase, whose 14-story and 17-story residential buildings, garage and courtyards are now set to start next year and open in 2024 or 2025, with the third phase—a 12- to 14-story apartment building with additional open space on top—to follow. 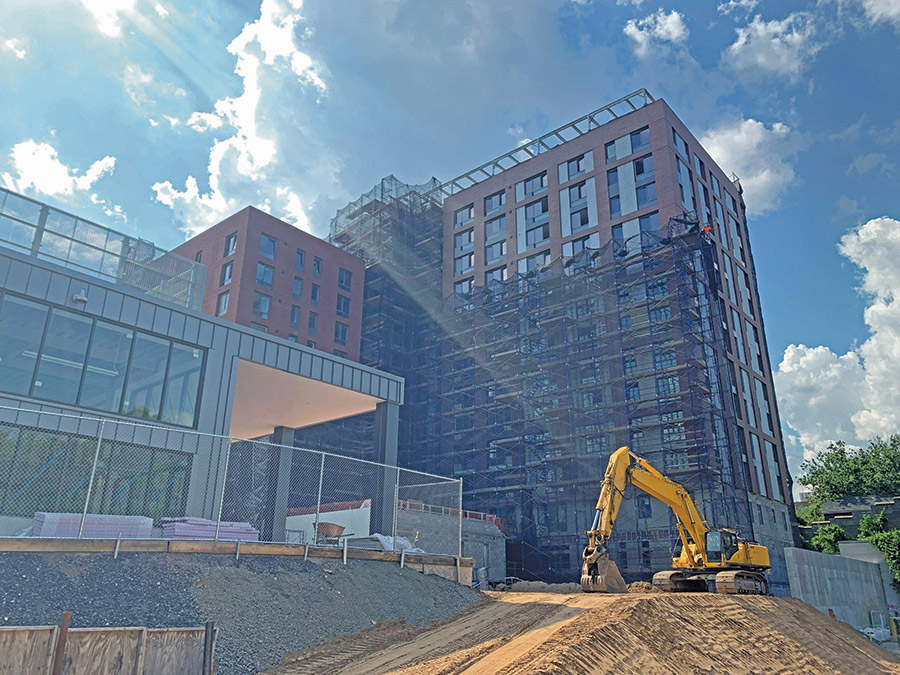 The first building nearing completion—with Richter + Ratner as construction manager—is the 59,000-sq-ft steel-framed, skylight- and solar panel-topped commercial and light industrial structure, which has two outdoor spaces, including an upper terrace. Most of the structure will house tenants tied to food manufacturing, with smaller dining or food service-oriented commercial spaces on the ground floor.

The entire west facade is a glass plank exterior, bringing in the daylight, particularly to the second floor, and its open spans are suitable for light industrial functions, MHANY’s Speliotis says. “Use of steel allowed us to achieve those goals structurally,” she says.

The design aims to maximize utility for its business tenants, Weisz says. “You have this really good ambience of natural light, which is the goal for industrial buildings to lower energy costs for lighting, heating and cooling,” she says.

The industrial structure will also be a zero-waste building, with an onsite biodigester and a loading dock equipped for advanced recycling and composting, Weisz says. The neighboring residential tower will be able to use that biodigester and composting equipment as well as a baler that efficiently recycles cartons, Speliotis says, which “will save so much on garbage collection.”

The first phase residential building is using block and plank construction over a steel podium, Katehis says. The second phase, whose structures will be cast-in-place concrete, may bring added challenges because of the garage and crane siting constraints, Weisstuch says. The team is assessing how it could construct the buildings simultaneously and only use a single crane, he says.

The construction team also is extensively using local trades and vendors. Ruf says it is already exceeding its goals as well as its minority, women and equal opportunity hiring targets. According to the Peninsula website, the team has committed to a 35% MWBE goal. Another benefit to workers is use of Triax Spot R technology, a digital personnel tracker that maintains site security, monitors and locates crews onsite, and registers impact and triggers an alert if a worker falls, Ruf says. 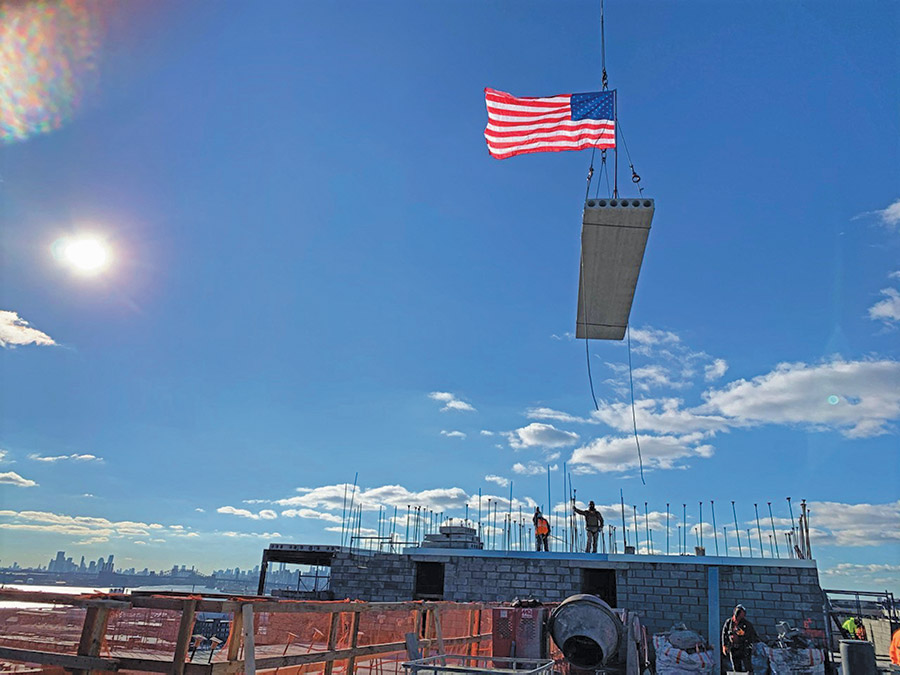 Plaza for the Public

The Peninsula’s most visible addition to Hunts Point is its 52,000 sq ft of open space and recreational areas— with a public plaza as its signature feature—on a design by Elizabeth Kennedy Landscape Architect. “The full plaza will make it seem as a seamless community when it’s finished,” Speliotis says.

The goal was to create an open space appealing to Peninsula residents as well as people in the larger community, says Katherine Gray, affordable housing development director at Gilbane. But it also had to connect the different phases across several elevations and slopes, she says. “The design creates a series of terraced spaces connected by steps and a ramping solution to make the space 100% accessible,” she says. “It makes it feel inclusive but also an open space resource for the whole neighborhood.”

The design features a mix of ramps, steps, seating, trees and water features throughout and spaces for performances, Body-Lawson says. “It’s designed almost like an amphitheater,” he says.

The design also thoughtfully planned plantings throughout, including on a plaza above the garage, Gray says. “It has trees to create shaded areas and open grassy areas for active play, along with a lot of native species in planting beds,” she says. “These are strategies that will attract people who live in the building to develop a sense of community, to promote ways to come together.”