The Colorado Dept. of Transportation is betting that its biggest project ever—the $1.2-billion Central 70 expansion—will prove that highway public-private partnerships work better in Colorado than they have in other areas of the country. The Interstate 70 project includes reconstruction of a 10-mile stretch of freeway from Brighton Boulevard in central Denver to Chambers Road in Aurora to the east.

The project adds one new express toll lane in each direction and removes a 57-year-old, 1.8-mile-long viaduct, replacing it with a lowered highway that includes a 1,000-foot-long cap—a covered portion of the highway that will be the site of a four-acre park to help reconnect neighborhoods long divided by the freeway. 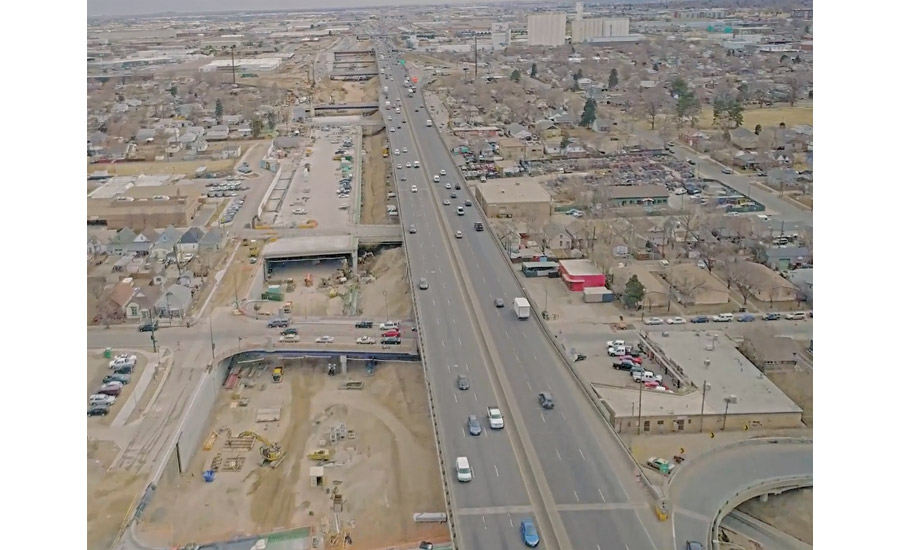 First proposed in 2004, CDOT says the Central 70 project will alleviate existing congestion on I-70, accommodate projected increases in traffic and address issues with the viaduct, which carried a key portion of the six-lane roadway and was deemed structurally deficient in 2008.

Originally designed and built through Denver in the 1960s and ’70s (a time with many fewer environmental regulations), the highway and its viaduct cut a swath directly through the Denver neighborhoods of Globeville and Elyrea-Swansea (GES), located just northeast of downtown.

“The challenge was, how do we try and do the best we can to make that wrong right,” says Bob Hays, project director for CDOT. He says that when complete, Central 70 will reduce the impact of highway noise on the neighborhoods and improve mobility. New cross streets and bridges over the at-grade highway include 8-ft to 10-ft sidewalks and ADA-compliant crossings, vastly improving pedestrian safety versus traversing beneath the old viaduct, a dark corridor with no sidewalks. 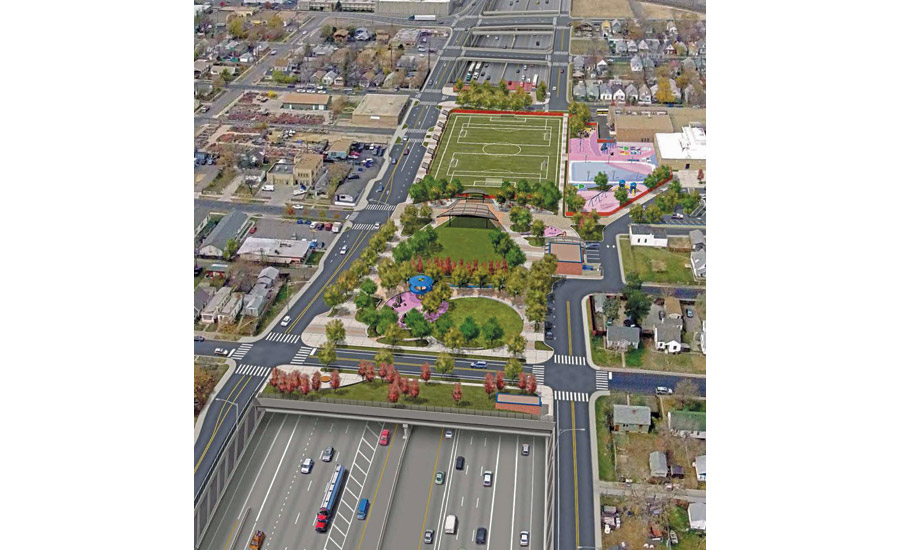 The four-acre park that will be constructed over the capped section is a defining feature of the lowered highway. Soccer fields will be shared with Swansea Elementary School, with the entire park open to community use during nonschool hours.
Images courtesy of CDOT 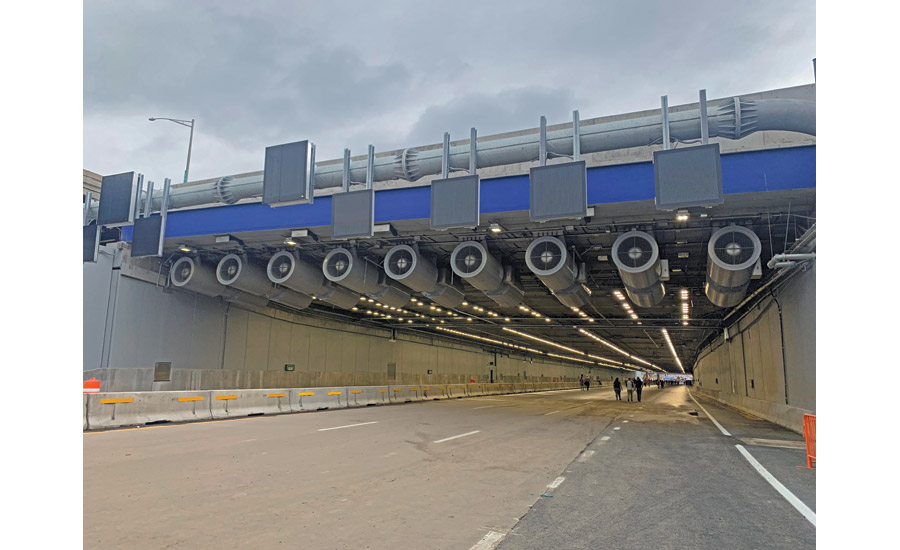 To raise awareness of the upcoming Mile High Shift, CDOT and KMP hosted public and media tours through the lowered and capped section of Central 70 before it opened earlier this year.
Images courtesy of CDOT

The plan was not without controversy. It required demolition of 56 residences and 17 businesses and faced opposition by neighborhood and environmental groups concerned about the project’s impacts.

Multiple pieces of litigation to stop the project were largely unsuccessful, except for an eventual settlement approved by the Colorado Transportation Commission in December 2018, resolving the last legal challenge.

Per the agreement, CDOT contributed $550,000 for an independent neighborhood health study, $25,000 for a monitoring position on the study’s team and another $25,000 for additional trees and landscaping along neighborhood boundaries.

CDOT is monitoring and reporting PM10 (particulate matter with a diameter of 10 micrometers or less) on its project website, per NEPA regulations.
But Gregg Thomas, director of the Denver Dept. of Public Health and Environment’s environmental quality division, said via email that the project goes beyond NEPA’s legal requirements, citing the city’s partnership with CDOT to independently monitor a “full suite of real-time air pollutants.”

That includes hourly monitoring of smaller PM2.5 and black carbon at Swansea Elementary School, whose students will use the park and soccer fields being built on the freeway cap.

“This was the first major highway reconstruction project I am aware of that was monitoring for a full suite of real-time air pollutants immediately adjacent to the project,” Thomas says.

The monitoring will continue post-construction for at least six months, with ongoing monitoring at the school funded by the city’s Love My Air program. 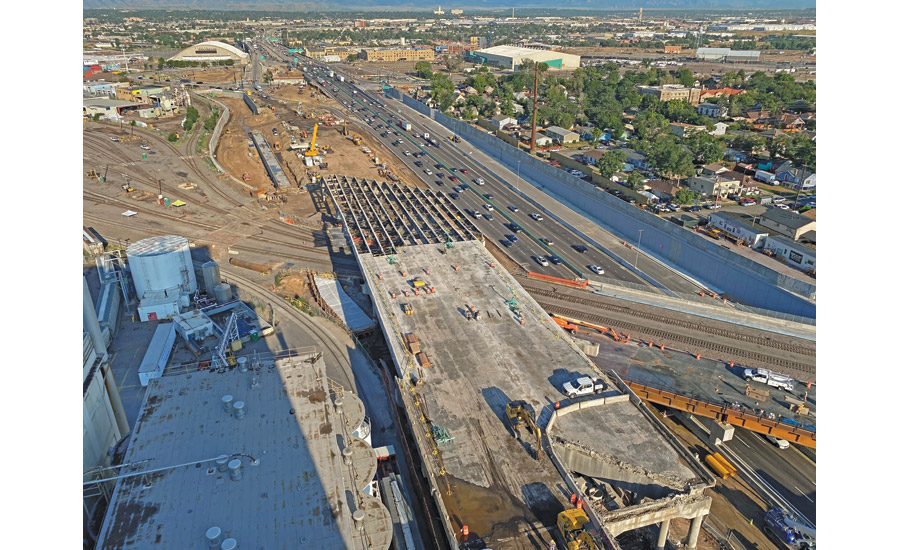 Viaduct demolition over Union Pacific rail lines requires sawcutting the deck and the use of a 1600 crane (not pictured) to pick the steel girders up and over the rail lines.
Images courtesy of CDOT Traveling under the old I-70 viaduct was dark for motorists and foreboding for pedestrians. The new at-grade crossings over the lowered section will have wide sidewalks and ADA-compliant crossings.
Image courtesy of Cyrus McCrimmon

An early challenge for Central 70 was figuring out how CDOT would foot the $1.2-billion bill. The CTC recommended delivering the project via a public-private-partnership in early 2015.

“Once you evaluate all the risks that were associated with the project—the way that we as an owner could share or transfer risk to the private sector—it made a lot of sense [after] all this risk analysis for us to go P3,” says Hays.

After the Federal Highway Authority’s final approvals in January 2017, CDOT embarked on an 18-month long procurement process for a 30-year, design-build-finance-operate-maintain (DBFOM) partner. At the end of the 30-year term, CDOT will assume ownership and be responsible for ongoing maintenance.

“We were able to negotiate with the four shortlisted teams, meet with them and negotiate where the risk should lie,” Hays says. “By the end of it, we had come to a balance where the private side was willing to bid on the project, but we were still getting all the benefits of shifting risk away from taxpayers.” 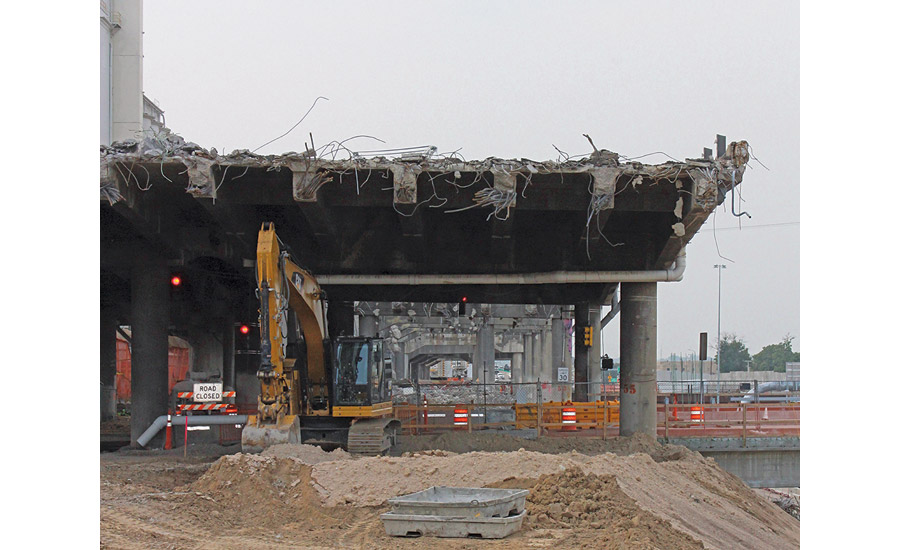 Demolition of remaining portions of the I-70 viaduct threads a needle between new cross street traffic and around existing homes and adjacent businesses.
Image by Nancy Kristof

With a groundbreaking targeted for summer 2018, the KMP team relied on strong relationships and “good old-fashioned communication” with CDOT, the city and multiple third-party stakeholders, including Denver Water and Union Pacific Railroad.

“Denver Water was a huge interface with us because there’s three water conduits that go north-south across the project,” says Jason Proskovec, Kiewit’s design-build manager on the project. “There’s 850 linear feet of utilities per acre, which in our world is kind of off the charts.”

He adds, “It’s been a huge success from a utility standpoint.” He credits CDOT’s initiative using ProStar Pointman software to help manage all data gathered from potholing, saying, “I can see exactly where all the utilities are in real time.”

Proskovec noted an added schedule benefit of the team’s “hefty level” of collaboration with Union Pacific Railroad, which ultimately “changed the track phasing to help save about five months on the schedule,” he says, even though track-phasing changes were originally off the table.

The KMP team also includes 27 different design firms led by WSP that are “co-locating with the contractor, the developer and owner. It’s been instrumental,” says Jason Buechler, design manager at WSP.

“Having all of these different stakeholders be part of the project goals has been key to success,” adds Proskovec.

The entire project scope is approximately 80% complete, according to Matt Sanman, public information officer for KMP. The widening of the five-mile-long east segment of the project is essentially done, except for installation of tolling equipment, signage and landscaping.

Completed activity along the 3.5-mile-long central segment includes construction of the inner lanes of I-70, new and relocated ramps, utilities installation and relocation along the north frontage road, and removal of the Denver Rock Island Railroad (DRIR) bridge as well as four I-70 bridges over cross streets.  New bridges have been built along outer lanes.

“Having all of these different stakeholders be part of the project goals has been key to success.”
— Jason Proskovec, Design-Build Manager, Kiewit

Additional ramp, bridge and street reconstructions, including the DRIR bridge, are continuing as portions of the highway are repaved. But the signature element of Central 70 is placement of the freeway cap and its four-acre park located in the 1.5-mile-long west segment that runs through the GES neighborhoods.

The cap’s 1,000-ft-wide, two-span structure is like a tunnel that required installation of life-safety systems, says Buechler. The cap supports two cross streets and the park, which includes a soccer field and playground used by Swansea Elementary students during school days as well as a small amphitheater, splash park and landscaped areas for community use when school is out.

Buechler says the cap also is one of the first road tunnels where the fixed firefighting system (FFFS) and ventilation system designs were fully integrated, allowing for a reduction in ventilation capacity because of mitigation provided by the FFFS.

“Bridge girders forming the tunnel roof were designed with fire-resistant concrete, eliminating fireproofing on the ceiling and minimizing future maintenance costs,” he says.

The tunnel’s active ventilation system includes eight fans (and one spare) on each side of the structure. Monitoring devices will activate an appropriate number of fans if certain emissions or smoke levels are reached.

Diverting freeway traffic below grade required the team to balance keeping the roadway surface out of the groundwater while maintaining sufficient vertical clearances for bridge crossings and the park.

“We basically built a bathtub,” says Hays, a solution that also presented stormwater challenges. Working with Jacobs as a subconsultant, the team devised a solution where runoff flows through trench drains to the low point, entering a lift station that pumps it 35 ft back up to grade.

Hays says this is a unique part of the system, which then transitions to a traditional water-quality pond before it’s discharged into conduits carrying it into the South Platte River.

A separate concrete storage tank was built adjacent to the pump station to accommodate the 3,500 gallons of water per minute that the deluge system would drop if triggered by a fire. This potentially contaminated water is diverted into a separate drainage system and tank until it can be tested and treated as necessary.

“It was very important to us that we made sure to keep those two water sources separate so that we don’t end up contaminating the Platte River,” Hays says. 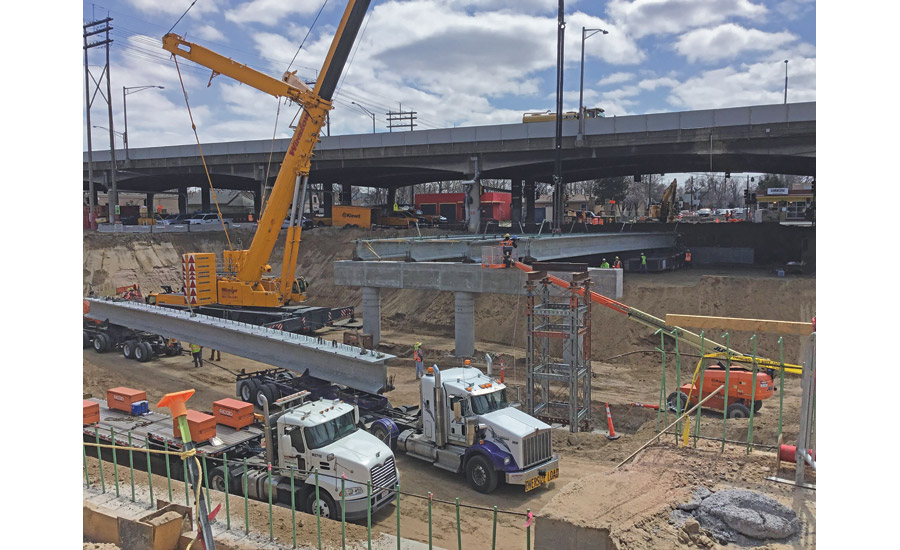 The project involves rebuilding many cross street intersections and bridges. A plan to communicate the impacts of construction activity to residents and businesses adjacent to the project was put in place early to ensure a seamless transition into construction operations.
Image courtesy of CDOT

CDOT celebrated what it called “The Mile High Shift” in May, diverting freeway traffic off the viaduct and into three lanes in each direction through the partially completed tunnel. This allowed Kiewit to begin self-performing the viaduct demolition as excavation for the tunnel’s eventual eastbound lanes continues. At completion, the tunnel will carry four lanes of traffic in each direction, including the new express lanes.

Hays says viaduct materials are being 100% recycled. The steel is melted down for reuse while the concrete is processed on site at a crushing yard at Quebec Street.

The concrete will be reused as new road base for the eventual eastbound lanes of I-70, with any excess available for other road projects.

With only a few portions of the viaduct left to be removed, progress on the project is much more visible. Hays says once the viaduct is finally down “it will be a fantastic improvement, not only for the commuters in Colorado but also for the neighborhoods.”

He expects the project to come in or under budget, noting good fortune so far when it comes to unforeseen conditions as well as the benefits from the P3 in refinancing some of the debt.

“It’s incredibly complex,” he says. “All aspects of it are complex, the community involvement, coordination with third parties, the number of utilities we’ve had to move, the way the public-private-partnership contract is laid out, all the way down to the engineering.”

He adds: “It’s a once-a-career-type project, and it is awesome to be a part of it.”