The 5.4-mile Interstate 30 project in central Arkansas widens the highway to six lanes from four, a $187-million undertaking that’s part of the 36 projects approved by voters back in 2012.

The Saline County project runs from State Route 70 and past State Route 67, crossing the Saline River Relief and Saline River to just east of the Sevier Street overpass in downtown Benton, the county seat 10 miles south of Little Rock. The original highway was constructed in 1957.

“This project is small in nature but complex in structure,” says Tony E. Evans, the district six construction engineer for ARDOT. “From one perspective, it’s more of a huge bridge job rather than a roadway job.”

Through a competitive bid process, the Arkansas Dept. of Transportation awarded the construction contract on Dec. 5, 2018, to Johnson Bros. Corp., a division of Southland Holdings, based in Grapevine, Texas.

The I-30 expansion is among the projects in 19 counties—approved by voters in November 2012—that comprise the 10-year Connecting Arkansas Program, funded by a half-cent sales tax to improve highways and highway bridges.

“This job is part of the continuing program to widen I-30,” Evans says. Four previous projects for widening I-30 to six lanes have been completed from Benton to Little Rock under previous bonding authorizations, he explains. 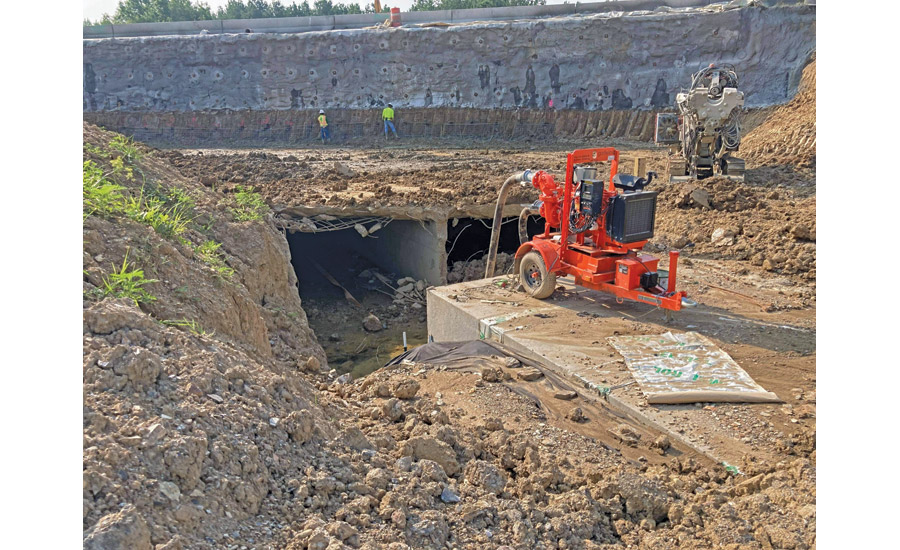 In the current project, Johnson Bros. will be expanding the roadway; reconstructing three interchanges at SR 67, SR 70 and South Street in Benton; and building 10 bridges. Those include four composite plate girder span unit bridges (1,133 ft total) above state highways 70 and 67; four continuous composite W-beam unit bridges over the Saline River Relief, a backwater off the river; an exit ramp to SR 67 and South Street above I-30 (1,849 ft total); and two plate girder/W beam hybrids bridging the Saline River (2,126 ft total).

Finally, a 60,000-ft barrier wall is being placed in the center roadway median and at frontage roads and ramps. The concrete roadway will be poured on a stone base.

Work began Feb. 7, 2019, and is expected to be complete Sept. 14, 2022, with incentives and penalties in place to ensure the team meets the target date.

“We’re about 40% complete and tracking a little ahead of schedule despite a number of challenges, especially labor,” says Ben Holt, project manager for Johnson Bros. The COVID-19 virus “has significantly challenged our workforce—every level from labor to machinery operators and superintendents,” he says. “It’s also impacted our subcontractors.” Factors affecting labor include the Centers for Disease Control’s masking, distancing and temperature-taking requirements. 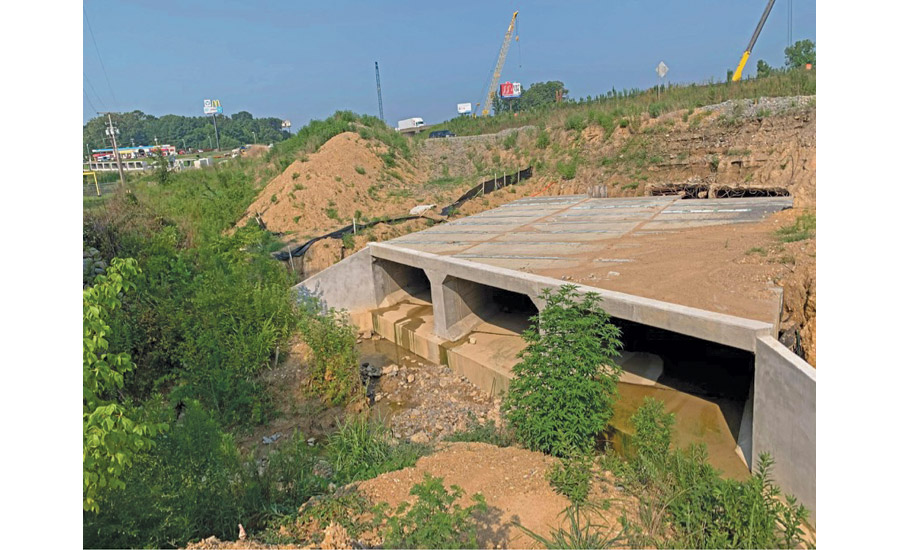 The new triple-barrel box culvert provides more flow for creek water. The crew also installed head and wing walls on both the north and south sides of the culvert.
Photo courtesy of Southland Holdings

Holt says that adding crews and scheduling five 10-hour shifts has helped the team maintain schedule. “COVID-19 impacts have been diminishing, but we are still experiencing labor shortages at all levels due to the current job market and the fear of infection,” he says.

Prior to the pandemic, the total number of Johnson Bros. workers had peaked at about 140. Post-pandemic, however, the company and its subcontractors have had difficulty recruiting labor, Holt says.

“This project is small in nature but complex in structure. From one perspective, it’s more of a huge bridge job rather than a roadway job.”
—Tony E. Evans, District Six Construction Engineer, ARDOT

He adds that some agencies and companies have been working remotely, but this has not been as effective as having them on site. “It’s better that some key people be here,” he says.

The pandemic has also affected materials availability. Steel has been procurable, although at a premium. But precast items such as drainage components have been delayed from the project’s Mississippi manufacturer. Holt notes, “Again, the situation is improving, but the delays in delivery have impacted us.”

ARDOT charged the Johnson Bros. team with maintaining continuous traffic flow both eastbound and westbound. The project has mandated detours for oversized loads and scheduled normal traffic detours as necessary and night lane closures for staged construction or maintenance such as patching potholes.
The requirement to keep I-30 open particularly affected one installation: a triple 11-ft by 6-ft skewed reinforced concrete box culvert extending north and south under the SR 67 interchange. Carrying creek water, the culvert replaces a smaller double-barrel one and comprises three rectangular barrels in one concrete structure to accommodate more flow, Holt says. He explains the triple culvert is “skewed” because it runs diagonally under I-30 rather than perpendicular to it.

One challenge is that it’s a large culvert, Holt says, adding that “because we have had to maintain traffic flow, we have had disconnected stages of removal and construction.”

Maintaining adequate flow of the water in the creek during removal and construction is also a major obstacle, Holt says. He notes that these issues “significantly extend the duration of the work by several months form what would be anticipated under less complex circumstances.”

The 5.4-mile I-30 Saline project extends from SR 70 to South Street in Benton.
Map courtesy of ARDOT

Since the beginning of the project, the team has encountered inconsistent, unstable soil conditions. “We have discovered all types of dirt, clay, shale and sandy gravel that retains a significant amount of water year-round,” Holt says, noting that these conditions were evidently anticipated because cement soil stabilization was set up as a bid item in the contract.

He adds that when the required density and stabilization cannot be attained using conventional methods, ARDOT directs that the area be stabilized by mixing cement into the subgrade.

Excessive rainfall in 2019 from Tropical Storm Cristobol in June and Hurricane Barry in July created challenging work conditions and unexpected downtime, and the winter storm of February 2021 brought 20 in. to 24 in. of snowfall to the project, causing a delay of several weeks. And with the installation of drainage pipe and structures, numerous utility conflicts have had to be resolved.

A roundabout on the northeast corner of the South Street interchange, which connects with the frontage road adjacent to I-30, is also being added.

“Roundabouts have been trending in our towns and cities,” Evans says. They provide needed traffic signals and also cut down on T-bone collisions. This one is designed to relieve congestion in the area,” he explains.

As part of a plan to maintain traffic approved by ARDOT, Johnson Bros. also constructed a temporary 120-ft Acrow bridge north of and parallel to the original westbound bridge above SR 67 as well as a temporary roadway for westbound traffic. 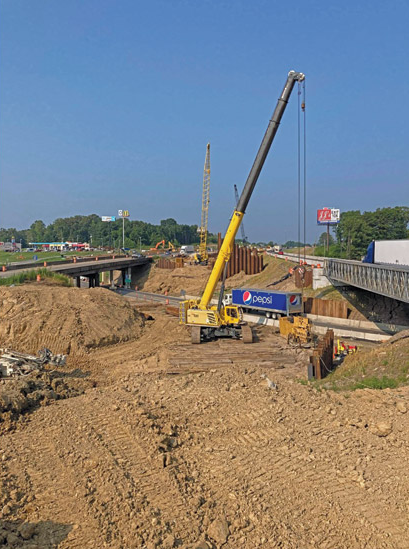 An Acrow temporary bridge, such as the one pictured at right, has helped the Johnson Bros. team efficiently demolish old bridges and build new ones while maintaining both eastbound and westbound I-30 traffic.
Photo courtesy of Southland Holdings

As suggested by Johnson Bros. and approved by ARDOT, the traffic plan includes a temporary roadway from the Acrow bridge that detours westbound traffic around the immediate construction zone.

This “eliminated the need for staged construction,” Holt says. “Another benefit is that it also reduced the safety hazards of traveling and working in the middle of staged bridge construction zones.”

The mussel beds near the new westbound Saline River Bridge are another area of concern.

“Working near the Saline River can be challenging, an area which is environmentally protected” due to the protected shellfish, Evans explains. Adds Holt, “We didn’t have to relocate any, but we were cognizant of their existence and have kept our activity away from them.”

Leonardo Electronics US to Build Semiconductor Manufacturing Facility Near Tucson

ARTBA's Ruane to Retire in Oct. after 30 Years as CEO