When developers attempted to convert a 200-acre defunct golf course in Houston into a commercial development, various groups coalesced with another idea: to turn the vast acreage into something more green and sustainable. Although this phased project is not yet complete, it has already proved its value by saving 400 houses during flooding caused by Hurricane Harvey.

The Clear Lake City Water Authority (CLCWA), which owns the property, first held five town hall community meetings to determine what other multipurpose ideas neighbors would suggest for the space. After narrowing down community responses, the decision was made to transform this massive parcel of land into Exploration Green, a storm retention system and recreational green space for 40,000 local residents.

The total cost of the project is approximately $41.7 million across five phases. The first phase of the design-bid-build project began construction in 2015. Despite the more recent challenges of the global pandemic, the project has forged ahead, on schedule. The team has also started installing plantings and performing maintenance work on the project’s already completed phases.

Not only will Exploration Green serve as a storm retention system equipped with detention ponds that hold 100 million gallons of water, it will boast 105 acres of natural habitat with wetlands and native grassland areas. It will also be equipped with 12 miles of walking trails, two athletic fields and will be home to more than 1,000 native species. 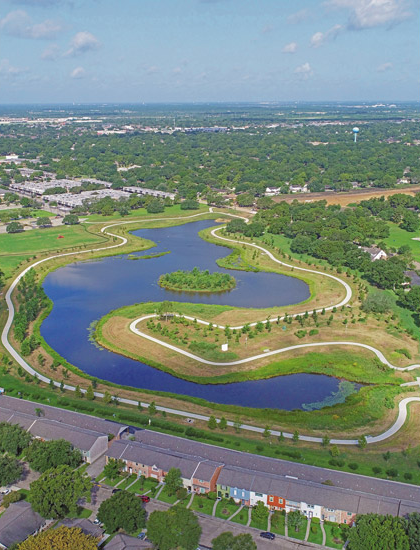 When all five phases are complete, Exploration Green will protect more than 2,000 homes in the Clear Lake community, and Clear Lake City will have an overall storage capacity of half a billion gallons of water, the equivalent of 750 Olympic-size swimming pools.
Photo courtesy of Lockwood, Andrews & NewNam Inc.

Construction began on Phase 4 in July 2020 and will reach substantial completion in September. Serco Construction Group Ltd. served as general contractor on Phases 3A and 4. Paskey Inc. led Phase 1A; Lecon Inc. ran Phase 1B and 1C; and Triple B Services LLP ran Phase 2. Phase 3B is still up for bid, as is the final Phase 5. The entire project is slated for completion in 2022.

“The land exists in the middle of a subdivision with numerous homes lining the site and 40,000 residents in the surrounding Clear Lake area. This is a suburban neighborhood. [The retention system] is not what they’re used to seeing. Residents, many of them long-term neighbors, have lived in these homes for more than 40 years,” says Jennifer Morrow, general manager at CLCWA, which serves as the local provider of water, sewage collection and treatment as well as storm drainage services.

“It was concerning for them,” adds Kelly Shipley, an associate and team leader at Houston-based Lockwood, Andrews & Newnam Inc. (LAN), the project’s design engineer. “They didn’t want to see an increase in pedestrian traffic behind their homes or for certain trees to go away.”

Part of what makes this project unique is its sheer size, especially considering most storm detention systems are built on a smaller scale. Exploration Green is about 200 acres, so minimizing construction impact was extremely important—from reducing vehicle noise to maintaining drainage patterns to prevent neighborhood flooding.

“We restricted work hours, required the contractor to turn off all vehicles and equipment until they were permitted to start,” says Shipley. “The contractor was allowed to be on site at 8 a.m. Vehicles and equipment could not turn on until 8:30 a.m. Additionally, we reduced the frequency of trucks taking a certain route through the neighborhood by splitting the haul route to cut down on traffic noise caused by the trucks.” 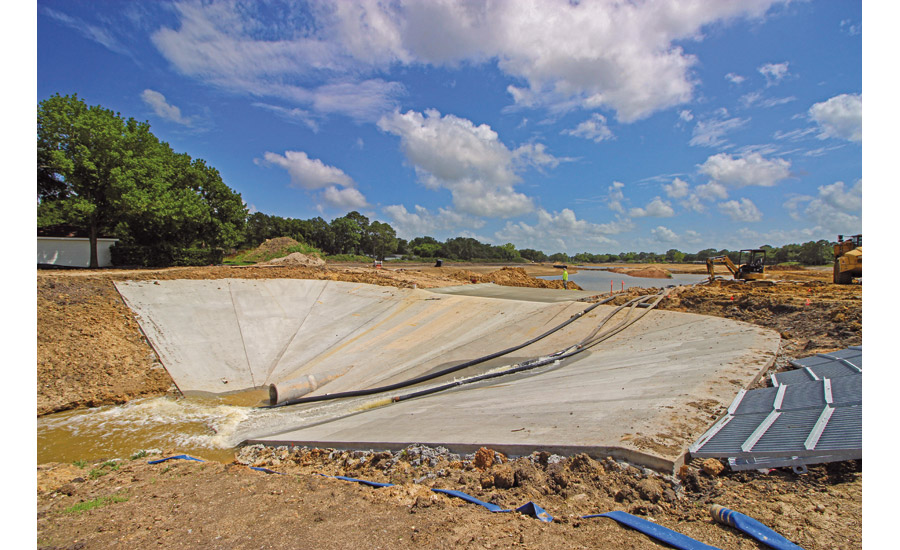 Working with and against Nature

Despite initial community pushback and pandemic challenges, Exploration Green is within budget and ahead of schedule. Originally, the expectation was that the project would take 20 years. It’s on track to be done in seven.

“During the construction of Phase 1, we were about 80% complete when Hurricane Harvey happened,” Shipley says. Phase 1 features a 23.7-acre detention pond, 15.2 acres of natural habitat with wetlands and 1.25 miles of hiking and bike trails. It also includes 115 acre-ft of detention storage.

“The neighbors saw how well it performed. It protected 400 homes during Harvey. They saw the value it’s bringing to the community. The board accelerated the project, and now we’re doing one phase per year,” Shipley says. 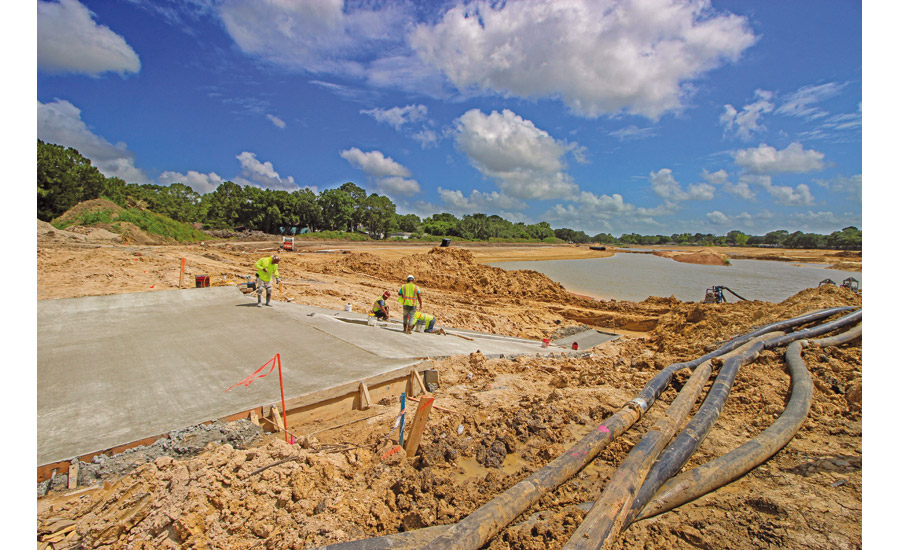 View of the upstream side of the outfall structure.
Photo courtesy of Lockwood, Andrews & NewNam Inc.

When all five phases are completed in 2022, Exploration Green is expected to protect up to 3,000 homes.

Another priority for the project team involved protecting pedestrians on surrounding streets that connect multiple grade schools to the surrounding subdivision.
“Most of the kids walk to school and walk across our path and have access into the site. We have police officers on school days that help control that traffic,” Shipley says.

With an overall project scope that includes five massive detention ponds and 105 acres of natural habitat with wetlands and native grassland areas, design modifications in the field during construction were frequent. With multiple parties involved, design fluidity is a necessity when accommodating many moving parts, Kelly says.

In terms of construction materials, the team is mainly extracting, not adding. “There’s so much dirt that we’re removing. A challenge is figuring out what we’re going to do with that much dirt? How will we get it from the project site? How will it impact the community?” Kelly said.

The Serco team first looked to see if any of the immediate neighbors or businesses needed some of this dirt in order to limit the distance trucks would have to travel while hauling, says Ronald Conaway, Gulf Coast regional district manager at Serco. “If there are no immediate neighbors or businesses, we will then reach out to other entities, such as the city of Houston, for dump sites.” 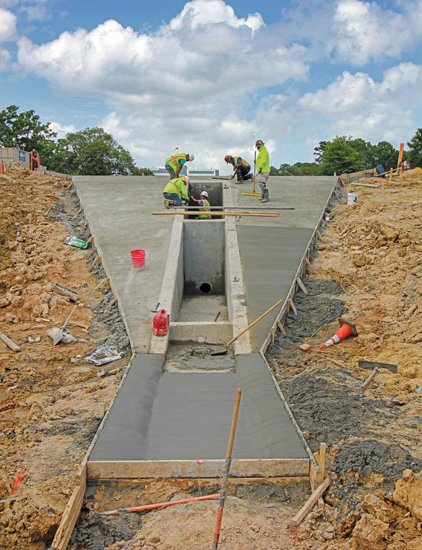 The concrete outfall structure has three walls that separate the two-year, 10-year and 100-year storm restriction pipes. A floatable collection screen will be placed over the opening.
Photo courtesy of Lockwood, Andrews & NewNam Inc.

There is a preselected haul route for the trucks entering and exiting the site, Conaway adds. “This haul route was originally selected through discussions with Clear Lake in efforts to limit the impact to the community. Even after the start of construction, adjustments to the haul route were made to benefit the community,” he says.

Another hurdle had to be cleared when a deadly winter storm plowed through Houston in February 2021.

“Most of Texas was without power for a week,” says Shipley, the team leader at LAN. “It affected supply chain when it comes to pipe materials. We started hearing from our manufacturers that they’re not doing purple pipes.”

The project team is utilizing the reclaimed water line and the reclaimed water discharge to irrigate and maintain the normal water surface elevation in the ponds, explains LAN project manager Kenrick Piercy. “Each pond has purple HDPE irrigation pipe that runs a loop around the pond. One of the TCEQ requirements is the pipe must be purple to indicate reclaimed water and that the water is non-potable,” he says.

“As of now, Serco has not mentioned any issues with supply of purple pipe,” Piercy says.

Exploration Green Conservancy, one of the main partners involved in the project, required that native vegetation, trees and wildflowers be used. But the native grass grows unusually tall.

Morrow recalls, “As one of our board members said, ‘We want to be able to hide bunnies, not buffalo!’” Creating a custom seed mix and determining the best method for the contractor to use it required constant coordination. “We’ve moved to a custom grass that’s right for each season and grows to the right height,” Morrow says.

As part of the project’s sustainability goals, wetlands were added into the project design to improve storm water quality runoff. The wetlands naturally treat contaminated stormwater and prevent pollutants from reaching other waterways and the local community.

“Texas A&M AgriLife comes in and manages the nursery and the planting and maintaining wetlands,” Morrow continues. “It brings in all kind of wildlife. We have fish and turtles, 400 species of birds, plants and reptiles.”

While there have been reportedly no safety issues or a lack of trained workers on the job, according to the project leaders, the final phase is expected to be the biggest hurdle. It’s also the largest phase.

“It will be the most challenging because it is the largest of the ponds to be excavated for one project,” Shipley says. “It also has a gas pipeline that runs through the site that we’ve had to work with the gas company to relocate so we could maintain the planned volume of the pond.”

Exploration Green won’t create a lot of jobs in the community, but it will offer plenty of room for volunteers who want to get their hands dirty and engage with the outdoors. The project will also allow for plenty of sports, outdoor exercise and community engagement.

Supporting groups are making the project possible, with funding from Texas Parks and Wildlife, the city, state and county. Trees for Houston donated 5,000 trees, with 1,300 trees planted mainly by volunteers. And over the last six years, the Exploration Green Conservancy is nearing 25,000 volunteer hours so far.

Eva Fedderly covers architecture, design, and social justice for ENR and Architectural Digest. Fedderly is currently writing about a book about New York City’s landmark decision to close Rikers Island. She is a graduate of Cal Berkeley and Harvard University. Follow her on Twitter @EvaFedderly.