This website requires certain cookies to work and uses other cookies to help you have the best experience. By visiting this website, certain cookies have already been set, which you may delete and block. By closing this message or continuing to use our site, you agree to the use of cookies. Visit our updated privacy and cookie policy to learn more.
Home » West Quarter Development Will Connect Salt Lake City’s Downtown Districts
Mountain StatesMountain States Construction Projects

Of the numerous hotel and residential projects underway in downtown Salt Lake City, few have had the ambitious goals of the West Quarter, now in its first phase. The 6.5-acre site is located on what is known as Block 67, which is between the central business district, with its high-rise offices and the City Creek retail center, and what could be called the city’s entertainment district, dominated by the Vivint Smart Home Arena, which hosts concerts and Utah Jazz games, and the Gateway mixed-use development farther to the west. Ritchie Group, the West Quarter developer, sees the development as a long-missing link between the two districts.

“We see this as support infrastructure,” says Ryan Ritchie, a partner in the Ritchie Group. “The connectivity between the Vivint arena and Gateway and the Convention Center was very poor, but breaking down this block and making it more pedestrian friendly, we think, will be a great benefit to the whole area.”

Jacobsen Construction won a CM/GC contract to build the $135-million first phase, which got underway in spring 2020. Constructed of post-tensioned concrete, it includes two levels of below-grade parking with an 11-story hotel tower to the south and an 11-story residential tower to the north, separated by a pedestrian-oriented plaza. The 270-room hotel will be split between two Marriott-branded hotels, the luxury LeMeridian and the extended-stay Element. 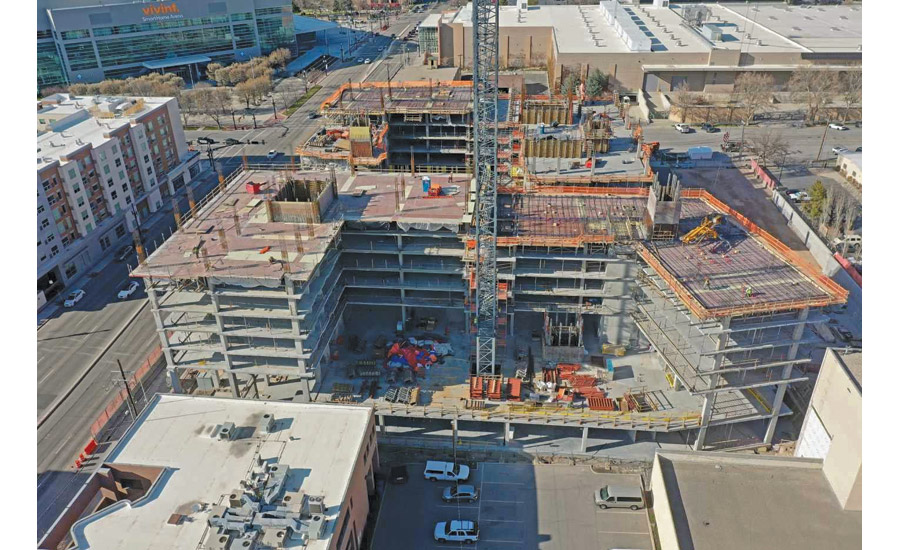 ROCK SOLID Both structures rising on the site are being constructed of post-tensioned concrete above two levels of underground parking.
Photo courtesy of Jacobsen Construction

Architect Emir Tursic with the Salt Lake City office of HKS Inc.—which designed the 203,800-sq-ft hotel with California-based Studio HBA doing the interior design—says accommodations for each brand will differ but they will share amenities and back-of-house operations.

The paseo breaks up the space in the large block, typical of Salt Lake City, with no curbs and bollards separating traffic from pedestrians. The plaza will be permeable and oriented to walking, Tursic says. “We can also close it off for special events,” he adds. 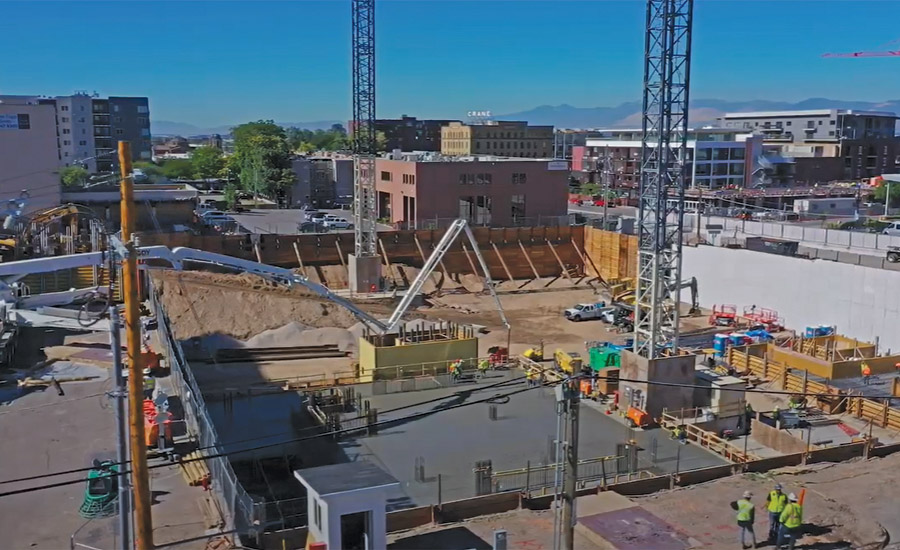 PARKING BELOW A parking garage extends under the entire footprint of the two buildings and the midblock pedestrian paseo.
Photo courtesy of Jacobsen Construction 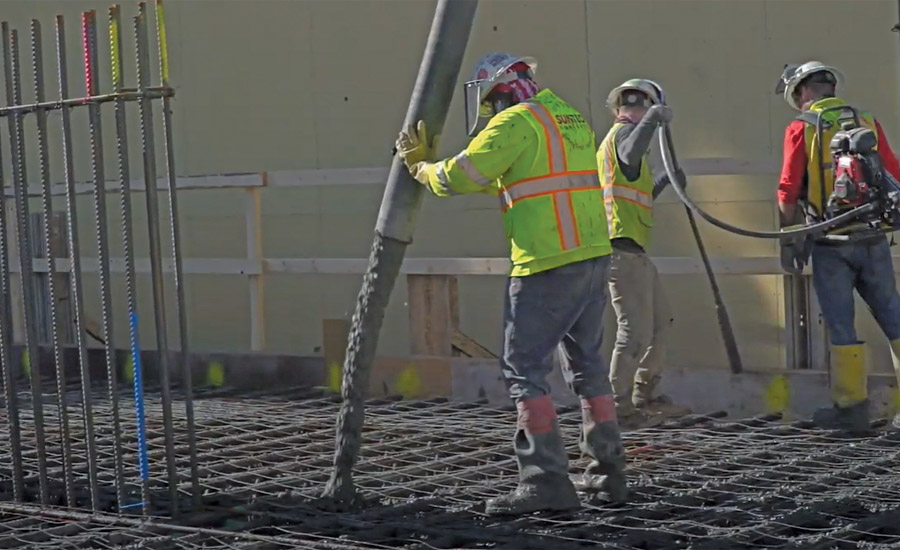 In addition to providing ample programming space inside, Tursic says the concrete structure is conducive to the modern finishes that will be used inside while recalling the area’s history as a warehouse district.

“We liked the idea of this being part of an older warehouse district, so the concrete construction fit with that,” he says. “We are also using a brick veneer that will bring some brightness, and then we’ll use some cedar siding to soften the look on the ground level.” 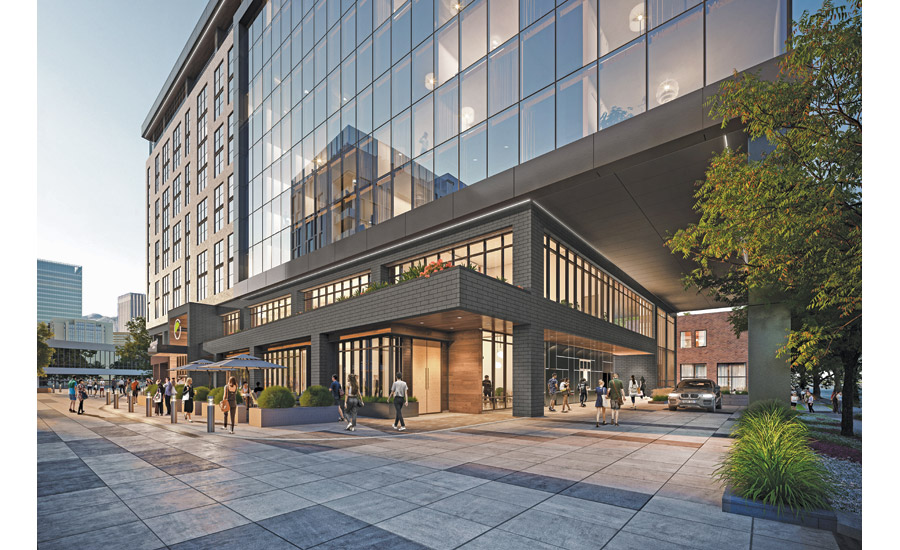 STREET LIFE The two hotels will have separate lobbies with restaurants to provide more dining options for guests and people attending events at the Vivint arena across the street.
Image courtesy HKS

“The Vivint arena has around 200 events a year, and we will have this space here to support them and to welcome people before and after games or concerts,” Ritchie says.

The 229,540-sq-ft, 230-unit residential tower was designed by Salt Lake City-based Architectural Nexus, which also did the master planning for the site.

“These will be high-end, market-rate units,” says David Abraham, principal and project architect with Architectural Nexus. “We have the pool on the top level, which was not a problem with the concrete construction, and we have another roof deck element on Level 6. The fitness center will open to a green roof outside and will really allow that space to open up for more uses.” 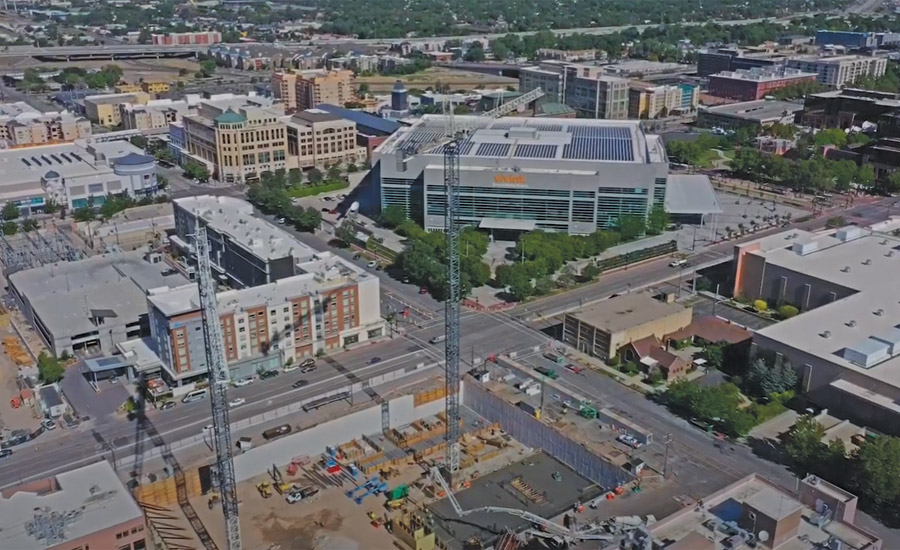 CONNECTOR Developers of the West Quarter see it connecting the central business district to the east with the entertainment spaces to the west, such as the Vivint Smart Home Arena seen at the upper right and the Gateway district beyond it at top left.
Image courtesy of Jacobsen Construction

Ritchie says unlike most of the podium-type buildings going up around the city, the team opted for post-tensioned concrete for both buildings as the best method to get the interior programming space they wanted.

“For the size of these buildings, post-tensioning offers a tremendous amount of benefits,” says the project’s structural engineer Paul Feather of Montana-based SE Solutions.

“It allows thinner slabs, which means lighter columns, lighter shear walls; it just lightens up the whole construction. You have shallow floor-to-ceiling heights and so that reduces the amount of facade. Every foot of facade you can take off one of these, it saves you money,” he says.

Suntec, Jacobsen’s affiliated concrete subcontractor, is performing the concrete work. According to Jacobsen project manager Tony Castillo, one of the greatest challenges for the building team has come from inconsistent concrete supplies.

“There was a fly-ash shortage in the winter, and now there is a shortage of cement powder,” Castillo says. “We went down to pouring just four days a week. Our team has been great at coordinating work, and we are still looking at topping off in mid-June for the hotel and then the residential tower in July.”

Fortunately, there was plenty of concrete ready early in the project, Castillo says.

“One of our first pours was for the footings and for the parking garage. We had a continuous pour of 2,600 cubic yards of concrete that started early on a Sunday morning, went all night and ended early Monday,” he says.

The two levels of underground parking are designed to be extended under future phases if necessary, Feather says.

Ritchie says there are no plans for that yet, but a parking terrace is planned for the next phase. The two levels of underground parking in the current project were made possible by negotiations with the city. The Salt Lake City Redevelopment Agency designated the block as a Community Reinvestment Area, opening the door for loans that offset the cost of the parking garage. Ritchie says a loan of $15 million ultimately came from the state transportation fund and will be repaid in increments by taxes generated from the hotel and the residential tower. 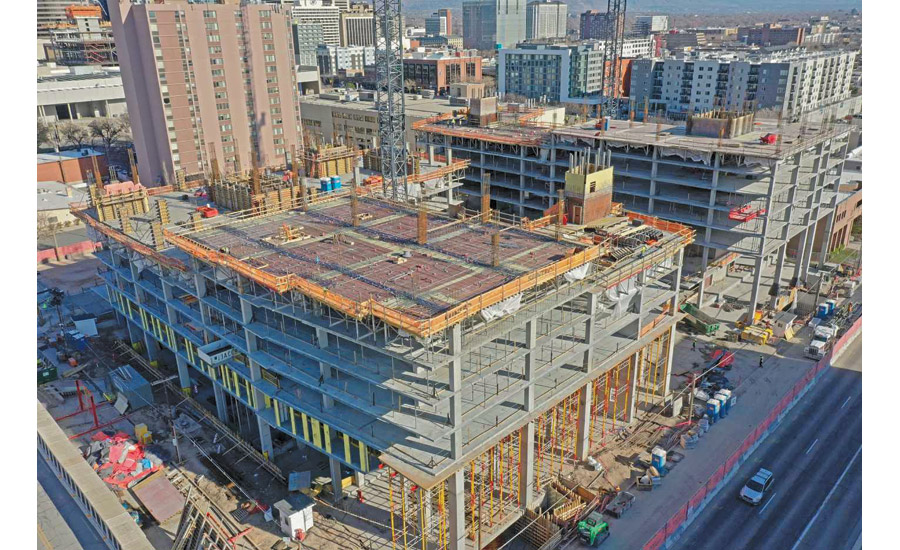 CONCRETE SOLUTION Using posttensioned concrete was the answer to getting the internal programming space the owners were looking for. The material will also complement the high-end finishes planned for both buildings.
Image courtesy of Jacobsen Construction

“Without that level of public cooperation, we couldn’t have built the underground garage. It would have been too expensive,” Ritchie says.

The West Quarter development is adjacent to a block that includes the Salt Lake Buddhist Temple as well as several historic buildings that once housed Japanese-owned businesses. Plans are underway to redevelop the area, highlighting its history. Ritchie says the Community Reinvestment Area designation will eventually benefit that project as well.

Future phases will include two more residential towers, one with below market-rate units. There will also be a 25-story office tower, possibly another hotel, and more ground-level space for retail and restaurants as well as a grocery store, Ritchie says.

Despite an episode of hurricane-force microburst winds that blew through the Salt Lake Valley in September, and then a jolt from a 5.7-magnitude earthquake in March while the site was being excavated, the building team has managed to stay on schedule, Castillo says.

“COVID restrictions were not too challenging for us. With the post-tensioned build, we don’t have as many tradespeople on site as we would otherwise,” Castillo says. He adds that the team had been able to take advantage of the decrease in traffic as offices shut down during the COVID-19 restrictions and allowed the building team to temporarily close one lane of traffic next to the site, giving crews more open working space and allowing easier access for concrete deliveries.

The project is slated to open in the summer of 2022.