This website requires certain cookies to work and uses other cookies to help you have the best experience. By visiting this website, certain cookies have already been set, which you may delete and block. By closing this message or continuing to use our site, you agree to the use of cookies. Visit our updated privacy and cookie policy to learn more.
Home » Being Innovative and Nimble Propels Syska Hennessy to ENR NY Design Firm of the Year
New YorkNew York Construction Companies

The senior principal and leader of the city-based engineering firm’s health care group met with hospital officials, architects and other team members the next day to hammer out a plan to repurpose 26,000 sq ft of nurses’ residences. “None of the stuff we have now was in place,” says Krawetz. “No masks, no social distancing. There were lots of people in the conference room, and you could feel the tension in the air.”

A few days later, the project nearly tripled to 72,000 sq ft over three-plus floors. Such a project would normally take six months to design and up to a year to build, Krawetz says. Syska had about six weeks. The health care team delivered 102 drawings over 20 days. “We were flying,” he says. Forty-five days later, the team started handing over the new ICU space, with the entire project wrapped up on June 2. Syska took on other COVID-19-related projects as well, including Bergen New Bridge Medical Center in Paramus, N.J., Mount Sinai Hospital in New York City and New Hanover Regional Medical Center in Wilmington, N.C.

The firm’s quick response to the Bronx hospital’s bed shortage was no accident. Since its founding in 1928 by Adolph G. Syska and John F. Hennessy, Syska has played a prominent role in health care design. In 1997, the firm helped build New York-Presbyterian’s Greenberg Pavilion, an 11-story hospital on a platform over the FDR Drive. Twenty years later, Syska helped build the same hospital’s $1.5-billion David H. Koch Center for ambulatory care.

With almost 500 employees in 16 U.S. offices as well as branches in Dubai and Shanghai, Syska can tap into expertise worldwide at times of crisis. The global engineering firm’s scope now extends far beyond its MEP roots, and its strategic decisions over the past decade helped it meet the most daunting challenges. Syska’s flexibility, innovation, commitment to diversity and high-profile projects have won the company recognition as ENR New York’s Design Firm of the Year.

“Just from talking to people inside the engineering community or in the client arena, you mention the name Syska and their eyes light up,” says Jay Simson, New York CEO of the American Council of Engineering Companies.

Syska thrived under three generations of family ownership and is now led by Gary Brennen and Cyrus Izzo, non-family co-presidents. Mechanical engineer John F. Hennessy III, grandson of the firm’s co-founder, served as chairman and CEO from 1989 to 2004 and grew the firm into new markets in the U.S. and globally. He died Feb. 21 after a long illness at age 65.

The firm rebranded itself in the early 2000s as an engineering, information and communication technology, and commissioning firm. In 2015, Syska established a 10-year plan focused on client service, learning and development, operational efficiency and financial results. “When the pandemic hit, we believe that was the foundation that carried us through in such a strong way,” says Izzo, who joined the firm in 1993. “It helped pilot us through a really turbulent time.”

Even before the pandemic, Syska’s leadership was able to produce a 21% increase in revenue to $39.8 million in 2020 over the prior year from work in New York and New Jersey. Beyond Syska’s health care work, the firm continues with successful projects such as last year’s Long Beach Civic Center in Long Beach, Calif., and offices for investment firm BlackRock Inc. at 50 Hudson Yards—a project aiming for LEED Platinum certification and that reportedly drew $25 million in state tax credits to keep its offices in the city.

Robert Ioanna, Syska senior principal and leader of its New York City office, points to the firm’s nimbleness as key. During the Great Recession, Syska pivoted to conducting due diligence and helping clients downsize and repurpose their spaces. Its leaders also sought out more government work and took advantage of a suddenly hot data center market. That light industrial expertise came in handy early in the pandemic when internet usage exploded and Syska built hundreds of millions of dollars of in-place construction, mostly in the U.S., over eight to 10 months, says Izzo.

To keep revenue flowing during the pandemic, Syska also hosted webinars and expanded consulting services, especially on indoor air quality. The firm continued work on large projects such as the redevelopment of JFK Airport’s Terminal 1, until that project was put on pause in July 2020. 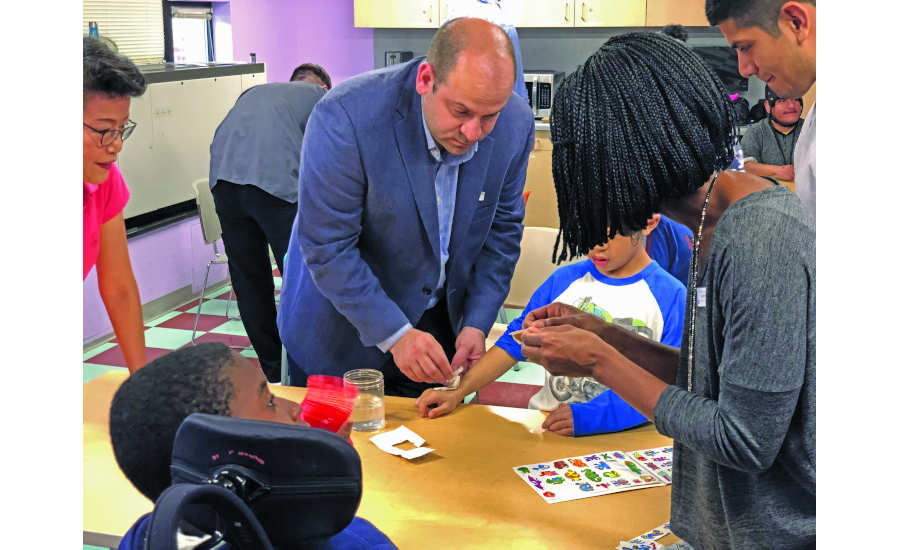 Robert Ioanna, Syska senior principal and leader of its New York City office, participates in the firm’s community outreach program with patients at a city hospital.

By the time Syska received the call to help build North Central Bronx’s ICU beds, the firm was well positioned to help. “We invested heavily in a technology platform so we can work seamlessly together in different offices,” Ioanna says. “So when it came time to be remote, we really didn’t have to change a lot of our practices.”

Syska needed every advantage. When the scope of the Bronx hospital project tripled early in the pandemic, Krawetz grabbed eight to 10 people from another hospital project on hold. An architect at the initial project meeting tested positive for COVID-19, and Krawetz had to self-quarantine for two weeks.

The project’s biggest challenge was replacing the floors’ air-handling units designed in 1974 and sized for residential occupancy, Krawetz says. Custom-size units were required to fit the space. While most hospital floors contain steel columns supporting the concrete deck, the North Bronx space was all concrete. This forced Syska to use existing openings for ductwork rather than cut larger ones, so the team increased fan motor sizes to help push enough air through.

Syska was also the MEP engineer for the new Long Beach, Calif. civic center, a 22-acre complex with a new city hall, library and Port of Long Beach headquarters. Finished in 2019, the $520-million project is among the largest completed U.S. municipal buildings done through a public-private partnership. Syska worked on the design-build project with Clark Construction and SOM for owner Plenary Properties Long Beach LLC.

“Syska was there from the very beginning. They were critical,” says SOM design partner Paul Danna. “They were always challenging us and bringing new ideas.”

One project challenge was minimizing the size of the mechanical systems and keeping any units off the roof, says SOM managing director Jed Zimmerman. Syska team members constantly tested theories and found new ways to achieve this, such as placing custom-designed units on every third floor rather than standard units on each floor. Syska was also instrumental in raising the buildings’ access floors to eliminate overhead ducts and helping SOM understand the benefits of orienting the complex’s main buildings to receive the optimal amount of sunlight and shade.

“We work with a lot of great engineers who understand engineering. What is unique and valued by us about working with Syska is not only the firm’s ability and expertise, but also its understanding of how all the surrounding issues and trades and partners are affected at the same time: cost, constructibility, life cycle, aesthetics,” Danna says. “As well as being precise thinkers, they’re quite broad in their thoughts.” 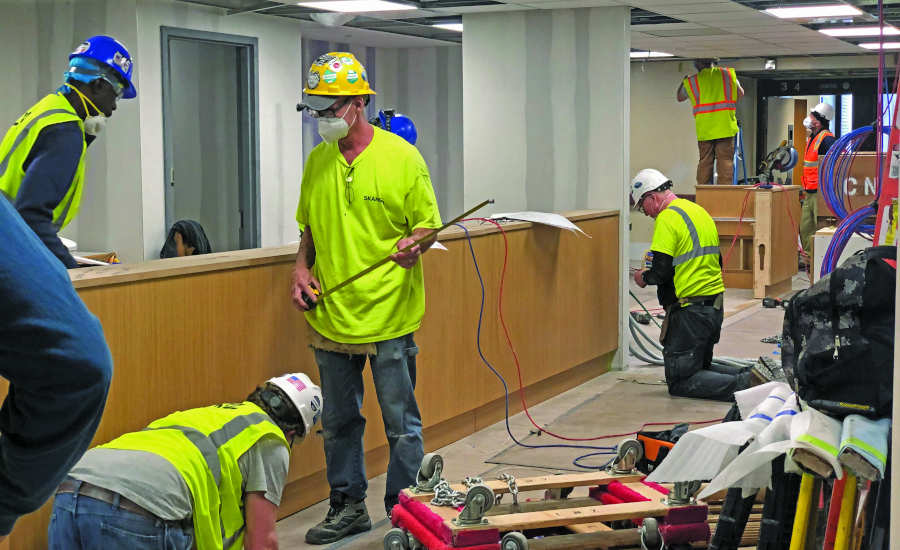 Such holistic thinking extends to Syska’s own house, especially on the topic of diversity. In 2016, Syska developed employee-run Syska Hennessy Advocating Professional Equality (SHAPE) to help the firm meet its diversity goals in a 10-year plan.

These efforts include unconscious bias training for all employees as well as for the board and hosting panels with partners such as Gensler, Izzo says. Before the pandemic, Syska hosted an international food day, a virtual event involving all of the offices during which employees shared various cuisines.

A key driver was the firm’s HR department. “We said, ‘Let’s rip apart our whole recruiting process from beginning to end and let’s figure out what we can do differently,’” Izzo says. A crucial step, managers found, was to increase the diversity of the firm’s interview panels.

Syska also boosted the number of volunteers to the ACE mentor program in high schools and doubled down on the Exploring program in New York City, an outpost of the Boy Scouts of America. “We were having so many conversations internally that we realized this has to go external,” Izzo says. “How can we be a driver of change with diversity, equality and inclusion?” The firm also partnered with ACEC, the Society of Women Engineers, Society of Hispanic Professional Engineers and National Society of Black Engineers.

“We’re just scraping the surface,” Izzo says. “There’s so much more work to be done.”

An important part of Syska’s future is its subsidiary Syska Innovations, created 18 months ago. As team members develop and adopt new practices and technologies, they seek ways to share their progress. “We want to change the industry, too. We don’t want to keep this all bottled up within our four walls,” Izzo says.

Syska Innovations has invested in a range of startups and often pilots new practices and technologies in its own projects, Izzo says. The firm is also a founding member of AEC Angels with other New York companies and an active investor in Shadow Ventures. One key firm issue now is energy efficiency, says Ioanna, with Syska supporting the city’s Climate Mobilization Act to reduce greenhouse gas emissions 80% by 2050. “It’s always been something we’ve done in our designs,” he says. “Now we have a tangible goal, a tangible limit to design against, and it’s something we were strongly advocating for.”

To that end, Syska often introduces fresh ideas and systems to projects, Ioanna says. Three years ago, it began developing a new HVAC solution for a financial client that used two parallel chilled-water systems, one to manage humidity and the other to provide a comfortable temperature. Most HVAC systems manage a building’s humidity and air temperature with a single system, which is much less precise and efficient. The team coupled the dual system with an underfloor air distribution system.