Paul Santo and Lou Milito are giving a whirlwind tour of Coordinated Metals Inc.’s 36,000-sq-ft shop while workers fold, punch, notch, etch or otherwise manipulate materials to create ornamental metal for some of New York City’s biggest projects. There are four fabricating crews on the floor. A vast array of multiple stock sheets are stored in back: bronze, stainless steel, aluminum. The pair show off their prize CNC milling machine that can handle material more than 20 ft long, and which automatically keeps its blades cold so that they stay sharp. They explain the importance of knowing exact tensile strength so that metal doesn’t “banana,” i.e. bend from being worked incorrectly. And when it comes to the finished products, says shop foreman Milito: “We don’t trust adhesives—it’s all fastened.”

If the visit to CMI’s Carlstadt, N.J., shop and office seems like a master class in metalwork, then vice president Paul Santo—who runs the company with president Frank Grippi and chief financial officer Scott Eisenberger—is its professor. Santo worked his way up from CMI’s shop floor starting in 1985, and even now he walks the floor every night to make sure everything’s tidy and in place. CMI has come a long way from its 1974 beginning as a vendor working on small partition storefronts to helping design “flagship jobs” around NYC, as Emad Lotfalla of client Related Cos. put it.

“We can take the vision of the architect and pretty much make it reality,” Santo says.

The ENR New York Specialty Contractor of the Year has seen its revenue rise steadily, to $21.2 million in 2018 from $20.47 million in 2017; it reported $20.42 million in 2016. Eisenberger credits this partly to competitive architects who “are trying to one-up each other so the designs are more elaborate.”

Indeed, CMI upgraded its shop to accommodate clients’ more complex, higher value project demands. Its 36,000-sq-ft plant has two power brake presses at 12-ft and 14-ft capacity with matching shears, welding and polishing capabilities, as well as other related metal working equipment to make products out of stainless steel, bronze and aluminum, along with related glass and glazing. They may be massive, but they’re also delicate and require fine precision to pull off. 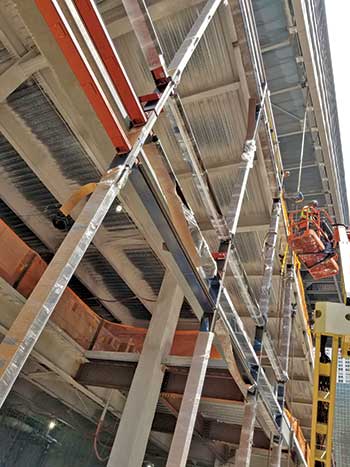 One Vanderbilt is CMI’s largest project to break ground in 2018. The company is fabricating 14-in. mullions for the Manhattan building.
Photo Courtesy Coordinated Metals Inc.

“We make giant mullions that weigh 2,000 pounds, but have to be treated like a watch,” Milito says.

The firm’s largest project completed in 2018 is the Hudson Yards retail podium, a contract worth $8.2 million. Its largest regional project that broke ground was One Vanderbilt, an $18.2-million contract. But the firm’s custom work on major projects has been going on for a long time. 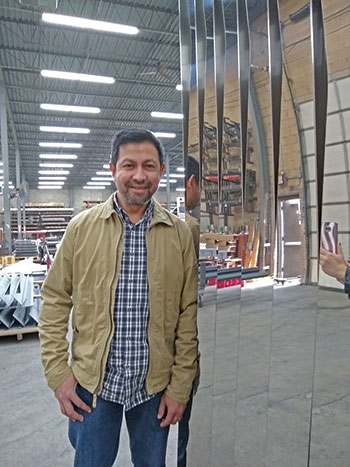 CMI is fabricating specialty steel panels for the observation deck at 30 Hudson—part of the Hudson Yards development— that will reflect the city skyline, says engineering manager Ysmael Goduco. Photo by Eydie Cubarrubia/enr

“By offering complete contract responsibility—engineering, shop fabrication and field installation—locally under one roof, CMI was able to [win] … contracts for major projects in NYC such as the Grand Central Terminal Restoration, Rockefeller Center Concourse and Retail Restoration, the Time Warner Center and the Hearst Building,” Grippi says. He adds that CADD software and new equipment—Santo notes that the company usually upgrades at least one piece of equipment each year—helps CMI “competitively perform more specialized monumental work on projects.”

One of the most impressive projects was at the Hudson Yards retail podium, which has a smoke evacuation system whereby glass on the building’s front doorways open up like hatches—24 operable framing units above the vestibule entrance that weigh about 800 lb each, using two 1500 psi low pressure hydraulic cylinders per unit to push them up simultaneously—and work with a fan on the roof to suck smoke out of the building. CMI engineered and designed the whole thing. 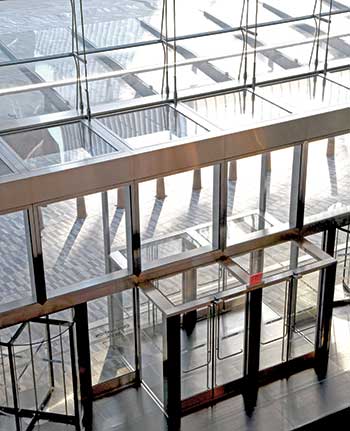 In case of fire, glass at the doorway of the Hudson Yards retail podium will open outward like hatches to let out the smoke.
Photo by Steven Von Ohlen, Courtesy Coordinated Metals Inc.

“We built it here in our shop,” says engineering manager Ysmael Goduco. CMI created a full mock-up of one bay in its shop to show to developer Related Cos., then tweaked it as needed. Goduco says he proudly took his wife to the Hudson Yards shops so that she could understand what he’d been working on.

“People don’t really see what’s behind these things,” Goduco says. “We [CMI and other metal fabricators] really contribute to the history of New York. Those things are going to be there a long, long time.”

At nearby 30 Hudson, CMI is working on the observation deck after completing interior work. The deck will have columns, glass glazing, glass walls and custom metal, including special steel plates. When a visitor stands at a certain angle, the 12-ft plates that run through the room will reflect the city skyline with their mirror finish portion; the other portion of the plates has a satin finish.

Project manager John “Jack” Darby says he’s been working on 30 Hudson since about March and expects the project to be completed in February. He explains he divides big jobs into chunks called series to more easily tackle the work. “While doing drawings, we’re taking materials the architect requested and making samples of it,” he says. After that he and his team go out to the field to take measurements, modify drawings with size changes, cut metal sheets and order materials. There’s a lot of modifications throughout. 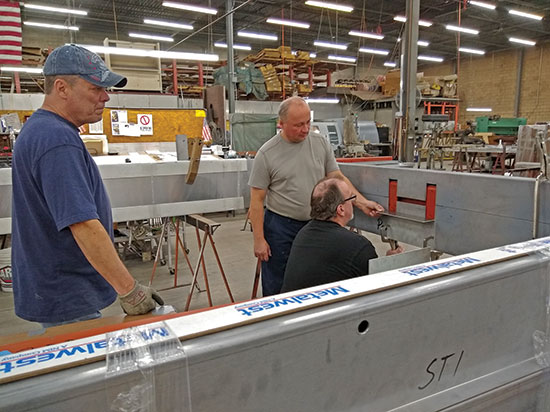 Machinists have been with CMI for between 10 and 35 years. Photo by Eydie Cubarrubia/enr

“It takes us longer to develop details now. It’s design-build for the most part,” Darby says. “We’re helping architects with their goals as well.”

During the shop visit, the steel plates for 30 Hudson are a main focus, as is framework for One Vanderbilt. CMI is doing the exterior metal framing while W&W Glass is doing the glasswork. A big feature will be 14-in. mullions. Eric Luz, CMI’s project manager for One Vanderbilt, says the firm got the job in April 2017 and finally started on site in September.

“Since we started there have been 30 design issuances [changes],” Luz says. “The bottom two floors were originally supposed to be stainless steel; now they’re bronze.” He notes the geometry was also challenging: The first two floors create a trapezoid, with the top of the second floor angling downward. 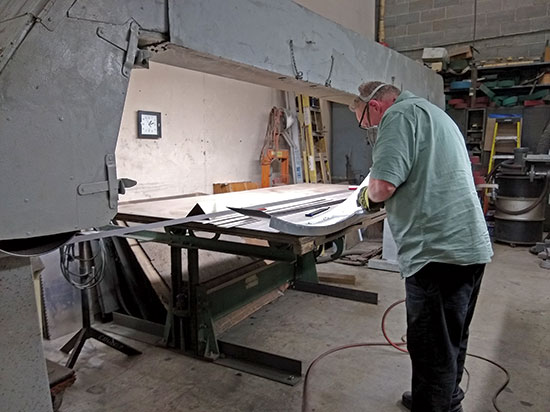 “The building is engineered to be ‘blast-proof’ or ‘blast-resistant.’ Everything except the glass will stay in place” in the event of an explosion, explains Luz.

With so many large, highly complex projects, it’s impressive that CMI can handle everything concurrently.

“Proficiency comes in organization,” Milito explains. “You want to run like materials together,” such as metals of the same gauge, so it makes sense to mix jobs when they use the same type of material or require the same product.

Santo credits his workers’ sense of pride for the quality of CMI’s goods and services.

“All our machinists have been with us a long time, a minimum of 10 years, up to 35 years,” he says. The company, in turn, seems to have earned that loyalty; even during down times, CMI will keep craftworkers on full time, partly because “we don’t want to lose good people,” Santo says.

Besides treating workers like family, CMI also has a strong sense of corporate and community responsibility. Everything is recycled, and leftover metal is sent to scrapyards, making the company LEED compliant for sustainability.

“Their execution is very precise,” says Lotfalla, a senior vice president at Related Cos. “A lot of companies around the country struggle to provide high precision materials.

“They’re in a very difficult trade, which has only become more difficult as these buildings become more intricately designed,” says Jonathan Ninnis, president of OC Development Management. “They’re one of the few out there that really have that level of sophistication, engineering, fabrication to really realize these designs.”

“When Paul and his crew walk in, they’re very passionate about what they do,” Ninnis says.