Thornton Tomasetti celebrated its 70th anniversary Sept. 26. Much of the party (pictured at lower left) happened in The Shed, the convertible performing arts pavilion for which the firm provided structural, facade and kinetic engineering. The company also presented its new leadership, who will be taking on their roles Jan. 1. In the above photo, shown against one of the massive wheel assemblies that move The Shed’s shell, are (from left): Wayne Stocks, president; Peter DiMaggio, co-CEO; Tom Scarangello, executive chairman; Gary Paneriello, managing director; and Michael Squarzini, co-CEO. Scarangello said of the other members of the team: “Their leadership, expertise and teamwork will be critical to the success of our five-year plan and move us all closer to achieving our ultimate goal of being a leader of change and innovation in our industries.” 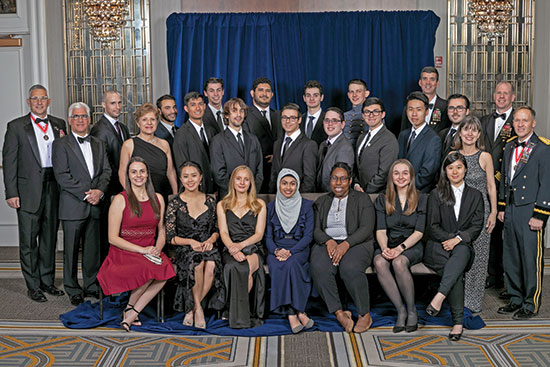 The Society of American Military Engineers held its annual fundraiser Nov. 9, raising money for scholarships to benefit more than 200 students, some of whom are pictured here. Key partners and contributors to the New York City Post, or chapter, of SAME also received awards during the dinner at the Grand Hyatt in Manhattan: the New York City Dept. of Environmental Protection, New York University, HDR and Kokolakis Contracting Inc. “It was a wonderful event where [more than 400] industry leaders came together to celebrate the next generation,” said SAME NYC Post President John Boulé, a senior vice president at Dewberry. The University of Pennsylvania Stuart Weitzman School of Design held its annual Awards gala Oct. 21 at the IAC Building in New York City, feting two scholarship winners: School of Design seniors Amie Patel, recipient of the Witte-Sakamoto Family Prize in City and Regional Planning; and Patrick William Danahy, who earned the Kanter Tritsch Prize in Energy and Architectural Innovation. The gala also honored A. Eugene Kohn, founder and chairman of Kohn Pedersen Fox Associates, and the nonprofit Regional Plan Association, which works to improve the economic health and environmental resiliency of the New York-New Jersey-Connecticut metropolitan region. “This is an exciting and challenging time for the allied disciplines in architecture, planning, preservation, landscape architecture and fine arts,” said Fritz Steiner (pictured at the podium), the school’s dean and Paley Professor. 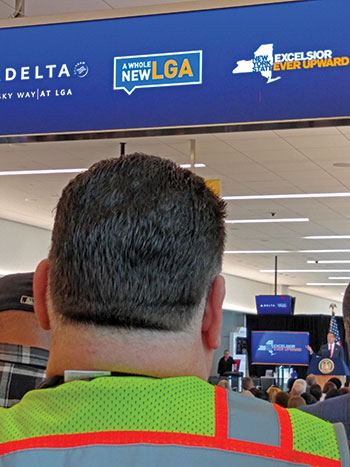 As Delta Airlines unveiled a new 105,000-sq-ft, seven-gate concourse at LaGuardia Airport, New York Gov. Andrew Cuomo (shown in background) made sure to thank the construction workers who built it. Such workers made up a good portion of the crowd who attended the Oct. 29 grand opening of the $4-billion, 37-gate terminal’s first phase. Martin Durney, aviation and federal manager for Burns & McDonnell’s Northeast region, explained to ENR the challenges due to the project’s proximity to Flushing Bay: “The departures level of Delta’s new Concourse G is elevated above the height required by the New York City Building Code and Port Authority resiliency criteria. The arrivals level … is open so water can flow unobstructed underneath the elevated structure. For the future concourses and headhouse, the arrivals level will be constructed using reinforced concrete walls designed to withstand flood forces, and will utilize a flood control system at doors and other penetrations.”

On the Scene: Natural History Museum's Groundbreaking for the Sci-Curious, More