This website requires certain cookies to work and uses other cookies to help you have the best experience. By visiting this website, certain cookies have already been set, which you may delete and block. By closing this message or continuing to use our site, you agree to the use of cookies. Visit our updated privacy and cookie policy to learn more.
Home » On the Scene: Natural History Museum's Groundbreaking for the Sci-Curious, More
New YorkNew York Construction News

On the Scene: Natural History Museum's Groundbreaking for the Sci-Curious, More

Above: science-minded first-graders, along with politicians and American Museum of Natural History participants, helped to officially break ground for the Richard Gilder Center for Science, Education and Innovation on June 12. The $383-million, 230,000-sq-ft project will add classrooms, a redesigned library, galleries and an immersive theater to the museum. Visitors will learn about current scientific research through exhibits, education programs and even the structure itself. “This building will demonstrate sustainability,” proclaimed architect Jeanne Gang (holding the eighth shovel from right), noting its extensive use of natural sunlight and its rainwater collection systems. 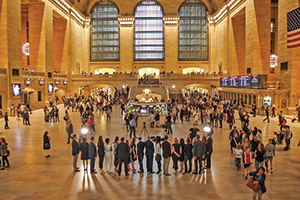 Engineering News-Record editors gathered this year’s national top young professionals on June 20 for the magazine’s 20 Under 40 “Think Tank” in New York City. The group, selected from the Top Young Pros named by judges in ENR’s regions around the country, went to sites both iconic—like Grand Central Terminal, pictured at right—and under construction. After lunch, the pros broke into discussion groups to talk about issues including the future workforce; evolving project delivery, bidding and productivity; infrastructure and infostructure advocacy, funding and market impacts; and the industry’s role in insuring sustainability, resilience and climate change protection. Their insights will be featured in  the Aug. 5-12 issue of ENR. 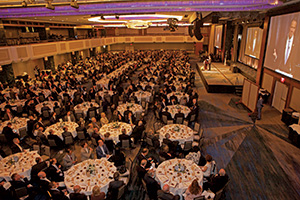 Gov. Andrew Cuomo kicked off the 98th Anniversary Leadership Awards luncheon, shown at left, on May 16 at the Hilton Midtown by telling the crowd of 900: “We have a $150-billion investment program, the largest infrastructure program in the [country].” 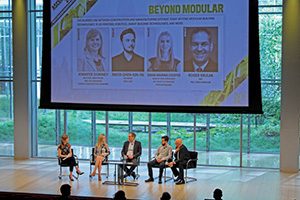 At TheTimesCenter on June 14, pictured at right, more than 300 attended the first Ascend 2019, the Building Congress innovation conference focused on new and upcoming technological changes in design and construction. Panels discussed topics such as Beyond Modular (pictured); The Smarter Building; and Data Dump.

The event “is showcasing some premier innovations in New York and is a driving force for progress in our industry,” said Thornton Tomasetti CEO Tom Scarangello, who is a co-chair of the group’s Council on Innovation & Best Practices.

The Phipps Community Builder Awards Dinner raised more than $1.7 million on May 29 for Phipps Neighborhoods’ programs, which provide communities in the South Bronx with career readiness training and connections to critical resources. The organization is associated with Phipps Houses, a nonprofit developer that builds high-quality developments in neighborhoods in need of investment and opportunity. “Phipps Houses affordable housing is one part of the puzzle to combat poverty, but providing Phipps Neighborhoods’ programs and services really allows people the opportunity to succeed,” said Santander USA CEO Scott E. Powell (shown third from left), one of the Community Builder award winners. Hirschen Singer & Epstein LLP partners Russ Kivler and Oliver Chase (pictured fourth and fifth from left, respectively) accepted the award for the law firm. Others pictured are Adam Weinstein of Phipps Houses, Dianne Morales of Phipps Neighborhoods and Ronay Menschel of Phipps Houses and Phipps Neighborhoods.