Nearly 10 years after it was first proposed, the new Charles Library at Temple University in Philadelphia is on target to open next year. But keeping the project within its $170-million budget and on schedule for a fall 2019 opening has required creative sequencing and a speedy redesign of the 225,000-sq-ft building’s structure from concrete to steel.

The four-story building, which was designed by Snøhetta in collaboration with Stantec, was envisioned as a concrete structure. Scott Sullivan, a principal at Stantec, says that choice was largely driven by aesthetics, allowing for exposed concrete columns and clear views of the underslabs to the floors below. Designers, he says, “wanted it clean and simple.”

But for local contractors, the concept wasn’t so simple. Dozie Ibeh, associate vice president in Temple’s project delivery group, says that when the project was put out to bid for general contractors in 2016, prices came in well above initial estimates. Part of the problem, he says, was a run-up in concrete costs because of high demand from several other major building projects that were underway in the city at the time. Another issue was that the library was originally designed with voided slabs—reinforced concrete slabs that incorporate air pockets to help save weight. “[Voided] slab hasn’t really been done in this market,” Ibeh says. “We felt the contractors put a lot of risk in their [bid] numbers.”

To hold the project to its budget number, Temple decided to switch the structure from concrete to a less-expensive steel system. The university also needed to keep the project on schedule, so structural engineer LERA was tasked with redesigning the building in less than four months while foundation work got underway. 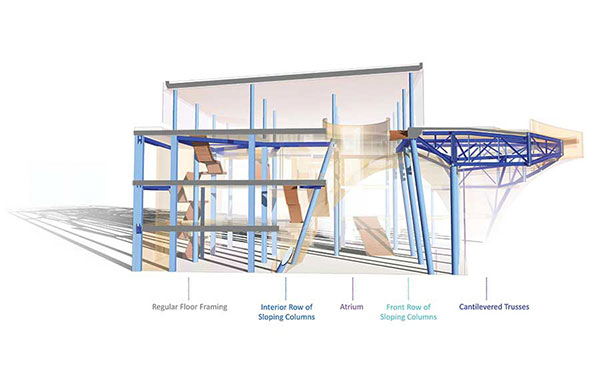 “The delay could have been a year if we didn’t get those packages started early,” Ibeh says.

Foundation work, which was awarded to Hunter Roberts, began in June 2016, just as the structural redesign got underway. Edward Roberts, LERA project manager, says the foundation system was designed with caissons that ranged from 20 ft to 50 ft in length. Because the caissons had already been designed, Roberts says LERA’s new steel design aimed to keep caisson locations, depths and diameters as close to the original design as possible. “We figured out the sequence of installation and focused on the caissons that were going in first,” he recalls. “We worked sequentially to come up with a solution.”

After caissons were completed in October 2016, a mud slab was poured, followed by a waterproofing layer topped with a pressure slab. The 20-ft-deep basement sits 8 ft below the water table and adjacent to two high-pressure water lines. Keeping the basement dry was critical to protect the nearly 2 million books that the new library will house. Nothing was allowed to puncture the waterproofing membrane, so basement-level electrical and plumbing systems were installed above the membrane and below the pressure slab, which ranges from 14 in. to 19 in. thick. Instead of using traditional caisson caps, the caps are integrated into the slab.

The library building, which measures approximately 420 ft long, 160 ft wide and 70 ft tall, aims to maximize available study spaces, resource centers and public spaces while minimizing space used for traditional book storage. The building will feature an automatic storage-retrieval system (ASRS) that can hold about 1.8 million books. The ASRS vault, which measures approximately 50 ft high, 78 ft wide and 132 ft long, will store books in 35,388 stainless steel bins that sit on metal racks. When a book is requested, robotic arms will pull the bin where the requested book is stored and deliver it. “It’s essentially a three-story tall warehouse,” Stantec’s Sullivan says.

While most of the structural system was redesigned in steel, the ASRS remains a concrete structure that ties into the building.  Concrete “fin” walls around the ASRS perimeter resist the lateral earth and water loads acting on the basement. The system includes tall, slender interior columns measuring 26 in. by 26 in.

Temple “wanted to fit in as many bins as they can, so the columns in the space were kept as small as possible,” Roberts adds.

To support the ASRS, the foundation slab is designed for a load of 2,700 psf.

Open spaces are emphasized throughout the library’s main floors, including a three-story domed atrium that is 42 ft tall by 200 ft at its maximum length and extends more than 60 ft into the building. The atrium also features an oculus that opens up views to all corners of the building. “When you walk in, you can see all of the floors,” Sullivan says. “It’s a really great wayfinding tool.”

To achieve large open areas, the team designed a structural system of three steel “spanning walls,” which includes deep steel girders that span up to 98 ft and sloping steel diagonal columns. Of the building’s 120 column locations, more than 40% transfer loads though deep girders, sloping columns or the spanning walls.

The library also features multiple large cantilevers. At the southwest corner, a roughly 52-ft-long truss from the south ties into a 33-ft truss from the west. A braced frame at the northern end of the truss acts as a back-span to the truss, helping economize the weight of the truss members. The back-span of each cantilevered truss is tied down with a sloping column, resulting in additional loads that transfer through the adjacent floor diaphragm.

The “canopy” truss, which the team sees as a signature architectural element of the building, ties together five trusses, the longest of which extends 43 ft. Between the cantilevered trusses, LERA designed bridging trusses to help support the system if a cantilevered truss is compromised.

The building is topped with outdoor terraces and a 45,879-sq-ft green roof. The green roof is part of a stormwater management system that includes two underground basins with a combined size of nearly 10,000 sq ft.

General contractor Daniel J. Keating Co., which started its work after foundations were done, quickly realized that the basins occupied nearly half of its material laydown and equipment staging areas on the site. Craig Hunt, DJ Keating project director, says the company decided to install the basins as early as possible. “After that, we put in blacktop with temporary highway grade paving, and we have a nice work surface now,” he says.

The prime steel contractor, Owen Steel, originally planned to support the project’s massive trusses using a temporary shoring system of steel columns on temporary footings situated along the building’s exterior. Many of those footings, however, would conflict with the installed basins, so Owen instead designed a network of dozens of large cables that pass through the building’s interior and support the cantilevers.

The strategy allowed DJ Keating to expedite basin installation, but the cables challenged crews working in parts of the interior. “It holds us up in some spots where a cable is running through where ductwork is supposed to be, so we will have to put that in later,” Hunt says. “Where cables run through slabs that we’ve poured, we will have to do a small cutout with a floor patch later.”

Despite dramatic changes to the building structure and the sequencing challenges, Joe Lucia, Temple University Libraries dean, says designers were able to maintain the building’s overall architectural intent and support its future programmatic needs. “In spite of all of the things that had to be resolved on a technical level, we’re getting close to our original vision,” he says.

2021 2Q Cost Report: Raises Are Back for Professional Staff But at Conservative Rates