The Petersen Automotive Museum is nearing the finish of a 13-month, $125-million interior and exterior renovation that includes a flowing metal facade that transforms the once-boxy building into a hot-rod red, metallic ribbon dance on one of the busiest intersections in Los Angeles. The museum is set to open on Dec. 6.

Assembling the complex facade above the busy corner of Fairfax Avenue and Wilshire Boulevard was a challenge made even more complicated by simultaneous construction of the Wilshire Fairfax stop for the Los Angeles Metro line underneath, says Sam Ragsdale, senior project manager, MATT Construction, Santa Fe Springs, Calif. “Wilshire couldn’t have lane closures,” says Ragsdale. And to get a lane on Fairfax took coordinating around the metro project and with the Los Angeles Dept. of Transportation, he says. MATT managed to keep off the road as it pared the building’s exterior down to its structural box to begin attaching the facade. 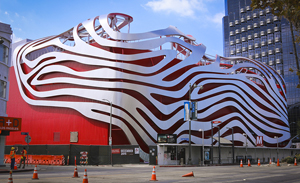 “We’re built right up to the property line and the new façade will be cantilevered over that property line,” says Harlan Prather, assistant project manager, MATT. The facade is considered “a canopy” by the City of Los Angeles so it can cross the property line, he says, but the attachment points must be inside the property line, according to city building requirements. In some cases that required cutting the building back to make room. “We had to modify the existing structure and check and survey as the facade went up,” says Prather.

Preparation included chipping and bushing existing brick to make space for the corrugated rain screen panels and the facade, which was designed by Kohn Pedersen Fox Associates, New York City and fabricated in the workshops of A. Zahner Co., Kansas City, Mo. KPF principal Trent Tesch says the owner’s requirement was, “They wanted it to look fast.” He says the resulting design was inspired by smoke-trails made during a car’s aerodynamics wind tunnel testing. “We took the design to Zahner to see if it was possible, and they said, yes, yes, yes. They always say yes,” says Tesch.

“Of course we said yes. We can build anything with the right amount of money,” says Anthony Birchler, a Zahner vice president for engineering and sales. Having said yes, the structural engineer’s next words were, “How can we do it on budget?”

To realize KPF’s design, each of the 310 brushed stainless steel and aluminum panels is uniquely shaped but “to add rhyme and reason” to the manufacturing, Zahner classified them into three groups: Y-shaped, straight and cantilevered, says Birchler.

“Anchorage is always the biggest challenge,” Birchler adds. “You don’t want it to get to the site and not fit.”

A 6-in.-dia aluminum pipe runs through each of the panels like a spine. Moment connections anchor the spine to tubular-steel columns that attach to the building’s structural frame. The support system stubs out of the building at many angles and levels, which must perfectly match the panels’ design.

"We did a good job,” says Birchler. “Every single one fits.”

Getting the odd-shaped panels to Los Angeles was another challenge. Fabrication was ahead of schedule, so Zahner didn’t ship for schedule. Instead it followed the “Jenga Principle,” meaning Zahner shipped whichever panels would fit together on an 8-ft by 40-ft flatbed truck.

“Some flatbeds had five, six or seven panels,” says Birchler. “One last week had one panel.”