Submitted by Arizona Dept. of Transportation 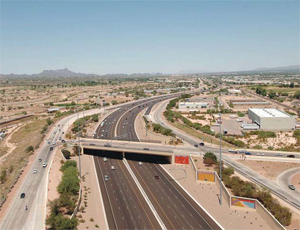 When awarded, this widening was ADOT’s largest project ever. The improvements included widening approximately five miles of Interstate-10 through the heart of downtown Tucson, increasing it from six to eight lanes plus auxiliary lanes between ramps. Sixteen bridges were demolished and rebuilt to meet current federal standards, all of which took place while the interstate remained open.

The original improvements were designed as a 10-year construction effort to be completed in three sections. The project was streamlined to a three-year project by closing all exit and entrance ramps for the safety of the traveling public and the construction workers.

The judges were very impressed with the level of partnering on this project. As a result of the collaborative efforts to adjust the schedule to meet the needs of the public and the businesses along the frontage roads affected by the ramp closures, the project was completed approximately six months ahead of schedule.