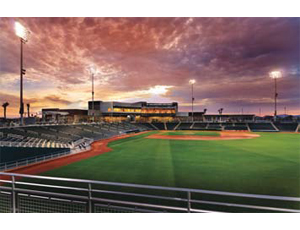 The 250-acre complex consists of a new spring training ballpark and two clubhouse/practice facilities for the Cleveland Indians and Cincinnati Reds with over a dozen practice fields among them. Goodyear Ballpark includes 8,000 in stadium seats, an outfield berm that can seat 1,500, and a right field pavilion party deck that can hold 500.

The City of Goodyear had never built a project over $10 million when it undertook this $103-million complex. When the project developer went bankrupt midway through the project, strong teamwork and project management became even more crucial. Despite this, the team successfully completed the project on schedule and millions under budget, which paid for increased scope.