This website requires certain cookies to work and uses other cookies to help you have the best experience. By visiting this website, certain cookies have already been set, which you may delete and block. By closing this message or continuing to use our site, you agree to the use of cookies. Visit our updated privacy and cookie policy to learn more.
Home » Best of Nevada: Dema Guinn Concourse at the Nevada State Museum
SouthwestSouthwest Construction ProjectsFeatures 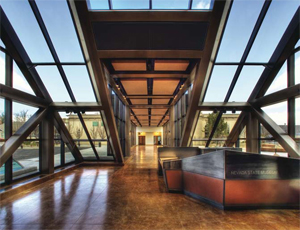 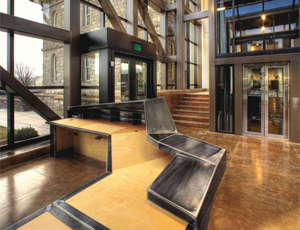 An elegant steel and glass concourse named after Nevada’s former first lady, Dema Guinn creates a graceful single entry point that connects the Nevada State Museum with its North Building while also serving as a changing exhibit area. The single-level transparent building has a distinctive right angle triangular-shaped volume that serves as both main entryway and atrium area. It resembles a modern reinterpretation of an 1800’s mine head frame, reflecting Nevada’s rich history in mining; Nevada is known as “The Silver State.” The concourse additionally acts as a transitional area, physically and aesthetically, linking a 19th century limestone building and two 20th century structures.

“This small but breathtaking building does for the Nevada State Museum what I.M. Pei’s entrance did for the Louvre,” says judge Tony Illia. “It’s an eye-catching new entrance that reinvigorates the museum; it injects visual excitement while also improving visitor circulation.”