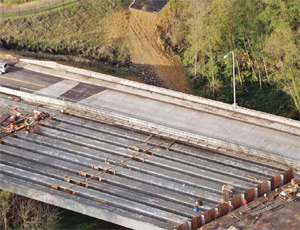 To take advantage of a 45-day in-water-work period necessary to protect salmon, HHPR to divided the work into two phases and bid it separately. This allowed it to relocate an existing creek during the first summer. A number of heavy storms affected the project. The first, in the fall of 2007, occurred just after relocating the creek noted above. The channel had been restored just days before the big rain hit. Fortunately, the channel handled the rainfall very well, and had minimal issues with scour. The second event occurred in the winter of 2008. Unfortunately, this event did cause some damage to the roadway as ditches overflowed, undermining a portion of it. The contractor and construction services team worked all night to resolve storm problems, and restored function to the drainage facilities.

Although there are always impacts to adjacent properties in road widening projects, one of the more difficult properties on this project was a Verizon facility that provided 911 emergency phone service to all of eastern Oregon. Verizon was located near the existing creek, and at one point in the project, the road was being raised over 14 feet at one of its driveways, and 7 feet at the other. Also, the Verizon property was located near the existing culvert and on the inside radius of a horizontal curve. This location made it very difficult to shift the road alignment around the facility. Relocation of the Verizon facility was also a cost-prohibitive option, as it would require a complete new structure and new equipment installed before removing any of the existing structure. As a result, Harper Houf Peterson Righellis Inc. worked extensively with the Verizon coordinators, and came up with a plan that would involve construction of a wall within 3 ft of the existing building.