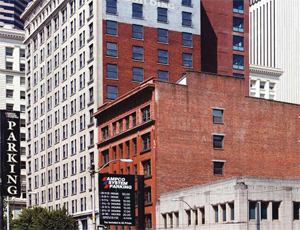 The $10.3 million project consisted of a 15-story addition and seismic retrofit to The Alaska Building, Seattle’s first steel framed skyscraper, originally constructed in 1904.

The new tower, built at the axis of the existing L shaped building, provided seismic bracing to the historic building while limiting alterations and modifications to the structure’s historic interior spaces. As the project moved into the construction phase, Graham’s coordination with the owner’s structural steel fabricator proved invaluable in assuring that the new structural elements were able to interface seamlessly with the 104 year old existing structure. A high degree of coordination and teamwork was also critical in mitigating the constraints posed by erecting a 15 story highrise in Seattle’s historic and cramped Pioneer Square. Graham took great care in working with the steel erector and fabricator to develop very detailed load lists and delivery schedules to ensure that structural steel delivered to the jobsite could be offloaded from the truck and immediately erected and incorporated into the structure.

One particular challenge was the building’s approximately 700 existing wood windows, and the constraints put in place by the Pioneer Square Preservation Board relating to their renovation/replacement.

Graham was able to get invaluable input from our selected subcontractor early on in the process, which allowed the design team to present options to the Board relating to preserving the historic character of the existing windows. Many of the windows were damaged or otherwise unworthy of repair, but new sashes and frames were able to be built which matched the profile and construction of the old windows perfectly. Also, operable windows were completely dismantled in the field and restored to a like new condition off site. Managing the surveying and selection of these windows for either repair or replacement, along with providing effective quality control standards on a portion of the project that was very high profile from an historical standpoint, allowed the client to incorporate high quality, energy efficient windows within the constraints of the Preservation Boards standards and requirements.