Manufacturing Sector Powers Up in Arizona

Manufacturing megaprojects including Intel’s $20-billion Fab 52 and 62 semiconductor plants, scheduled to open in Chandler, Ariz., in 2024, and the $12-billion TSMC semiconductor factory in north Phoenix, also anticipated for 2024, are creating thousands of construction jobs as well as high-paying long-term jobs. Taiwan-based TSMC, in fact, recently announced it will build a second factory, increasing its Arizona investment to $40 billion.

Numerous other manufacturing-sector projects are under construction in the greater Phoenix area. Sunlit Chemical, also based in Taiwan, expects to complete the first phase of its manufacturing facility in 2023. The $100-million investment includes a 900,000-sq-ft facility that will produce hydrofluoric acid and other high-purity industrial chemicals for the semiconductor industry. The company expects to complete the project’s second phase in 2025.

On 143.6 net acres in Glendale, west of Phoenix, Nestlé USA is continuing with its $675-million plant, which will produce creamers. The 630,000-sq-ft factory is expected to be operational in 2024.

In nearby Chandler, Edwards and EMD Electronics are completing projects that support the semiconductor industry, and next door in Gilbert, Corning’s manufacturing plant should open in 2024.

Electric vehicle manufacturers Nikola and Lucid are expanding in Pinal County, and other companies are also building there including battery recycler Cirba Solutions; ecube, facility optimization specialist; science- and technology-focused Solvay; manufacturer Kohler; and KPCT Advanced Chemicals, which plans an electronic-grade sulfuric acid manufacturing plant in Casa Grande, expected to be operational by 2025.

The Arizona Commerce Authority in Phoenix noted that in October, Arizona achieved the fastest year-over-year nationwide manufacturing job growth, with 15,000-plus manufacturing jobs added through November. 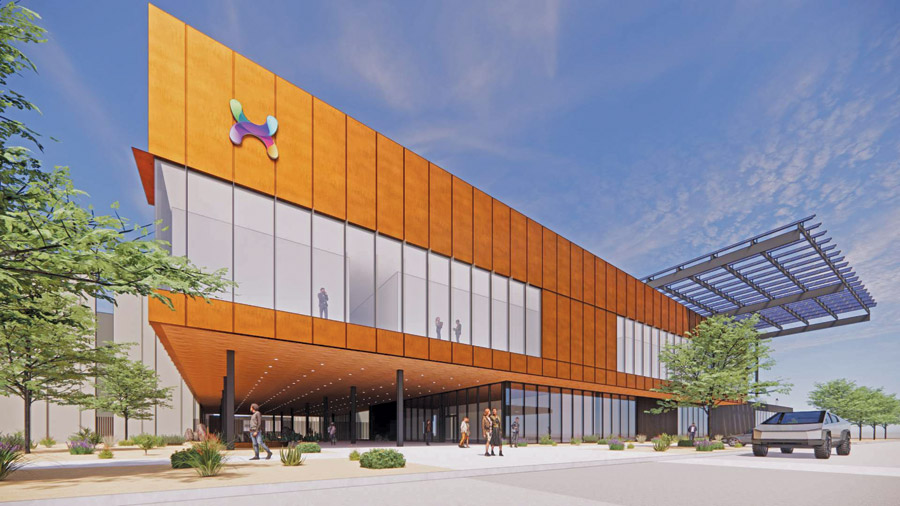 Southeast of Phoenix, Mesa has been a major beneficiary of this worldwide interest. ElectraMeccanica, for example, has just opened its electric vehicle manufacturing facility.

“Thanks in part to our business-friendly environment, strong infrastructure, talented workforce and strong supply chain, it’s not a surprise that organizations such as JX Nippon choose to locate in Mesa,” says Mayor John Giles.

Designed by Architects at Kajima, based in Atlanta, with design and build support from Kimley-Horn, the plant will produce components for semiconductors and more than double the production of JX USA’s Chandler plant. Targeting LEED Gold certification, the building will incorporate solar-covered parking, electric vehicle charging and low-water desert landscaping.

“It is an important mission of XNRGY as well as Gensler’s to design a state-of-the-art headquarters.”
—Jeffrey Maas, Senior Associate, Gensler

JX USA will also use the site to incubate business development and intends to make it the center of company business in the advanced materials field in the U.S., says Brian Valliere, the company’s director of operations. He adds that land grading has been completed and the foundation and underground construction work has begun.

XNRGY, a custom air handling manufacturer, is planning a 250,000-sq-ft U.S. headquarters building in the new Gateway East development, next to the Phoenix-Mesa Gateway Airport. The 270-acre project is being developed by Boyer Co. XNRGY will be the first business to locate in Phase 1 of the master-planned development, says Matt Jensen, a partner with Boyer. The $75-plus-million project will focus on climate solutions for research and development life sciences, health care, data centers, semiconductor clean rooms and battery manufacturing.

In the early planning development-permitting phase, the XNRGY project is scheduled to begin in the first half of 2023, says Ryan Abbott, executive vice president for Clayco’s Southwest region. Phase 1 is scheduled for completion in the first quarter of 2024.

“Sustainability is of the highest importance to XNRGY, both in the product it produces and in the facilities that it uses to create those products,” he says.

Jeffrey Maas, senior associate for project architect Gensler, says the facility is targeting LEED certification through strategies centering on reducing embodied carbon and water use. “This project is all about sustainability. It is an important mission of XNRGY as well as Gensler’s to design a state-of-the-art headquarters that is sustainable and innovative in design,” he says.

The company is investigating a concrete additive integrated into the concrete panels that will reduce carbon impact, Maas says.

“This is a complex manufacturing system, which required meticulous integration, commissioning and start-up strategies,” Abbott says. “The same market demands that require the thermal energy solutions that XNRGY produces have increased the demand for sophisticated building construction while reducing the supply of the labor and components needed to construct them.”

In addition, Virgin Galactic is building its manufacturing facility at the Phoenix-Mesa Gateway Airport; operations are expected to begin in late 2023. The company expects the facility will produce as many as six Delta-class spaceships per year.

In Coolidge, Ariz., electric truck manufacturer Nikola is in the latter stages of its Phase 2 assembly plant expansion. A spokeswoman for the Phoenix-based company notes the project should complete by the first quarter of 2023, enabling the plant to produce 20,000 units per year.

Nearby, Proctor & Gamble’s $500-million manufacturing plant on 427 acres will support the company’s fabric care portfolio. Expected to be operational by 2025, construction of the Inland Port Arizona facility is expected to begin in 2023.

To be developed in phases, the $300-million building is expected to be operational by the second quarter of 2023 and fully built out in 2025. Phoenix-based Archicon Architects will design the administrative building and provide site planning, and PGAL is the architect for the internal technical infrastructure. Chandler-based Mortenson is the general contractor.