Still Building Strong After All These Years

Chuck Jablon was born to be a builder. Gifted with what his grandfather called the “magic,” the young Jablon showed an early innate interest in tools, along with an ability to put things together and fix what needed fixing.

One summer that grandfather handed young Chuck a toolbox and put him to work on a construction site. And, as legend—and Skanska USA’s Legacy Award nomination—has it, “before long, he surprised his coworkers by masterfully finishing their projects while they finished their lunch break.”

The young builder was on his way. By high school, while mowing lawns in his hometown of St. Petersburg, Fla., many of his 72 clients would hire Jablon for various fix-it jobs.

“People would always ask me, ‘Can you replace my door? Can you fix my roof? Can you fix my window?’” Jablon recalls. “And no matter what anybody asked me to do, I could fix it. I always knew that I was good with tools and that I could be a good tradesman because I did it without any training.” 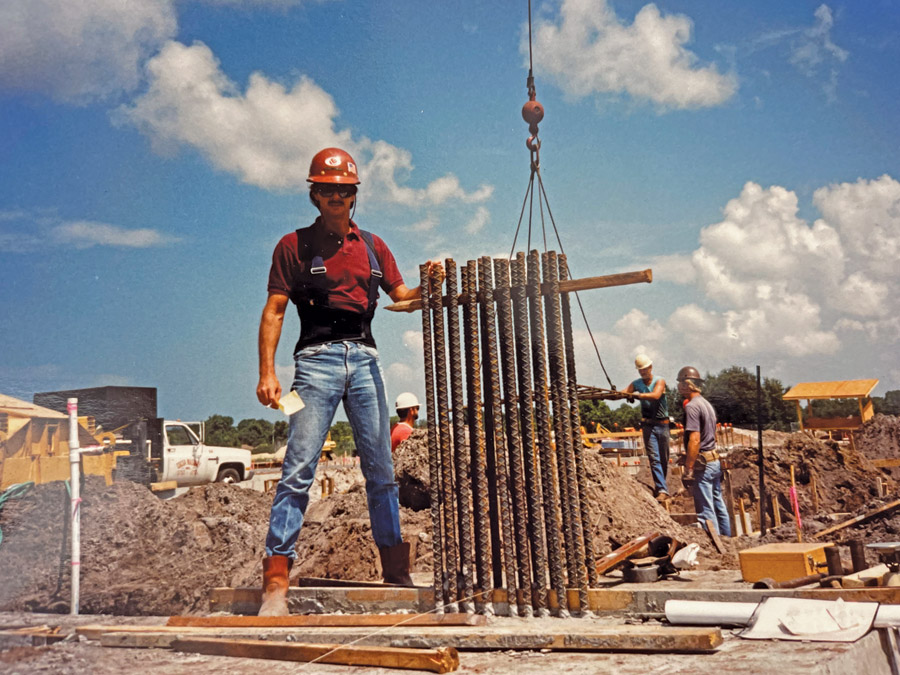 Jablon on the site of the Atrium on the Bayshore condominium project in Tampa.
Photo courtesy Chuck Jablon

Jablon has never lacked for confidence. And at roughly 7:15 a.m., on Nov. 28, 1971—a time and date so important he remembers it to this day—Jablon took his literal first step toward his future career as a master builder, walking onto a St. Petersburg condominium construction site with a sign posted seeking “tradesmen and laborers.” In an interview with ENR, Jablon recalled the details of that morning.

Greeted by the project superintendent with a not-warm “What do you want?” the young Jablon quickly responded in kind with “I can read—I saw the sign. It said tradesmen and laborers, and I’ll take either. I need a job.”

“You won’t last two weeks,” the super responded. To which Jablon quickly shot back, “I’ll have your job in a year.”

Appreciating the young man’s attitude, the superintendent told Jablon to come back the next day. “What’s wrong with today? It’s only 7:15,” Jablon replied.

With a hardhat in hand, he set to work for his first official day in the construction industry. And, it should be noted, within five years—instead of the one year Jablon predicted—he was promoted to superintendent. 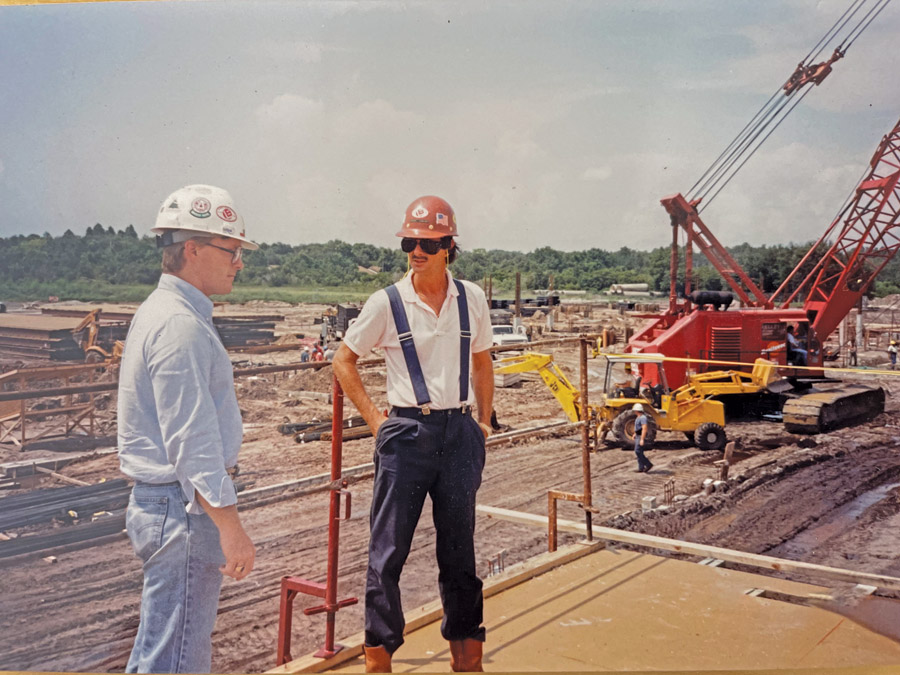 Jablon’s colleagues note not only his construction expertise, but his infectious enthusiasm for the work.
Photo courtesy Chuck Jablon

Now in his 52nd year in the construction industry—and his 19th with Skanska USA Building, where his current title is senior vice president for construction operations—Jablon’s portfolio of successfully delivered projects is a long and storied one, including assignments for Tuskegee University, MacDill Air Force Base, the city of St. Petersburg and, the client of perhaps his most prestigious work, Florida Polytechnic University, among many, many others.

“Chuck’s passion for the art and science of building lies at the heart of his legacy, and his excitement is both palpable and infectious.”
—Michael Brown, Executive Vice President and General Manager, Skanska

He’s still going strong, too, currently overseeing four projects: the $62.7-million Imagine Clearwater project for the city of Clearwater, Fla.; a $44-million improvement project for the city of Tampa’s convention center; a 63,000-sq-ft courthouse for the Florida Dept. of Management Services in St. Petersburg; and, significantly further from home, the $26-million Saint Nicholas National Shrine at the World Trade Center in New York City.

In short, if Skanska USA’s Legacy Award nomination for him is accurate, Chuck Jablon is still having a great time.

“They say you’ll never work a day if you choose a job you love,” wrote Michael Brown, executive vice president and general manager for Skanska, in the firm’s nomination of Jablon for ENR Southeast’s Legacy Award. “If that’s true, I can assure you that 52-year construction industry veteran Chuck Jablon has never had to work a day in his life. Chuck’s passion for the art and science of building lies at the heart of his legacy, and his excitement is both palpable and infectious.”

Brown adds that Jablon’s legacy is multifaceted. “Chuck is recognized as a master builder of complex designs, transformational parks and landscapes and [he makes] authentic connections with team members, customers, designers, AHJs and key trade partners.”

Speaking of his 19 years with Skanska, Jablon says, “It’s been the best run that I could ever imagine. With all the resources that we have, I’m able to compete for projects that a lot of other companies wouldn’t be able to go after.”

Both of those points were critical for Skanska’s contract to deliver Florida Polytechnic University’s Santiago Calatrava-designed Innovation, Science and Technology building in Lakeland. That project earned numerous accolades, including ENR’s Southeast Project of the Year and Global Project of the Year in 2015. The achievement also earned Jablon recognition as an ENR Newsmaker that year, in part for delivering the challenging Calatrava design on time and on budget.

As ENR reported in 2015, just after the project’s completion, Calatrava had expressed his doubts to Jablon about the ability of U.S. craftworkers to deliver the complex, glass-sheathed, 162,000-sq-ft structure—topped by a 250-ft-long operable skylight system—to the level of excellence the architect was envisioning.

After the project’s completion, Calatrava affirmed in a letter to Jablon that the project team had indeed met his mark, noting: “In my opinion, [the results] solidified your construction team as one of the preeminent builders in the nation.”

Known for his relentless pursuit of delivering projects precisely to the owner’s and architect’s vision, and preferably exceeding their expectations, Jablon called Calatrava’s praise “the highest award a builder can achieve.”

David Calhoun, assistant vice president of facilities and construction for FPU—and previously a project manager on the IST building project—credits “a lot of the success” of that project, and its follow-up, the Applied Research Center, to Jablon’s knack for “assembling the right team to accomplish the project as well as defining the appropriate scopes and clearly defining expectations.”

Additionally, there’s the pride of being a builder that Jablon carries with him and strives to share with others.

“Chuck looks at [construction] as a profession that’s really second to none,” says Calhoun. “There’s a level of craftsmanship as well as just pride in your work that he also instills in his teams to make sure that they meet and achieve.” 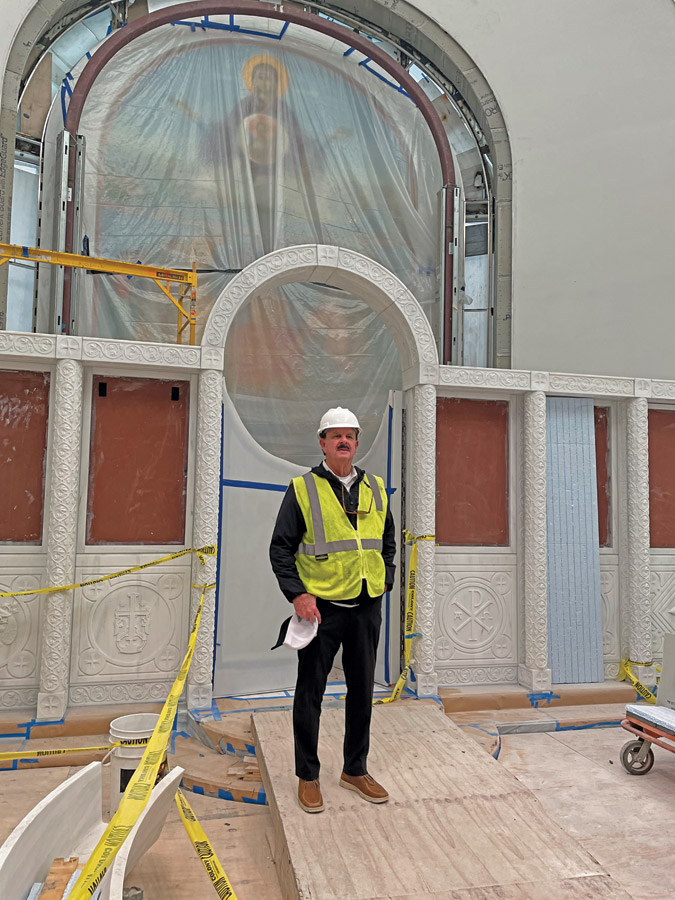 In addition to his Florida projects, Jablon is overseeing the St. Nicholas National Shrine at the World Trade Center in New York.

Echoing the opinion of Jablon as an expert team-builder is Chris Ballestra, the managing director of St. Petersburg’s Development Administration who helped lead the city’s effort to build the new St. Pete Pier, which opened in July 2020. The project—which ended up requiring not one, but two international design competitions before the city could settle on a final project—was this past October named one of two U.S. projects to win the Urban Land Institute’s 2022 Global Award for Excellence.

“Chuck is a master at putting a team together of good people,” says Ballestra, who’s known Jablon since the early days of the pier project’s development process, nearly 13 years ago. “His people and Skanska are all just top shelf. He gets the best people on a team, and I think it really comes from his experience.”

Jablon has another trait that sets him apart, says Ballestra. “One of the best things I like about Chuck is while he’s been doing it for a long time, he’s one of the best listeners that I know,” he says.

Unlike others, Ballestra says, “Chuck is all ears. He’s always looking for the latest and greatest best practices of how to do things better.”

Another remarkable trait is Jablon’s ability to remain energized and enthusiastic about projects.

“He gets younger every day, that’s the thing that is mind-blowing to me,” Ballestra says. “He’s a tough cookie, and he works his butt off. That’s the bottom line—nobody works harder than Chuck.”

“It’s what I want to do every morning,” Jablon says of his work. “That’s what makes my blood run. I look forward to going to work. I’ve never missed a day of work.”

And he’s not planning to stop anytime soon.

For all of his project achievements, for his infectious enthusiasm and for always striving to deliver the best project possible for every client, ENR Southeast is pleased to recognize Chuck Jablon as its 2023 Legacy Award winner.