The U.S. Army Corps of Engineers has given the final go-ahead for a $2.3-billion sediment diversion project in the Barataria basin in Louisiana, near the Mississippi River, where climate change and damage from the 2010 Deepwater Horizon drilling platform collapse have battered coastal estuaries.

According to the Louisiana Coastal Protection Authority, the Mid-Barataria Sediment Diversion project will restore river sediment flows into the basin, which has one of the world's highest land-loss rates and was one estuary hardest hit by pollution from the Deepwater Horizon oil spill, a problem that was exacerbated by federally-built river levees.

The Corps signed a record of decision for the project on Dec. 19 and granted permits necessary, including one required under Section 404 of the U.S. Clean Water Act. Construction is expected to begin in 2023, dependent on the status of the funding.

The project will reestablish a connection between the river and the basin by transporting sediment, freshwater and nutrients into the basin.

The structure will consist of a gated system to control flows, an inlet in the river to capture sediments, and a long canal to deliver sediment to the basin. At peak capacity, up to 75,000 cu ft per second of freshwater and its sediment and nutrients could be transferred. The aim is to rebuild and sustain up to 26,000 acres of wetlands, which will provide increased protection to local communities from hurricane-related storm surges.

“The green light on this project moves us closer to finally implementing a critical component of the solution to our land loss crisis that science has pointed us to for decades – using the land-building power of the Mississippi River to sustainably build and maintain land,” said Chip Kline, authority chairman, in a statement.

He said the approvals would "make our approach to coastal restoration and protection efforts stronger, more effective and more innovative.”

Major Gen. Thomas Sands, a retired former commander of the Corps’ New Orleans District and now a senior advisor at Dawson & Associates, told ENR that the sediment diversion project is the cornerstone of the coastal authority's master plan. “Bottom line, this is a substantial step forward … to demonstrate that it is possible to ultimately get to a process where they can have a sustainable coastline.” 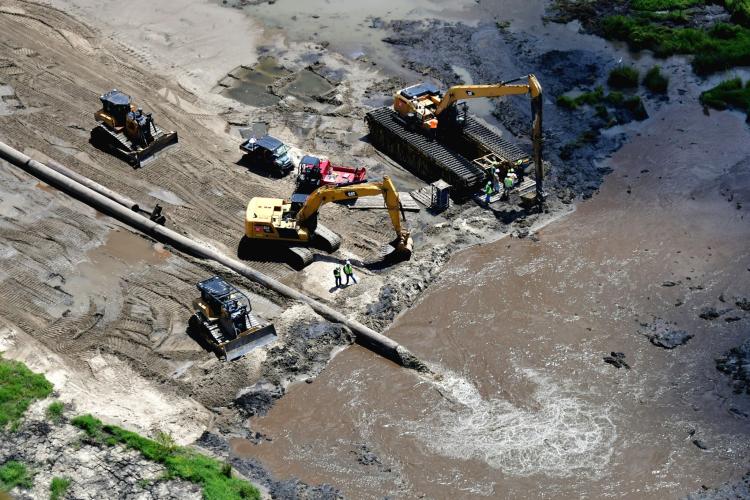 The project, in the works since 2013, is controversial. Local fishing and some wildlife groups say the infusion of freshwater will devastate the local Bottlenose dolphin population.

But Jim Tripp, a former attorney for the Environmental Defense Fund who has worked on coastal issues since the 1970s, says the dolphins are not native to the basin and only migrated there when the water grew saltier.

Tripp says that conditions within the basin will change no matter what approach is pursued, including deciding not to act. “If we do nothing … the whole system will deteriorate further.”

New Orleans and communities surrounded by levees will become more exposed to storms because the wetlands just won’t be there to absorb the brunt of severe weather, he says.

The authority has said it will spend up to $20 million to protect dolphins in the estuary; the Corps project permit requires the agency to develop plans for both marine mammal protection and wetland mitigation.

Many environmental groups, including the Environmental Defense Fund, support the project. Tripp says that natural flows of sediment, salt and silt into the estuary that had existed for thousands of years have been disrupted by Corps-built flood control and navigation levees along the Mississippi.

“For anyone who cares about addressing coastal land loss, and all of the ill consequences of levees for flood protection and navigation … this is an incredibly significant project,” he says.

The authority has requested that oil spill settlement dollars fund the project. The Louisiana Trustees Implementation Group—state and federal agencies responsible for overseeing how the state portion of that money is spent, is expected to publish a record of decision on project funding early in 2023.

Working in Tandem with Dredging Projects

The sediment diversion project is so important, project supporters say, because it provides a sustainable source of materials to rebuild the coast—unlike dredging projects to rebuild land that eventually would deteriorate without new silts, clays and sediments.

Here, dredging projects are an important component of the coastal authority's master plan. Also, some areas along the coast are too far away from the Mississippi for a sediment diversion project to work effectively, Tripp notes. “In those cases, dredging is better,” he says.

A $181-million marsh restoration project in the upper portion of the Barataria basin has built nearly 645 acres of marsh habitat out of a planned 1,200 since the project’s inception.

That project, paid for by the spill fund and overseen by the National Oceanic and Atmospheric Administration, includes five marsh creation areas, each of which has a unique shape and acreage and requires a specific approach to construction, says Donna Rogers, NOAA project manager. Moffat & Nichol is the design engineer. Weeks Marine, the prime contractor, is using a 30-in. cutter suction dredge that has enough horsepower to work in remote areas.

Three pump boosters—two of them electrically powered—will provide the necessary flow conditions through 13 miles of pipe to push sediment to the marsh restoration site. According to Nick Cox, the Moffatt & Nichol engineer of record for the project, the construction team had barely assembled and started work in 2021 when Hurricane Ida hit.

The storm “severely impacted the project site,” Cox says, eroding much of what remained of natural marsh, and placing muddy sediments on top of a sandy three-mile access corridor to the site, making it impassable. While the dredge material from the Mississippi is a renewable resource, there is a finite volume within the allocated borrow areas that can be used before the borrow area refills with sediment transported by the river.

“We had to use some of our sediment budget to rebuild that access corridor that could have gone to marsh creation areas,” Cox says.

The construction of three of the marsh creation areas is expected to be finish by spring, with completion of the other two areas dependent on when sufficient sediment is available.