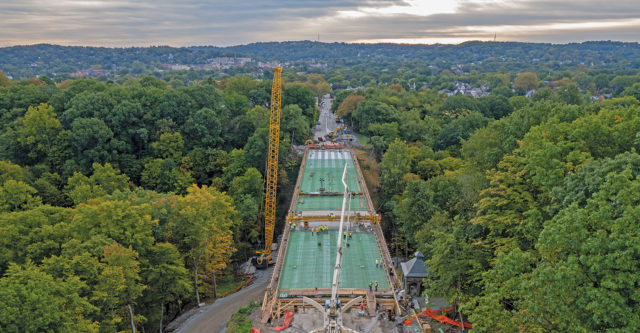 Pittsburgh’s Fern Hollow Bridge is set to open to traffic on Dec. 23, less than 12 months after its collapse on Jan. 28. The HDR-Swank design-build team spent less than one year restoring a locally valued crossing that carried up to 19,000 vehicles daily.
Photo courtesy of Swank Construction Co. 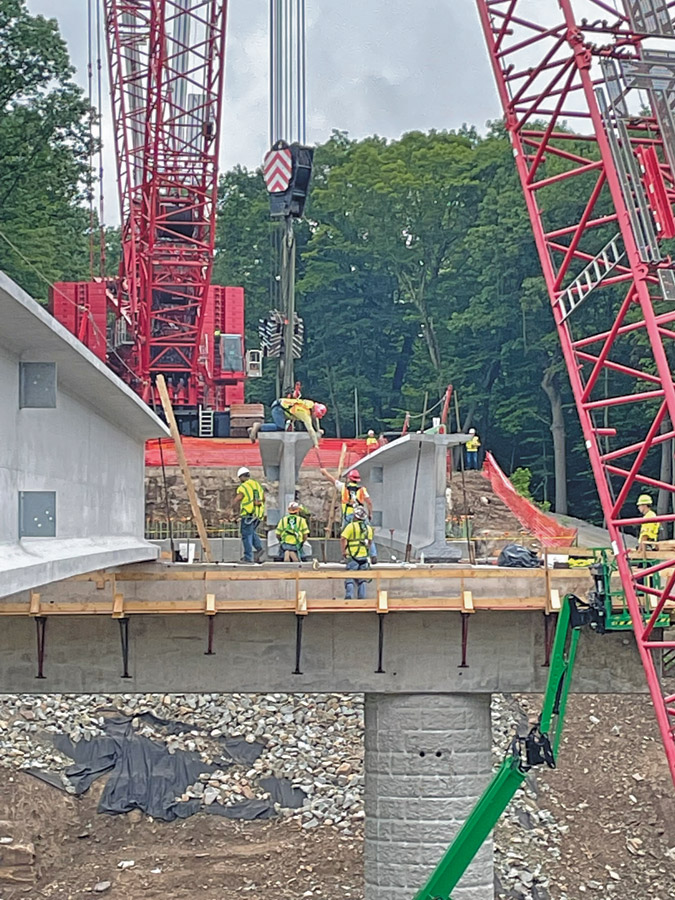 A crew from Swank Construction sets a prestressed concrete beam shortly after its delivery in July.
Photo courtesy Pennsylvania Dept. of Transportation

A spirit of celebration was in the air last August as Pittsburgh residents cheered a 155-ft-long bulb-tee beam making its way up a narrow street to the entrance of historic Frick Park, where work was underway on a three-span prestressed concrete replacement for the 50-year-old Fern Hollow Bridge that collapsed in January.

Jason Fuller, project manager for HDR, which teamed with Swank Construction Co. for the replacement effort, likened the warm reception of a bridge component to “a parade-like atmosphere, something you don’t often see with a transportation project.”

Nor do such projects typically attract the kind of national attention that followed the sudden failure of the city-owned 447-ft-long, three-span continuous steel “K-framed” bridge. Eight people were injured when the Jan. 28 collapse sent a transit bus and several other vehicles tumbling about 100 ft into a ravine.

The incident remains under investigation by the National Transportation Safety Board, with a report on a probable cause expected sometime in 2023.

The ensuing months have seen an illustrative exercise in collaboration among multiple levels of government and the HDR-Swank design-build team. As a result, it took less than one year to restore a crossing that carries up to 19,000 vehicles daily and serves as a critical emergency response route.

The bridge collapsed just hours before President Joe Biden was scheduled to visit Pittsburgh to discuss infrastructure. He viewed the damage before returning to the White House, then returned in October as the replacement structure took shape.

Plans now call for two of the bridge’s four lanes to open to traffic on Dec. 23, with remaining work to be complete this spring. The 64-ft-wide structure will also include a 5-ft-wide sidewalk and a 10-ft-wide shared-use path.

With all the notoriety the Fern Hollow Bridge replacement has received during the past year, Fuller says it was the process that truly sets the project apart.

“We just needed to do this really quick, and it’s unbelievable how well we worked together to make decisions in a timely manner,” he says. “Everyone was on board to make it happen.” 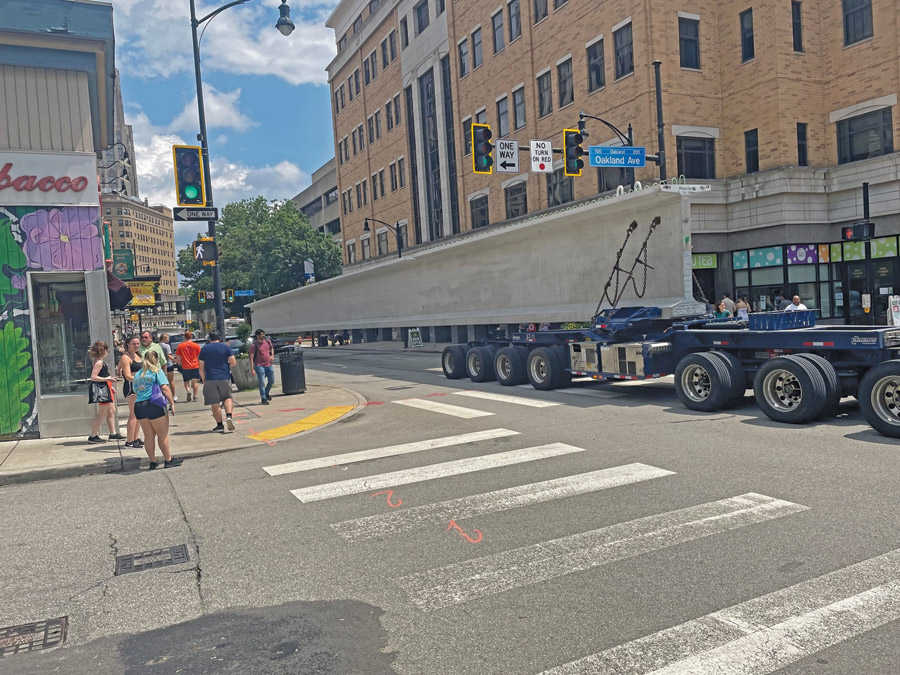 Within a week of the collapse, plans to restore the bridge were well underway. Local and state proclamations authorized the Pennsylvania Dept. of Transportation to oversee the replacement project and secure an initial $23.3 million in federal funding. PennDOT was also allowed to bypass the normal bidding process, selecting Swank and HDR using emergency procurement procedures.

The high level of local, state and federal support for expediting the bridge restoration was critical, says PennDOT district executive Cheryl Moon-Sirianni. “Even if money had already been programmed,” she says, “to procure the consultant and contractor for a local project like this, plus get all the approvals, you’d be standing here four or five years from the first collapse before you got something into the ground.”

Fuller says that while the project team had geological information on the site from another bridge project underway nearby, there were plenty of other questions to address. They ranged from traffic patterns and capacity to neighborhood, environmental and historic preservation issues, including the close proximity to the west abutment of a park entrance gatehouse designed by noted architect John Russell Pope. 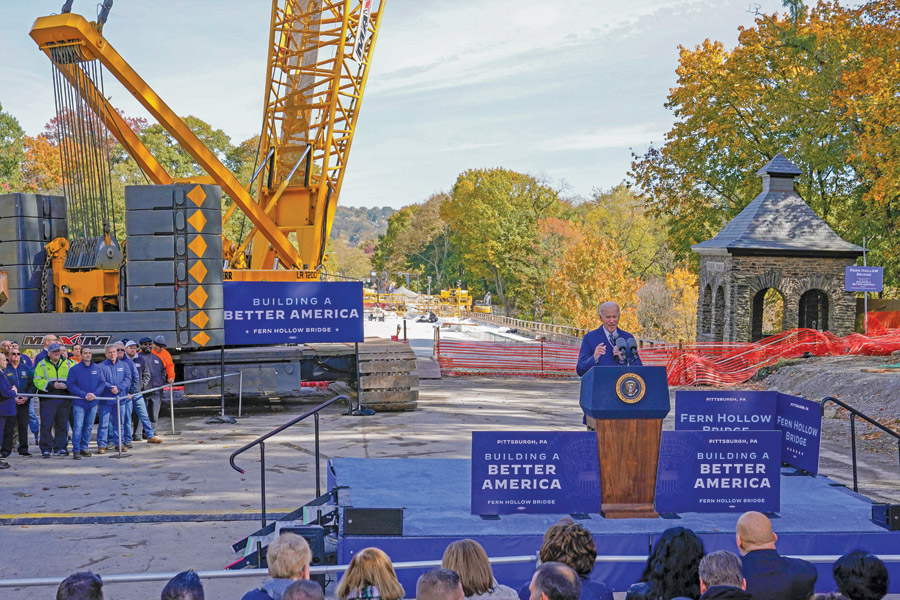 Scheduled to speak in Pittsburgh just hours before the collapse on Jan. 28, President Joe Biden visited the Fern Hollow Bridge site. He returned on Oct. 20 to speak about his infrastructure agenda.
AP Photo/Patrick Semansky

As HDR evaluated and refined replacement options, Swank provided feedback on equipment availability and cost and lead times for critical materials. Some design decisions were driven by convenience, such as basing the support piers’ 8-ft-dia columns on formwork and tooling readily available in Swank’s inventory. “We strived to make conservative estimates without being unnecessarily restrictive,” Fuller says.

“We just needed to do this really quick, and it’s unbelievable how well we worked together to make decisions in a timely manner. Everyone was on board to make it happen.”
—Jason Fuller, Project Manager,  HDR

Having input in the design process also enabled Swank Construction to shape its procurement and erection strategy. The firm was already familiar with the location, having worked with federal investigators to stabilize rubble and extract materials for analysis.

While self-performing capabilities would prove to be an advantage, Swank project manager Chad Basinger says the team still faced the obstacles of industrywide shortages and supply chain disruptions.

“There were tiers of early lead time items, with the longest being beams and railings,” Basinger says. “Everyone knew we were on the same page literally and figuratively and that we were going to move at that step, including getting permission to order rebar early.”

As for other materials, Swank often had to look beyond its regular vendor network, “but we mostly got what we ordered,” Basinger adds. 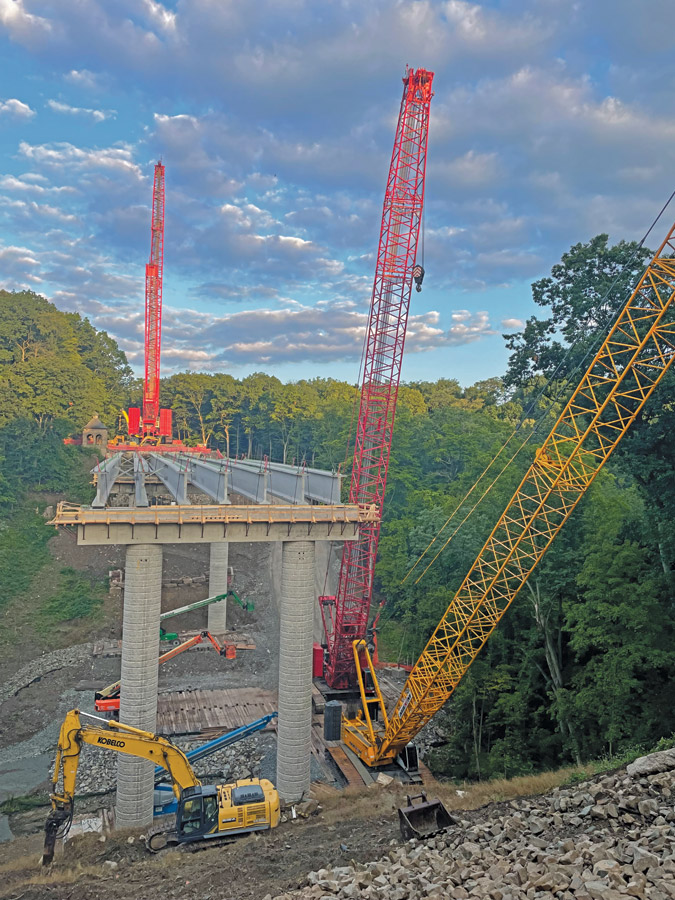 Five days after design drawings were approved on May 4, caisson drilling got underway for the bridge’s two support piers, positioned to preserve the ravine’s stream and recreation paths. Each pier consists of two round 64-ft-tall columns founded on 17-ft to 20-ft-deep 8.5-ft-dia shafts supported by 14-ft to 17-ft-deep 8-ft-dia rock sockets. Clad with a stone pattern formliner, the columns are topped with 7.5-ft by 8.6-ft pier caps across the bridge’s width.

While most of the 1970s bridge was lost in the collapse, its abutments and wingwalls, plus those from its turn-of-the-century predecessor structure, have been preserved for cost, aesthetic and right-of-way reasons, Fuller says. New 13-ft-tall, 5.5-ft-wide integral abutments are installed approximately 8 ft behind the original bridge’s centerline on a single row of piles drilled 64 ft below grade and concreted into place similar to a rock socket. Use of drilled piles minimized noise and potentially harmful vibrations to the historic gatehouse and existing abutment.

Because the depth of the beams made the integral abutment exceed PennDOT standards, Fuller says, “the details were enhanced in conjunction with the agency’s chief bridge engineer who had to approve the non-standard design and details.” 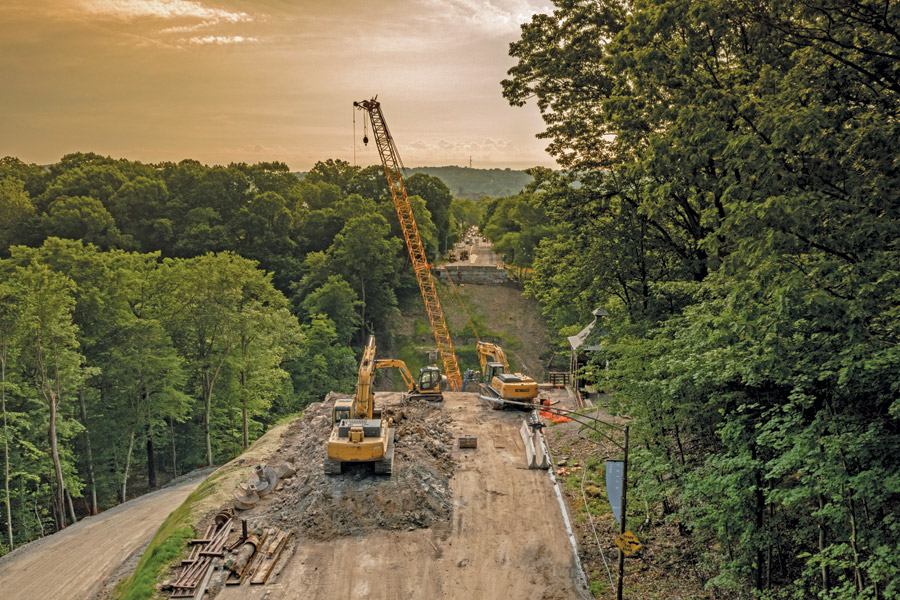 Probably the biggest coordination challenge was delivery and installation of 21 4-ft-wide, 8-ft-tall bulb-tee beams—seven for each span—each weighing 110 tons, making them the largest in western Pennsylvania. To transport two beams a day from fabricator Pennstress in Roaring Spring, Pa., the project team worked with state police to chart a circuitous 90-mile route with sufficient capacity to handle the combined weight of each beam and its delivery truck and to determine when the truck should travel to minimize disruptions to traffic.

“Of course this was a special situation that we’d rather not have happen very often, but the project also provides a lot of lessons of how you can do those things and make decisions quicker.”
—Cheryl Moon-Sirianni, District Executive, PennDOT

Fourteen of the beams were delivered to the bridge’s west side via two university campuses and Frick Park, while the remaining seven were hauled up the mile-long improvised “parade route” from I-376 to the east side. Swank hoisted the beams into place using Manitowoc MLC650 and MLC300 cranes, rigged for 770 tons and 350 tons, respectively.

With the superstructure in place, the 8-in.-thick concrete deck was placed in three continuous 300-yd pours. Swank is also upgrading the bridge approaches to meet city standards, with full-depth pavement replacements consisting of 4 in. of asphalt placed atop 10 in. of reinforced concrete on 8 in. of subbase.

To allow the new bridge to meet its targeted late-December opening date, installation of a 1-in.-thick deck overlay takes place when weather conditions permit, but it won’t delay the planned late 2022 partial opening. Swank will also perform site restoration work, including scaling back a 400-ft-long path initially carved along the ravine’s up to 30% slope to access collapse debris and later widened to accommodate cranes and other large equipment. The scaled-back path will provide more convenient access to the ravine for smaller maintenance and emergency response vehicles. 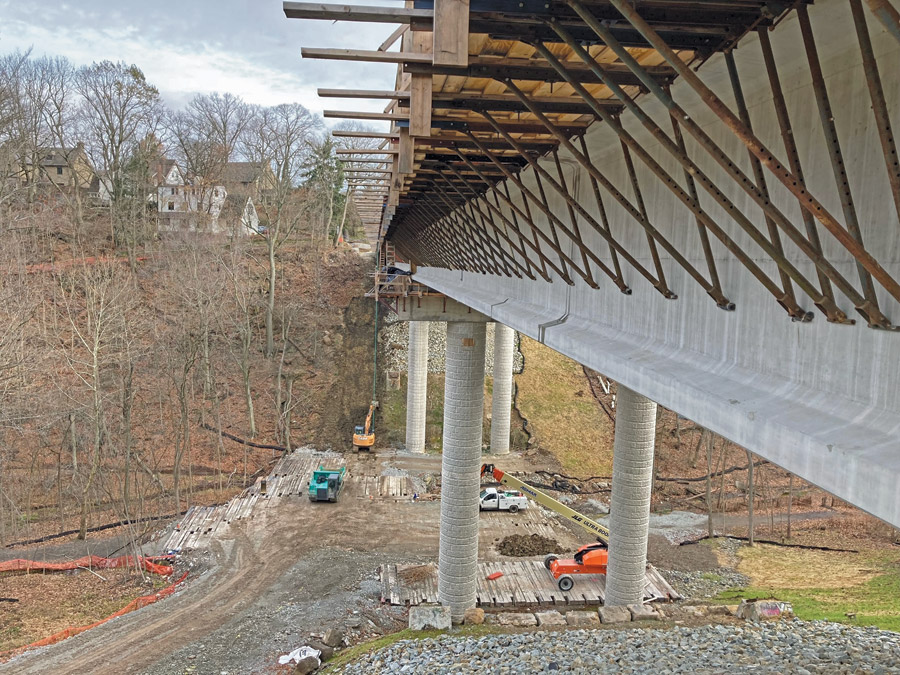 The bridge’s three-span arrangement accommodates the stream and trails underneath.
Photo by Jim Parsons for ENR

Swank will also complete approximately $550,000 worth of safety improvements that have been added to the project at the city’s request and are being funded separately from the bridge replacement. They include installation of a signalized pedestrian and cyclist crossing in the western bridge approach, eliminating a long-standing hazard for motorists and park users.

PennDOT’s Moon-Sirianni says that the agency is frequently asked by the public why all its projects can’t be done this fast.

“Of course this was a special situation that we’d rather not have happen very often,” she says, “but the project also provides a lot of lessons of how you can do those things and make decisions quicker.”