Collins Electric, California Specialty Contractor of the Year, has rebounded from the pandemic downturn and has plans for a bigger future

For almost a century, Collins Electric Co. has been a stalwart presence in the Golden State. The Stockton-based company built a reputation working on banks, dams and power plants in the 1920s and today makes its mark with multimillion-dollar water treatment plants and solar projects.

testament to the company’s resilience and dedication has been the way it has battled through the recent pandemic and economic slowdown. The turmoil that roiled the industry in 2020 battered the company’s bottom line. Its year-to-year revenue plummeted by almost a third in 2020 to $125 million.

The turnaround has been just as dramatic. Collins’ 2021 revenue reached $174.1 million, almost completely recouping the total from two years prior. According to the firm, revenue is on track to exceed $250 million for this fiscal year end.

“Currently, Collins Electrical is in a tremendous growth phase,” says Craig Gini, Collins’ chief transformation officer and one of three Gini brothers running the company. “With the emergence of big box distribution facilities, water treatment plants, entertainment and renewables, [the company] is experiencing expansion beyond our previous expectations.”

Collins’ resilience and ambitious plans to increase its reach in the future are a key reason the firm has been named ENR California’s Top Specialty Contractor of the Year. 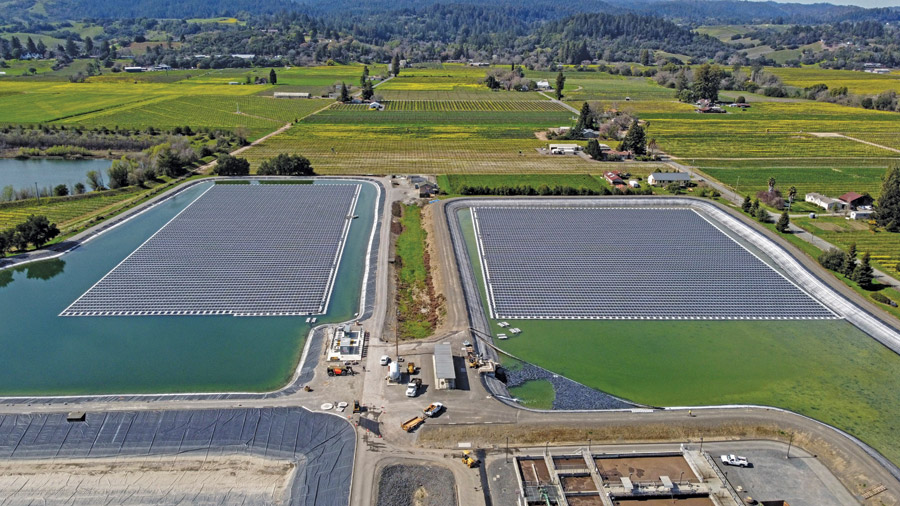 Collins is active in the growing renewables sector in California, working on such projects as the Healdsburg floating photovoltaic solar array.
Photo courtesy Collins Electric

Today, the company employs more than 500 people in Northern and Central California, where it has locations in Dublin, Fresno, Marina, Modesto, West Sacramento and Stockton. The team has been busy with an array of projects across the state.

On the Stockton Wastewater Treatment Plant, which will complete next spring, Collins is serving as electrical, instrumentation and controls specialty subcontractor for the AECOM/WM Lyles Co. joint venture. The progressive design-build project is upgrading and renovating a more than 70-year-old plant for the city of Stockton.

Charlie Randolph Jr., senior design-build construction project manager, says Collins has been an instrumental partner in the design and construction of this complex project and has been “solution driven when facing tough challenges associated with the modifications of an existing operating treatment facility.” He says the Collins team frequently participates in brainstorming, problem-solving and issue resolutions to resolve challenges associated with a legacy 1950s facility—all while maintaining plant process operations.

Throughout work on the process plant, the upgrade of the facility’s electrical main plant switchgear (MPSG) was required, along with multiple system shutdowns to install new equipment. Critical planning sessions, reviews and workshops were conducted.

When a new backup power generator system with automatic transfer was required as part of the scope of work, the Collins team worked to find the best solution. They researched available options and helped include an additional motor control center (MCC) section in the system.

“That allowed for a much smoother integration of the generator system into the existing MPS MCC line, reducing the quantity of disruptive plant shutdowns,” says Randolph.

ForeFront, a developer of solar and energy storage solutions for commercial, industrial, public sector and community solar customers, has employed Collins as their engineering, procurement and construction (EPC) firm on dozens of projects over the years, including more than a dozen currently under construction.

On a recent innovative solar project atop a multi-level parking garage, the team discovered that the customer’s garage build plans, designed by a third party, didn’t include necessary infrastructure to support the solar arrays. The Collins team collaborated closely with ForeFront and the client to help meet construction milestones and reduce delays.

“In the solar design phase, Collins collaborated closely with us and the customer on design solutions to beat key construction milestones, resulting in minimal to no delays for the install,” Roberts says. Collins’ input led to an approach that allowed the attachment of the project support beams to the garage structure in a way that allowed work in electrical conduits without having to cut into newly poured concrete on the top level of the garage.

“This is one instance among many in which Collins’ knack for problem-solving has supported a project that makes our team and customers proud while saving the customer money on electricity bills,” he adds. 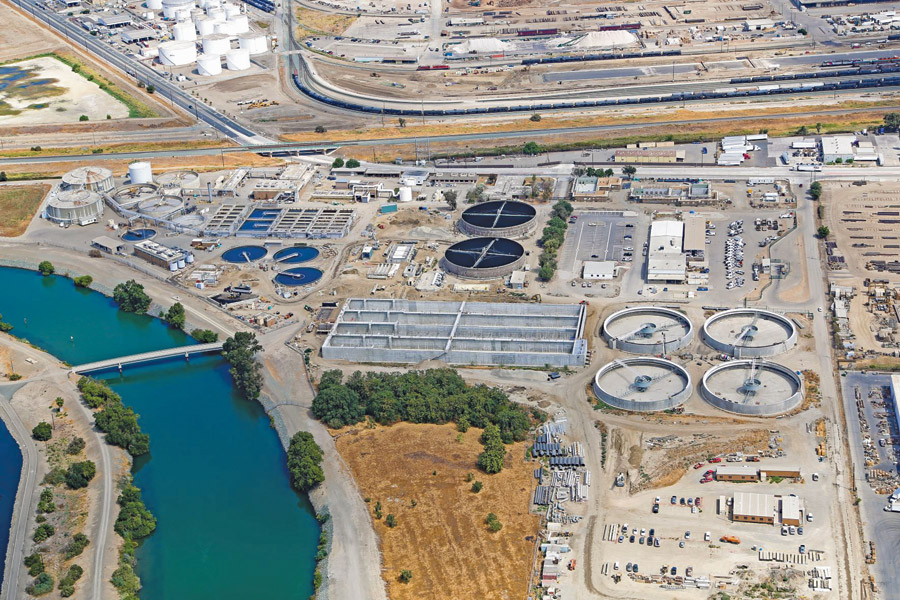 Collins is the electrical, instrumentation and controls specialty subcontractor on the renovation of the Stockton Wastewater Treatment Plant.
Photo courtesy Collins Electric

Planning for the Future

Reliability has been a key element of the firm’s success, but so has diversification, explains Brian Gini, co-CEO of Collins.

“While many contractors specialize in one segment of the construction industry, we have been fortunate to have a variety of projects that has allowed our people to handle a diverse entrée of projects, from traffic signals to renewables to small/medium projects to major developments,” he says.

To help stay active and competitive, Collins in 2019 hired consultants Leading North Advisor to help the firm through its lean transformation. Three years into the effort, the firm is seeing exponential growth. Collins has seen 124 of its employees go through a leadership development program that worked hand in hand with lean principles, resulting in staff who are now able to spot waste, solve problems and create more efficient solutions.

“We have dedicated ourselves to infuse lean learning and lean principles into our company, as we want to ensure the next generation has a head start on driving the company forward,” says Brian Gini, “and we will continue to invest in our people, through leadership development to simple SOP [standard operating procedures] training to unify and create more internal efficiencies.”

The key is retaining momentum to take advantage of opportunities when they appear. While some industry forecasts have set a dour tone, he says business remains solid in his company’s coverage area.

Renewables, for one, are likely to remain as one of hottest sectors for Collins right now due to extension of the 30% federal incentive tax credit through 2033. Renewables is a growing segment for Collins, and the company has been in this sector since the 1970s, when they were first contracted by UC Davis to explore the benefits of solar power.

“Since then, we grew in the medium-size renewables sector, such as carport and rooftop solar, and now battery-storage and EV charging stations, which is in its infancy in California,” says Brian Gini.

“Keep in mind, only 2% of California cars are EV, and if the Legislature is going to stand by their commitment, significant EV infrastructure and onsite EV stations will be as popular as the casual gas station on every corner in California,” he says. “Thankfully we are in the electrical business and not a different specialty trade. Technology and environmental issues continue to drive our industry.”

Craig Gini says the company has installed more than 180 megawatts of solar as an EPC and BOS (base operating support) contractor and “our partners understand the value of battery energy storage systems along with photovoltaics and EV car charging systems as a means to achieve and attain our customers’ sustainability goals. We know that this is the future, and we have built our renewables department from five people only three years ago to 12 people, and we are looking to hire more skilled PMs and engineers.”