Best Projects | Project of the Year

Submitted By: McCarthy Building Cos.

From the get-go, the members of the team that created Tempe’s $192-million Rob & Melani Walton Center for Planetary Health at Arizona State University had their eyes wide open. They were aware of the challenges of a site located at the busiest intersection in Arizona. They knew that being sidled up against an active light rail system would limit the work window—especially for cladding—on that side of the building. They expected to go to depths to bore a utility tunnel under both the tracks and an existing irrigation canal. And from the very beginning of the project, the team was aware of ASU’s ambitious operational and embodied carbon reduction goals for the 281,000-sq-ft research building, intended as a showcase for sustainability and climate programs.

But it never occurred to anyone at the outset of the job, completed last December on budget and ahead of schedule, that to meet ASU’s sustainability goals for construction materials, the team would end up paving a path for reducing embodied carbon in concrete structures—a path other building teams might consider following.

ASU set planetary health, including reducing the negative impact of buildings on the environment, as a grand theme for the five-story project. The triangular-in-plan office, classroom and laboratory building with an open-air central courtyard superseded its goal of LEED V4 certification and is on track for Platinum status. 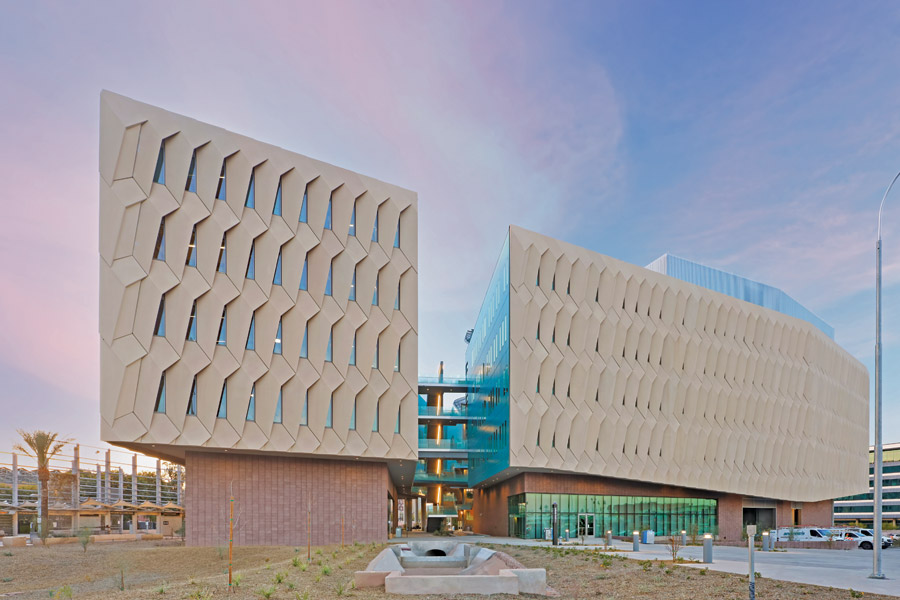 ASU views the building both as a gateway to the campus and an example for future sustainable projects.
Photo by CDP Commercial LLC

Among its novel sustainable features are a system—dubbed a mechanical tree—to capture carbon emissions and a biome in the courtyard filled with plants that purify waste air and water from the canal that is recycled using natural bio-based methods. The skin has glass-fiber-reinforced precast concrete panels that shade the windows and reduce heat gain and the heat island effect.

The deep dive into shrinking the concrete’s carbon footprint began in 2018, when few had heard of embodied carbon reduction. The team effort was inspired by a life-cycle analysis of greenhouse gas emissions that revealed that the structure’s embodied carbon—emissions associated with extraction, manufacturing and transport of materials—was greater than ASU’s goal. 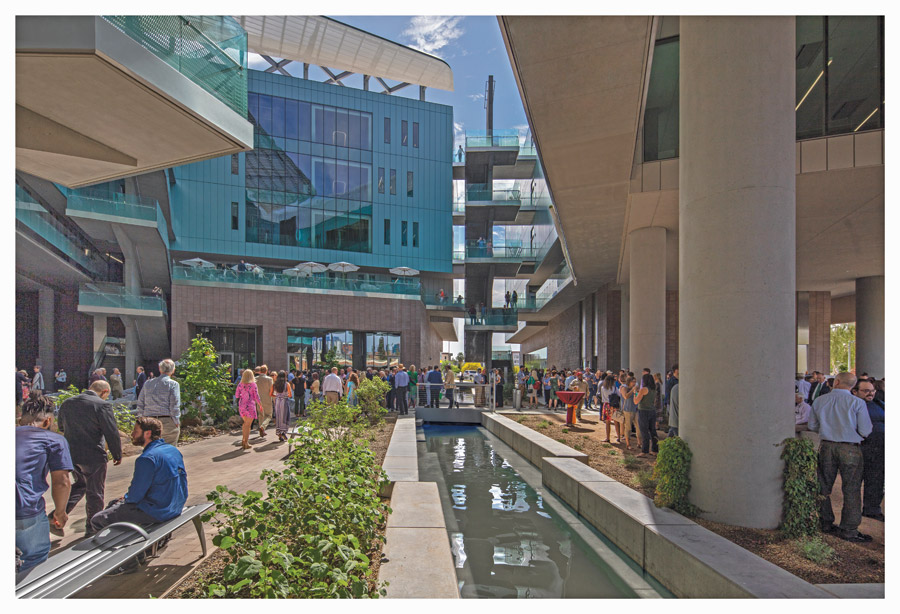 The courtyard features plants that purify waste air and water from the adjacent canal that is recycled using natural bio-based methods.
Photo by Bill Timmerman

“A lab building really needs to be a concrete frame, and concrete has a pretty big [carbon] footprint,” says Tom Reilly, a principal of Architekton, the project’s co-lead architect with Grimshaw. 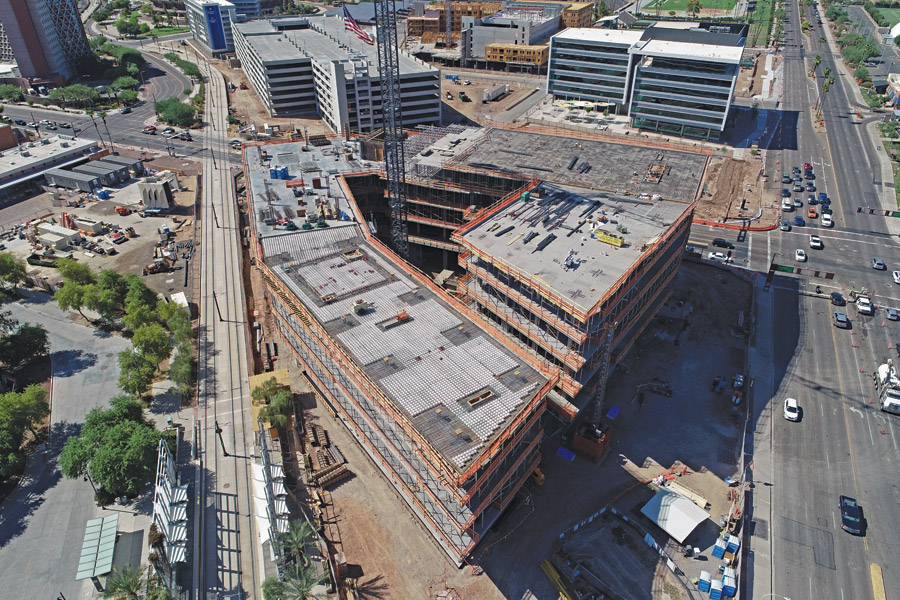 Construction was complicated by a site that faces the state’s busiest intersection and has a light rail system along one side. Only the south wing (on the lower left of the triangular footprint) has voided slabs.
Photo courtesy of McCarthy Building Cos.

For slashing carbon in the concrete, structural engineer Buro Happold (BH) wrote a performance specification for a 40% reduction in cement. Construction manager at-risk and general contractor, McCarthy Building Cos., which self-performed concrete work on the $153-million job, elected to meet the spec using fly ash.

That choice came with challenges. High fly-ash mixes are stickier, which can affect pumpability. And fly ash is black, which creates a marbled finish on exposed surfaces that is often spurned by architects. 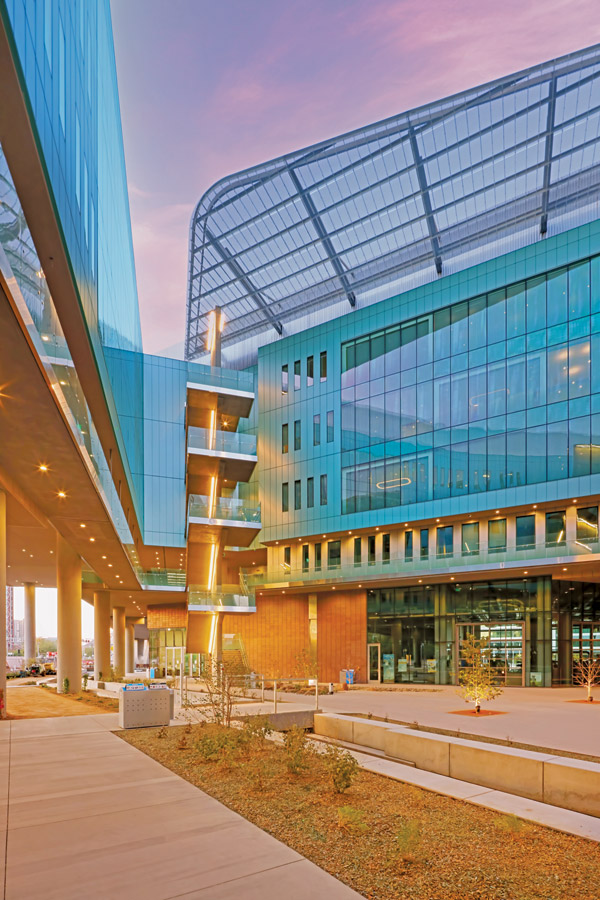 The courtyard also serves as a pedestrian route through the building and into the campus.
Photo by CDP Commercial LLC

To work out the kinks during design development, McCarthy tested multiple mixes from suppliers for three months before selecting Hanson Ready Mix Inc.

Fly ash is available now, but as a by-product of burning coal, “it’s not necessarily a long-term solution,” cautions Diaz. Supply may diminish as cleaner fuels replace coal.

The two-pronged attack—fly ash and voided slabs— reduced the concrete’s embodied carbon by 40% and its volume by 1,300 cu yd over the initial design. “We accomplished something amazing by combining elements in a way not ever done before,” says Diaz.

That could not have happened without a design team that included McCarthy from Day 1, says Reilly. ASU first assembled the players in December 2017, under a separately contracted project definition phase.

During that period, the core team, including McCarthy, confirmed the program, site, identified major issues, aligned the program with the budget and more. Schematic design began in April 2018.

Voided slabs incorporate a grid of air-filled voids, in this case 13-in.-dia “bubbles” made from recycled plastic, that displace concrete in areas where the material is not needed. The technology, used to lighten the weight and material volume of flat-plate decks, has “been around for decades,” says Stephen Curtis, the BH principal who proposed the strategy.

BH had used voided slabs before to reduce slab weight. But McCarthy and Architekton had no history with the technology, which has impacts on design, budget, trades, sequence and schedule. The system is not common in the U.S. and had never been used in Arizona.

To move forward with the voided slabs, “there had to be full team consensus.”
—Tom Reilly, Architekton

When BH proposed the idea, “there was healthy skepticism” on the part of the core team members, including the owner, says Architekton’s Reilly.

Even with careful vetting of potential impacts on budget, constructibility and schedule, it took “a leap of faith” to embrace the approach, adds McCarthy’s Diaz. But he says McCarthy supported it because “we see it as a benefit to the client and to the local and regional market.”

For BH’s Curtis, the idea was “one of those light-bulb moments.” Still, there were adjustments associated with the system, even for the structural engineer. The voids affect the slab’s long-term behavior and strength characteristics compared with a conventional slab, so the approach must be considered early in the design process and analyzed carefully, says Curtis.

Voided slabs are thicker, in this case by 2.25 in., than conventional decks. That also had to be taken into account because only the south wing has the voided-slab system.

There are advantages. The reduced weight of the deck translated to smaller structural members, freeing up more usable space and saving money. And BH “chased the savings to the foundations,” which required less material, says Reilly.

Before embracing BH’s idea, McCarthy interviewed construction firms with voided-slab experience and researched the two U.S. suppliers of void forms, each with its own proprietary technology. Extra time on the part of the general contractor, folded into the design phase, is needed to bid the contract to the void form supplier, early enough for the chosen supplier to source the recycled plastic and set up an operation as close to the site as possible to prefabricate the void forms, which consist of grids of bubbles separated yet connected by steel mesh.

After due consideration, McCarthy, ASU, Architekton, Grimshaw and BH signed off on the idea. To move forward, “there had to be full team consensus,” says Reilly.

the system was strategically incorporated into about 50% of the building’s slabs, primarily in the south wing, which mostly contains offices. Labs need heavier slabs because of higher vibration requirements. 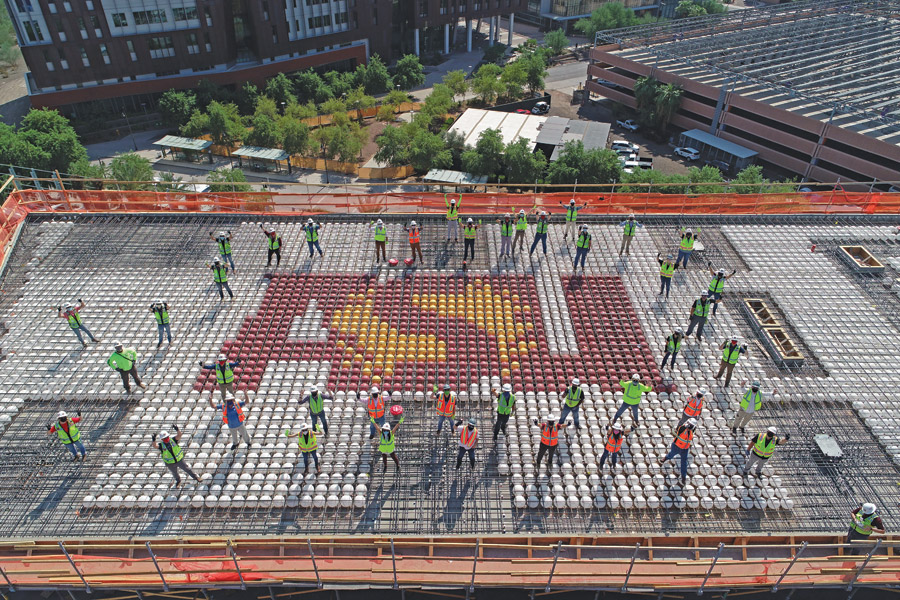 The voided-slab system, which reduces the weight and volume of concrete in the deck, consists of a grid of hollow balls made of recycled plastic.
Photo courtesy McCarthy Building Cos.

On balance, the voided deck netted “about a zero cost premium” over a conventional deck, says Diaz. The expenses of the proprietary form system and labor for a few extra steps in the construction sequence were canceled by the savings in material.

Reilly says the increased column spacing in the voided-slab south wing—climbing by 50% to 36 ft 9 in.—made a big difference cost-wise.

Voided slabs are cast in two lifts to keep the buoyant bubbles in position. That adds another day to the floor schedule. McCarthy made up the time primarily by adding another shift to column and wall production. All in all, the entire structure topped out in 10 months instead of the 12 months scheduled, says Diaz.

Following a layout plan, crews then installed the BubbleDeck forms, picking them by crane onto the deck.

Workers would then remove the BubbleDeck forms, which had arrived in 20-ft by 10-ft panelized sections, in areas where a solid slab was needed, for example around vertical members and at mechanical penetrations. They then placed mechanical sleeves and inserts.

After that, crews would install the top layer of rebar, which rests on the steel mesh between bubbles. The installation was then inspected.

Starting at midnight, crews began pumping one-third, or 4 in., of the mix to lock the bubbles in place. Their buoyancy made placement “tricky,” says Diaz.

Crews cast the second lift within 24 hours. Diaz says that after crews went through their first full cycle of voided-slab construction, “it felt like traditional work.”

McCarthy says it would use the system again for a project with sustainability goals. It even brought a BubbleDeck form to a job interview in Denver. “We are now analyzing the system for use on that project,” says Diaz.