Plenty of Reason for Contractors to Celebrate on Jacksonville's Bicentennial

Jacksonville is celebrating its bicentennial in 2022, and for contractors like Haskell, there’s a sense of increasing development activity heading into the city’s third century, says Dave Auchter, vice president with Haskell.

That momentum is being fueled by a growing multifamily sector that ranks among the fastest-growing in the U.S., both in new units delivered across the city, its 96% occupancy rate and an estimated 27% rent growth through the first quarter of 2022, according to Moody’s.

An influx of millennials are discovering Jacksonville’s comparatively low cost of living, the area’s demand for young professionals and its quality of life, among other factors, Auchter says.

The entire Metropolitan Statistical Area for Jacksonville, anchored by Duval County, is seeing unprecedented growth along the Interstate 95 corridor, he says, from St. Johns County to the south and Nassau County to the north. Clay County is growing too, as the First Coast Expressway is set to connect Interstate 10 and I-95 through the county. 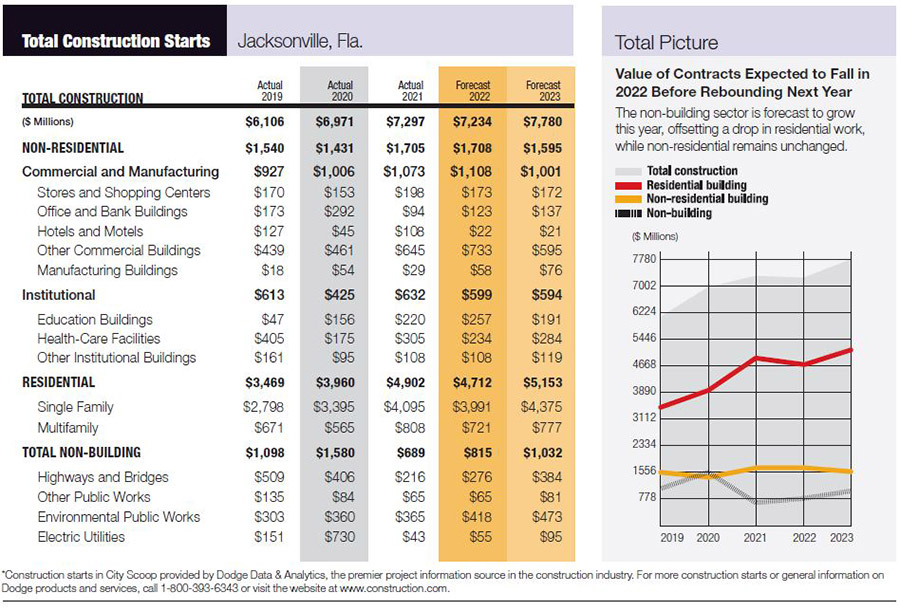 “With so much growth happening in different corners of the largest city by land mass in the continental U.S., infrastructure will continue to be tested,” Auchter says.

Jacksonville leaders agree that the community is at an inflection point, he says, where the significant number and scale of urban projects over the next few years will create a true downtown destination neighborhood with abundant multifamily housing, retail and cultural amenities.

Mayor Lenny Curry is in the final year of his second and final term, Auchter says, after having championed significant issues like clearing prime city-owned parcels that had become functionally obsolete and setting a $1.55-billion 2022-23 budget to continue investment in infrastructure, public safety and urban redevelopment. 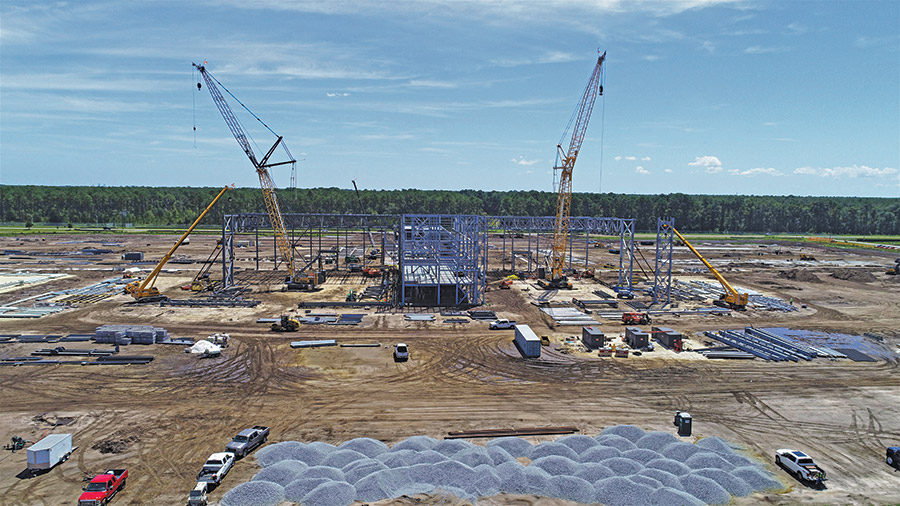 The $173-million Jacksonville Aviation Authority Boeing MRO Hangar is under construction by Haskell in Jacksonville, set for completion in 2023.
Photo courtesy Haskell

Atlanta-based Fuqua Development and Miami-based Related Group are entering the Jacksonville market, he says, with signature mixed-use developments downtown. In addition, the Jacksonville Jaguars are well into construction on a new $120-million Performance Center in the stadium district, paving the way for significant renovation to TIAA Bank Field.

As ENR previously reported, the Jaguars are underway with their $330-million effort to transform a vacant shipyard in downtown Jacksonville into a 450,000-sq-ft Four Seasons Hotel adjacent to TIAA Bank Field and a 135,000-sq-ft, six-story office building on just under 5 acres.

Other large downtown commercial projects that Auchter notes are in their final phases include a $145-million headquarters for fintech leader FIS and a $72-million build-to-suit headquarters for the Jacksonville Electric Authority.

But Jacksonville’s market isn’t immune from material volatility in both pricing and availability, he says, and a tight labor market continues to impact the construction community.

Material pricing has largely stabilized recently and in some cases dropped, Auchter says, but those gains are being offset by increasing costs of freight because of global fuel prices.

“Despite some challenging market conditions, Jacksonville has a very strong construction community of primes, subs and vendors who continue to deliver projects in residential, commercial and industrial sectors,” Auchter says.