Southeast On the Scene: September 2022

Architecture and engineering firm Goodwyn Mills Cawood (GMC) recently celebrated the relocation of its Huntsville, Ala., office to a renovated space in the heart of downtown, at 117 Jefferson St. North. The new office is located in the historic Struve-Hay Building, originally constructed in 1900, an important piece of the city’s architectural history. In designing the office, GMC’s architectural team brought new life into the historic building while maintaining as much of the original structure as possible. The office space was designed to be a large, open-plan studio to enhance collaboration among team members. It also features open conference areas, a large conference room and smaller huddle rooms. “We’ve been a part of the Huntsville community for many years, but we truly feel this move downtown represents a new era for our firm here,” says Jeffrey Brewer, CEO of GMC. “Huntsville has boomed over the last few years, and we’re thankful to have even a small part of some of the progress that’s happening here, with projects like the new city hall, just a few blocks away from our office, Buffalo Rock’s new distribution facility, the Lockheed Martin missile facility and many more. We hope to continue to be part of the positive momentum that’s happening here in our community.” 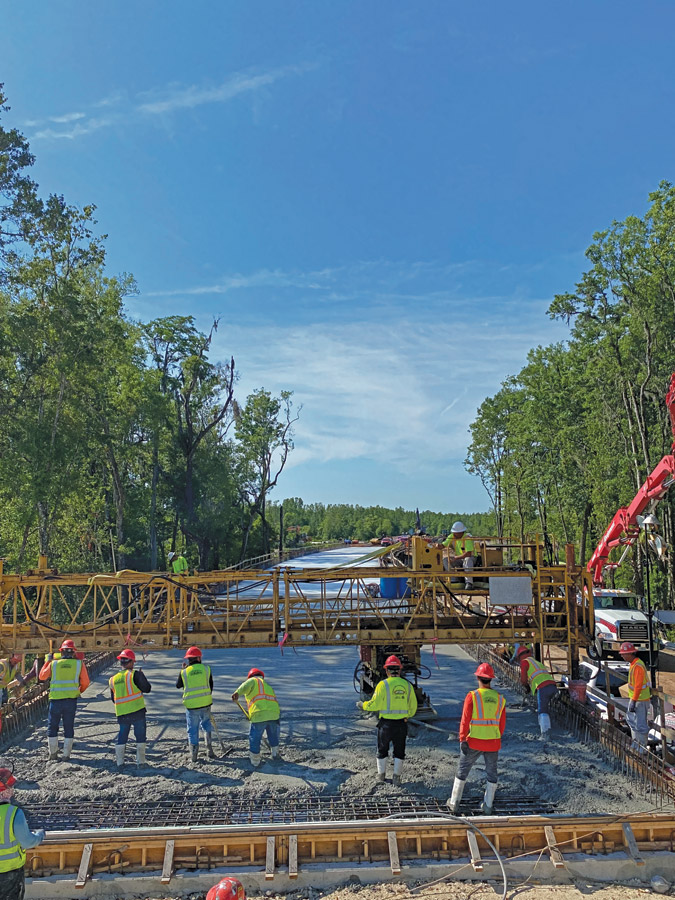 Infrastructure contractor Superior Construction is constructing the Sunlake Boulevard Extension, a 17-month, $39-million project tied to the Angeline master-planned community. The extension will traverse 3.2 miles of greenfield wetlands to create an interchange with eight bridges starting 0.6 mile south of SR 52 and extending 0.9 mile south of Ridge Road in Pasco County, Fla. The eight bridges will allow Superior to avoid mitigating the wetlands through which the extension flows. The bridges are 5 to 8 ft off the ground, founded on highly variable geology. Superior is using an access road consisting of a geotextile fabric-wrapped embankment reinforced with geogrid to allow crew and equipment access through the wetlands while minimizing the impact on the sensitive environment. Construction is expected to be completed in February 2023.

“The Sunlake Boulevard extension is the first step in creating the necessary infrastructure and critical utilities for business entities in the surrounding area, including the forthcoming Moffitt Cancer Center’s Pasco Life Sciences Campus,” says Matt Stuart, Tampa area manager at Superior Construction. “The campus will bring a boon of economic development for Pasco County, and we are proud to be taking on a project that will help generate additional jobs for the area.” 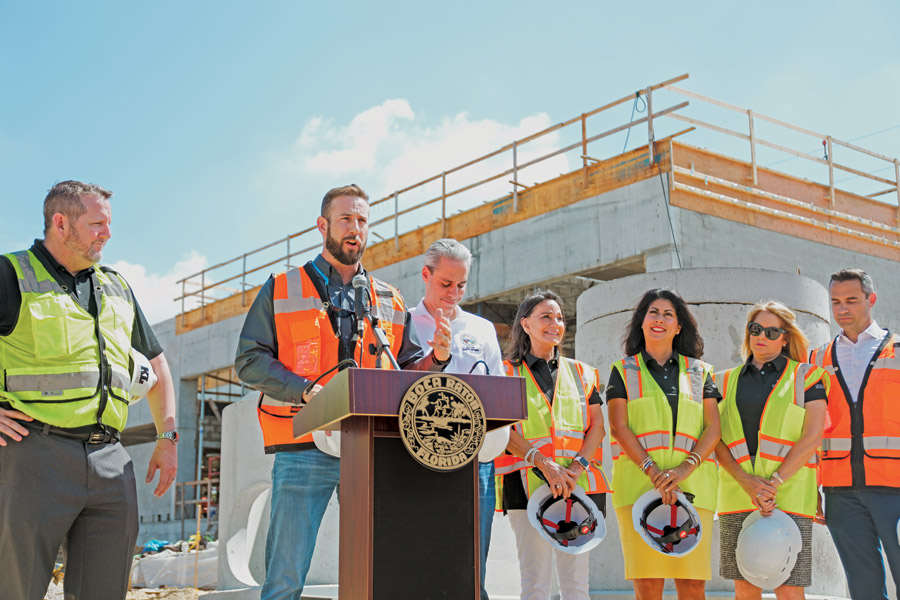 Private passenger rail line Brightline and contractor Kaufman Lynn topped out its Boca Raton, Fla., station and parking garage Aug. 16 at 101 NW 4th St. The president of Brightline, Patrick Goddard; the president of Kaufman Lynn Construction, Chris Long; Boca Raton Mayor Scott Singer; and other city council members celebrated the milestone, which marks the completion of vertical and structural work as the project’s focus now shifts toward completing interiors. Once complete, the station will be Brightline’s fourth in Florida, connecting Boca Raton to Miami, Fort Lauderdale and West Palm Beach. A partnership between Brightline, Boca Raton and the Federal Railroad Administration, the 22,000-sq-ft station will include lounges and a platform for boarding the train. A 455-space parking garage will service Brightline’s station and the city’s library. “Our construction teams are working across South Florida and throughout the state to connect Florida like never before, and we can’t wait to connect to Boca,” says Goddard. “Boca, which has become a hub for technology and innovation, and the new station will allow us to connect visitors and locals to this thriving city with modern, eco-friendly transportation.” 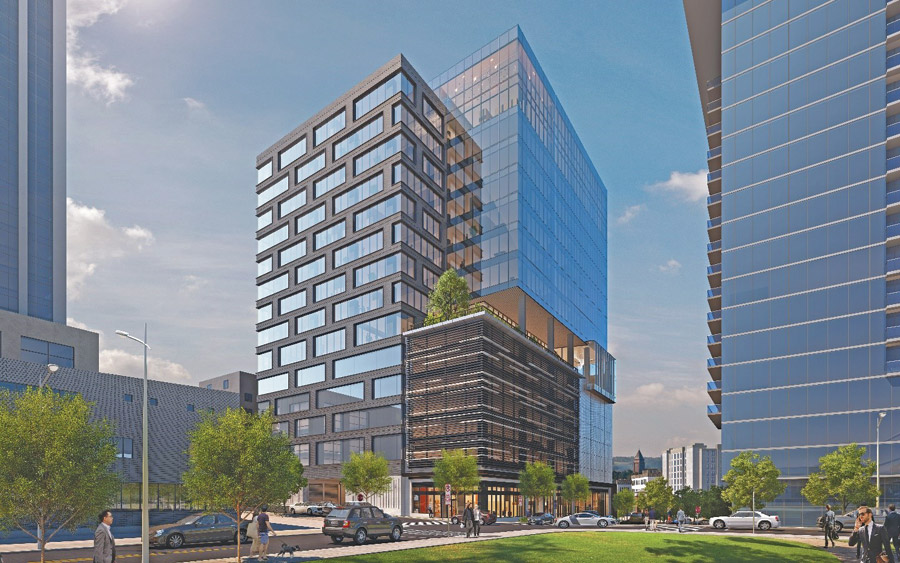 One of the tallest new buildings in Nashville’s Midtown district has reached its highest point. Architect Portman and contractor Hoar Construction celebrated the topping out of the Moore Building, a 16-story office tower, on Aug. 18. The building includes 236,000 sq ft of Class-A office space with 27,500 sq ft of floor place, prioritizing amenities and gathering spaces like a sky lobby that connects to an 11,000-sq-ft outdoor deck, 35-person conference room, tenant lounge and fitness center. On the ground floor, 8,500 sq ft of retail space spills out to the sidewalks. The building pays homage to Scotty Moore, guitarist for Elvis Presley, rising on the former site of Moore’s recording studio, Music City Recorders, and incorporating original memorabilia from Presley and Moore.

“Inspired by the rich history and lively atmosphere of Music Row, we saw an opportunity to create a new link in Nashville’s urban core—one that blends a hospitality-infused work environment with great retail and restaurant experiences,” says Mike Greene, vice president of development for Portman. “Most importantly, we’re thoughtful about ensuring this project seamlessly blends with the culture and original fabric of the neighborhood while also enhancing connectivity in and around Midtown.”

ANF Group Celebrates Topping Out of EDEN West in Florida 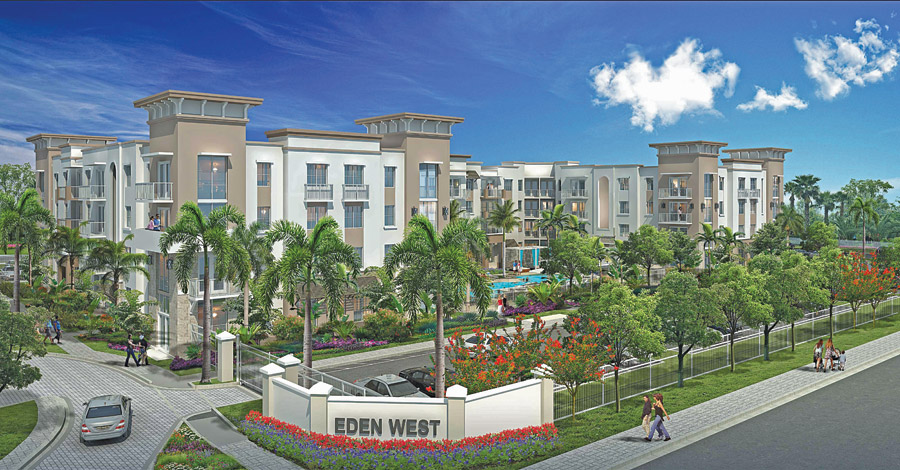 Construction firm ANF Group announced the Aug. 3 topping out of EDEN West, a 212-unit garden-style multifamily development in Tamarac, Fla. The project includes two four-story buildings offering Class-A apartments, a saltwater pool, fitness center, clubhouse and more than 360 parking spaces on the northeast corner of W. McNab Road and Pine Island Road, with close proximity to the Sawgrass Expressway and Florida Turnpike. Developed by EDEN Multifamily’s Jay Jacobson and Jay Massirman and Cypress Equity Investments, EDEN West is expected to be complete in the fourth quarter of 2022. Demand for apartments continues to rise, says Al Fernandez, president of ANF Group, which has apartment communities under construction in South Florida including Madison Point Apartments in Naranja and Natura Gardens in northwest Miami-Dade County, the Legacy at Tamarac and Vista Verde at Sunrise. The firm maintains its health care focus but continues to expand into multifamily, residential and industrial spaces.