Research and entrepreneurship are leading to a biotech boom in North Alabama, where the rapidly growing HudsonAlpha Institute for Biotechnology is constructing new facilities for cutting-edge research in genomics and plant science. In two new buildings—a greenhouse and research facility—nonprofit HudsonAlpha and contractor Brasfield & Gorrie are leaning on past relationships to navigate the process of creating tailor-made structures for highly specialized uses.

On either side of its double-helix walking trail built to resemble the structure of DNA, scientists and students on HudsonAlpha’s campus explore the genomes of people while biotech businesses push the state’s economy into the future.

The latest additions to the campus, two phases of a competitively bid design-build project led by Brasfield & Gorrie that’s set to be complete in June 2023, include a $9.9-million, 14,000-sq-ft greenhouse and a $35-million, 94,000-sq-ft genomic research facility.

“We really wanted to see what they could do on this expansion,” says HudsonAlpha vice president for economic development Carter Wells. “They’re two very different projects, but under one expansion.” 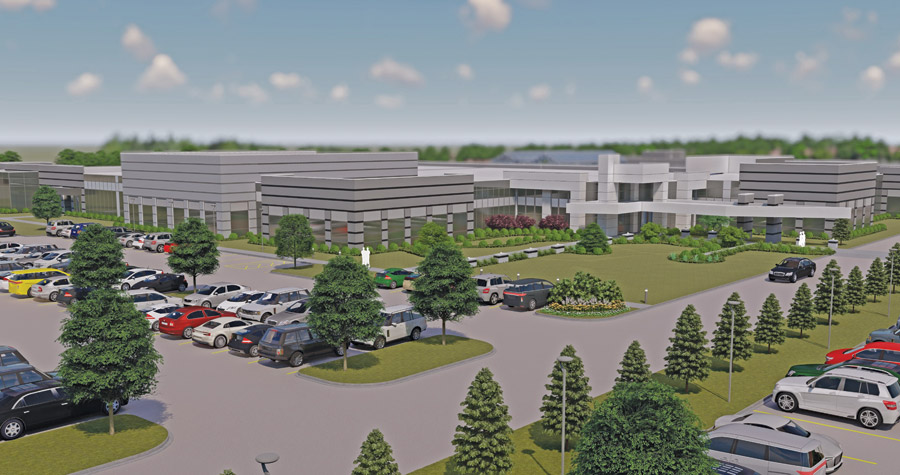 The design of the DLS building had to account for excesive heat generated by genome sequencers and other specialized lab equipment.
Image courtesy Fuqua & Partners Architects

The greenhouse building is tailored to the individual researchers who will be working in the space, Wells says, pointing to Josh Clevenger, who uses genomics to more effectively breed peanuts and to develop better tools and new, rapid breeding practices.

Sam Wolfe, project manager for Brasfield & Gorrie, said the specificity of multiple interior environments presented a challenge. “Most building interiors are conditioned for a comfortable living environment,” he says. “But the greenhouse’s use required an environment that is 90 degrees or warmer and extremely humid with full sunlight and additional high-powered LED grow lights.”

The HudsonAlpha Greenhouse and Education Learning Labs will provide its Center for Plant Science and Sustainable Agriculture with the greenhouse space, but also with education and lab space and open ground in the back to move plants from the greenhouse to the field, Wells says.

Architect Tim Packard with Fuqua & Partners says the firm brought in greenhouse consultant A.J. Lauer for the “very specialized” greenhouse, which requires different spectrums of light in its seven fully customizable and independent growing areas that can each be controlled individually to create seven different environments. 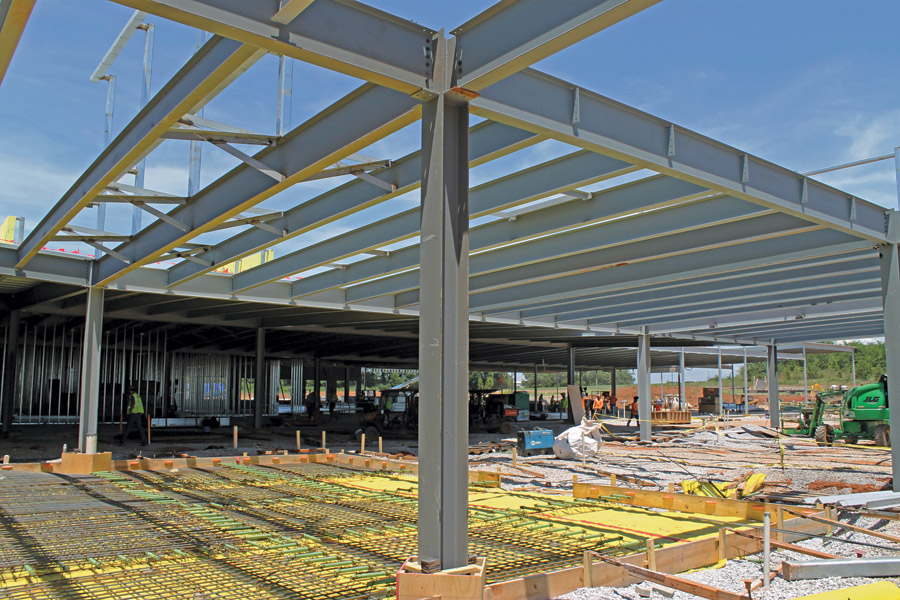 Foundations were reinforced on the DLS building to accommodate heavy, high-density filing systems.
Image by Derek Lacey for ENR

Each piece of electrical conduit and plumbing piping as well as access controls and other related items had to be exterior-grade to withstand the conditions, Wolfe says, and the building’s design required the project team to provide a higher level of trade contractor coordination.

“The greenhouse control system is connected to a multitude of mechanical, electrical and plumbing systems,” he says, naming louvers, evaporative cooling pad walls, shade curtains, lighting, in-slab piping and more. All those work together to give the end user complete control over the growing environment, Wolfe says.

“The greenhouse’s use required an environment that is 90 degrees or warmer and extremely humid with full sunlight.”
—Sam Wolfe, Project Manager, Brasfield & Gorrie

The HEPA filters, for which Brasfield & Gorrie signed a letter of intent before the contract was signed in July 2021, highlight supply chain issues that have added an extra layer of planning to the project.

An expected 10-week lead time for those filters turned into more than 12 months, McCay says, as the German-made filters ran into fabrication issues.

The now common supply chain issues started just as the first phase of this project got underway in 2020, he says, and have led to longer lead times for a variety of materials, including drywall and glass.

“Every material had its own lead-time pushback,” McCay says. “We were able to mitigate that by analyzing what the issues were when we were estimating the job and buying out those subcontracts that had long leads.”

The team had to make some adjustments on the fly, too, like switching manufacturers of roofing insulation and buying and storing flooring in a warehouse.

“We were lucky and fortunate in that case, where we have been able to get hold of things early, and they’re sitting there waiting for us when we need it,” he says. 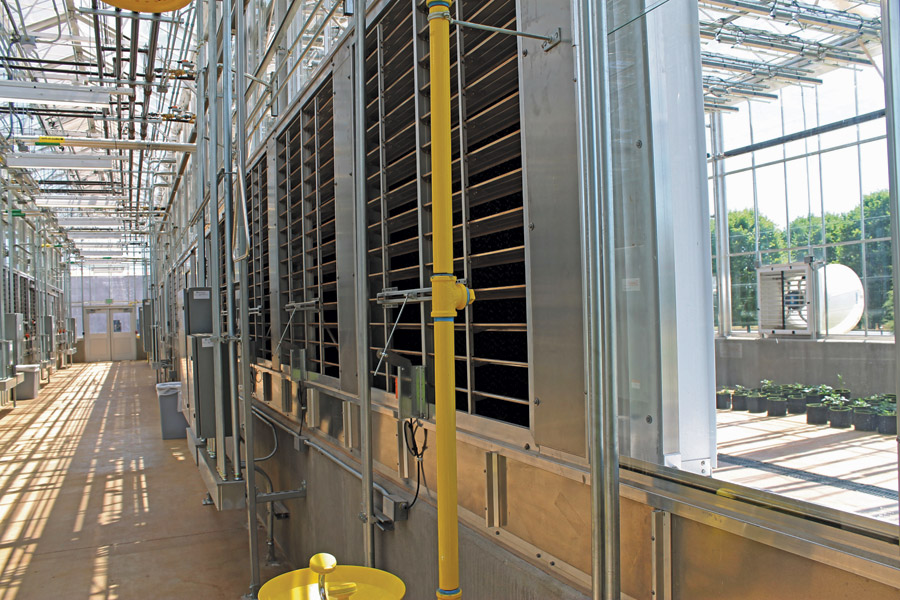 At HudsonAlpha’s new greenhouse and lab facility, each of seven growing areas are fully independent and customizable via sophisticated lighting and ventilation systems.
Photo by Derek Lacey for ENR

The DNA of biotech

Next door, crews recently topped out the different, but also highly specialized facility to house the global headquarters of Discovery Life Sciences (DLS), a worldwide provider of biospecimen analysis, procurement and distribution.

Marshall Schreeder Jr., executive vice president of corporate development, says DLS provides pharmaceutical, biotech and diagnostic companies everything from cells to genomic sequencing services and has been at HudsonAlpha since it opened in 2008.

Discussions about the headquarters building date back to 2019 amid the company’s continued growth and desires to consolidate some of its operations. The company that is now DLS started around a dozen years ago with two employees working in around 250 sq ft in HudsonAlpha’s first building, Wells says. Through mergers and other actions, DLS is now part of a global organization with roughly 20 global offices and 500 employees based in the new building.

“Here in Alabama, there are not too many global headquarters within the life sciences, and it was something we as an institute really wanted to see happen,” he says.

Schreeder says the company is growing rapidly and needs more lab and office space. This new facility will bring their Huntsville operations, now in three separate buildings on the campus, into one location. Instead of walking 100-plus yards to hand off a sample between labs, they’ll soon be able to just take it across the hall, he says.

And from an employee standpoint, Schreeder says the cafeteria, common areas, breakrooms and outdoor spaces are attractive and efforts were made to maximize employees’ access to windows and natural light.

As HudsonAlpha looked to build both the greenhouse and the DLS building, it leaned on relationships with contractor Brasfield & Gorrie and local architect Fuqua and Partners that had already paid dividends.

“We were able to rely a great deal on B&G and others to be able to navigate those waters that we had not gone through before, so that was a challenge just from the type of facility,” Wells says.

The contractor and architect had worked together to build HudsonAlpha’s 100,000-sq-ft Paul Propst Center for Precision Medicine, which opened in 2018.

Design settled on a 33-ft structural bay that worked with the rhythm of an 11-ft lab module, Packard says, calling it key to an efficient layout.

“We have a lot of equipment that puts out a lot of heat. Being able to keep those rooms cool and the HVAC capacity that is required is a pretty significant lift for us.”
—Marshall Schreeder Jr., Executive Vice President, DLS

“We have a lot of equipment that puts out a lot of heat,” Schreeder says. “Being able to keep those rooms cool and the HVAC capacity that is required is a pretty significant lift for us.”

Liquid and vapor-phase nitrogen will be piped into the building from an external tank, he says.

Those precast walls, manufactured in Opelika, Ala., and trucked to the jobsite on an as-needed, just-in-time basis, are one of Brasfield & Gorrie’s “schedule helpers,” McCay says. They’re made in a controlled environment not subject to weather delays, and the timed delivery means crews can keep pouring footings right until the wall is lifted into place.

The ready-to-develop sites on the HudsonAlpha campus also paved the way for construction, he says, with relatively flat sites without many utilities, giving crews space to spread out with materials and focus on the build. Brasfield & Gorrie was able to download CAD files into GPS technology, allowing equipment to adjust the grade automatically.

With most of the walls up by August, the DLS building was topped out in late August as work turns to interiors.

“This is going to be critical for our future growth,” Schreeder says. “This building has everything we need, from cooling, ventilation and backup power to labs designed for our specific workflows and regulatory requirements.”

This is McCay’s first state project, and he says it’s impressive to see the investment Alabama is making in the area, especially in health science. Gov. Kay Ivey announced $15 million toward the project in 2021.

“It’s really rewarding,” says McCay. “It’s a lot different than just building an office building, and once you get involved with the build you want to stay engaged after you leave the jobsite, so I’m definitely going to keep up with Discovery Life Sciences and HudsonAlpha’s research now that I’ve been engulfed in a little bit of what they do.”