Myriad airports across the U.S. are undertaking massive, often multi-billion-dollar construction programs aimed at expanding and modernizing their aging facilities, and that definitely includes the Pacific Northwest region.

In Portland, Ore., for example, crews are planning a nine-acre mass timber roof as part of the $2.15-billion PDX Next project at Portland International Airport’s main terminal. Seattle-Tacoma International Airport, with nearly $4 billion worth of airport projects planned for the next five years, recently opened an 85-ft-tall, 780-ft-long aerial walkway across an active taxi lane. And in British Columbia, Vancouver International Airport’s largest terminal expansion in more than 25 years includes a glassed-in island forest that gives visitors to the expanded Pier D access to open-air nature in the middle of a terminal.

With expansion a constant at the three busiest airports in the Cascadia region, ENR rounds up the current aviation projects wrapping up, just starting or about to begin in the Pacific Northwest. 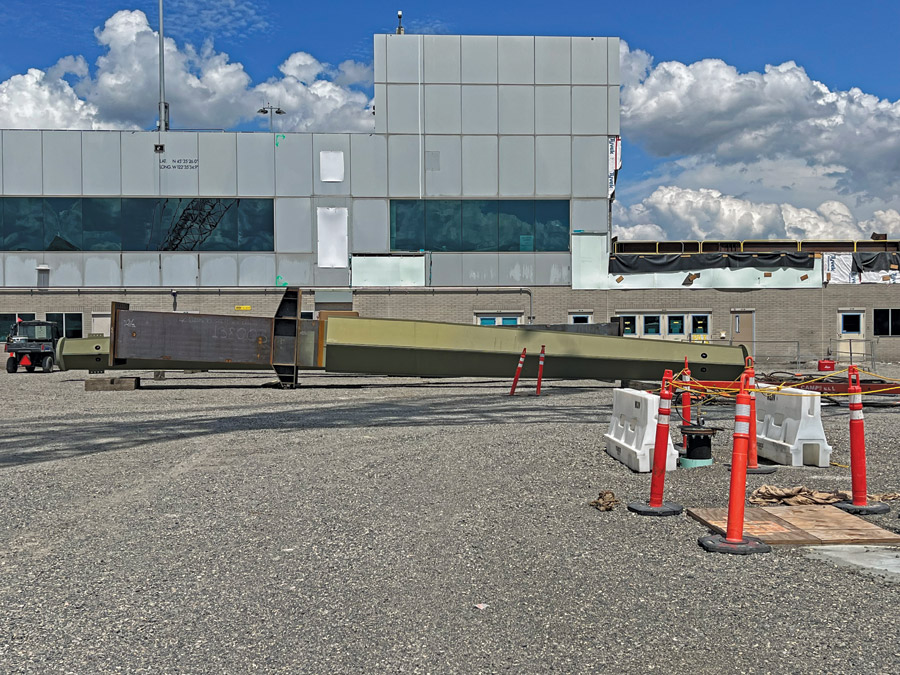 The nine-acre timber roof at Portland International Airport will be held up by Y-column support structures.
Photo courtesy Port of Portland

The new timber roof leads every PDX Next conversation.

To date, the multibillion-dollar PDX Next program has delivered roughly $680 million worth of improvements: a $215-million, six-gate extension of Concourse E constructed by Skanska and designed by Hennebery Eddy and Fentress; a completely redeveloped and expanded Concourse B, a $116-million project built by a Hoffman Skanska joint venture and designed by ZGF Architects; a $282-million flexible transit hub featuring 2,225 close-in parking spots and rental cars built by JE Dunn and designed YGH Architects; as well as a $67-million quick turnaround facility, completed in 2021.

That leaves room for PDX’s new main terminal. This summer, the Hoffman Skanska joint venture will install the first 26 Y-column structural supports for the wood roof and then begin moving roof cassettes—being constructed on site—across the airfield and into place atop the supporting columns. Once the roof is installed by the end of 2022, work on the space below will run for up to 18 months for a mid-2024 completion. 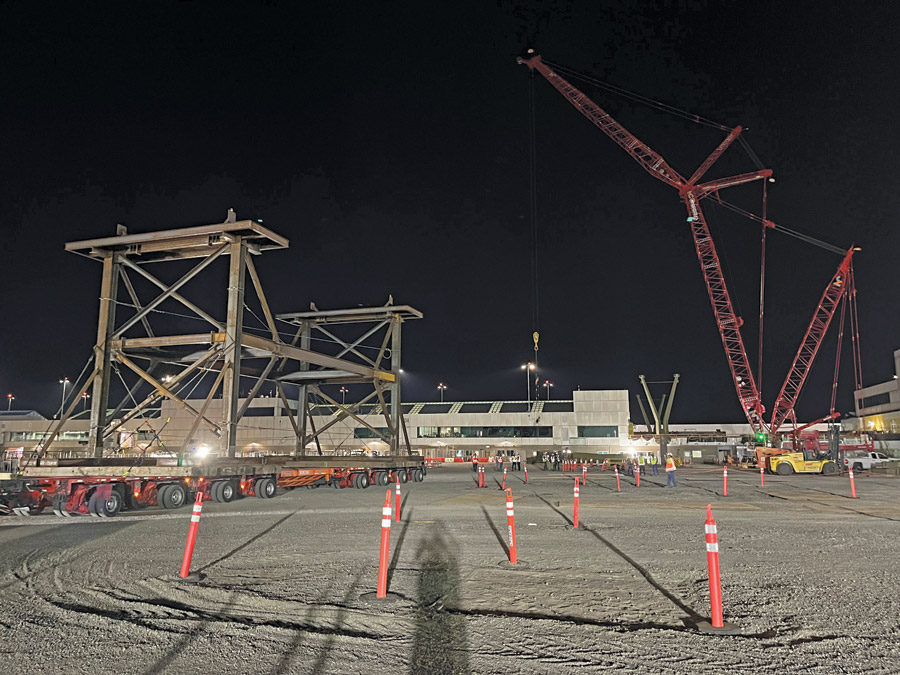 The size and scale of the Portland International Airport require detailed logistics to successfully and safely coordinate with ongoing operations.
Photo courtesy Port of Portland

“Installing a nine-acre mass timber roof over a busy airport with few to no disruptions has never been done before,” says Vince Granato, Port of Portland chief projects officer. “There will undoubtedly be challenges in the months ahead, but we are working with the best construction teams in the Pacific Northwest and have the support of our airline and tenant partners. It’s this coordination and collaboration that has allowed the successful transport and setting of massive steel columns thus far and will allow the same successes with the roof cassettes.”

Joe Schneider, account manager and senior vice president for the Hoffman Skanska joint venture, says the next several months will include a focus on orchestrating the roof work, “including setting the Y-shaped mega columns, then partially disassembling the new roof into modules before transporting and positioning the new roof modules at the terminal.”

The project, designed by ZGF and constructed by Hoffman Skanska with KPFF as the structural engineer, includes everything from remaking back-of-house operations to a completely new layout for ticketing and the lobby, all while making the space more energy-efficient via a ground-source heat pump that should reduce energy loads by 50% per sq ft.

The undulating curvature of the timber roof highlights the entire project.

“We are working with the best construction teams in the Pacific Northwest.”
—Vince Granato, Chief Projects Officer, Port of Portland

“You don’t get a roof like that without touching every single part of that building,” says Sharron van der Meulen, ZGF architect. “We had to deal with functional and operational aspects of the future.”

The complete overhaul eliminates the roughly eight buildings that were stitched together since 1954 to create the floorplate. Instead of the 200 columns there now in a seismically vulnerable design, the team worked to use 34 columns—half new and half being existing footings—to hold the 18-million-lb, 380,000-sq-ft roof while opening 100-ft by 125-ft bays between the columns to create flexibility in operational aspects.

The roof uses nearly 400 glulam beams—over 250 of them measuring 80 ft in length—paired with 40,000 lattice pieces atop 34 Y columns. The columns weigh about 96,000 lb each, fabricated from 1-in. plate steel and filled with thermal grout for fireproofing.

ZGF and the port selected timber—the roof features 3.3 million board ft of Douglas fir—for a variety of factors, including cost, constructibility, sustainability and as an opportunity to celebrate the region. 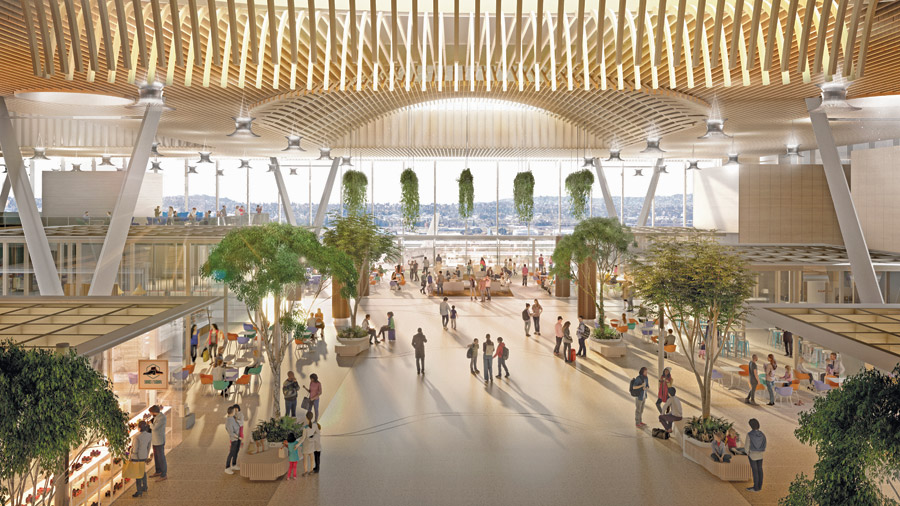 When completed in 2024, the Portland International Airport expansion should serve the travel needs of the region for decades.
Rendering courtesy Port of Portland

At Seattle-Tacoma International Airport (SEA), where nearly $4 billion worth of projects are planned over the next five years, there’s a constant flow of various stages of construction. “A stand-alone project in the airport is a challenge on its own, but with the size of the capital program we are taking on here in Seattle, we have had to focus on looking at the program holistically to make sure the project not only comes together and works in an end-state, but also through the construction phases,” says Greg Carey, assistant director for aviation project management at the airport.

SEA opened the new International Arrivals Facility in May, complete with the striking aerial walkway that was moved into place across an active taxi lane. That project included a new grand hall. The 450,000-sq-ft IAF—which features the world’s longest aerial walkway over an active taxi lane—is five times larger than the 50-year-old facility it replaced and features a 610-ft-long clear span and 85-ft vertical clearance that allows for space for planes to safely pass under. 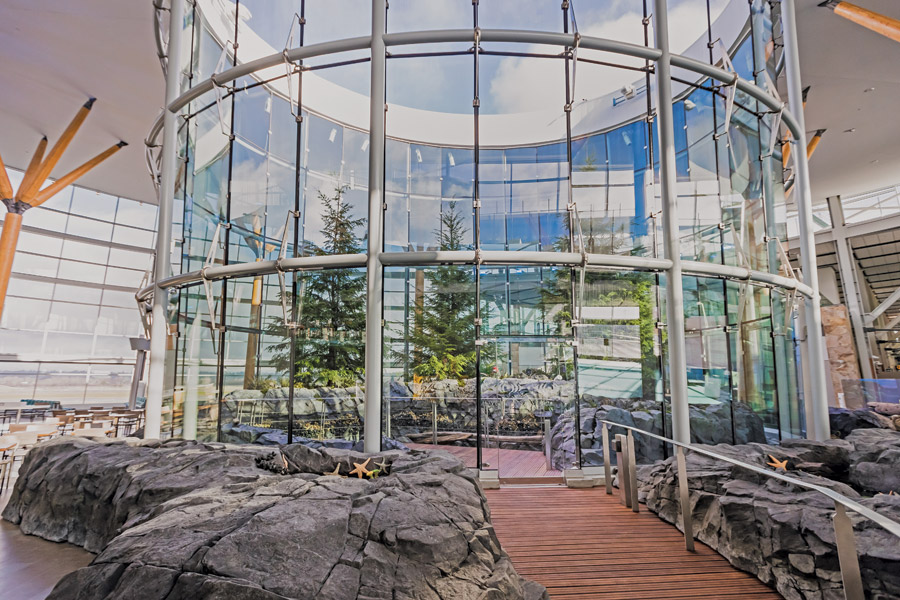 To ensure the construction didn’t interfere with airport operations, crews used the accelerated bridge construction method to build the walkway off site in multiple pieces. With 17 major prefabricated components, the 3,000-ton structure needed seven steel fabricators all within a three-hour radius of the project to create the components. With individual steel pieces weighing up to 170 tons and coming with unique angles, individual welds were up to 6 ft in length and 3.5 in. deep. The most complex prefabrication component, the center span, was built off site on the north end of the airfield, about two miles from the bridge location.

The design of a new secure international corridor along the face of the existing A Concourse allows eight wide-body aircraft gates direct access to the IAF with dual use for domestic flights, upping the building’s flexibility.

“Our projects are not just about delivery of the desired end-product but delivering in a manner that maintains a great experience for our travelers and does not interrupt operations.”
—Greg Carey, Assistant Director for Aviation Project Management, Seattle-Tacoma International Airport

In late 2021, the North Satellite Modernization Project opened and now the airport is focused on a C Concourse Expansion, Checkpoint 1 Relocation, the Central Terminal Renovation and a host of other projects, including restroom renovations, an automated parking guidance system throughout the garage and a back-of-house baggage optimization project.

In 2022, C Concourse will see the beginning of civil and structural foundation work while relocating existing building tenants into new locations in the airport. The first major construction on the expansion starts in 2023 with steel erection. “One of the biggest challenges will be logistics and phasing involved with building in one of the busiest areas of SEA’s air operations area,” Carey says. “We’re also challenged to maintain price certainty in a time of high inflation and supply chain disruptions.”

Carey says timing the projects within the capital program is tight, but project teams have focused on constant coordination and communication with stakeholders for planning and mitigating disruptions. “Our projects are not just about delivery of the desired end-product,” he says, “but delivering in a manner that maintains a great experience for our travelers and does not interrupt operations.” 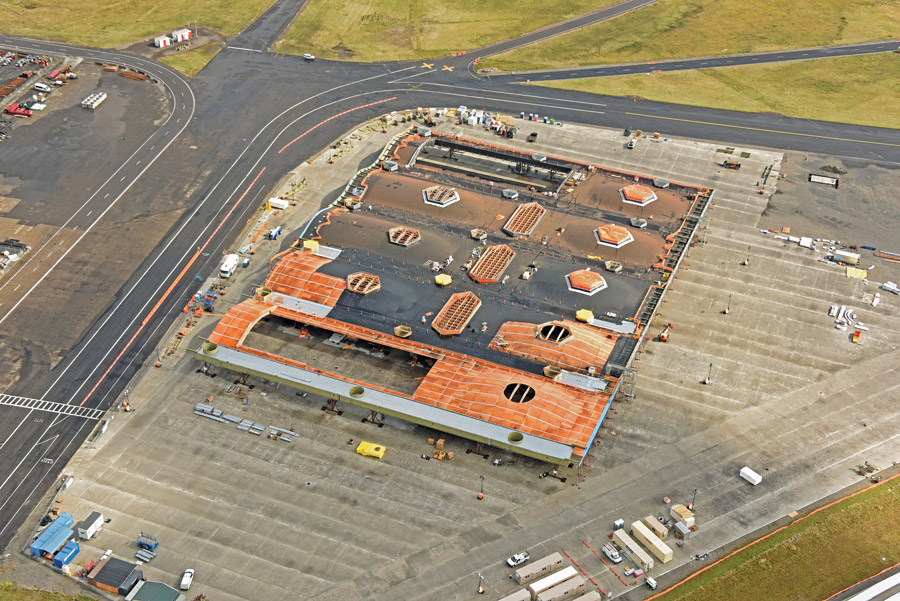 The nine-acre timber roof for the Port of Portland main terminal is being built across the airfield and will be disassembled and moved into place when complete.
Photo courtesy Port of Portland

The June opening of the expanded international terminal for both arriving and departing passengers traveling to and from Canada comes as part of the 300,000-sq-ft Pier D expansion, the largest at Vancouver International Airport (YVR) since 1996.

With eight new gates, a glassed-in island forest with access to the outdoors, new amenities and a heat recovery system to maximize energy efficiency and reduce carbon emissions, the opening caps off a construction project that began in December 2017 and finished in stages through 2021 and 2022.

“Opening the Pier D expansion is a milestone that we’re particularly proud of,” Tamara Vrooman, president and CEO at Vancouver Airport Authority, said in a statement. “This beautiful space reflects our unique sense of place.”

Ongoing work at YVR includes planning for a nearby cargo and logistics facility with construction expected to start later in 2022 and the addition of runway end safety areas over the next three years.