This website requires certain cookies to work and uses other cookies to help you have the best experience. By visiting this website, certain cookies have already been set, which you may delete and block. By closing this message or continuing to use our site, you agree to the use of cookies. Visit our updated privacy and cookie policy to learn more.
Home » Salt Lake City Airport Concourse Work Hits Cruising Speed
Mountain StatesMountain States Construction Projects
Digging Deeper | Airports

Few things at major hub airports are more important to busy travelers than smooth connections between flights. So it’s appropriate that Salt Lake City International Airport (SLC) has achieved a barely detectable handoff between the first and second phases of its decade-long $4.5-billion redevelopment program.

Included are a 22-gate east extension to the south concourse that will open in stages beginning in May 2023 and a 990-ft-long central access tunnel to the 477,000-sq-ft, 22-gate north concourse—another Phase 1 project built by the Austin Commercial/Okland Construction Co. joint venture and opened in October 2020.

“No rest for the weary,” jokes HDJV project director Kevin Fauvell, who adds that “the transition was planned to be seamless, and it worked out that way.” 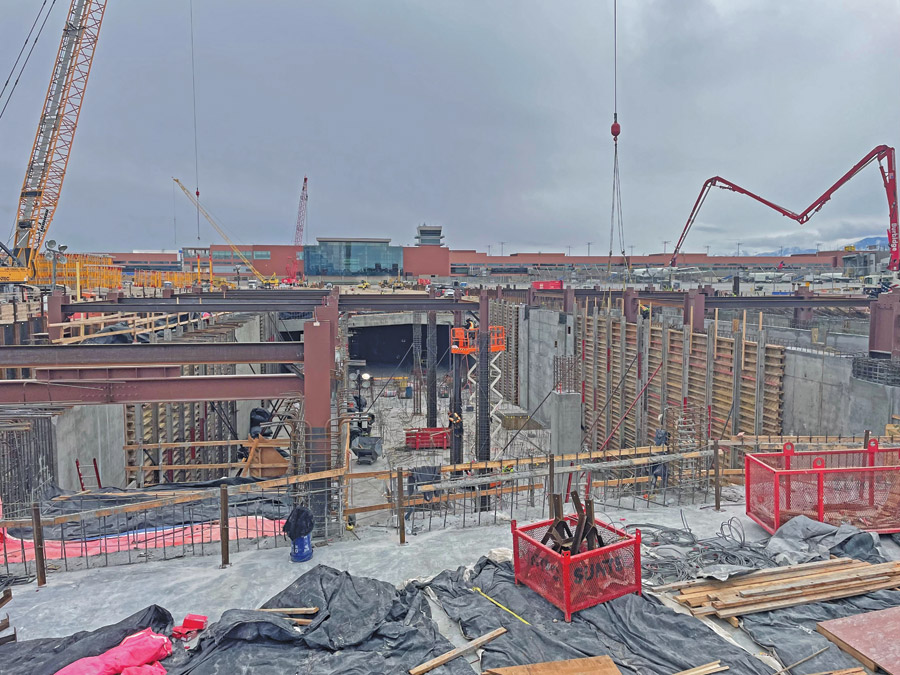 A new 990-ft five-bay underground connection between the north and south concourses can accommodate the eventual addition of an automated people mover system.
Photo courtesy of SLC International Airport

Just months before the Phase 1 opening, the urgency to sustain such a major aviation building program might have seemed incongruous with the uncertainties of a pandemic-depressed airline industry.

“Here we are, about to open a brand-new airport, and our passenger volume was about 10% of what it had been,” recalls Bill Wyatt, executive director of the Salt Lake City Dept. of Airports. Although SLC worked with the airlines to build as much flexibility into the Phase 2 construction plan as possible, such as incorporating “off and on ramps” to pause and restart work if needed, 2020’s gradual trend toward normalcy provided confidence to keep the program at full speed.

“We priced it out, and the airlines approved,” Wyatt says.

SLC’s rebound has been so strong that earlier this year, HDJV was authorized to begin a $333-million Phase 3, which includes the first eight gates of what will eventually be a 22-gate east extension of the north concourse, a central connecting plaza to that facility’s west gates and the interior finishes and systems in the central tunnel. 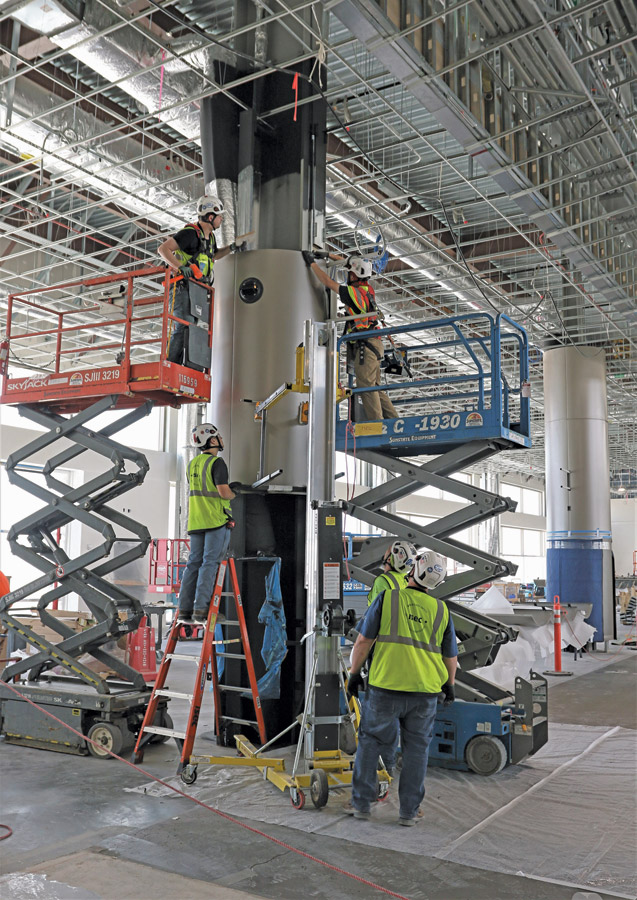 The concourse design lends itself to easy expansion, including incorporating the evolving mechanical, electrical and information technology systems as new gates are added.
Photo courtesy of SLC International Airport

A Sense of Place

While the new concourses’ linear layout is better suited to incremental need-driven expansion and efficiency than SLC’s previous configuration of finger-style concourses, the HOK-led design team sought to incorporate a sense of place into the buildings.

“The problem with hub airports is that they tend to evolve and often end up being rather generic,” explains Matt Needham, director of aviation for HOK, which led the design of SLC’s redevelopment program. Because SLC is, in essence, a brand-new airport, “We wanted to do what we could to make sure passengers know where they are,” he says.

Though the nearby Wasatch Front offers a postcard-perfect backdrop, Needham says it was important not to overdo windows and compromise the project’s ability to achieve LEED Gold certification.

“Instead, we use daylight harvesting, with automatic controls on the windows to adjust tint during the day,” he says.

Another advantage of the design, Wyatt adds, was that few adaptations were needed to accommodate post-COVID realities. “We upgraded the filters to MERV 14 and added sneeze guards to counters and other places where stationary workers deal with passengers,” he says. 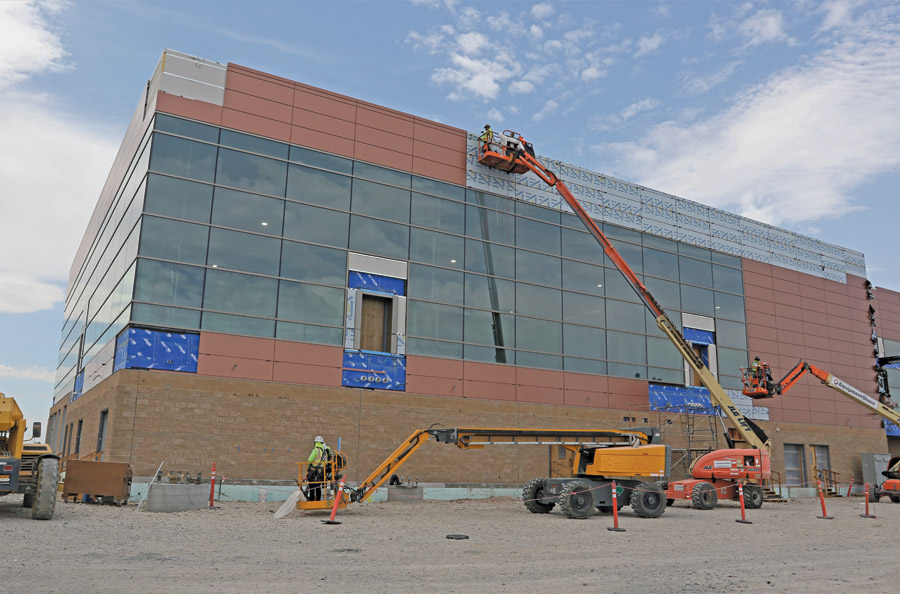 Tearing Down, Building Up

HDJV’s first major task under Phase 2 was removal of most of the last vestiges of the “old SLC” to make way for the south concourse expansion. The newly decommissioned terminals and concourses and a parking deck were demolished in six months, creating 280,000 tons of material, of which 85% was reused. Concrete was ground into onsite backfill material while steel and other components were sent to offsite recycling plants.

Mike Williams, hired by SLC in 2012 to serve as an independent program director for the redevelopment, notes that despite decades of use, the cleared site for the terminal expansion presented few significant underground obstacles to continuing construction.

“You always plan for the unexpected, especially with an old airport that’s been around for a long time,” he says. “All we encountered were a few pockets of fuel-contaminated soil around the old concourses.”

“We wanted to do what we could to make sure passengers know where they are.”
—Matt Needham, Director of Aviation, HOK

As with Phase 1, the north and south concourse extensions and central tunnel required ground stabilization measures necessary to accommodate SLC’s location in a seismically active former lake bed. Hundreds of 3-ft-dia holes laid out in 10-ft by 10-ft grids and drilled 45 ft deep are pressure filled with small stones to prevent liquefaction in the event of an earthquake, such as the magnitude 5.7 event that rattled Salt Lake City in March 2020.

The building and tunnels are founded on a combination of driven composite and H-piles, most averaging a depth of 65 ft to 75 ft, Williams says. The south concourse extension will contain an estimated 5,800 tons of rebar structural steel and 17,657 cu yd of concrete, while the Phase 3 extension to the north concourse will require 3,000 tons of steel and 8,500 cu yd of concrete.

Phase 2’s other major element, the new central tunnel, will augment an existing mid-concourse connecting the north and south concourses.

Constructed using a cut-and-cover method, the 106,140-sq-ft tunnel’s passenger walkway cell will be highlighted by “The River,” a full-length membrane sculpture made up of individual aluminum-framed “fins” wrapped with a fabric material. Separate tunnel cells are provided for high-speed baggage systems, central utility plant distribution and the eventual addition of automated people movers.

“Those cells are designed to accommodate almost every type of technology available, providing flexibility for the airport’s long-term decision-making,” HOK’s Needham says.

With SLC’s water table only 7 ft below the surface, excavating 65 ft deep to construct the tunnel required sheet piles and an extensive dewatering system. Less than a year after the first bottom slab was placed in July 2021, Fauvell says, the tunnel was complete and backfilled.

“By the end of the year, we should have the surface paved and fully open as a taxiway between the concourses,” he adds.

“The transition was planned to be seam-less, and it worked out that way.”
—Kevin Fauvell, Project Director, Holder Construction & Big-D Construction Joint Venture.

Williams says that construction has so far been able to stay ahead of both industrywide supply chain issues and labor shortages in the busy Salt Lake City construction market.

“We recently had an issue with cement powder, which fortunately seems to be easing,” he says. “However, the next year or two could be challenging. As soon as awarded, we work with trade contractors to get all submittals and approvals done as quickly as possible so they can order materials.”

Fauvell adds that the team keeps close watch on the status and movement of those materials, particularly since 40% of the project’s steel is coming from overseas.

“The airport has been good about allowing the trades to bill for more stored material and makes sure what we need is here,” he adds.

Unfortunately, the project has not been immune to tragedy. Last November, a worker for subcontractor SoNev Construction was fatally injured while performing equipment maintenance away from the construction site. SLC says the Occupational Safety and Health Administration completed its investigation but has yet to take any action. 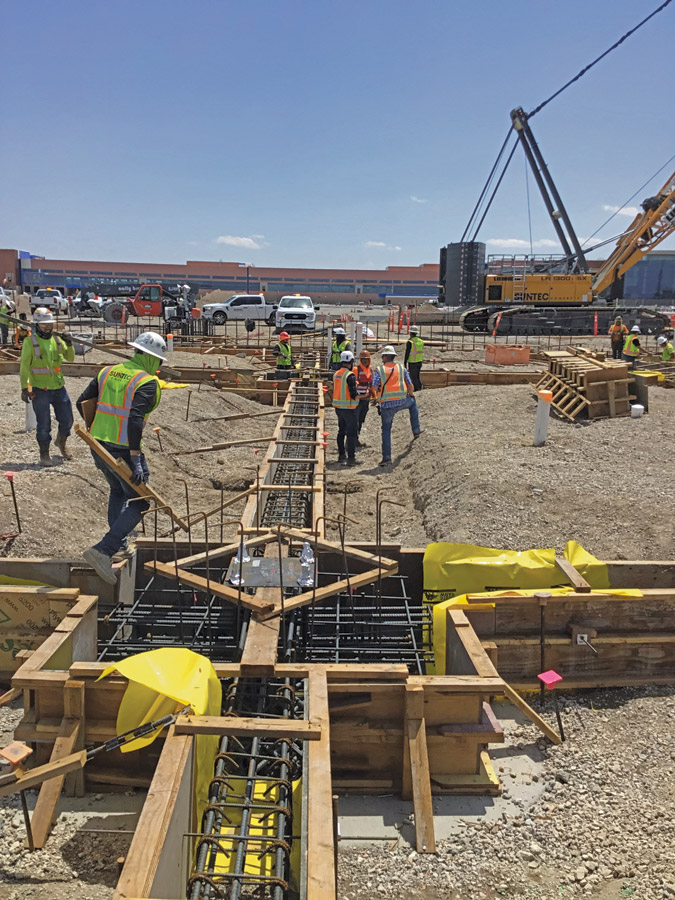 Plans call for the first four gates of the south concourse extension to open in May 2023, with the remaining 18 gates to follow later that year. The staggered opening of the north concourse’s Phase 3 gates in 2024 and 2025 will enable the airport to smoothly phase out the last of its temporary “hardstand” operations, where passengers access parked aircraft via shuttles. The remainder of the north concourse’s east side extension, being designed by HOK, will give SLC a total of 94 gates—a capacity that Wyatt says could be achieved by 2027.

“In terms of airline seats in the market, we may be the most recovered airport in the country,” he says. “The airlines have expressed a strong interest in proceeding with the continued expansion.”

Fauvell calls participating in construction of the nation’s first major airport in a generation “a once in a lifetime opportunity” and praises the teamwide cooperation. “We didn’t always agree, but we always found a resolution,” he says.

Wyatt adds that SLC’s ability to reinvent itself, literally and figuratively, and nearly double the number of jet bridges in just seven years is a credit to the administrative structure that oversees such a massive multi-faceted construction operation.

“Building a structure of communications that keeps us up to speed and puts decisions in front of us as we need to make them has been invaluable,” he says. “Had we tried to manage construction without this structure in place, I don’t think we’d be open today.”

Adds Williams: “When you have a big machine like this moving, you don’t want it to stop.”